The week ended with a noticeable risk appetite stretch, pushing a few noteworthy breakouts and earning the major US indices fresh record highs. And yet, through the advance, we still see the hallmarks of a hollow progress that reflects a lack of conviction and more a speculative opportunism. The progress is undeniable. The Dow and S&P 500 for example earned their respective records on both a daily and weekly close basis. This has also cleared upper bounds of constraining congestion patterns (rising wedges). What's more, the bid has spread to other regions and asset classes, breadth that raises the potential for conviction measurably. And yet, chop continues to prevail. Trading at record highs by short-lived gaps without material momentum invites the risk that pervasive concerns over fundamental value can turn into outright fear and the motivation to deliver. There is not always safety in numbers. 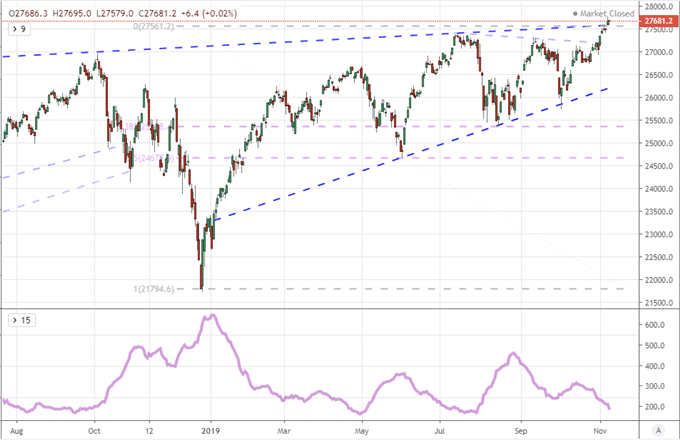 While I will always monitor the balance of greed and fear to gauge a bearing on the underlying risk profile of the market, I find it critical to keep close tabs on the conditions of the market in the background. There is good evidence that complacency is doing more to convince investors to proceed than genuine rates of return or anticipation of substantial growth moving forward. Yet, it can be difficult to put a measure to how extreme the deviation from fundamental reality really is. Beyond record highs, the comparison to implied risk-reward measures (G10 10-year yields over FX volatility) and measures like projected earnings growth; you can use certain measures of exposure. While leverage is excessive in a number of corners, the most extreme reading on my radar at the moment is the surge in short interest behind the VIX futures. Despite trading at an exceptionally deflated level at 12 and the 20-day ATR hitting the lowest since January 2018, speculators have built up a record net short exposure to the index. Whether expecting it to return to 10 or simply conforming to seasonal norms, that is beyond a risky presumption at these levels. 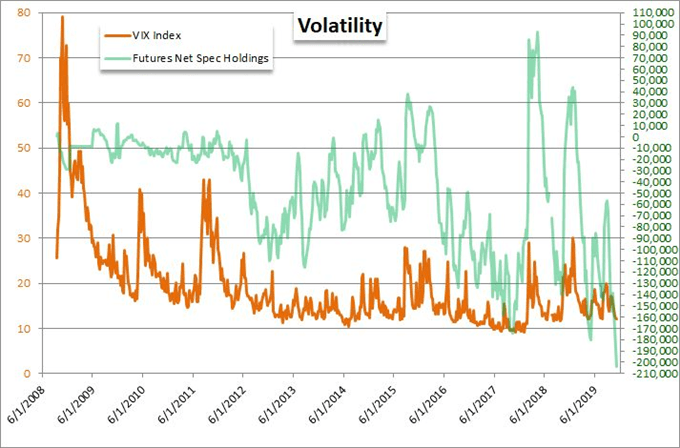 Perhaps the most convincing bit of risk appetite support that we were shown through the end of this past week was the US equities market's persistence despite an unfavorable check in the very headlines that have supported the climb. Through rumors and sources this past week, the market has been led to believe that the United States and China are nearing a first serious milestone in negotiating a de-escalation of their ongoing trade war. The movement on the stalled Phase 1 deal talks was the suggestion that the US was considering rolling back some of the existing tariffs it has placed on China. Yet, once again, President Trump stirred the pot again when he said Friday that he had not agreed to anything yet. That was not a complete denial, but we are currently running on rumors building traction on a slippery track. In the meantime, Beijing has intimated through sponsored media that it would only sign off with a rollback.

Looking out over the coming week, it would be fair to expect trade war headlines will continue to play a significant role in the passive bid or stoking unexpected bouts of volatility. Assuming US-China headlines would be equivalent to watching a pot of water boil - explosively - but there are certain milestones to watch which will remind us that the global economy is steadily absorbing the impact of nearly two years of anti-trade policy. There are plenty of trade updates due for example following China's report of declining exports and imports, along with a run of important Chinese financing data. What's more, trade is not just an issue between the two largest individual economies in the world. Thursday, the Trump administration will hit a deadline to decide whether or not it wants to pursue tariffs on imported autos. It is possible that this deadline will pass without a resolution to be used as a bartering chip, but be mindful of the risk. Its adoption would carry extreme risk implications. 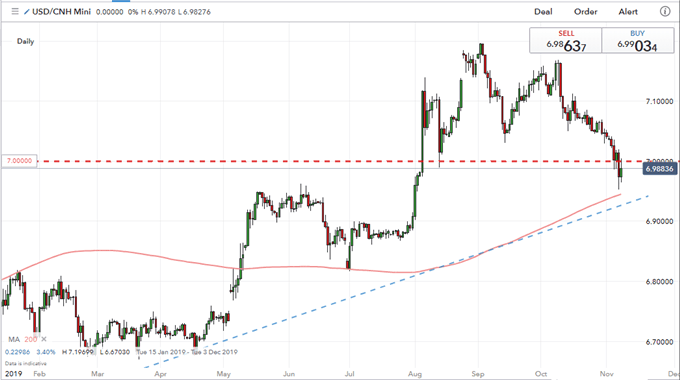 Alternatively, if we are to assume that the most potent theme in the coming week is the one that is backed by the greatest number of targeted, high-level event risk; it would be wise to keep tabs on growth trends. There have been numerous warnings about the state of the global economy moving forward by numerous groups including the IMF, World Bank and major central bank. Those red flags have been conveniently overlooked - more likely outright ignored - but if the warnings continue, eventually the ability to downplay the pain will evaporate. There is a run of important data ahead that can be interpreted as a big-picture economic reading, but I will specifically watch the German, UK, Japanese and Russian 3Q GDP readings. My top concern will be Germany's figures as Europe's largest economy faces a very real chance of signaling a technical recession. 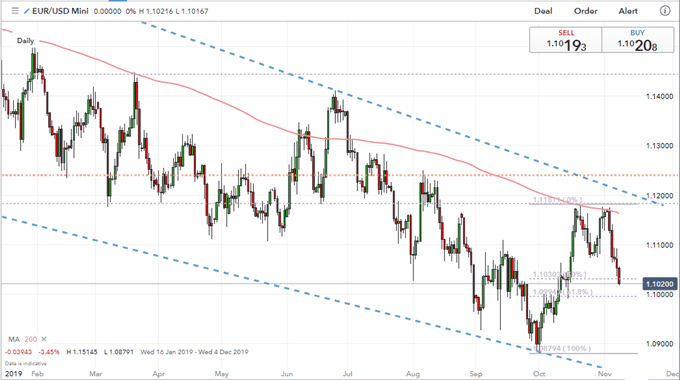 Monetary Policy Has a Role to Play, Whether to Confirm or Disprove Dollar Strength

Another opportunity to generate volatility in the FX and capital markets in the week ahead is development through monetary policy. We may not be there yet, but we will soon be to the point where no change in the availability of cheap funds from the world's largest central banks could trigger a broader risk move. The most targeted central bank event is the Reserve Bank of New Zealand (RBNZ) rate decision. Swaps place the probability of a 25 bps rate cut at over 65 percent. It is at this point that we need to ask again, 'why is the Kiwi considered a major currency?' The answer is that it is a high yielding, high sovereign credit quality currency. As the benchmark rate inches closer to zero, the reasons to keep capital in the currency evaporate quickly. 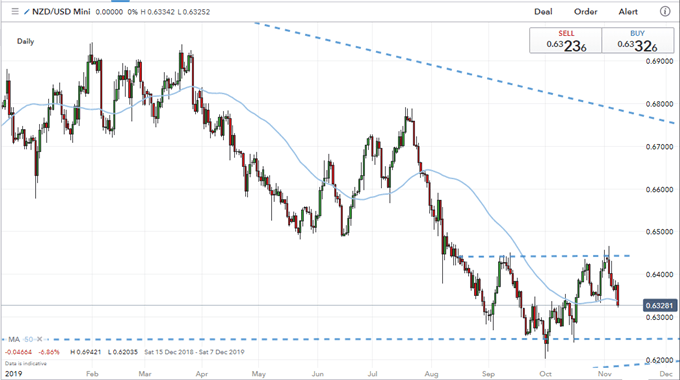 While there are a range of other central banks that will see their course of intent nudged by event risk and speeches, it is by-far the Dollar that is facing the longest list of important updates. On the data side, we are expecting inflation update among other key insights. That said, it is Fed rhetoric that will be of most interest to me. There are a host of FOMC speakers set to speak, but it is Chairman Powell's testimony in Congress that holds the greatest potential. As it stands, the ebb in trade war fears has helped lift rate forecasts such that there is an actual rate hike forecasted through the end of next year. Beyond a simple view of Fed strategy, such a path would insinuate no economic or financial tumult over the next 12 months and that is frankly unbelievable. 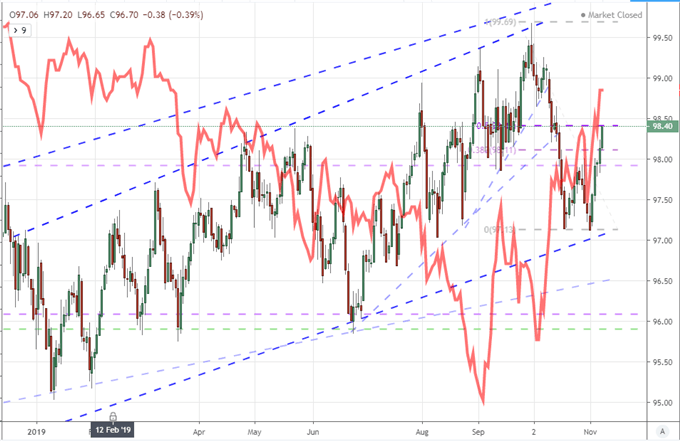 Among the majors, there is some interesting technical potential to draw from. When I am looking for options, one of the first things I do is to evaluate what kind of general backdrop we are dealing with. Trends are infrequent and pace is all but absent where there is traction to be found. Consider USDJPY which has attempting to clear range resistance and turn the market to rally. That break has shown little-to-no follow through on liftoff. GBPUSD is perhaps more appealing as it is shifting into a broader range, but the Sterling is a complicating addition to its backdrop with a recent history of throttling all movement with little warning. The most appealing convergence of technical, fundamental and conditional elements is arguably AUDUSD. Trade and risk orientation tend to align with big picture techs while the path of least resistance is already the prevailing course. 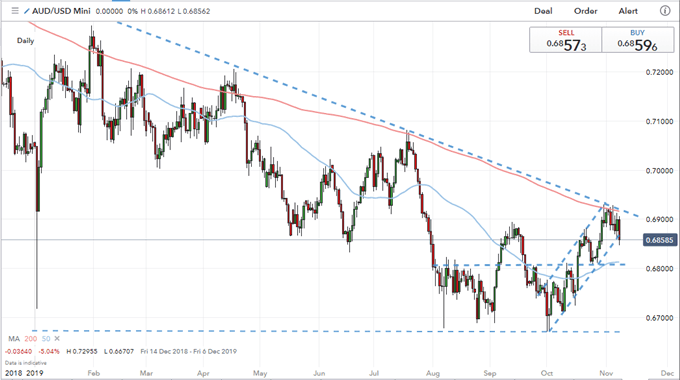