Another Trade War Headline, Another Short Charge In Risk Assets

I was fully ready this past session to see interest in global economic health top headlines and the natural current of risk trends to carry capital markets along. Instead, unexpected reports of progress on the US-Chinese trade negotiations once again jolted speculators to attention with an unmistakable risk appetite run. Technically, the developments Thursday looked a lot like what we witnessed at the very beginning of the week. For the US-based markets - both local indices and ETFs that represent market types other than equities - opened with a strong favorable gap higher. Among the stock benchmarks, the most impressive effort on my charts was from the Dow. The blue-chip index had already moved to a record high like its top shelf peers, but it hadn't yet cleared a large rising wedge formation that had been forming since early 2018 - until this past session.

Chart of Dow Index and One-Day Rate of Change (Daily) 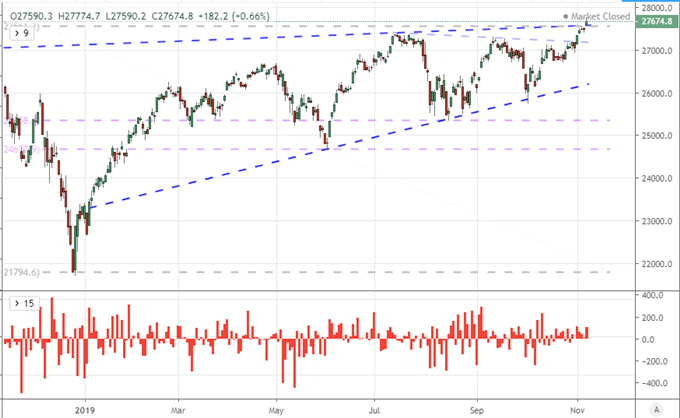 Yet, another common feature of the trading landscape this past session from earlier this week was the lack of follow through after the gap higher. Whether the Dow, the S&P 500, all world equities (ACWI), emerging market, carry trade or other buoyant risk-sensitive assets; the lack of conviction was the same. Was this just the natural limitation of optimism with one theme showing some light through the cloud cover against a host of other systemic issues or perhaps it was the nature of the favorable wind itself? It is probably a mix of both factors. The headline that stirred bulls was based on reports that the US was willing to roll back existing tariffs (the US has a hefty tax on $360 billion in Chinese imports) should the trade deal move forward. That is a move towards compromise by the Trump administration. It was, however, dimmed when follow up reports - initially from Reuters - suggested there is strong internal debate within the White House over this 'capitulation'. Given the sudden breakdown in talks following the G20 meeting in the Summer and the recognition that there have been no permanent improvements in this course, a health dose of skepticism is well deserved. If you aren't already, add USDCNH to your watch list. As it drops, the perception of trade wars and the Chinese policy efforts are more likely improving. Given how far this can reach on a speculative basis, this is a factor for all traders to watch.

Chart of USDCHN with 100 and 200-day Moving Averages (Daily) 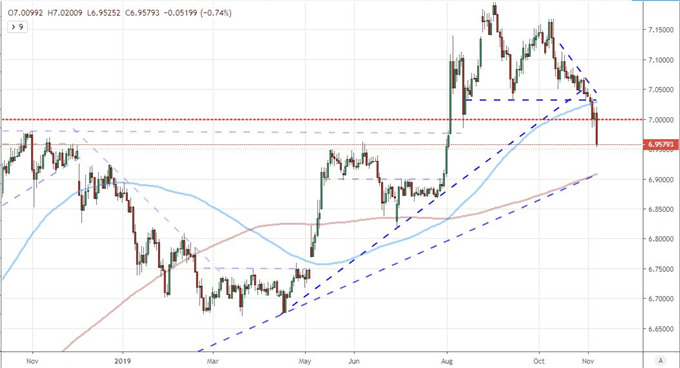 Meanwhile, Growth Metrics Continue to Work Against the Risk Run

Where trade wars have offered unexpected steps towards improvement over time, we have had more reliable deterioration in data around economic health recently. This past session there was a prominent update on economic health for the Euro-area. While the German industrial production figures for September offers tangible reason for concern, the real heft would come through European regional updates. The ECB's monthly bulletin was loosely encouraging, but the European Commission's own semi-annual economic update was anything but. The Eurogroup forecast left us with a moderate downgrade in the 2019 forecast (1.1 percent versus 1.2 percent growth) but it was the outlook beyond the immediate performance that is truly worrying. The 2020 projection was lowered from 1.5 to 1.2 percent growth and one of the largest collective economies in the world is expected to level out rather than recover from its restraint. Beware the global outlook if such a critical player is struggling this blatantly. 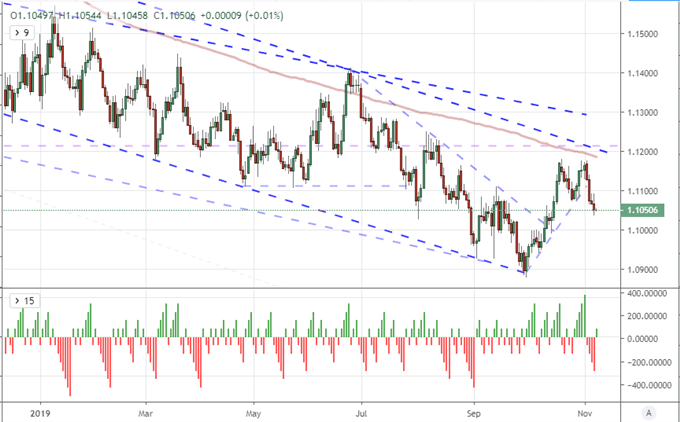 Another economic update, on the docket this past session was delivered by the Bank of England through its quarterly inflation report. The central bank unexpectedly raised its forecast for growth this year from 1.3. to 1.4 percent but it would lower its outlook for 2020 from 1.3 to 1.2 percent. There are a few economic-related figures on deck for the upcoming session, but the most impressive figure to watch from the global docket is the United States' consumer sentiment report from the University of Michigan. Given the level of influence for this important economic group (the largest collective spender in the world), intent here could signal growth for the world moving forward. Would it translate into meaningful price action though? That remains a high barrier - especially when it comes to throttling enthusiasm. 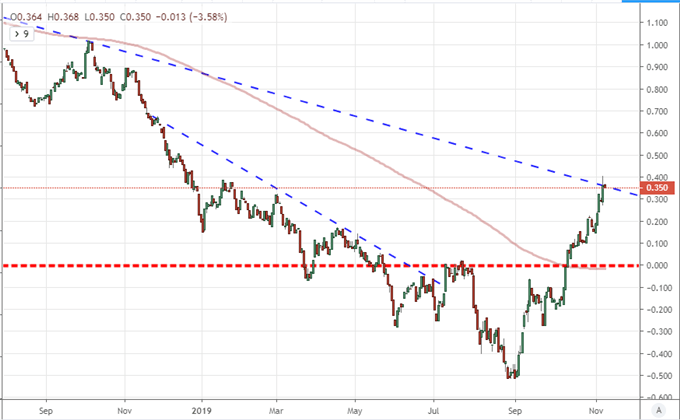 Outside of the systemic, there are meaningful volatility opportunities for certain segments of the market. Referring back to the BOE rate decision, the central bank's actual policy announcement proved an unexpected market mover. The UK policy authority wouldn't change the 0.75 percent setting to its overnight rate. Nonetheless, two MPC members calling for a cut was clearly unexpected. The Sterling dropped after this vote count was reported, but it wasn't enough to turn a GBPUSD drop into a full reversal. 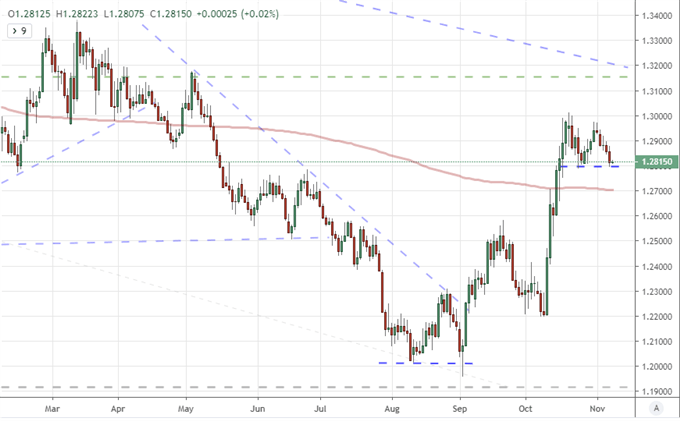 Another remarkable move to keep tabs on is the Greenback's own charge forward. The ICE's DXY Dollar Index rallied smartly this past session not because of any risk aversion or rote response to scheduled event risk. Rather, the spark for the world's most liquid currency was a side effect of the systemic influence of trade war optimism. We have seen the Fed - among many, many other key policy groups - list the economic fallout from external risks (essentially code for 'trade wars') as a principal fear. Removing that roadblock could significantly reduce the potential of a further rate cut. Is that enough to keep the Dollar rising though? Probably not. This is more a technical rather than sentiment move, so keep optimism in check. 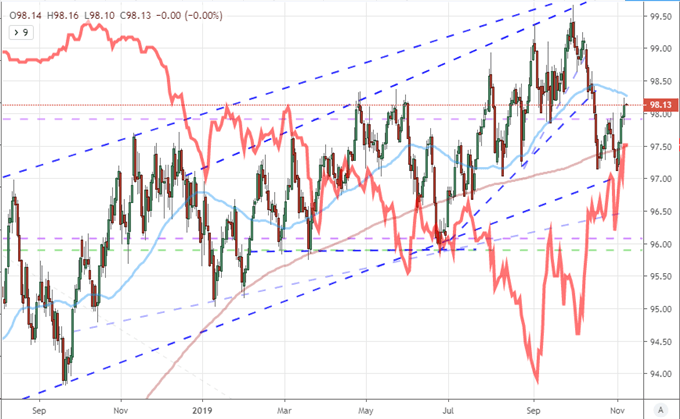 Finally, a benchmark of exceptional provocation to watch moving forward is the slip from gold. The precious metal dropped smartly this past session thanks to the perceived improvement in trade conditions,and the move arguably cleared the bottom of a familiar wedge with Thursday's price action. That said, we have seen a run of technical breaks from this commodity of late and there has been no true follow through on any of this chart-based sparks. Set reasonable assumptions - especially when the subject of the inquiry is a safe haven that is particularly positioned to reflect financial stability and the depreciated value of major currencies. 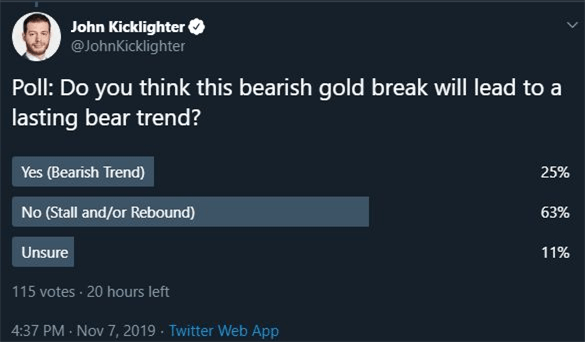