Risk Trends Flounder When the Data Actually Supports a Climb...

Speculative appetite lost serious traction this past session. That should not be taken a sign that the market 'has to reverse', but it should raise concerns over conviction that is short supply despite the progress of capital market benchmarks. What truly surprises me in this past session's listing was the observation that the fundamental developments that the market was merely anticipating as justification to keep climbing - trade war improvement and improved economic outlook - actually found purchase this past session. When bad news is played down to allow speculative momentum to continue, it can speak to an underlying bullish bias. Yet, when good news cannot offer reasonable amplitude to the prevailing move, there is something amiss. Either the markets have suddenly shifted bias, grown skeptical of data in short order or there is no common undercurrent of conviction.

It is difficult to miss the dramatic loss of traction from Monday to Tuesday. Following the host of high-level, bullish breakouts and the drive to record highs for US indices to start this week, we have almost no progress on the follow though. The pattern is a familiar one whether we look across global equities (AWCI), emerging markets (EEM) and carry trade (ie EURJPY). The most remarkable example of wheels spinning comes from the key US indices. The S&P 500 has carved out a particularly narrow 48 hours though Tuesday's close - in fact, it was the smallest two-day range as a percentage of spot price since September 24, 2018. That is in part a factor of how high the benchmark is, but it also speaks to the lack of conviction that we face despite the record highs we have forged. It is tempting to reference September 2018 or late-2017 as indication of an imminent reversal, but this should only be interpreted as a loss of pace. Should this persist, the pressure to collapse under its own weight will grow. So now we await catalyst or atrophy. 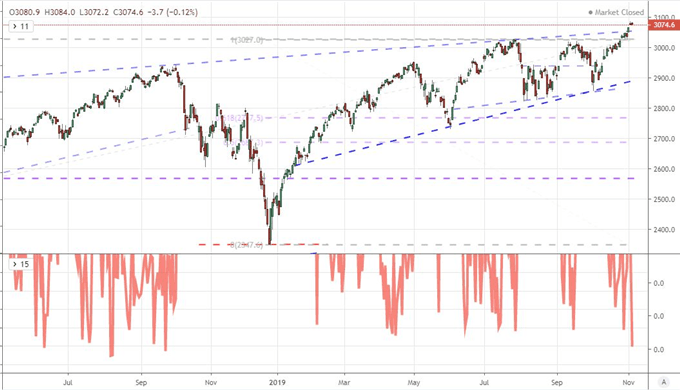 Trade Wars and Growth Outlook Beyond the Headlines

What made the market's lassitude so remarkable this past session was the presence of supposedly favorable fundamental winds. Perhaps the most pronounced headline support would come on the basis of an improved view of US-Chinese trade relations. The reports over the weekend and into the opening 48 hours of trade have fostered a sense of relief - I believe still premature. Reportedly, Washington and Beijing have been nearing a compromise with one of the only material sticking points being a location to sign a 'Phase One' deal. However, the criteria and skepticism have once again showed through. It has been reported that China is demanding a rollback of existing tariffs for approval and state-sponsored SCMP saying outright that China needs firmer commitments from the US President on the existing taxes. In the meantime, USDCNH has dropped back to 7.0000 this past session which is significant. This could be taken as a sign of genuine improvement, but I am skeptical that it is a natural market response. A good sign of this is the sharp disparity between the Dollar (DXY) and the exchange rate just recently. They can deviate, but the Greenback is still the far more liquid currency and it did very well this past session. 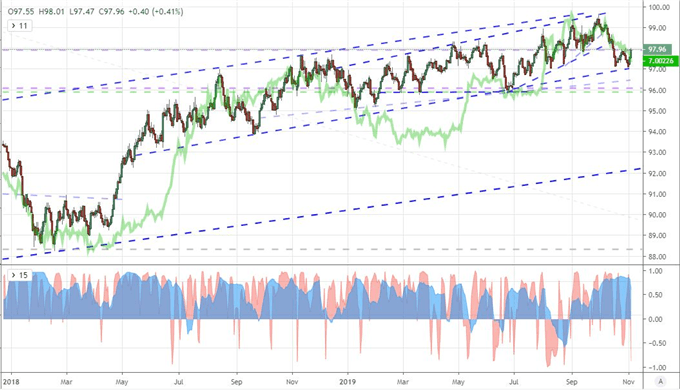 Another source of potential support for bulls that were just waiting for a backing wind was the US service sector activity report for October from the ISM. Accounting for over three quarters of output from the world's largest economy, the figure bested expectations that were already set higher with a 54.7 reading that surpassed the 53.4 forecast and 52.6 previous reading. That doesn't fully offset concerns elsewhere - such as the contraction in manufacturing reported by the same group as recently as last week - but it does beat back fears of impending recession. One of the favorite speculative readings as of late, the US 10-year to 2-year and 10-year to 3-month yield curves continued to climb. Elsewhere, the Chinese composite figure from Caixin notched higher while the UK's figure edged up to breakeven (50). Keep an eye a few lower level growth-related reports today like the Germany factory activity report, but there are more hefty updates due next week. 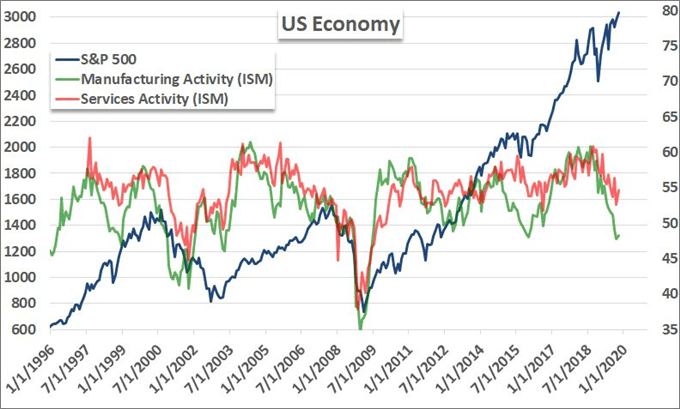 On a day where risk assets were spinning their wheels, there was a substantial rally from the world's most liquid currency. The Dollar has been the 'odd man out' these past months, struggling for meaningful traction either bullish or bearish. From the DXY this past session, the extension of a bounce Monday confirmed the best two-day charge in a year. This wasn't a charge for safe haven demand nor do I think the service sector figure would signal that well for currency but not equities. Other data offered up a trade deficit that shrank but largely because Americans throttled consumption and the lowest level of job openings reported by JOLTS in a year-and-a-half. We may have a situation where long-term interest are under consideration as Fed Fund futures through December 2020 are pricing in a 57 percent probability of at least one 25 basis point hike. I don't think that is what is at play here though. It is more likely that this is a 'path of least resistance' hold at a channel floor. 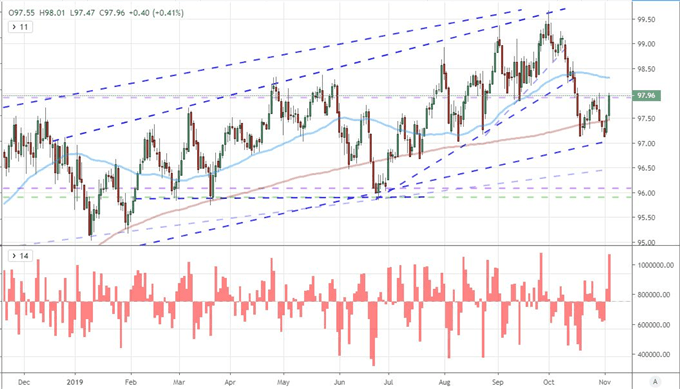 It is important to distinguish this one way or the other as follow through depends heavily on motivation. Consider that when you compare a situation like USDJPY which is attempting a bullish breakout versus EURUSD, AUDUSD or USDMXN which are simply turning within their established patterns. While all of them have followed a Dollar bid this past session, if there isn't a strong drive behind the market to keep it running, congestion patterns are far more appealing. 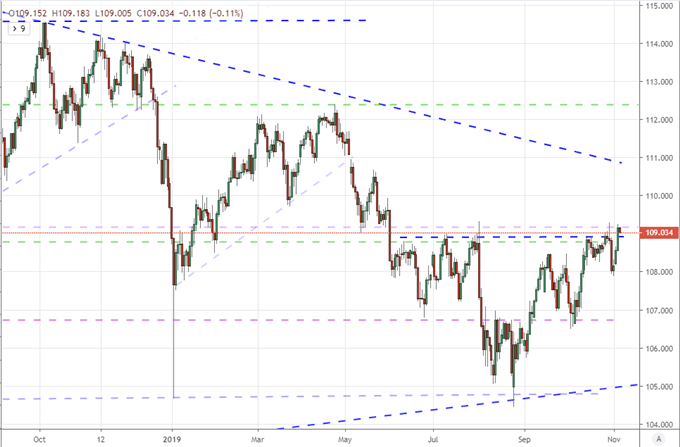 Elsewhere, there is some moderate volatility stirring in other areas of the market. The RBA hold reaction was notably restrained so it didn't offer the kind of traction in a AUDUSD reversal that could have been under the right circumstances. The New Zealand jobs figures out this morning disappointed enough to raise the probability of a rate cut at next week's meeting from 54 to 62 percent. The Canadian Dollar wasn't a big mover this past session, but perhaps the manufacturing activity report from Ivey later can offer some useful sparks for pairs like AUDCAD. 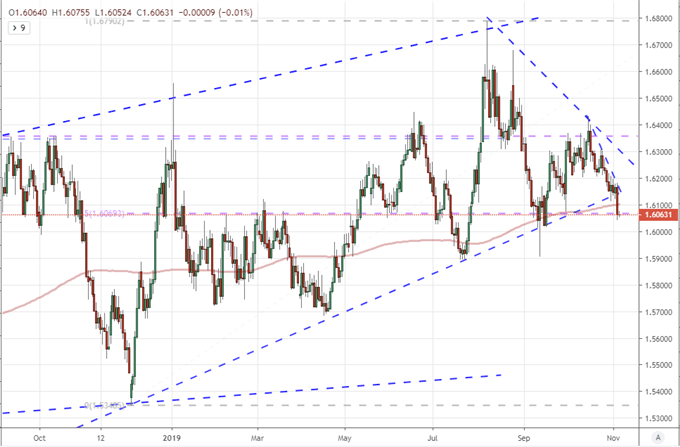