More Than Pricing in Perfection: S&P 500 and VIX

It was difficult to miss the enthusiasm with which the markets closed out this past week. There was measurable progress in most risk-leaning capital market benchmarks throughout the past week and for much of October. The milestones however, seemed to accumulate slowly with bullish congestion breaks from the all world equity index (ACWI), emerging market ETF (EEM) and Treasury yields among others; and momentum never seemed to genuinely show through. The suspicion such restraint may have drawn was temporarily suspended though through the end of this past week when the S&P 500 led the US indices on a charge to fresh record highs. Not all of the key benchmarks earned the distinction - like the Dow and Russell - but the SPX more than made up for the lack of conformity. A gap higher on the open was followed by a candle that opened on the low and closed on the high, a move that would also ultimately clear the upper bound of a long-term ascending wedge. 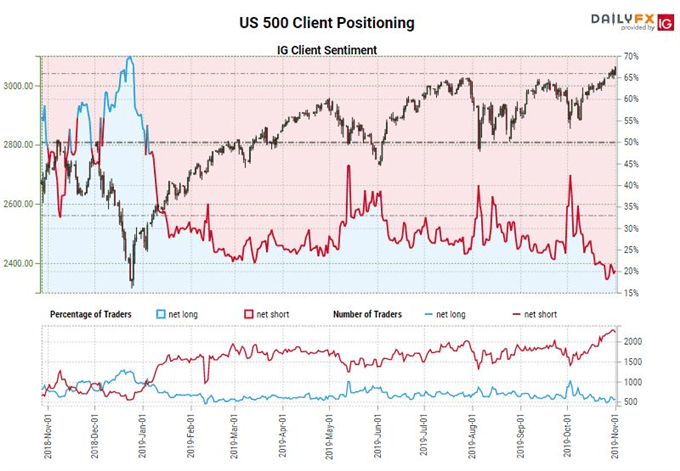 I have been of the mind that the risk positioning behind the markets has been extreme for some time. I am not so idealistic that I would think that what market participants are willing to pay should directly reflect underlying measures of value. That said, the premium or discount to this baseline can only go so far so long as there isn't a steady stream of compensation such as effective monetary policy to bridge the gap. It can be difficult to gauge when speculative reach is 'too far'. Yet, I think a particularly remarkably signal of reckless complacency is the speculative positioning behind VIX futures. With a record net short position of nearly 188,000 contracts, there is an extraordinary appetite to short a benchmark that is already pushing the bounds of reasonable lows. Talk about pricing in perfection... 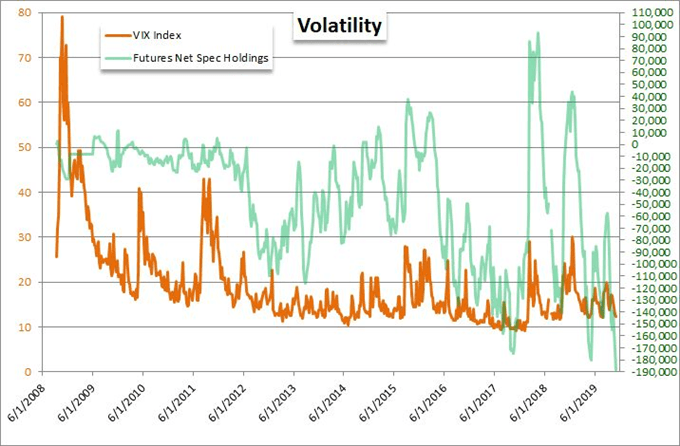 The Potential of Support and Pressure Among the Major Themes

Though we are dealing with a few technical breaks of significant weight, the conditions for follow through are fully dependent on at least a serviceable fundamental backdrop to fend off serious concern. That will prove increasingly difficult given our current conditions. Through the end of the past week, perception of improved trade conditions seemed to be leading the charge for enthusiasm. There were reports from Chinese officials that they had reached a 'consensus on principles' in their negotiations with the United States. It was important that this would come from the side that was reportedly concerned that its counterpart would not live up to its commitments. This said, there have been far too many false starts to expect that words will trump actions. Expect skepticism to build again should clear terms not be drawn up for President's Xi and Trump to sign soon. Furthermore, don't forget that the EU is still considering retaliation for the United States' tariffs on products such as European agricultural goods and President Trump has until the 14th to determine whether to move forward with auto tariffs.

Chart of China FXI ETF with Rate of Change (Daily) 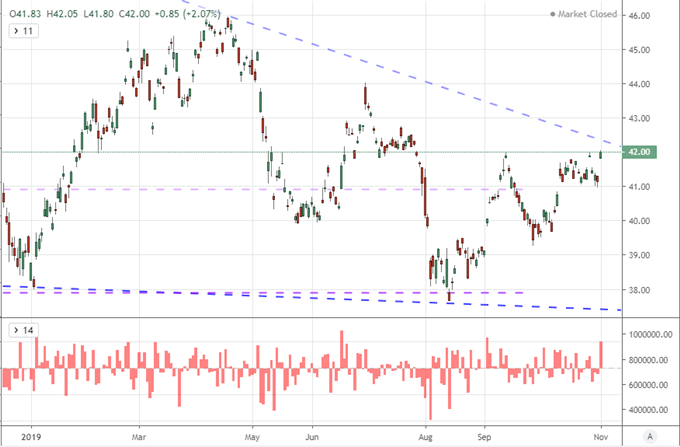 A less convincing fundamental theme to place our bullish convictions on is the stature of monetary policy. To close this past week, the US reported October nonfarm payrolls with solid results. The net addition of 125,800 jobs to the economy bested the 85,000 positioned forecasted with the 3.6 percent unemployment rate just a tick off multi-decade lows and 3.0 percent wage growth a meaningful pace. Yet, the favorable economic implications this would imply would also do nothing to push the Fed to cut rates for a fourth straight meeting. The real pressure in this theme is maintaining the belief that stimulus and low/negative rates can compensate for lackluster growth for keeping capital markets moving higher. That is a seriously dubious expectation given so many official players are stating monetary policy is reaching its limits and needs fiscal policy to keep the momentum rolling. If you're looking for milestones next week, the Reserve Bank of Australia (RBA) rate decision and Bank of England (BOE) rate decision are the most explicit events but don't underestimate the power of lost conviction in monetary policy. 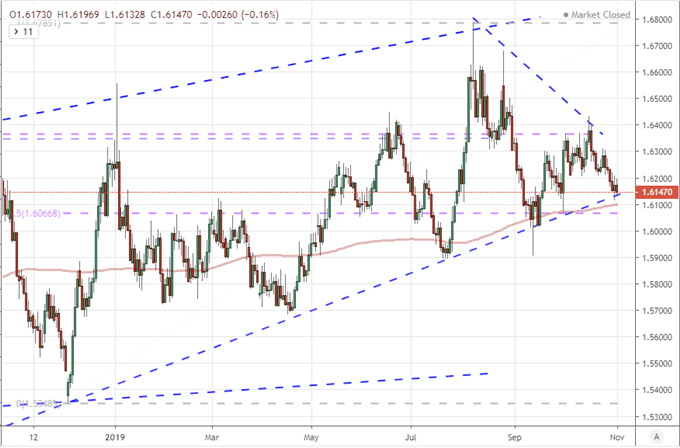 Among the major themes, the undercurrent of economic health remains an outright liability to the speculative swell we've extended. Through Friday, the United States manufacturing activity report from the ISM reported a fourth consecutive month of contraction for the sector (anything below 50.0). This is troubling, but for the world's largest economy, the service sector is far more important. The 'non-manufacturing' report from the same outfit is due Tuesday. If it is a poor showing, don't be surprised if risk trends respond poorly globally. Elsewhere, Chinese PMIs, trade figures and the EU economic forecasts are important. 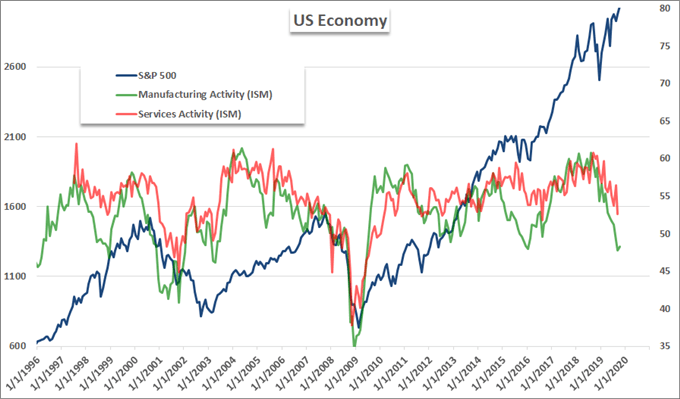 In the FX market, my top interest shifts back to the US Dollar. That is unusual because the benchmark currency has struggled for a clear read on what its top fundamental motivator is among trade wars, Fed premium loss and safe haven appeal. That role hierarchy is still not clear, which means that establishing a clear and strong drive remains difficult. If it is a struggle to forge a strong trend, the potential for the DXY Dollar Index's approaching channel floor will be skewed. A break lower into an overdue reversal following 16 months of slow climb will prove the less productive scenario - if not the lower probability. If the Greenback does make break, the technical picture from EURUSD may look appealing, but the fundamental aspects behind AUDUSD would draw my attention there first. 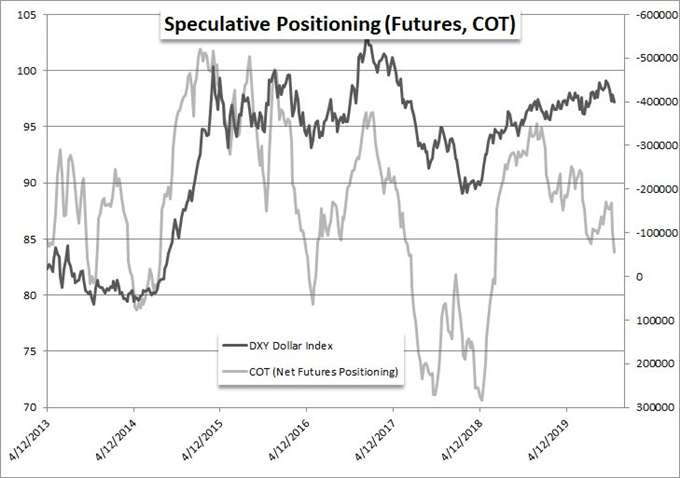 Alternatively, if the Dollar holds its channel as a path of least resistance, a reversal from either EURUSD or AUDUSD could serve well. In the latter case, an additional contribution of risk aversion would readily raise its profile in the opposite direction. At the top of my preference list though is USDMXN. The chart patterns are very well defined while the sentiment, trade and monetary policy skew in favor of the swing higher. 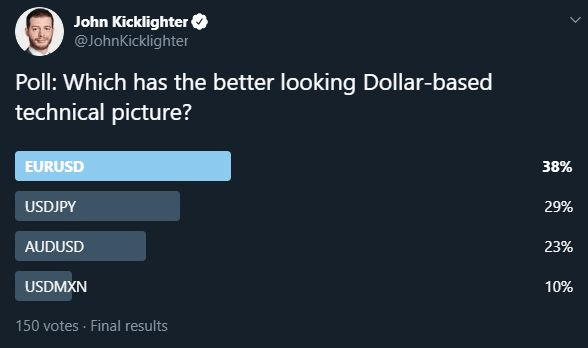