Dollar and S&P 500 Strategy with US GDP, FOMC Decision and More On Tap

Check Your Compass Before Heading into the Data Storm

We are heading into a very active 24-48 hours of market conditions. When there are just a few high-profile events for the markets to process, it is easier to focus the potential volatility such catalysts exert into a productive course. Though most investors consider themselves proficient in all market types, many retail traders will naturally pursue scenarios where breakouts afford direct and meaningful follow through. And yet, those ideal conditions are relatively infrequent. Ahead, the complications are profound, but the speculative rank will more likely assume an abundance of volatility will sort everything out neatly. Instead, the presence of US 3Q GDP along with other major economy readings, the FOMC decision headlining other central bank meetings and an assortment of earnings and high-level (though perhaps not thematic) events will leverage volatility but ensure a competition for our attention. 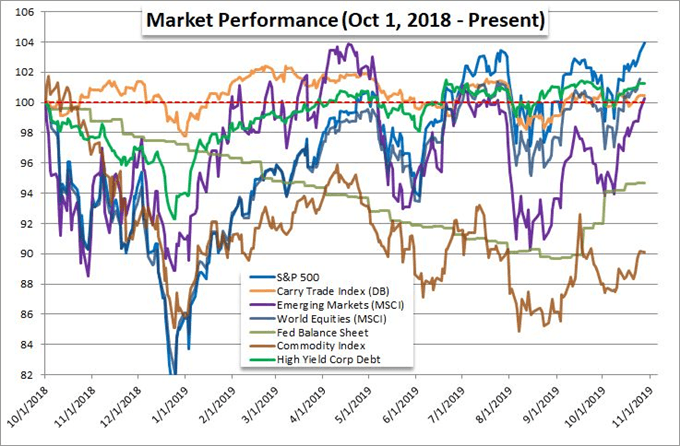 Before we prioritize the event risk and the scenarios that can more likely establish broad market traction, it is important to take stock of the sentiment lean heading into the storm. These past few weeks have afforded a substantial boost in broad risk appetite. Risk leaning assets from the US indices and global equities to emerging markets and carry trade have all moved higher. There have even been a few key technical breaks to back the expectation bullish intent. Nowhere is the pressure greater behind bullish enthusiasm than with the US indices like the S&P 500. This broad index and the Nasdaq have pushed a record high this week, which naturally is read as a 'breakout'. Yet, if we consider the technical pattern, there is still a large rising wedge resistance in place. Furthermore, there is a value question. Despite the record highs registered by the S&P 500 and its cohorts, there is a notable lack of fundamental backing to justify this run. That makes for a backdrop whereby it is easier to disappoint than to impress. 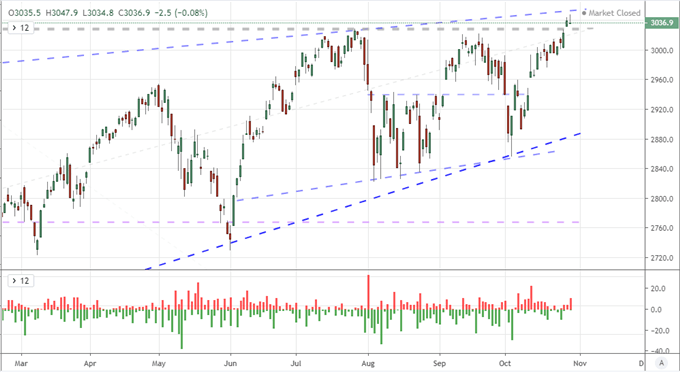 It is difficult to assess which of the major themes we will tap in the coming session that can have the greatest potential in the markets through various possible outcomes. That said, if there is greatest amplitude in a risk aversion scenario, the growth data likely represents the most potential opportunity. The US 3Q GDP is top listing for economic activity, and it can certainly print better than the 1.6 percent annualized pace forecasted. That said, even a robust reading will struggle to absolve the months of recession fears that have built up not to mention offset the global struggle that has been highlighted by groups like the IMF and WTO. A fair wind in growth for the world's largest economy could reinforce the lift earned to this point, but extending a move materially higher given it is already at records is unlikely. Alternatively, an update this level of visibility could swamp hold out optimism with a significant shortfall. Watch the Dollar and risk trends around this update. 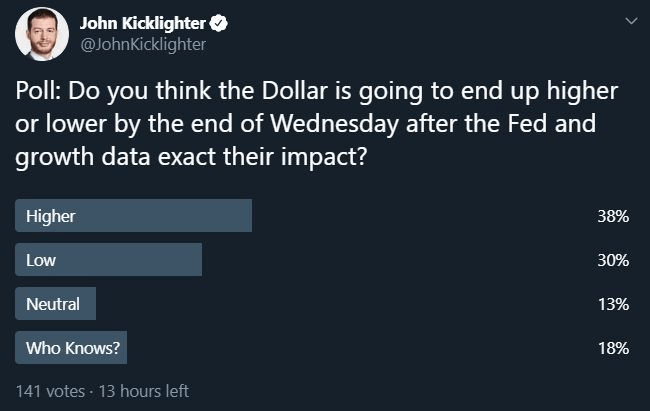 While much of the attention will be on the GDP update from the world's largest economy given its innate reach, it is important to note that this is not the only growth reading from a major economy on tap. The Euro is unlikely to respond to the French 3Q figure as a favorable reading would compete with the tangible German struggle and a weak showing will await Thursday's Eurozone print for confirmation. The Euro in particular is facing a lot of top-shelf data. One reading that avid global macro and/or FX traders should not overlook is the Mexican GDP listing. While it may not have the global reach nor even hit the tenor necessary to tap trade war fallout, USDMXN itself is positioned in a very interesting technical layout. 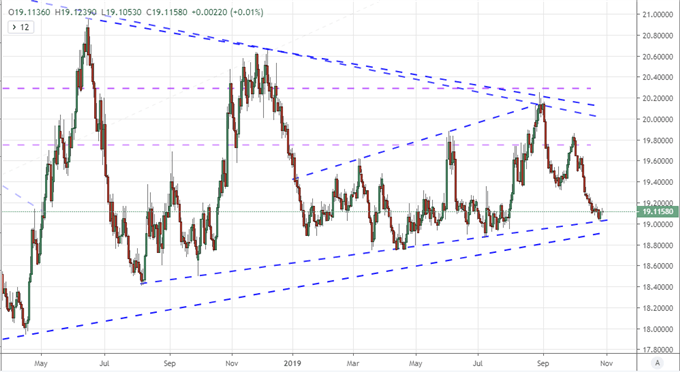 It is Difficult for the FOMC to Live Up to Expectations, But the BOC and BCB are More Neutral

There are a few reasons I would not list the Federal Reserve's rate decision on Wednesday afternoon as the most potential market-moving event ahead. In terms of how it is positioned relative to risk trends, this has been one of the lines that have supported the stretch in risk assets recently. Alongside hope that the US and China will compromise on their trade war - a dubious source of new growth in my opinion - belief that limited capacity for easing from the world's largest central bank can extend substantially already-dependent markets is fanciful. Despite President Trump's criticism before the rate decision (saying the Fed is falling behind the BOJ and ECB with their negative rates), the Fed is likely to ease only 25 basis points and do all it an to prevent 'surprise'. At record highs, US indices need more than a loose reference of value. 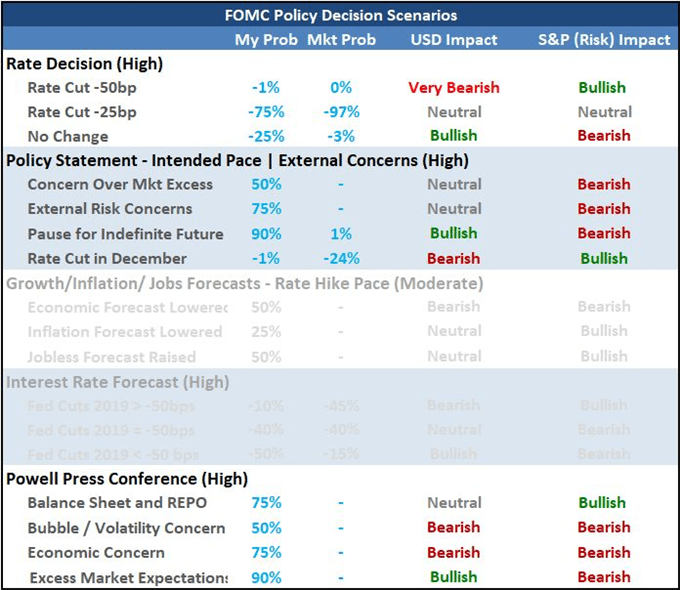 If you are looking for greater potential of impact from a monetary policy event, I would point to a few other major central bank decisions where the opportunity for a shift is higher and the impression is not global in nature. The Bank of Canada (BOC) is one of the most hawkish major central banks and it has yet to state designs for a dovish shift. The lesser watched Brazilian Central Bank is expected to cut its benchmark rate by 50 basis points with USDBRL already in a sizable swing lower from range resistance. Even the Australian 3Q CPI exudes greater surprise potential as the Australian Dollar is more dependent on its carry status. A little further ahead, we are also due the Bank of Japan and Hong Kong Monetary Authority policy decisions. Don't write those events off. 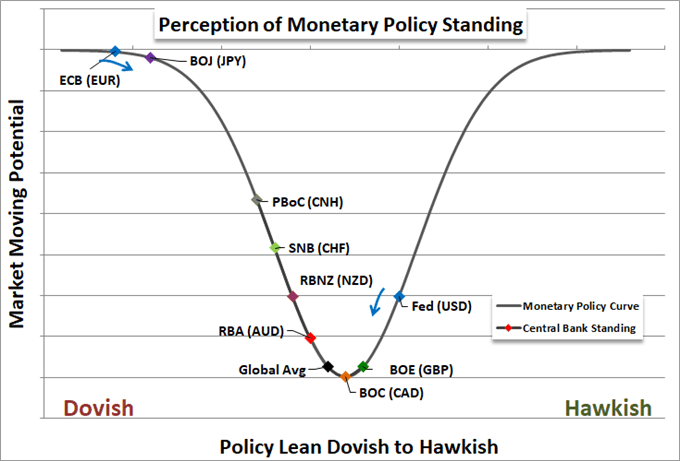 While most of our attention will be - understandably - set on events over these next 24 hours that hold a global status, that isn't the only matter to keep in mind. Trade wars for example are unresolved and always a tweet away from eruption. The US and Chinese negotiations continue to draw sources and economist assessments, but we should never forget that the White House has put pressure on Europe which could draw out dangerous retaliation that leads to outright economic warfare between the largest total economies in the world. Earnings from General Motors and Advanced Micro Devices could have tapped into this concern, but the favorable figures failed to earn the deep scrutiny.

Meanwhile, another Brexit update was delivered this past session. UK's Parliament approved the government's request to for a December 12th election. Labour backed the move with the party's leader remarking that a 'no deal' outcome was now off the table. If the market believes this sentiment, you wouldn't be able to tell from the Sterling's lack of movement. Alternatively, another delay will further drag out the uncertainty and compound the risk associated with a long period of economic and financial uncertainty. 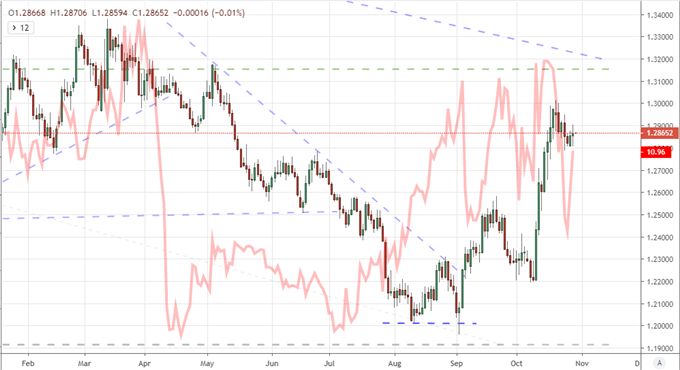