Risk Appetite: A Matter of Momentum or Conviction?

The trumpets sounded on risk trends to open the new trading week. There was a broad lift in speculative benchmarks, but the true enthusiasm was centered upon the US indices. While not all of the benchmarks earned the coveted milestone - such as the Dow - the S&P 500 did more than its fair share of rousing the bulls with its own record high. The gap higher on the open and moderate follow through into uncharted territory was a firm speculative foothold for bulls. It is only a mild concern that the blue-chip Dow would not follow suit, but the more limited mix of components can certainly go a long way for bulls to justify the disparity. I would point out, however, that chalking up the lack of follow through to a technicality could just as readily be used to justify the S&P 500's own break - merely a stir in sentiment for a measure that happened to be very close to a record. 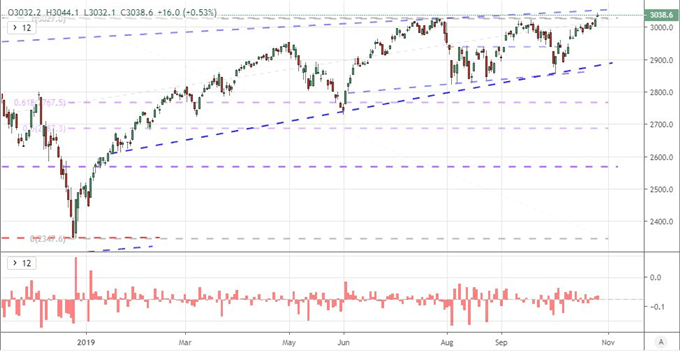 I am not playing down the evidence that there was a broad lift to risk-based markets this past session. There was significant breadth - if not similar technical 'intent - from a range of other markets that I follow to gauge participation. In the realm of equities, the VEU (rest of world excluding US) equities index extended its break above a long-term resistance the previous week a little further while the all-world ACWI has definitively cleared the range resistance that stretches back to February 2018. Other risk measures followed slowly in pursuit such as the EEM emerging market ETF and US 10-year yields, but most of these measures lack the same level of mania as is associated to the SPX. 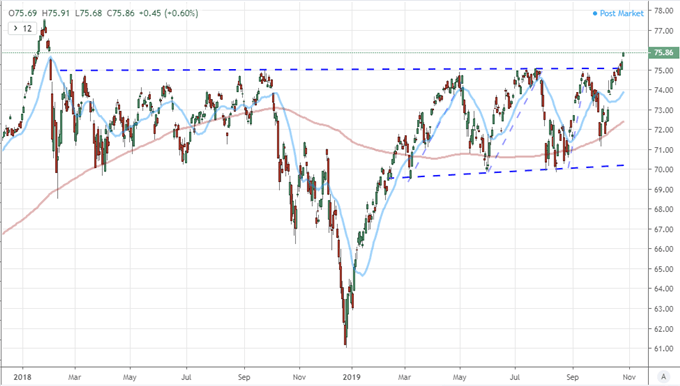 It is certainly possible for speculative markets to suspend their concerns to take advantage of certainly favorable developments in the financial system or simply a period of quiet, it has happened quit a few times over the past decade. However, investors and traders should always consider finding the best risk/reward for their exposure. That is not just a large target compared to a tight stop on a chart, it is the skew in potential and probability on the more seismic scale. When it comes to the US indices, they are pushing record highs which in turn represents a record high cost of entry or marginal increase of exposure for very little additional lift to the outlook for income or capital gains. Yet, if a mixture of complacency and selective reasoning prevails, it is good to plot out scenarios and options. Relatively speaking, carry trade has proven an underperforming risk-connected market type that can benefit sheer risk appetite. On a technical basis I like USDJPY for broad buoyancy. If we are attempting to tap the same questionable fundamental sources for advance as the S&P 500, AUDJPY would be better served via hope/anticipation for trade wars breakthrough. 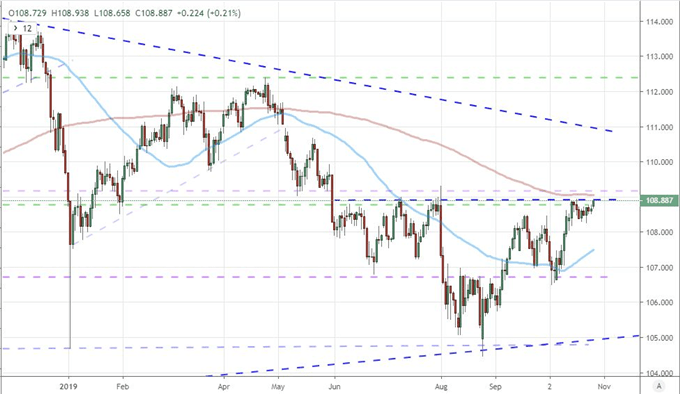 When a benchmark like the SPX hits a record high, market participants will often scramble to look for reasons for the milestone. Sometimes the reasoning is deep and obvious while other times it is shallow but hungrily accepted at face value. The financial media headlines this past session were generous with their references to tangible fundamental lift. The most believable anchor in my estimation was the anticipation for the Federal Reserve rate decision on Wednesday. The markets are fairly certain of a third consecutive rate cut at this meeting, and the existential question of why the group would ease against their own guidance for yet another gathering doesn't seem to be a matter with which market participants are too concerned. If this is a critical foothold, a 97 percent probability suggests it is more or less fully priced in. It is difficult to do more than meet expectations at this point. 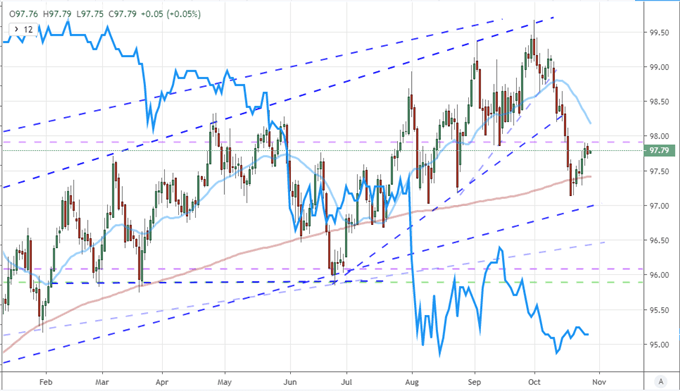 Other suggested means of lift come under far more dubious review. Progress on trade wars was another favorite in the news cycle, but there was nothing material showing the US and Chinese negotiators had agreed to anything tangible to move forward with the loose 'phase one' deal announced back on October 11th - though President Trump did say they were 'ahead of schedule'. In contrast, the US trade balance figure for September reported a -1.6% drop in exports and -2.3 percent slump in imports - a poor sign all around. Another troubling update on this front was the OECD's report that global FDI (foreign direct investment) through the first half of the year slowed 20 percent to $572 billion with the US showing a 25 percent slowdown in interest, Eurozone a 62 percent cooling while China notched a slim 5 percent increase. If this is indeed a basis for enthusiasm it will be as prone to a sentiment reversal as the balance of the relationship would imply. 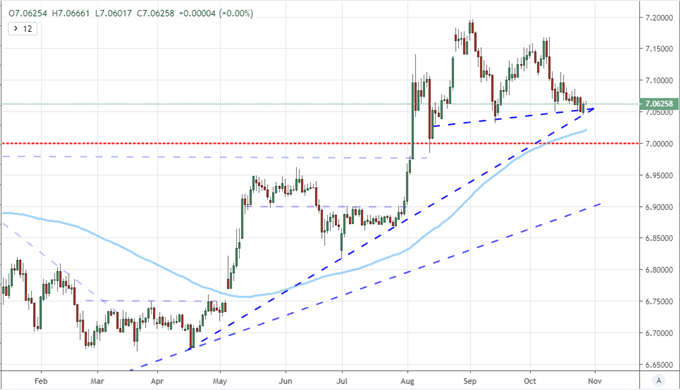 As for more data-based matters this week, any recognition of economic activity would have to revert to the data at hand. There is a clear anticipation of the third quarter GDP updates from the US and Eurozone due Wednesday and Thursday, representing the two largest overall developed economies. In the meantime, Hong Kong's secretary signaled that the 32nd largest economy in the world has tipped into a technical recession, preemptively signaling a second consecutive contraction for the financial outlet for mainland China through the third quarter before the official number hits Thursday. Less stirring but no less significant in economic terms was the weekend report that Chinese industrial profit declined -2.1 percent in the year through September while the Chicago Fed's US national activity survey slipped into contractionary territory with a -0.45 reading against a 0.05 forecast. There is very little potential for this theme to extend the stretched advance but substantial risk for it to cut it down. Beware its key updates.

A more tangible development through the open of the week was the relief from an oppressive uncertainty over the lack of clarity around the Brexit proceedings. While Monday's headlines don't track a clear path for the divorce, one of the more immediate uncertainties has lifted. The uncertainty over the countdown to the Brexit cutoff on October 31st was a pressing concern following Prime Minister Boris Johnson's forced request for an extension to January 31st (due to the Benn Act). Despite reports that France was dubious of offering too much time, the EU announced Monday that the request for full time was granted. Interestingly, Johnson requested clarification that no further extensions would be granted as a means to commit Parliament to a firm deadline - even if a 'no deal' outcome was included. The Sterling found no material traction on the news as the market keeps moving from headline to headline trying to discern the true course.

Chart of GBPUSD and the CME Pound Volatility Index (Daily) 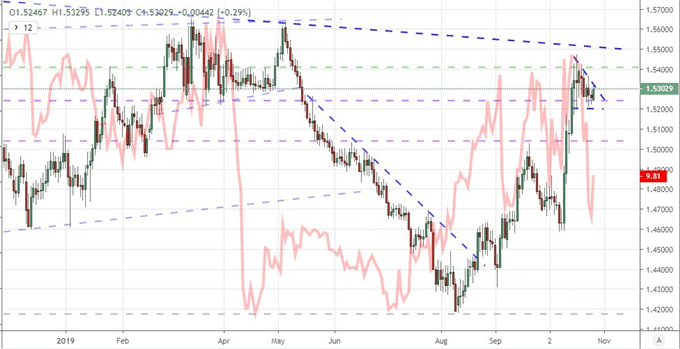