Dollar and S&P 500 Have Most to Lose with GDP, FOMC, Trade Wars Ahead

The Precarious Position of Risk Trends as a Fundamental Storm Approaches

We couldn't have ended this past week with a more pronounced speculative disparity to the prevailing fundamental backdrop. First, consider the quality of data, the forecasts from authorities and the systemic questions being asked among previously oblivious market participants. We've seen economic measures flag like the monthly PMIs which stand as timely proxy to broader GDP figures. In turn, government, industry groups and non-governmental agencies (like the IMF, OECD) have warned that recession risks are the most pronounced since the Great Financial Crisis amid systemic threats like trade wars. With so much uncertainty, questions around the foundations of our defiant capital market bearings permeate. 'Is this a reliable fair weather climb in sentiment or one dependent on increasingly-stretched monetary policy?' And, yet, despite the din of skepticism and distorted picture of stability, benchmarks were moving higher with some key measures even on the verge of returning to fresh record highs. 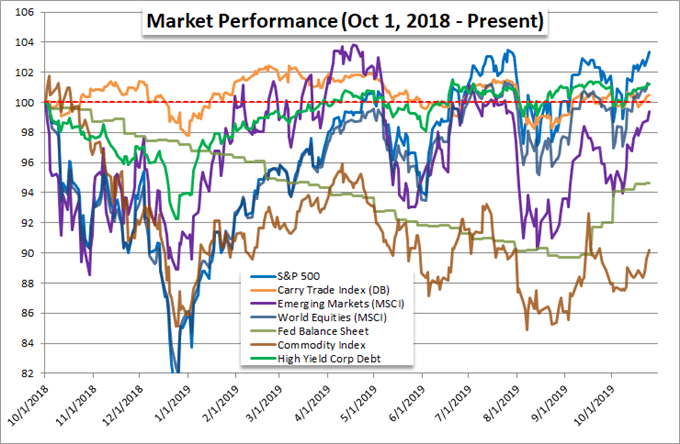 Through the past week, there were a number of benchmarks which I follow to garner a broader sense of sentiment that had signaled bullish technical progress. The ACWI all world equity index edged above a remarkably consistent 20-month long resistance, the EEM emerging market ETF broke resistance on a long wedge resistance and Yen-based carry trades moved higher. Despite the 'trigger' in the technical progress, there remained limited progress behind the implied bullish trend. As for the long-term outperforming US indices, the pressure was on but we came up just short of the high profile headline move. The S&P 500 traded within reach of the record high on July 26th but wouldn't tag an intraday high nor would it earn the award on the close. As for the blue-chip Dow Jones Index, the absolute high is still a solid-day's rally away. Nevertheless, this proximity carries an enormous amount of anticipation and speculative appetite. 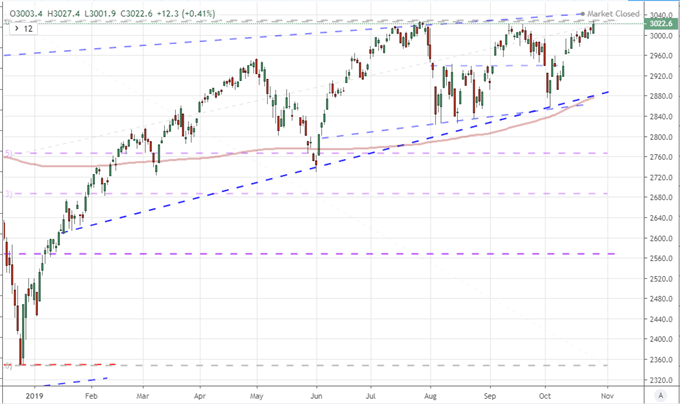 As we look out over the coming week, it is difficult to chose one particular theme that will override the others to determine the market's general bearing and level of activity. Ultimately, an unexpected outcome for a particular event, a breaking news headline or the confluence of unrelated themes could suddenly alter the fundamental mix. Yet, all we can do is prepare for probable and/or measurable scenarios. For sheer potential of impact, the top theme on my list heading into the new trading week will be the state of global growth - more specifically the rising fear of recession for the world's largest economies and the global course at-large. While there are certainly critical data points on tap, this particular matter draw perhaps the most extreme contrast to prevailing risk trends and is one of the most rudimentary measures of value available. Following the dour outlook from so many policy groups these past weeks and months, we are due third quarter GDP updates from the US, Eurozone, Hong Kong and Mexico starting around mid-week.

I will also look to US earnings for a growth connection as well. There are quite a few high-profile corporate updates on tap over the coming week. If you are monitoring leading tickers to garner a speculative view, you could do no better than the best performing US sector of the past year (from the top performing asset class in US indices) in tech. Concentrated even further, the FAANG grouping has become the acronym of special interest, and we happen to have three key players from this list due to report this week. Facebook is more of a novelty while Google gets into greater scale and some measure of the trade war pressure with the digital tax discussion. Apple will be the top billing, however, as the second largest public market cap around. If capital markets - particular US equities - start to drop, those struggling fundamental cues will suddenly start to matter a lot. 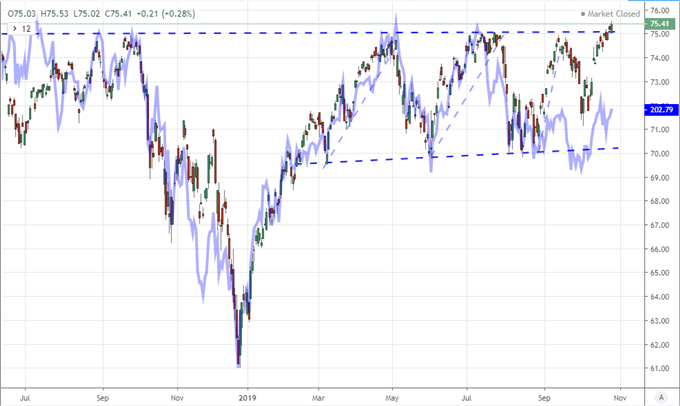 In an alternative scenario, monetary policy could readily compete for our attention and spell the top catalyst for price action ahead. There are a host of key systemically-important central bank gatherings on the docket this week, but the Federal Reserve's gathering stands far above the others. The world's largest central bank is expected (93.5 percent according to Fed Funds futures) to cut its benchmark rate range other 25 basis points to 1.75 percent. This is exceptional because the US central bank is one of the most hawkish major policy authorities and this would be the third consecutive cut. The group has said before the previous two reductions that it expected no further changes in 2019. This becomes increasingly problematic as the speculative boost garnered from small cuts is offset by the fear of why such supposedly unnecessary measures are implemented. Meanwhile, the Bank of Japan rate decision is more interesting for the outlook that will come alongside a hold and the Bank of Canada can stir the Loonie as this group is arguably one of the most hawkish groups still standing. 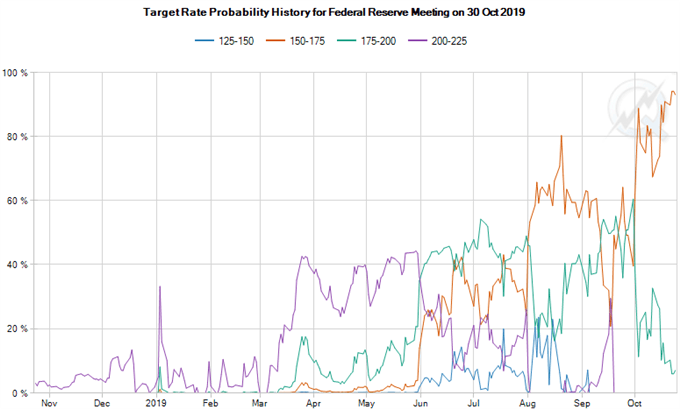 Another theme that doesn't offer up the same level of convenience in scheduled event risk but no less important when it comes to driving the markets is the development of trade wars. This theme took a backseat this past week as there was no definitive movement in negotiations for the 'phase one' deal struck between the US and China, and the European Union had yet to retaliate against the US for applying a 25 percent tariff on EU agricultural imports in addition to the 10 percent tax on Airbus purchases that more closely fit the WTO ruling. Through the end of this past week, the White House was trying to drum up some confidence in the US-China relationship attempting to counteract its troubled habits of letting the market down repeatedly despite various bouts of enthusiasm going back years. Any stark reports of breakdown between the two could compound the risk pressure across the system. And, of course, we should not forget that the EU could announce a response at any time, but perhaps they will wait for the Trump administration's ruling on auto imports due mid-November. 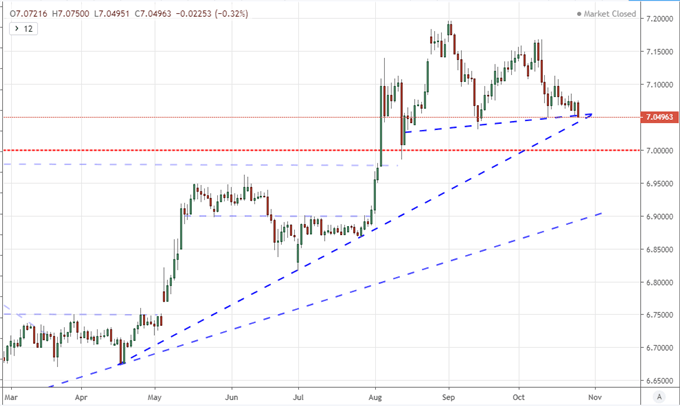 When it comes to such prolific and uncertain trends that can pull risk trends into a vortex, it is worth having sentiment options that can offer some measure of stability and disconnect from a remarkably correlated world. One haven with a particularly important financial skew that is high on my list of 'prominent indicators' remains gold. The precious metal is a rare candidate to stand in as an alternative to the collective of the world's most liquid currencies: Dollar, Euro, Pound and Yen. The commodity resolved a wedge this past week 'technically', but there is a lot left to be desired for any measurable conviction. Keep this asset on the watch list, especially if conditions start to shudder. 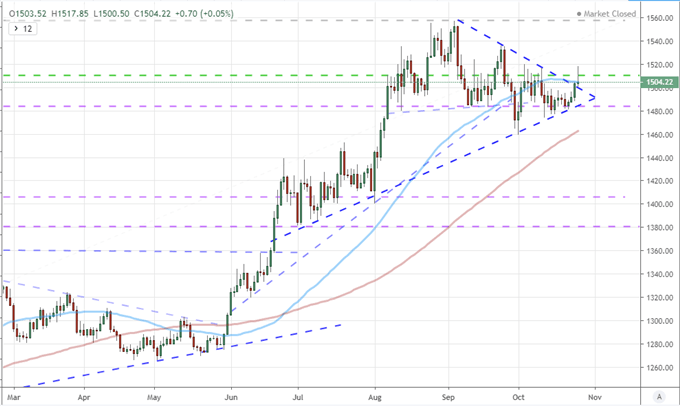 Brexit Deadlines Are Not Yet Resolved

Another theme which could raise to the level of global influence that stirs the US indices to collapse or rally - but only with a remarkable development - is the status of Brexit. On the other hand, the messy divorce between the UK and European Union is a frequent source of volatility for the Sterling. As recently as the Friday before last, it seemed like we were finally on track for a severing of the contentious relationship between the Bloc and its errant member. However, Parliament short circuited those designs when it first delayed the Prime Minister's withdrawal bill and then rejected the effort a few days later. Towards the end of the past week, the Johnson called for a snap election on December 12th, significantly extending the timetable of the resolution. The MPs will decide on whether to support this election Monday, but the more important date remains October 31st. While most expect the EU to extend the Brexit negotiations, we have yet to see the date moved. Not moving it would draw resounding pain. The amount of time offered can still determine a significant move. 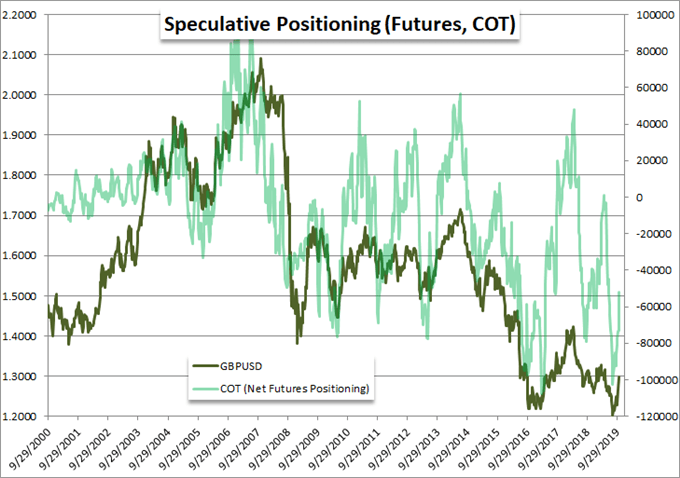