EURUSD Resorts to Technicals Over ECB Influence, Dow Too Quiet

Looking to risk assets to garner a sense of the market's present standing, it is possible to get a dramatically different interpretation of the current potential depending on which benchmark you referred. If for instance you were looking at a big-picture, global measure of equities; a trader who operated principally through technicals may believe we have triggered a bullish shift that is on the cusp of launching higher. Where would we get that impression? The ACWI all-world index leapt above its remarkably consistent range resistance stretching back to February 2018. However, there wasn't much of a follow through to this jump within the trading day. The VEU rest of world (ex-US) ETF offered up similar bearing, but it already put in the spark and showed a lack of follow through earlier this week. 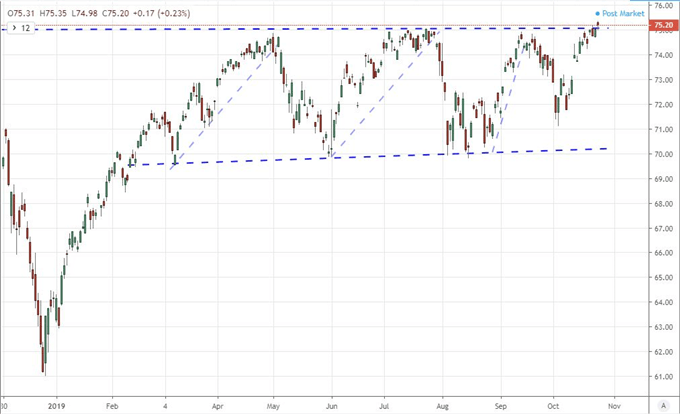 When evaluating intent (momentum) when a tempting technical development occurs, I will always look for a reliable motivation. It is possible that a chart-based move itself can snowball into its own charged momentum, but such occurrences are unusual - particularly nowadays with extraordinary swings in risk trends these past few years and an abundance of fundamental themes competing for our attention. Speculative interest, on the other hand, is perhaps one of the most effective drivers and the masses can set a bias that increases or reduces the sensitivity to normal data. Yet, from that perspective, there is little confirmation to the 'risk on' intent suggested by ACWI in other key assets like carry trade, junk bonds and emerging markets. Yet, the most remarkable disconnect in my book is the lack of commitment from US indices like the Dow. Equities as an asset class may be able to shrug off uncertainty across other measures, but progress without the seemingly indefatigable US benchmarks is highly suspect. As such, one of the most restrictive ranges for the Dow of the year clearly signals that reticence. 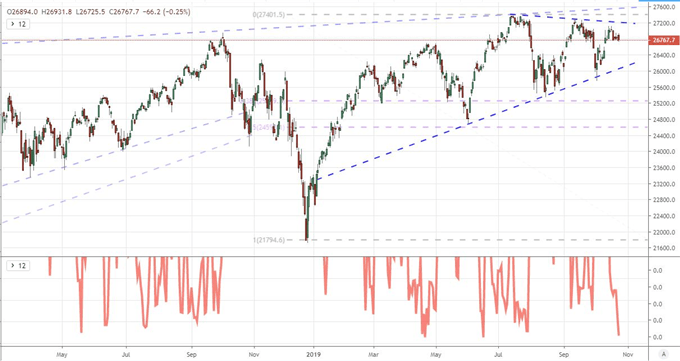 Another red flag for the intent of any bullish sentiment run is the fundamental updates this past session. If there was one obvious theme to point to, it would certainly be the state of the global economy. There were October PMIs which are a good and timely proxy for the popular quarterly readings. While the US may have offered a bright spot, it was a very small one with the Markit Composite rises from 51.0 to 51.2. In the meantime, the Eurozone broad measure also floundered at 50.2 while Germany's manufacturing was still deep in the red with a 41.9 reading (anything below 50.0 is contraction). Further Asia offered up a Japanese reading that tipped into contraction from 51.5 to 49.8 while Australia slowed from 52.0 to 50.7. And, as for the optimism for the world's largest economy, durable goods orders shrank -1.1 percent and new home sales dropped -0.7 percent. Perhaps more important, next week we are due much more profound updates on the state of the global economy including US, Eurozone and Hong Kong 3Q GDP. 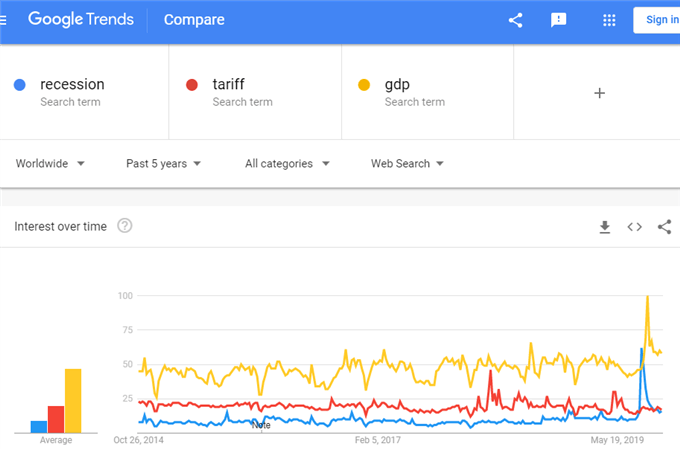 EURUSD Swings Lower but It Isn't Exactly a Momentous Move

One of the more remarkable combos of fundamental development and market movement this past session may have bene a situation of happenstance rather than causal momentum. EURUSD put in for its biggest single-day loss since September 30th when the pair notched its current cycle low. It would seem that the European Central Bank (ECB) rate decision as a top fundamental event this past session would be an obvious driver. However, the outcome of the meeting was not exactly a revelation. An unchanged course setting by the second largest central bank should surprise no one given that the group issued a broad round of easing measures at their previous meeting (a 10 bp rate cut, the restart of its QE efforts and tiered lending). To move so soon after such a comprehensive move would more likely signal a sense of panic rather than strategic decision making. That said, overnight swaps seemed to be pricing in a non-negligible probability of a rate hike (over 20 percent), but the practicality of this insinuation didn't pass the smell test. 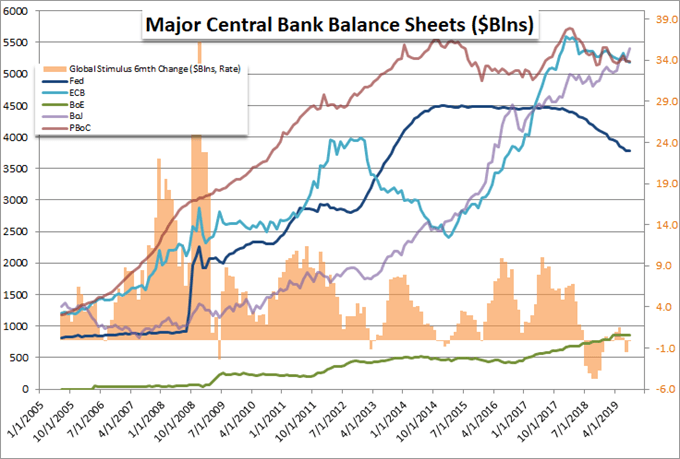 A more believable motivation for this recent swing lower from EURUSD is a natural observation of technical boundaries. It isn't that the proximity of a channel resistance and 200-day moving average (still some distance from this upswing's peak) are particularly robust - they are - but rather that it takes less speculative commitment to trip into a swing lower rather than project a breakout that would insinuate a systemic breakout. In other words, this is a 'path of least resistance' move. It is important to evaluate the drive behind this move as it can speak to the capacity of follow through. So long as there aren't competing fundamental winds to contend with, a steady slide could be a probable course. Though Friday session, we have a few highlights to put this drift to the test - namely the ECB's professional forecasters survey, German business and consumer sentiment surveys - but this would require a serious surprise to override the weekend liquidity drain and anticipation for next week's Eurozone and US GDP updates - not to mention the FOMC rate decision.

Chart of EURUSD with 200 and 50-Day Moving Averages (Daily) 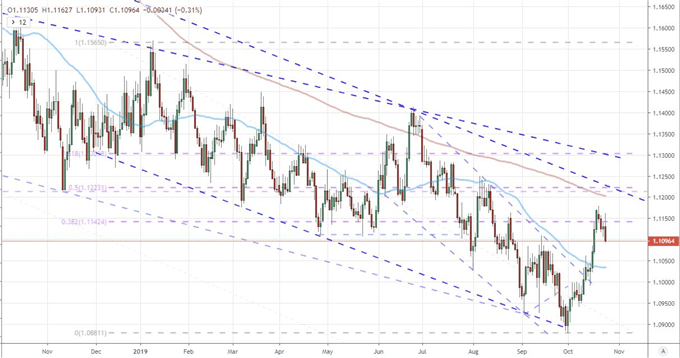 While growth as a top theme has been teased this past session and will be a high-profile draw after the weekend, that isn't the only driver that represents the risk/potential of significantly altering the bearing of the broader market. Trade wars had their time in the sun this past session. US Vice President Mike Pence was on the wires Thursday attacking the social position of global counterpart China. Despite the supposed progress between these two superpowers in trade terms leading to the so-called 'phase one' deal just two weeks ago, there is still clearly a large ideological gap that they are struggling to bridge. Pence called out China once again for its actions in Hong Kong, treatment of the religious minorities and freedom of speech issues related to the recent NBA scuffle. Chinese state media suggested the remarks were doing little to improve help out their economic relationship as Trump and Pence were playing 'good cop, bad cop'. USDCNH took the news in stride, but it is certainly a point of loosely held confidence via risk trends that could quickly implode. The same trouble lingers around the unstable situation for the US and EU where the former has levied significant tariffs outside the direct WTO allowances and the latter has yet to decide whether to retaliate.

Similar to the lurking nature of trade wars, Brexit represents a theme that global investors are closely watching for updates that can suddenly change the concept of speculative value. This past session, the already unsteady timeline associated to the UK's divorce from the European Union was cast even deeper into uncertainty when the Prime Minister Boris Johnson seemed to abandon his attempt to push a Withdrawal Agreement through Parliament and instead called a snap election for December 12th. The European Union has yet to respond to the request to extend the October 31st deadline, and this development certainly calls into question the timeline that leaders would be willing to consider. EU 27 ambassadors are due to discuss the matter further Friday, but there is significant doubt in the market that an agreement will be met. One way or the other, beware setting out clear assumptions around the Sterling for the time being. 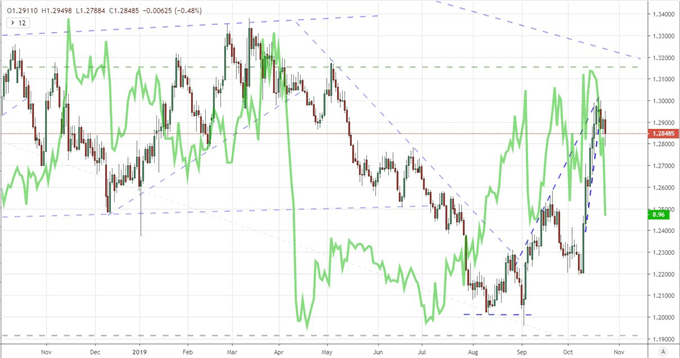