Retail FX Traders Are Positioning for a Brexit Breakdown

There was enormous speculative potential for the open of this new trading week built around the anticipation for and reaction to this past Saturday's Saturday UK Parliamentary sessions. The unusual event was called as a last-minute opportunity for the Commons to keep momentum in the drive to find a long-sought after Brexit deal between the United Kingdom and European Union just a few weeks before the most recent deadline is scheduled (October 31st). Ultimately, the group would delay Prime Minister Boris Johnson approval of his withdrawal agreement until there was legislation to support the effort and guarantees that there wouldn't be a no-deal 'accident' default should further complications arise. That would in turn trigger the 'Benn Act' which forced Johnson to request an extension of the EU for additional time for negotiations. As of Monday evening, the EU had not responded to the request. On the one hand, this outcome is still a bid to avoid a no-deal outcome. On the other, there is a lot of short-term bullish speculation built into the Sterling that relates more to a sense of proximity to an agreement rather than just avoidance of a 'hard Brexit'. Nonetheless, the market was remarkably steadfast through Monday's session. 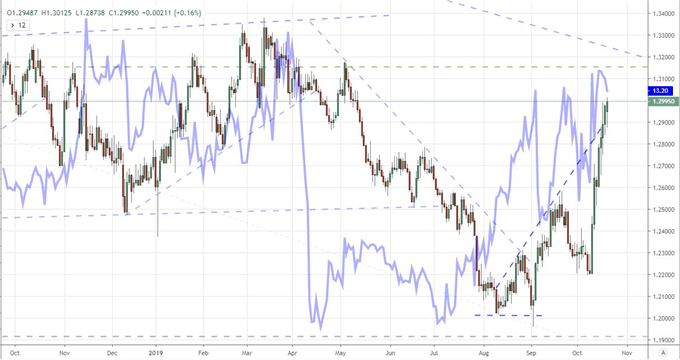 Looking ahead, we do not yet have the relief of a further deferred Brexit timeline, though it is unlikely that Europe will turn the screws for fear of the detrimental economic impact it would have on the Union. That is an important aspect to remember in this equation: the outcome of the Brexit is not just a matter for the UK. We have seen some of the most troubling assessments of fallout from this situation come from groups like the Bank of England and the Confederation of British Industry, but numerous other bodies have assessed risk for their own economies or the world at large such as the Federal Reserve and IMF. And, of course, the implications for Europe which has earned of the most tangible recession warnings are seriously troubling. While there are many paths this situation may take on any number of developments, at least the next milestone is easy to track. A vote is due on the deal at 18:00 GMT according to government officials which still has the potential of signaling support.

We should consider closely the different scenarios for this convoluted separation and the very different market impact each may represent. As with many things in the market there are outcomes that can leverage enormous movement and those that garner less traction for the Sterling, UK markets and global sentiment at large. Yet, it doesn't seem that everyone is as interested in the nuance of the fundamental considerations here. Taking a look at retail FX traders' positioning, their exposure to GBPUSD has hit an extreme net short while the underlying short exposure is the highest in at least a year. This seems to be more an effort to call a quick contrarian reversal rather than any underlying view of the Brexit picture. That is reinforced by the technical and positioning comparisons to EURGBP and GBPJPY. It is important to know the market's views as much as the textbook fundamental scenarios. 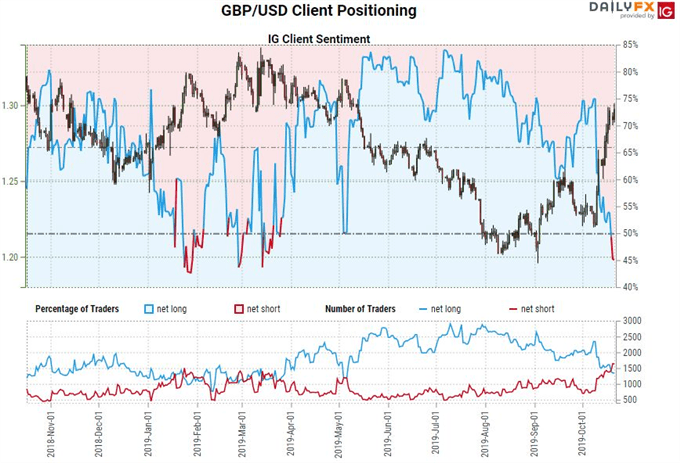 While Brexit influences may wander to the global level of influence, the more consistent weather patterns at this highest scale have seen pressure ease over from the past week. That is very much exposing a habit towards complacency. The markets default convenient aloofness in regards to the systemic risks lurking in the system is not new. Yet, the frequency if issues and the broad recognition in these matters should not leads us so willingly back to a default, no hedge baseline. Nevertheless, that is the position we often find ourselves. Looking to the various risk benchmarks I like to keep track of, we find that US indices continue to hover close to their record highs. The VEU rest of world equities index is making a feeble effort to push resistance while the EEM emerging market ETF is stilling showing volatility above its own trendline resistance. The measures further astray are not even lending their commitment. Even more disconcerting for me is the settling of volatility measures. Volatility has cooled across region and asset class, but most find their signal from the VIX. This 'fear' index is low but consider the volatility of volatility (VVIX) figure. It is dredging lows that are hard not to read as complacency. 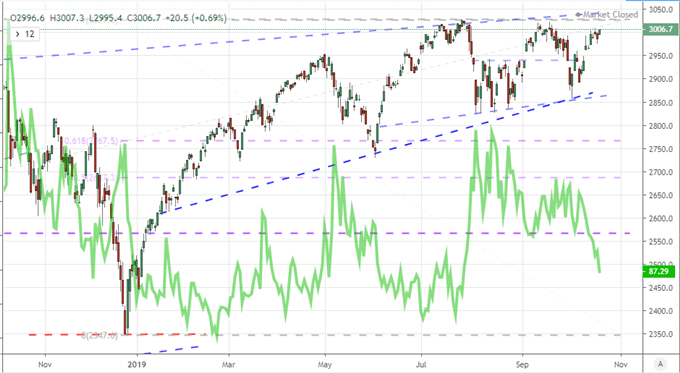 As I keep track of misaligned sentiment readings, the fundamental contrast stands out even more prominently. Economic growth concerns remain one of the most troubling discrepancies to speculative bearings. On the one hand, the Treasury yield curves that have taken such a vaunted position as recession indicator for market participant and economist alike have 'normalized' after significant bouts of inversion, but few are reading this as a signal that recessions have been skirted. In fact, we have seen in many of the instances of inversion preceding economic contraction that the spread moved back above the zero line before the economy officially stalled. To add to these concerns, the IMF's chief China watcher warned that the world's second largest economy could slow further to 5.8 percent after the troubling 3Q showing last week. Ahead, we have the Bundesbank's update for Germany and Thursday will give a global update through the most recent monthly PMIs. 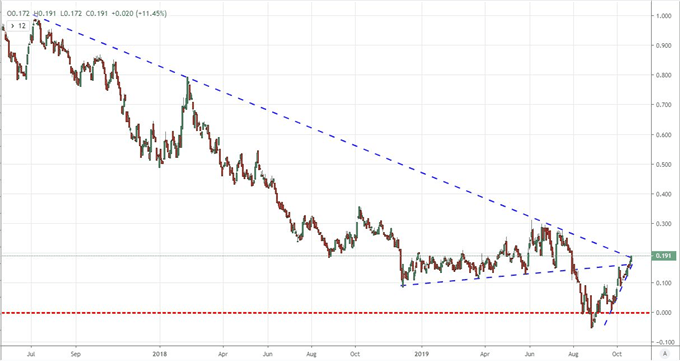 Other fundamental matters are light on key events for which we can attach expectations for catalyst. However, that doesn't mean their potential to move the market has been fully disarmed. Perhaps one of the most appropriate benchmarks for these other competing themes is EURUSD. Trade wars for example may soon find this one of the most important metrics for such an open theme in the liquid market. Up until recently, the USDCNH was a chief reflection owing to the back and forth between the two countries in their expensive trade war. Despite announcing a rough 'phase one' deal Friday, October 11th, we have not seen details released that both players have readily backed. It may be the case that the drama stretches all the way out to Presidents Trump and Xi signing something next month, but good will most likely have deflated by then. 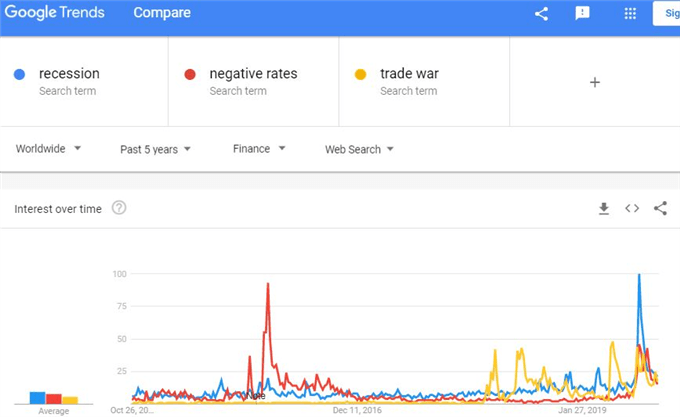 This makes EURUSD a more appropriate measure of the pressing matters of trade disputes. The United States decided to go through with tariffs on European Union imports this past week that went outside of the traditional lines expected with the WTO ruling against subsidies to Airbus and the economic relief the US could seek. At this point, the fight is one sided as the EU foots the bill, but there is serious dispute amongst the region's leaders on what approach they should take against the White House's aggressive position. The EU's Trade Minister said retaliation would have to follow a US announcement, but German officials urged colleagues not to provoke an aggressive counterpart. We will see how long the standoff lasts. 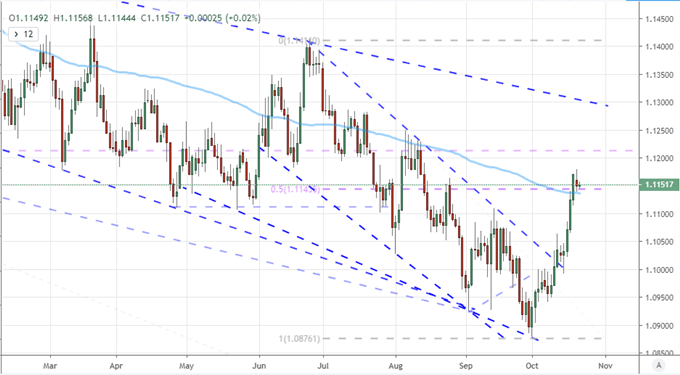 Meanwhile, there is an unmistakable interest in rate expectations when it comes to the EURUSD. For the Euro, the ECB rate decision on Thursday is an obvious objective, though the September landslide of accommodation makes follow up very unlikely. The fracture in support for dovish policy among members as a new President comes in will likely prove more significant a matter. In contrast, the Fed's rate decision is not until the 30th but there is heavy speculation buffeting the Dollar. The probability of a third consecutive rate hike has moved up to 93 percent from 91 percent Friday and 45 percent a month ago. The Dollar opened to a large gap over the weekend, which extends a troubling pattern of large jumps that we've seen more frequently these past months. Is this concern enough to keep the Greenback tumbling and tipping a genuine bear trend? I will remain skeptical but not hard fast against such an occurrence and certainly not without a plan for such a scenario. 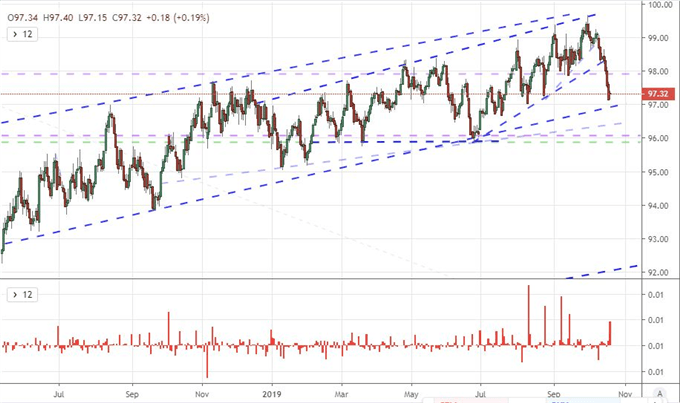