EURUSD, Pound, Volatility - The Biggest Risks and Opportunities Ahead

Complacency or Compression in Risk Trends Amid Regular Warnings

We closed out this past week without having to make any difficult decisions on whether we (collectively as a market) are going to ultimately commit to systemic risk appetite or aversion. Yet, that resolution will likely be forced upon us sooner rather than later. We are dealing with fundamentally active times, there is remarkably correlation across various assets and speculative exposure is extreme. That either requires regular pruning to keep markets aloft or it stands to collapse under its own weight. I am much more concerned / fixed on the latter scenario. These are not conditions in which a significant 'melt up' is a practical opportunity either through value or speculative discount. Meanwhile, the consistent climb has been labeled "the most hated bull market in history". 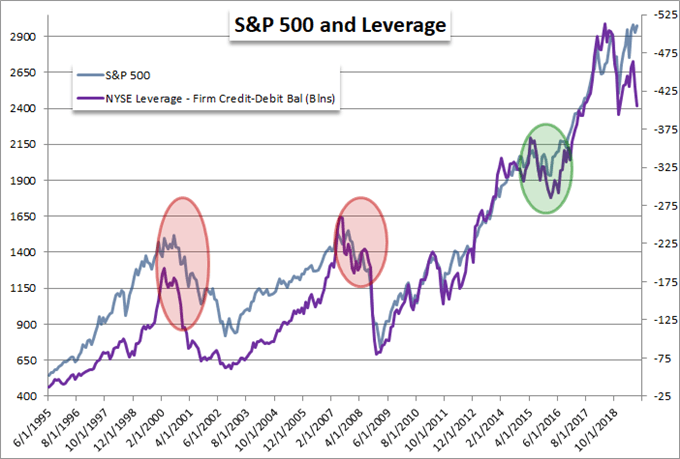 Taking a step back from the systemic, there are more measured moves to chart out over the coming week. The benchmark S&P 500 is close to the top boundary of its 2019 congestion - a wedge with a modest bullish gradient to it. To break resistance would be to tempt a move to break to record highs and all the conviction that would insinuate - ripe for a false move ending ultimately in reversal. While the likes of the VEU (rest of world equities), EEM (emerging market ETF) and carry trade (Yen crosses) are not as inflated in their position, they will likely require a stronger push to trigger a lasting advance. Instead, the path of least resistance is a range swing that can play out just as much through the appreciation of existing risks as the emergence of new threats. 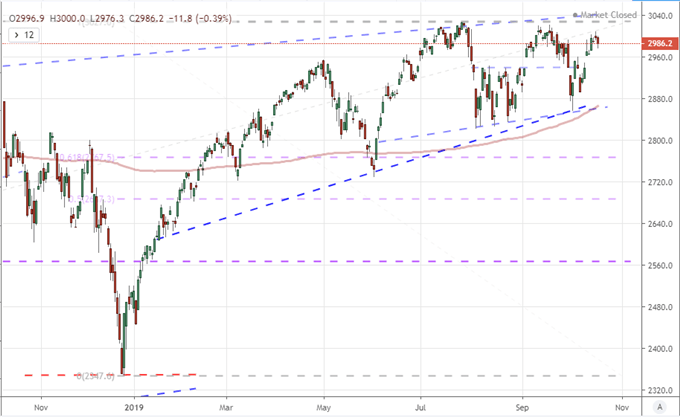 When looking for fundamental leverage to apply to the market, one of the very few sources of possible intense lift for risk trends would be trade wars. It would be an outlier scenario, but a sudden and definitive breakthrough in the US-China trade war could genuinely supply bulls a significant foothold. There is certainly opportunity for these two countries to provide us with a favorable jolt. On October 12th, the 'phase one' deal was announced with terms that looked like significant progress to de-escalate a painful and expensive trade war. That said, we have yet to see any confirmation in writing while rumors of troubles build. If we have to wait until the Chilean summit of APEC to get a sign off and details, risk trends will probably have already faltered. On the off chance that we do get something more tangible from the two adversaries, consider AUDUSD which is more liquid than USDCNH and has considerable technical potential.

Chart of AUDUSD with CNHUSD (Daily) 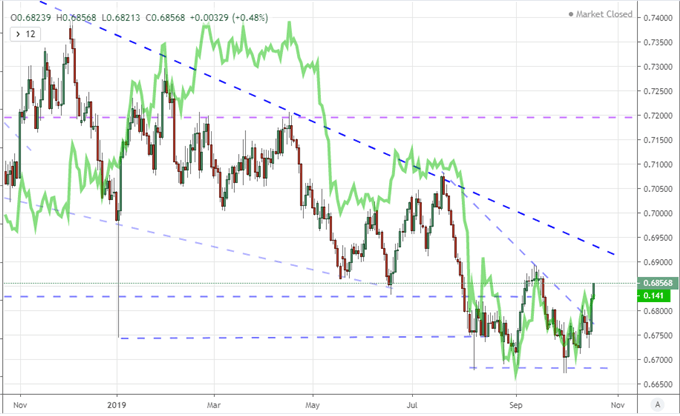 The other front on the trade war to keep careful watch over is the state of the United States' economic relationship with the European Union. Apparently, there would be no convincing the White House to back off the tariffs that had received WTO approval. The $7.5 billion in taxes would be collected through a 10 percent levy on airplanes and a 25 percent tariff on agricultural and industrial goods. It is those latter two groups that are truly inflammatory and will draw a significant response from the EU. The real question is whether they wait until the WTO counter ruling in early 2020 or move before then. Either way, we would be heading into a trade war, but the latter scenario would send us down that path faster and with more abandon.

Both Recession Fears and Monetary Policy Will Exert Pressure on Markets

If you are looking for less passive fundamental themes, growth will be a more targeted event risk. This past week, the IMF's warning through the WEO could not be any clearer. The worst forecast for global expansion since the Great Recession is a troubling outlook. China's 3Q GDP reading coming in at a fresh multi-decade low 6.0 percent reinforces the global perspective as well as the reality of consequences on external systemic risks like trade wars. In the quarterly government category, we have the Korean 3Q GDP update due, but the monthly (September) PMIs will give a more global picture. This will be a constant erosion on uneven market sentiment.

Another theme that can prove particularly market moving is monetary policy. The systemic concern with this fundamental theme is the artificial leverage that it has created over the past decade to extend risk exposure to extreme levels. The IMF's financial stability report drew even more attention to this distortion, but the market has yet to reflect the gravity of this situation. In the meantime, FX traders should be mindful of more targeted event risk. There are a number of rate decisions this week, but the European Central Bank (ECB) decision is the most prominent. After the extreme dovish shift last month, it is unlikely they will do more. Instead, we should watch for further evidence that the group is splitting between its dove core and its increasingly troubled hawkish skeptics. In the meantime, we may not have the FOMC decision on tap this week, but anticipation for a third consecutive cut has risen to 89 percent as of Friday. 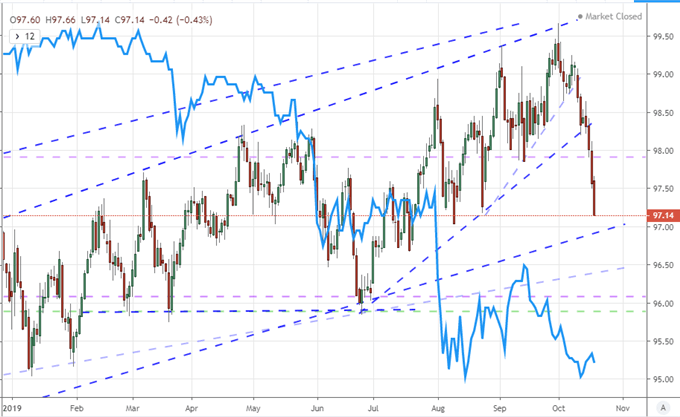 For sheer volatility, no other currency faces the risk that the British Pound does. The critical event risk actually occurs over the weekend with Parliament due to weigh in on the agreement struck by Prime Minister Boris Johnson and the EU negotiators. This is not the first time that we have had a withdrawal agreement between the two parties. Theresa May brought back a deal that was rejected resoundingly...three times. Is Johnson's agreement more palatable to the skeptical MPs? Has he played the political game more effectively? The suspected tally heading into the weekend showed the outcome was hotly disputed. That only adds to the expected volatility priced into the currency. In fact, the overnight implied volatility behind GBPUSD is exceptionally high while the one-week forward looking reading is the highest since the actual Brexit vote. 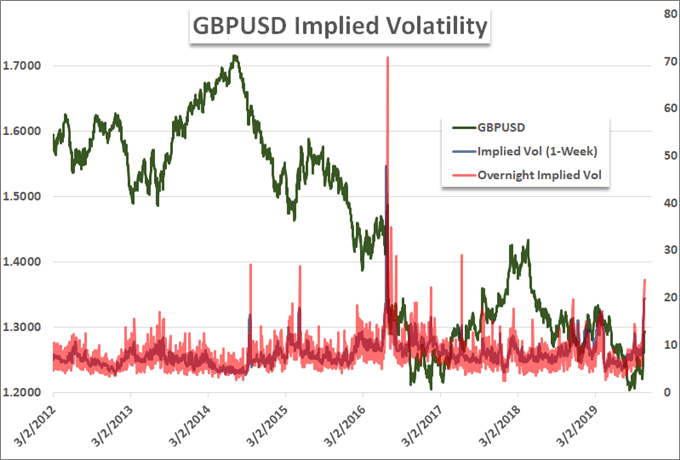 While there are many additional steps to this divorce, the next step is considered to be fairly black and white. Either Parliament accepts or rejects Johnson's deal. If they agree, we have a functional withdrawal that can finally offer clarity as to the country's economic future and the Sterling is still sporting significant discount that will quickly start to lift. Alternatively, a rejection doesn't put us in the immediate spiral of a no-deal outcome. That said, we still have Juncker's remarks that an extension wouldn't be entertained and the question of whether the UK could ever find a common ground with the EU. My direct concern though is that the past week has seen an extraordinary climb for GBPUSD and other key Pound crosses that is likely to rapidly deflate.

Chart of GBPUSD and 10-Day Rate of Change 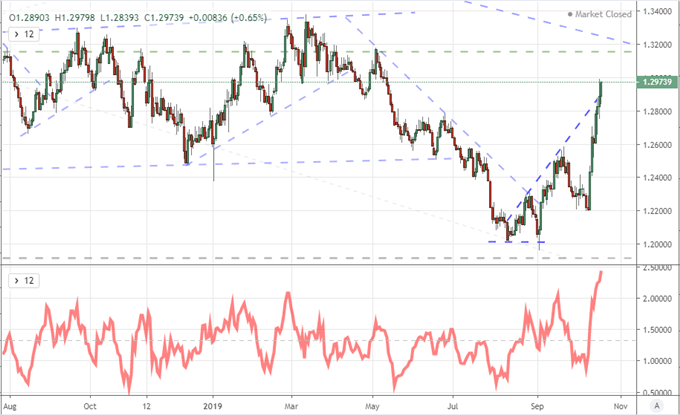