The US and China Announced Partial Deal...And There Is Plenty of Reason to Be Cautious

True to form, the White House saved critical fundamental news for the very end of the trading week. While President Trump and Chinese Vice Premier He announced measures to de-escalate the trade war between their two countries before the New York trading officially ended Friday, the lack of liquidity may have played a significant role in the restrained response. With the European and Asian markets offline, there was very little time to clear significant trades to increase exposure to any risk assets that investors may have been interested in taking on. What's more, recent precedence would actively discourage traders from crowding into such a position just before the weekend. We have seen more than a few instances over the past months where an unexpected financial turn triggered a sharp gap lower in risk assets on a Monday open. Would you want to take that risk even with enthusiastic leaders trumpeting their progress? 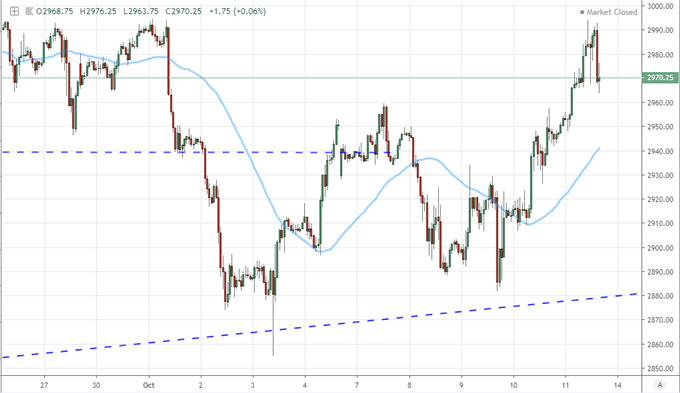 Deciding whether or not the agreement struck between the US and China Friday is the kind of improvement that can usher in a full revival of confidence and speculative lift is a matter for the collective evaluation of a full market. Yet, let's consider the terms and the scenarios to prepare for next week. President Trump and his team referred to the agreement as a "phase one deal". Included in this understanding, China would purchase $40-50 billion in US farm products annually, critically the planned increase in tariffs on $250 billion in Chinese imports from 25 to 30% would be delayed (though seemingly not cancelled), the US would review the entities on its blacklist (not Huawei), the Treasury would reconsider the label of currency manipulator and there was a very loose commitment to figure out enforcement. The intellectual property demands are still far from clear - much less met - and the scheduled increase in the list of Chinese imports on the tariff list on December 15 is still in place. Whether this is enough for short-term speculative relief/enthusiasm is up to the markets. I took a poll shortly after the news and the initial take is understandably mixed. 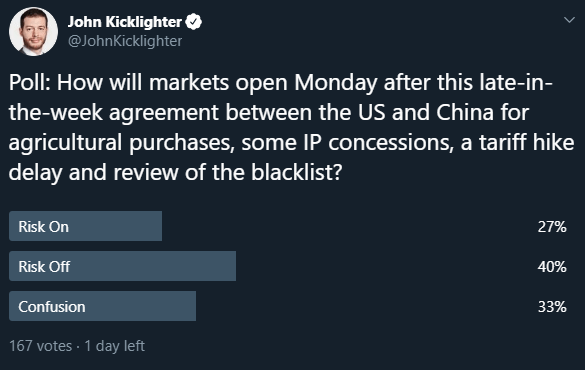 What happens through the first 24 hours of trade next week will be very informative as to how the trade war news is being interpreted and the state of risk trends itself. However, there is a broader question that the markets will inevitable weigh on whether they appreciate it or not: would the global economy stand to grow if trade wars were fully wound down? The trade wars thus far (not even including the emergent risks with the likes of the US-EU scuffle) have taken a serious toll with a lasting drag on health. Fear of further throttled expansion through trade barriers certainly represents a serious weight on sentiment, but its removal does not translate into a new source of actual growth. If the global economy is on an unstoppable slide, the attention will simply shift from the headline-worthy catalyst to the reality of our underlying predicament.

Recession Fears Will Give Trade Wars a Run for Our Money

Looking ahead to next week, there is clearly set to a heavy focus on trade. That said, unless there are fresh updates on suggested follow up negotiations in China, the market will incorporate its enthusiasm over Friday's news fairly quickly. Any risk appetite follow through via this matter therefore would need to be built on speculative momentum itself. Of course, there are a few alternative events worth noting like the Chinese trade balance and the supposed start date of the United State's fresh tariffs on EU airplanes, agricultural and industrial goods (Friday), but these won't pack the same punch. That is in part due to the expectation of competing and more pressing matters. In particular, the state of global growth will be a headline concern. And, if fear continues to build around the assessment of economic health, expect the interpretation of trade wars to suffer in turn. 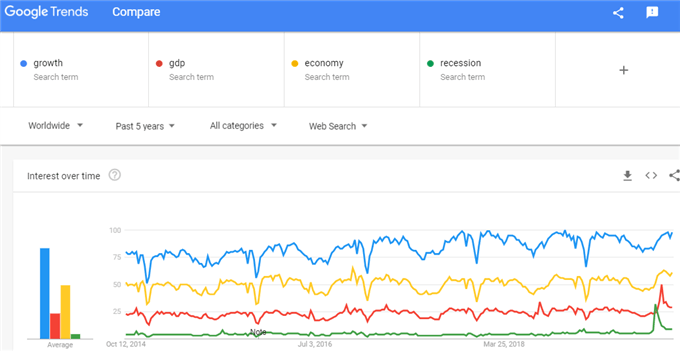 In evaluating the status of our global economy, there are two events in particular that should be watches closely: the IMF's semi-annual updates and China's official 3Q GDP release. The Chinese government's update is the most target insight, but many market participants hold considerable skepticism over the data's veracity. More practically limiting is the fact it comes out on Friday which means there is more anticipation than response to the figure through the week. If you like volatility though, thankfully the IMF's World Economic Outlook (WEO) is due out on Tuesday and their Global Financial Stability Report (GFSR) us scheduled for Wednesday. Given the new managing director's warning this past week, the outcome is likely to be particular poor. It is growing very difficult to ignore the troubled backdrop, and eventually complacency will be overridden by the evidence. Interestingly, the US 10-year to 3-month yield spread corrected for the first time since July Friday, but that does not relieve the recession signal according to historical reference. 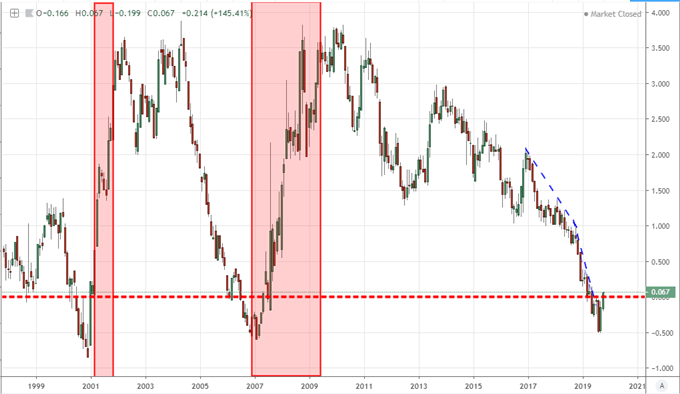 What is Driving the Pound, Dollar and Loonie?

While it is crucial to evaluate the most pressing fundamental theme at the start of the new trading week, there is significant fundamental and technical opportunity that can arise elsewhere and potentially independent of the systemic themes. The Sterling is one such currency I will be watching for its own fundamental motivation. GBPUSD put in for its biggest two-day rally in over a decade through Friday and it was easy to appreciate what could possibly lead to such a prominent counter-trend move. There is serious anticipation that the UK and EU are on the verge of finding a compromise on the extended Brexit negotiations. With October 31st still set as a critical deadline, the market interpreted progress in the optimism between Prime Minister Johnson and his Irish counterpart as well as the positive remarks following the Barnier and Barclay meeting. Keep close tabs on the headlines as this is a very fluid situation. It also clearly has generated enormous speculative attention and can thereby spur lots of volatility whether we come to a favorable or unfavorable outcome.

Chart of GBPUSD and 2-Day Rate of Change (Daily) 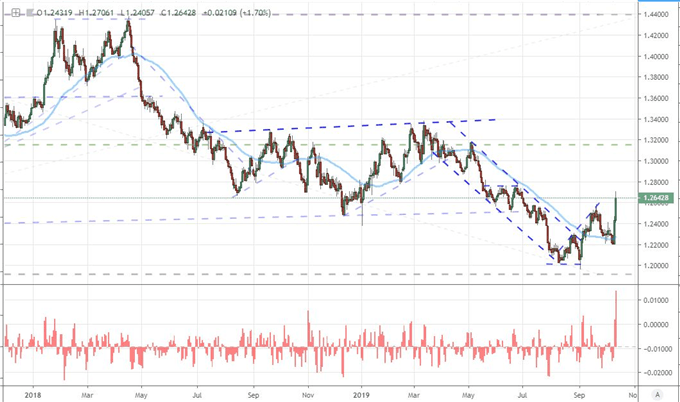 The Dollar is another currency to watch closely. We have plenty of event risk on tap over the coming week and substantial exposure to themes (like trade wars and recession fears), but the week-ending news that the Fed was defining the terms of its balance sheet growth moving forward can prove a monetary policy-based currency driver. The central bank said it would be buying $60 billion in shorter-duration Treasury bills per month staring October 15 to run through at least the second quarter while overnight and term repo infusions would keep through January. This may not be the QE we have come to appreciate this past decade but it still inflates the balance sheet and leads to misplaced optimism among already over-extended speculators.

Another currency to watch is the Canadian Dollar. The currency enjoyed a significant rally through Friday - and it wasn't the result of an ancillary trade role. Instead, the September jobs figures significantly beat expectations with a 53,700 net job increase based on full-time positions while the jobless rate dropped 0.2 percentage points to 5.5 percent and wages grew 4.3 percent. That is very encouraging and good for a short-term bullish spike. If there is to be follow through, however, we will need to see it feed into expectations for the Canadian economy to outperform other struggling economies and the Bank of Canada to remain relatively hawkish. The mid-week CPI figures may help with that as well. 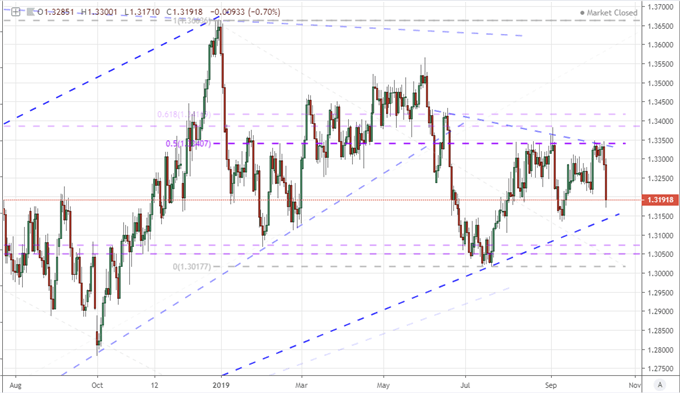