We will close out the month of September on Monday and enter what is the most volatile month of calendar year historically. Relative to seasonal conditions, we certainly see the potential of a more dramatic backdrop, but circumstances are such that the markets are unwilling to act on their fears - much like a deer in the headlights. Markets cannot remain indecisive - whether we qualify that on a fundamental or technical basis - forever though. A break in the speculative impasse will come soon, and the resolution will be found when the market determines which of the competing fundamental themes driving collective speculative decision making is of greatest importance. 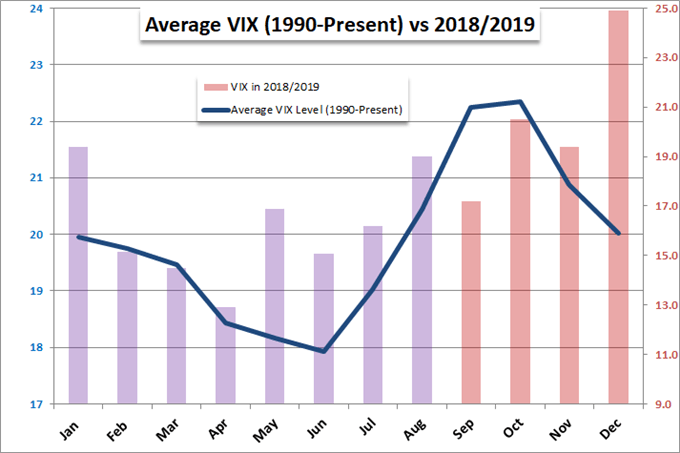 For the moment, the headlines surrounding the US impeachment inquiry into President Donald Trump command a remarkable level of attention. In a world where views on conservativism and liberalism, populism and globalism are so bifurcated; it is inevitable that such an event will temporarily blot out other important considerations to the fundamental spectrum. This is very similar to the situation we have dealt with in the Pound's stormy disposition dictated by changes in the proceedings of the Brexit situation. That isn't to say the Sterling has held steady, but rather that advance, retreat and volatility have surrounding developments in this contentious divorce and as much through speculation of its course as genuine milestones. Impeachment investigations can take an extended period of time and it doesn't necessarily pose an immediate threat to growth or financial stability. On the other hand, it can crowd out real updates on alternative headlines that could have otherwise altered the view of the speculative masses. 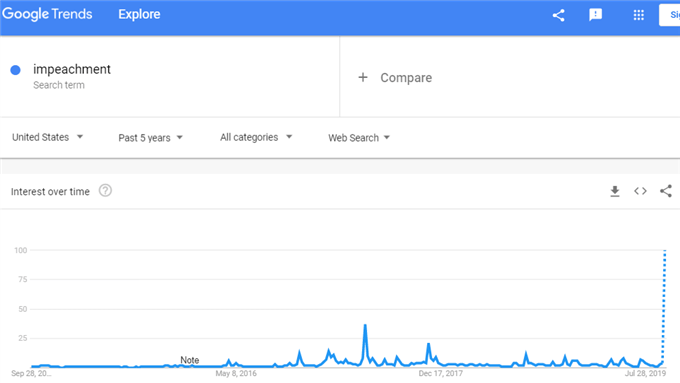 For the world's most liquid currency and heavily referenced speculative asset - Dollar and S&P 500 respectively - this situation makes potential murky at a very inopportune time. The DXY Dollar Index edged to a multi-year high this past week, but it showed little intent to make a systemic break or full reversal out of the staging. More recognizable in its sidelined position through a matching technical picture, the S&P 500 is trading in the middle of a measured range with a break leading to record highs or systemic reversal. There is incredible potential (or risk, depending on your market views) loaded into these dominant assets. Yet, set your expectations for break and follow through accordingly when devising your trading approach. 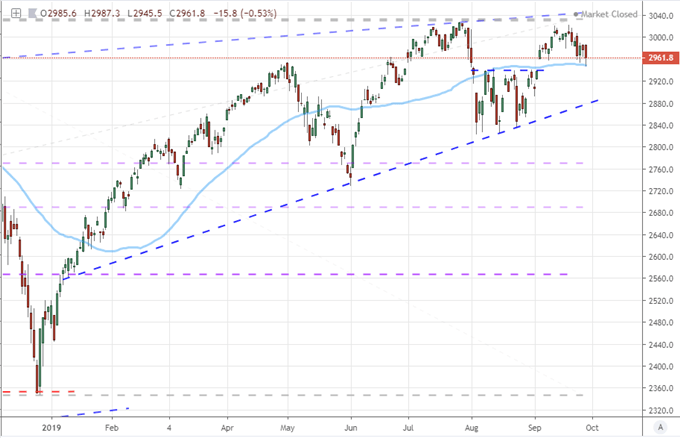 Though we need to account for political pressures to be resolved or generally lose their sway over market attention, that doesn't mean we can afford to lose sight of those more productive themes that can still generate volatility or eventually take control of the bearings we forge. Trade wars is still an active theme as we saw through the end of this past week. Despite the US and Chinese delegates reportedly still negotiating trade conditions, there was a shudder running through the financial markets Friday when it was reported that the White House was considering limiting investment flows into China. The Chinese Minister of Foreign Affairs warned that the country would not be bullied and that following this line could find the world in recession. In the week ahead, expect more rumors and headlines around the US-China discussions, but that isn't the only source of talks. The WTO is reportedly due to rule on the United States' ability to raise tariffs on Europe in response to an Airbus anti-competition ruling Monday which can turn the economic war in a different direction.

Growth concerns are another, steadfast interest for investors, consumers, business leaders and central bankers alike. Through the end of this past week, we were delivered a global update of economic health. From China, industrial profits - the life blood of the economy - contracted -2.0 percent year-over-year through August. In Europe, the Eurozone economic sentiment survey slowed to a 101.7 reading from 103.1. In the world's largest economy, durable goods orders were tepid at 0.2 percent but it was the slowdown in personal spending to the tune of a mere 0.1 percent growth this past month that really registered. There has been considerable talk recently of the US data beating expectations more regularly, but the pace is still troubling. Looking ahead to the coming week, there will be various data points that will borrow growth implications from the US ISM service sector report to Chinese government PMIs to Canada's monthly GDP report. It is more effective if it is collectively strong or poor. 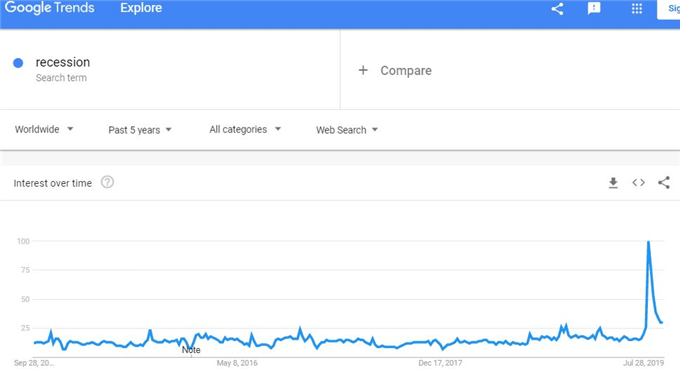 As far as fundamental momentum is concerned, monetary policy is another high-level consideration. While there is significant potential for rates, stimulus and forecasts to define bullish or bearish expectations, this theme carries more weight as an amplifier than a catalyst. Recognition that monetary policy is a critical pillar of the past four to five years of climb in capital markets and a potentially destabilizing distortion, if the mirage of speculative appetite is broken, there is considerable gap to cover before we can approach what we consider to be a traditional measure of fair value. 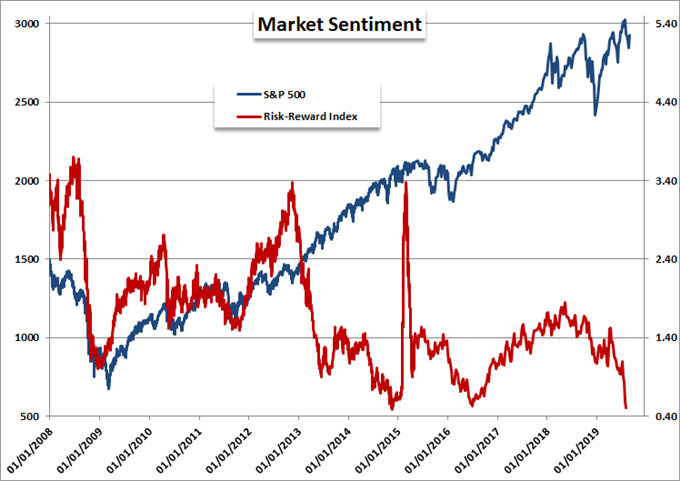 While the true potential to move the markets moving forward is to see confidence in its omnipotence falter, there is still measured opportunities to be found in particular outlets. There are numerous central bank speeches scheduled out over the coming week, but I will focus on very high-level event risk with a direct channel to policy actions. The most targeted update will be the Reserve Bank of Australia (RBA) rate decision. Given the forecasts for rate cuts from this group, there is greater potential to 'impress'. The September US labor data (anchored by NFPs) is due on Friday, but this is not the mandate that is most pressing for Fed policy decision going forward. A monetary policy-directed currency off the beaten path but nevertheless watching closely for outside influence and the exceptional technical backdrop is the Swiss Franc. The EURCHF dropped 7 straight sessions - the longest dive since August 2014 - through Friday coming into the midpoint of its post January 2015 collapse. 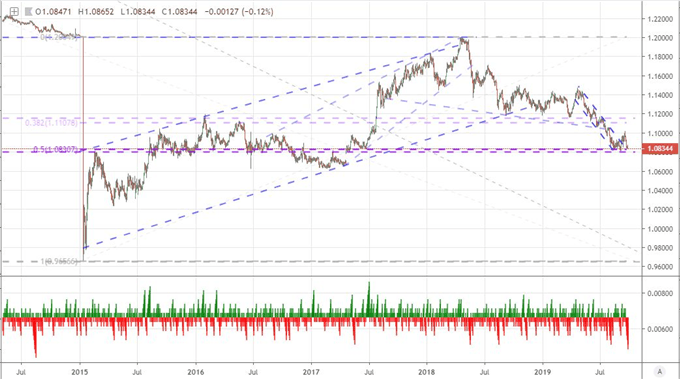