Starting from Market Performance and Work Back

Technical traders believe that all the relevant information to be found in the market is to be found in price. So long as you don't believe the EMH (efficient market hypothesis), that would also include all the relevant speculation about future developments on key themes. I am not a believer in this otherwise convenient interpretation as the knowledge 'of' event and/or thematic risk does not suggest that the masses know inherent how the matters will play out. That said, there is something to be said in the market's bearing to indicate what matters. With so many competing fundamental catalysts it can be difficult to determine what theme carries the most heft when it comes to swaying collective sentiment. What better way to settle that otherwise nuanced and debatable conflict than to see what developments trigger the greatest sharpest and broadest market response? 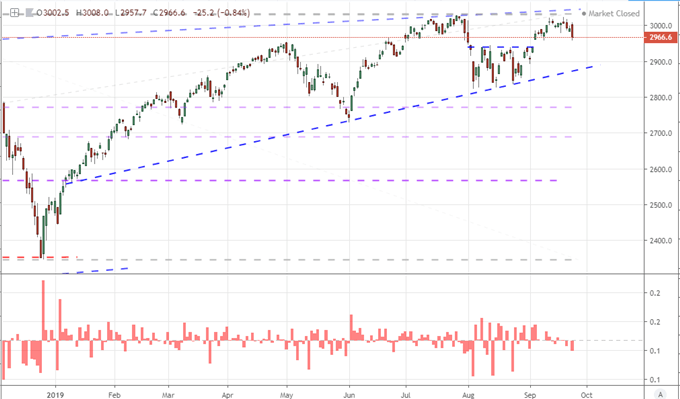 With this market-as-first-measure in mind, we see in the global markets this past session an unmistakable swoon. The technical patterns are remarkably similar across a host of sentiment-related benchmarks. The S&P 500 and US indices encapsulate it well. Hesitation at relative highs - near record for this segment and mere multi-month peaks for most others - finally sees a meaningful measure of retreat through Tuesday's session. The trendline resistance that has been upheld is made even more concrete as a defining feature of the landscape as it adds yet another successful test to ensure a wider swath of the market is aware of its presence. What is more remarkable in my book those is the consistency of the retreat and consistency of the same technical pattern across regions and assets. If US and global shares, emerging markets, junk bonds, carry trade and yields are all making a uniform 'risk off' move, it is a sign not of a temporary data-based response but rather a systemic reflection on sentiment - the foundation of the financial markets. Such moves are where trends can take root. 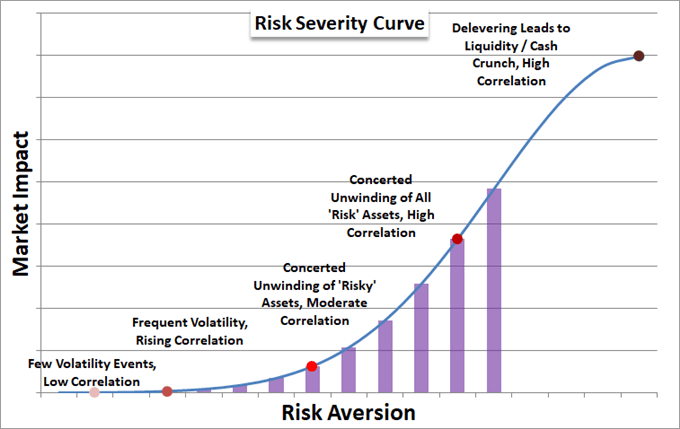 As far as the top fundamental developments through this past session, all the familiar themes were finding traction through various updates. Recession fears were stirred by a few data points. The delayed Japanese September PMIs printed shortfalls on expectations with a particular retrenchment in manufacturing. German business sentiment took a dive according to the IFO's figures which compounds the concern that Europe's largest economy is already heading into recession. And the United States consumer is reportedly starting to worry about the economy and its external pressures. The Conference Board's September report showed that the world's largest collective economic force saw its expectations reading tumble from 107 to 95.8 - the biggest drop in nearly a year. Looking at the new favorite market signal for economic bellwether, the US 10-year to 2-year yield Treasury spread is less than a basis point away from inversion. This particular spread will carry the market's fears more readily than any other segments between its ubiquity and the fact that it corrected for a brief period.

Chart of US 10-Year to 2-Year Yield Spread (Daily) 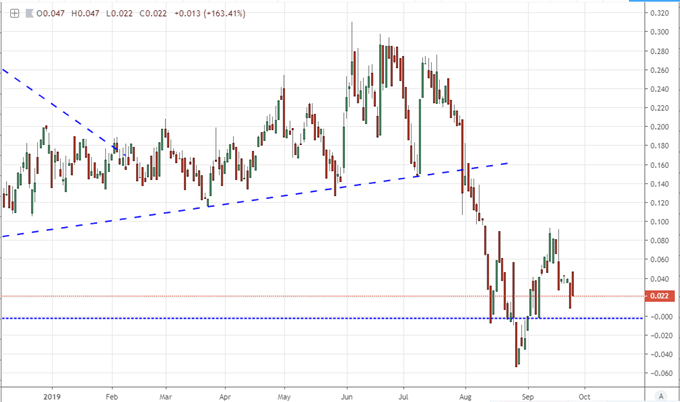 For monetary policy, there were just a few updates of material interest. Bank of Japan Governor Kuroda was speaking early Tuesday suggesting further easing could be pursued through short-term and medium-term rates - in contrast to their QE target of a 10-year JGB yield at zero. While this could translate into a significant infusion of stimulus into the Japanese and global system, the already record-breaking exposure (as a percentage of GDP) is cloaked in fear of ineffectiveness. In contrast, RBA Governor Lowe seemed to throttle expectations of imminent easing, but that 'relative' hawkishness doesn't rise to the scale of global influence. the Australian Dollar on the other hand reaped the rewards. As for trade, President Trump reinforced a high-standard for a deal with China, but USDCNH was unmoved. 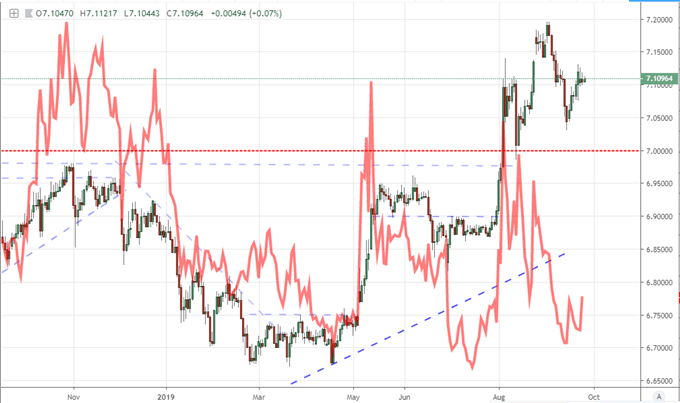 A more headline arresting theme to contribute to the short-term risk impact were the reports that the House of Representatives would officially start an impeachment inquiry into US President Donald Trump. This headline drips in social drama for the polarizing leader, but its market implications are dubious on the outset. What material impact will this carry over the prevailing themes in the open market? There are no tentative growth-oriented projects on the fiscal side in the wings - besides a supposed tax cut discussion some time next year. On the other hand, this could easily turn into a distraction which draws the President's attention away from trade wars or conversely encourages more aggressive pursuit to secure a campaign win. Ultimately, the most potent risk is for already frail sentiment in the markets with prices deviating from value to finally crack under the additional weight.

Outside of the systemic, there are a few fundamental highlights worth their salt. This past session, the UK's Supreme Court ruled that Prime Minister Boris Johnson's suspending Parliament was unlawful. According to the ruling, the PM's intent was not to establish a platform from which to negotiate the Brexit with the EU but rather to sideline Parliament's ability to weigh in on the country's position. The Sterling eased higher and Sterling-based volatility measure eased after the news, but there isn't a clear trend to draw on. The UK's negotiation position hasn't formally changed with a no-deal default risk still prominent but five weeks with which to work. 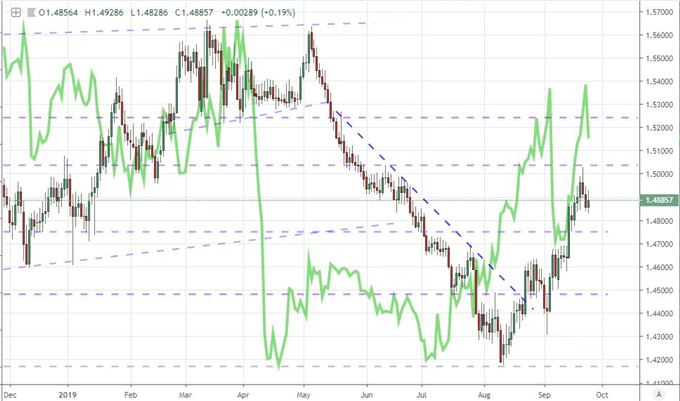 More concentrated an event risk is the Reserve Bank of New Zealand (RBNZ) rate decision. The Kiwi Dollar has experienced systemic tremors recently as the market registers the risk that the currency's position among the majors is in jeopardy. Why is this relatively illiquid currency with a far smaller economy considered alongside the likes of the Dollar, Euro and Yen? Because of its high sovereign credit rating and exceptional rate of return. The latter aspect of its position is in serious jeopardy though if the group moves forward with a steady reduction in rates and/or unorthodox policy. Other event risk to consider ahead is the CBP's regular global trade report. Given the recognitions of 'costs' on systemic issues like global trade, traders should beware. 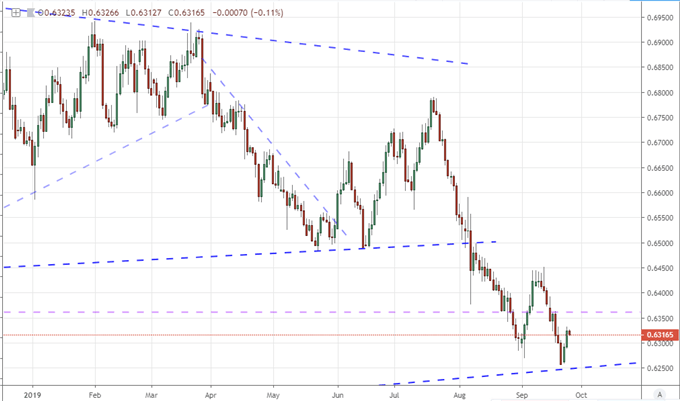