A US Dollar Break Looks Clear, What About the S&P 500?

As we prepare for a new week of trading, breakout pressure seems a remarkably common affliction for much of the market. That is a situation resulting from technical patterns simply running out of room to move and a persistent tide of fundamental charge that threatens to eventually trigger a pocket of fear of speculative appetite. Two of the most well-placed benchmark assets for technical clearance are the Dollar and US indices - though a spark does not guarantee a fire. For the Greenback, there is an inevitable 'break' that will result from the DXY and EURUSD simply running out of technical room to maneuver. A wedge formed by the DXY Index over the past three weeks will hit its terminus by Thursday or Friday this week, but the average daily range suggests we will force a border through the first 48 hours. A break lower would likely offer up the most potential as it has the most room to run before coming into the larger 15-month rising trend channel support. As for the fundamental catalyst, the stewardship for this currency has been remarkably unreliable - an issue that could readily scuttle follow through. 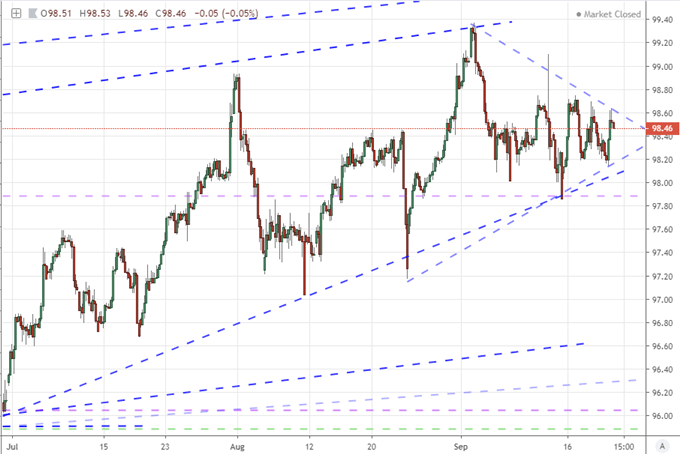 In contrast to the Dollar, US indices represent the opposite end of the traditional risk spectrum as a favorite capital gains-bearing asset. Using the S&P 500 as the baseline, the level drawing the greatest scrutiny is the combined wedge high starting with the February 2018 peak which is roughly in line with the July swing high which happens to be an all-time-high for the index at roughly 3,030. Clearing a record is difficult enough, but inspiring a new trend at these already extraordinary highs would require a greater fundamental motivation. The short-term inspiration usually found from monetary has already had its chance to bolster bulls, a revival in hopes for growth is far-fetched and a seismic shift in trade wars would necessary to alter our present course. So, while the upside potential is robust - and perhaps slightly more likely given the big picture trend - the more potent move in technical terms and through favorable fundamental scenarios would be a drop through nearby 2,980 and perhaps move to 'close the window' formed in the gap above 2,940 at the beginning of the month. 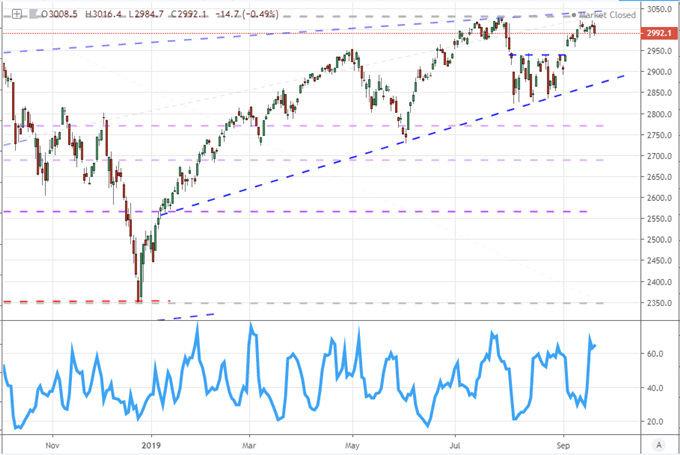 Recession Fears Have Regained Traction with PMIs to Start the Week

As we take stock of the broader market's motivations, the fundamental currents will prove varied and as fraught as navigating through Bermuda Triangle. There is plenty of scheduled event risk ahead and numerous active themes, but the most probable forge will find these two means converging. In particular, I will be watching the market's assessment of global economic health. This past week, the OECD significantly downgraded its global growth forecasts for 2019 (2.9 percent) and 2020 (3.0 percent) with painful reductions in the outlooks for the US, UK, Euro-area and China. Heading into Friday close, the New York Fed offered narrow wedge of optimism by upgrading its Q3 US forecast from 1.6 to 2.2 percent which finds some measure of reinforcement from the improved performance of regular US data (Citi's Eco Surprise index for the US has turned positive after a long stretch in negative territory). That said, a Gallup Poll for September showed Americans are increasingly concerned about the state of the world's largest economy and open market search via Google shows definitively elevated fears in 'recession'. 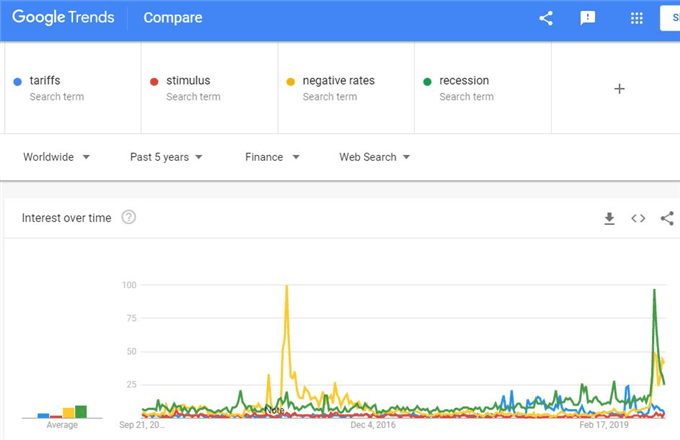 Looking for milestones for evaluating economic activity moving forward, we don't have to look out too far. The week opens to a run of September economic activity reports. The monthly PMIs from Markit and various other data aggregators are remarkably consistent in their alignment to the less frequent, official GDP updates from governments. On tap Monday, we are due the latest update on manufacturing, service and composite activity for Australia, Japan, the Eurozone (with Germany and France) and the United States. If the data is mixed, the market will evaluate the figures individually and carry relative performance implications for various currencies. Alternatively, if the data is uniform in besting or falling significantly short of expectations, the market can register a more systemic response in 'risk' assets.

As far as the anticipated punch of scheduled event risk, this past week was seen as the pinnacle of monetary policy as a theme. After the ECB lowered its benchmark rate another 10 bps to -0.50 percent and signaled a restart of its stimulus program on September 12th, the Fed answered with its own cut this past week. Back to back rate cuts from the world's largest central bank despite expectations for no changes in the June SEP (they are still projecting no additional moves in 2019 with the September update) defied convention and has failed to translate into the speculative appetite we've seen in the 'front run the central bank' effort in previous years. Boston Fed President brought to the forefront the foundation to this disconnect when he warned that easing at these levels and against these conditions carried costs - such as over-indulgent speculative market pricing. This is not a US-specific phenomenon. Global imbalance is a true affliction. On tap, we have a few key data points (like the US PCE), but it is the sheer number of high-level central bank speeches (including the heads of the ECB, BOE, RBA, BOJ and more) on tap that carries the most risk/promise. 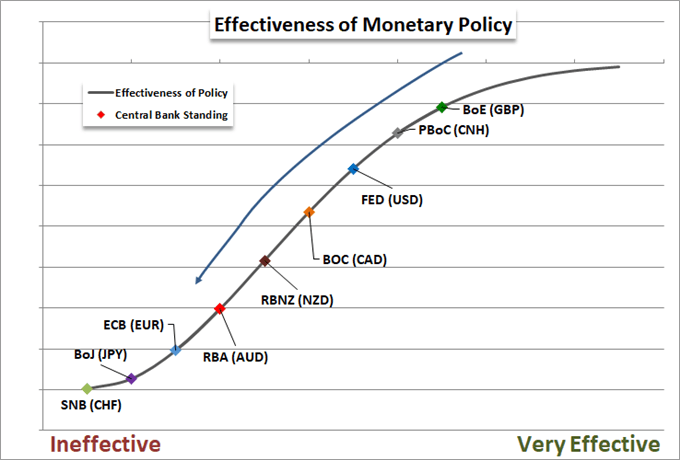 Even further removed from convenience of scheduled updates is the situation around trade wars. These past few weeks seemed to have placed us on a path towards steady warming in the US and Chinese relationship - though it was more a curb on fresh pain rather than a genuine reversal of their troubling course. Chinese deputies arrived in Washington this past week to restart negotiations and things seemed to be going well until Friday afternoon when President Trump's remarks reinforced the 'all or nothing' approach he intended to take with talks. It seems his remarks struck a nerve as the markets jogged lower - gold higher - on reports the visiting Chinese delegation had cancelled scheduled visits to Nebraska and Montana. Another matter to keep an eye on through the first half of next week will be geopolitical risks' pull on markets through both growth and speculative stability avenues. It was reported late into the evening Friday that the US had decided to send troops to the Middle East in response to the attack on Saudi refineries allegedly perpetrated by Iranian forces. 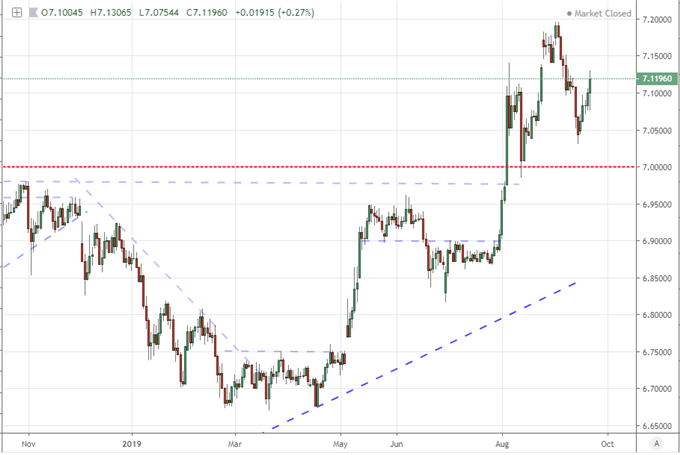 Keep Tabs on Gold, The Kiwi Dollar at Multi-Year Lows and Pound with a Brexit Decision

For targeted markets to watch for more narrow fundamental transmission into price action, gold remains one of my principal barometers for our general market state as well as one of the most thoroughly appealing hedges. The precious metal is considered a straightforward safe haven, but its real value comes in its draw as an alternative to traditional stores of wealth. Given the ECB and Fed cuts recently and the general state of extreme and seemingly-boundless easing, finding steady value for capital is proving difficult. In this backdrop, gold is proving its mettle over and over. 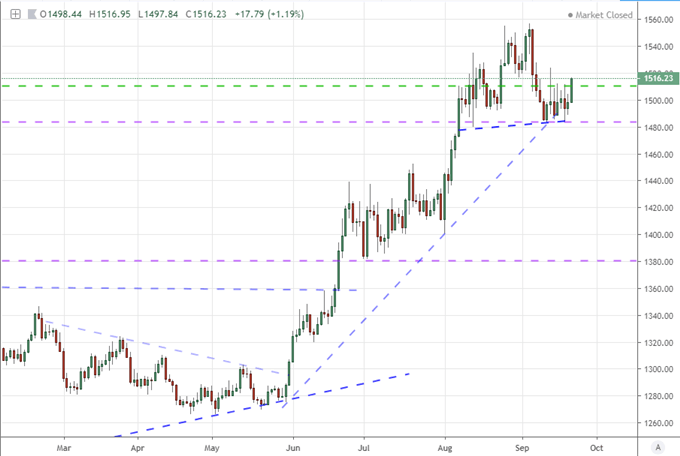 For remarkable technical moves already unfolding, the New Zealand Dollar is in the middle of a dive. This past week, NZDUSD, dropped to a fresh multi-year low and it is dangerously close to a range support that can in turn tip us to trading territory not seen since the Great Financial Crisis. What is deflating the currency so thoroughly? Its general loss of status as a highly-rated carry currency. While its sovereign credit rating is not seemingly at risk (yet), the outlook for its 'dividend' is collapsing. As it happens, the RBNZ is due to weigh monetary policy this week and last time the group said it was keeping open the options for more extreme support. 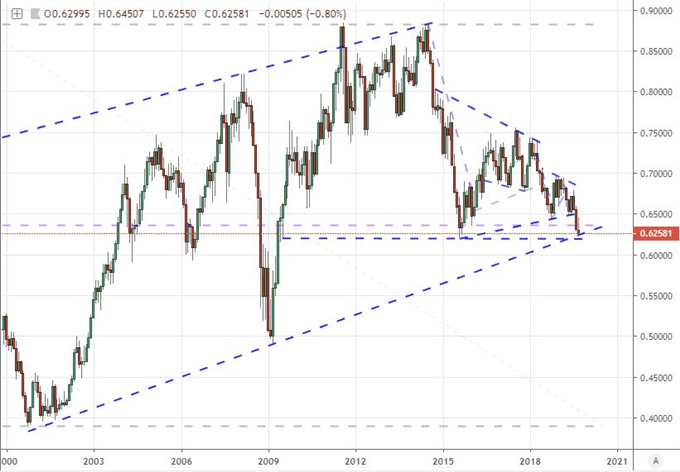 Finally, traders should keep a weary eye on the headlines and the other on the Sterling. The British Pound has enjoyed an incredible climb these past weeks despite the 'proroguing' of Parliament and Prime Minister Johnson's commitment to keeping a 'no deal' solution in the mix for the Brexit menu. Even an uneasy period of respite seems enough to allow a depressed currency to bounce. That said, we may find another milestone over the coming week that shakes up the calm. There is vigilance being kept over the UK's Supreme Court evaluating the legality of Parliament's suspension. Time is running out quickly, but it seems some are intent on ramping that pressure up even further. To counterbalance the tension added by Johnson, Finnish and French leaders agreed this past week that if an alternative proposal to the Backstop was not delivered by the end of this month, it was essentially a lost cause. 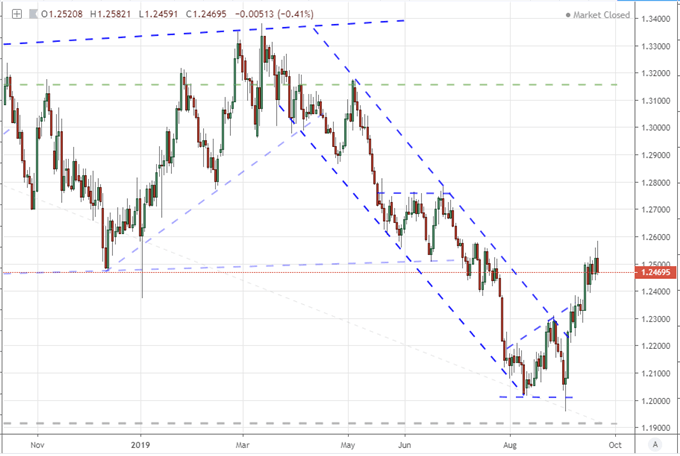