We have absorbed a remarkably fundamental-heavy week, generating bombastic headlines and a significant level of market volatility. And yet, key markets have refused to budge from their pressurized technical bounds. Perhaps the geopolitical risks that we opened the week to and the monetary policy escalation - along with the focus on its fading effectiveness - are themes not yet in command of investor sentiment. On the 'risk' side, the fact that the Federal Reserve cut rates in consecutive meetings despite projecting no changes through year-end as recently as June doesn't seem to offer enough opportunism - much less genuine enthusiasm - to return the US indices to record highs. That is particularly remarkable as we were within 0.2 percent of all-time high intraday Thursday. As we hold this upper threshold, the 10-day range (as a percentage of spot) is starting to look strained given the maintenance of volatility (measured through a 10-day ATR). A breakout is highly likely in the near future, though tough for a Friday, but that does not guarantee follow through. 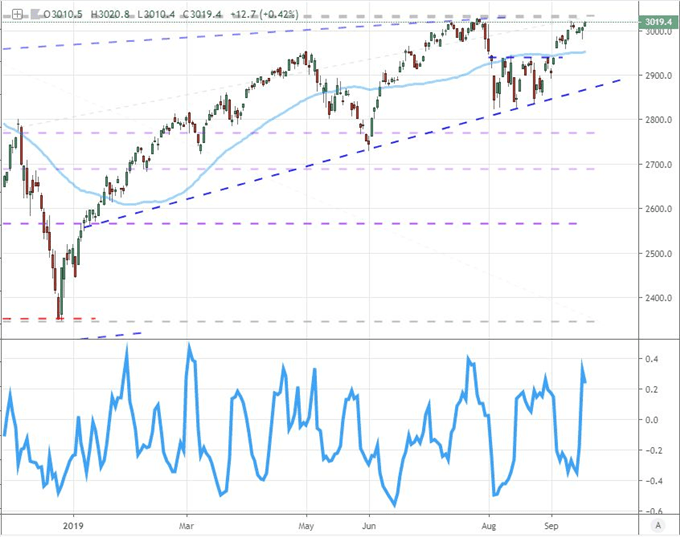 The breadth of complacency that has built up over the past years perhaps mutes our surprise that the markets are blasé about otherwise significant fundamental developments. Yet, the Dollar's own aloofness remains particularly surprising. A rate cut is typically a detriment to a currency as it lowers its yield, but the context is still a measured easing while some key counterparts - Euro, Yen - are being showered with accommodation in the form of negative rates and/or stimulus. Regardless, the DXY Dollar index has worked its way into a wedge within a much larger and longer-lived rising channel. Here too, the probability of a near-term breakout is high, but the potential run after this hurdle is cleared would still find us stranded in the middle of a larger pattern. So, while a breakout is nigh, I wouldn't immediately consider such a development a cue for a new trend. That is particularly true given the confusion as to what fundamental theme is most important for the currency - haven, rate cuts, trade war isolation or economic uncertainty. 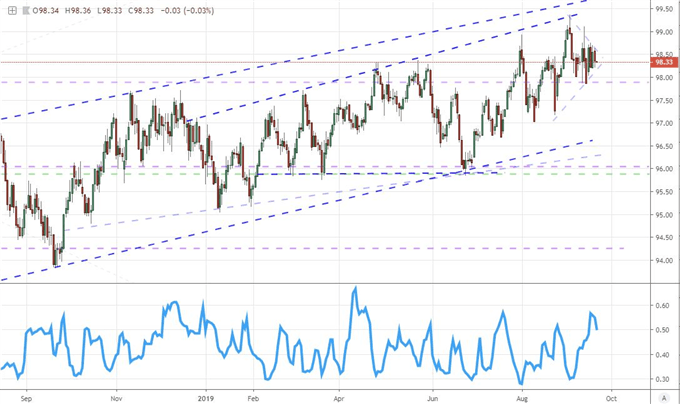 The run of central banks to update policy this past session drew far less attention and market response than the Fed the day before or the ECB last week. It is difficult to register a global impact more substantial than the world's two largest banks following rate cuts from each. Of course, I maintain that the most important aspect of monetary policy is not the relative considerations but rather its collective contribution to or diminishment of the fading outlook in more rudimentary economic and financial conditions. This past session, two of the most extreme doves held course despite their larger peers easing which raises questions over the potency of their remaining capacity. It is hard to determine whether it would be worse if confidence in stimulus-borne growth fails after a refusal to offer support by a key player or despite their providing more lift. 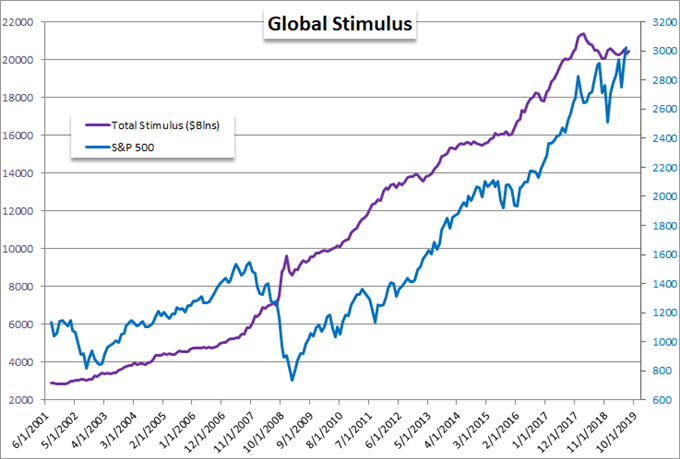 At the extreme end of the monetary policy curve, the reticence of the Swiss National Bank and Bank of Japan to expend any further credibility to earn no additional benefit to economy or financial system is not surprising. That said, the SNB is attempting to support banks struggling with negative rates and the BOJ is reportedly considering action as soon as next month - and perhaps through deeper negative rates. The Bank of England's hold surprised no one, nor did their warning of "entrenched uncertainty" owing to 'no deal' fears. Perhaps the most unusual decision to come out of the run was the Norges Bank's decision to hike rates. This is actually the fourth 25bp hike in 12 months. Their reference to local economic performance that deviates widely from Europe and other troubled areas of the world is to be expected, but the reference to balanced monetary and fiscal policy seems a dig to what plagues us globally. Further, the authority's head called out the willingness to expand accommodation to extremes as a signal to markets of pain and fear.

With Thursday's close, the monetary policy theme will lose considerable traction. It will not totally dissipate however. There are a few notably rate decisions next week; but more importantly, there is a deluge of high-level central bankers set to speak throughout the week. Yet, in the meantime, headlines can effectively draw our collective short attention span to more immediate matters. One such familiar thee that was flashing in front of our faces this past session was the OECD's updated economic forecast. The group lowered its global growth outlook to just 2.9 percent through 2019 and a slightly higher 3.0 percent in 2020. It was previously defined by the IMF that any global pace under 3.0 percent was essentially recessionary territory. In the meantime, downgrades for the US, China, Euro-area, UK and more reminds us of the fragility in sentiment.

Trade wars was another matter that was throwing out warnings but still managed to fly below the radar of any nervous investors. The FedEx earnings quoting the pain from trade wars with a miss in numbers and downgrade in forecast found the stock hovering just above a much more significant support. Meanwhile, it was suggested by a White House adviser to a Chinese news outlook that the President was ready to escalate the trade war between the countries if a compromise was not found soon. If we were looking for any good news, Japan looks to be on a charm campaign to get the US to agree to a new trade agreement before the end of the month. Good luck. 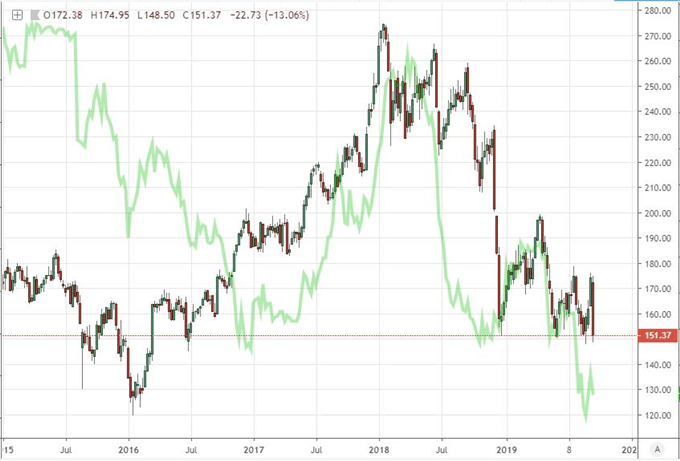 As far as remarkable moves outside of the high-level themes. The Sterling stood out as a remarkable bullish performance. The currency climbed against the Dollar which could be interpreted as monetary policy differential, but in fact, the Pound broadly rose through this past session. That is somewhat remarkable given the BOE's familiar warnings were reinforced by the OECD warning the UK economy could take a 2 percentage point hit in the event of a no deal Brexit while French and Finnish leaders are apparently in agreement that there is no deal to be found if there is nothing in hand by end of month. How does the market rise through this? Momentum behind reversing the aggressive devaluation of the Pound this year finds room to run without a clear date to define next steps in the divorce while the end date is still 'in the future'. This complacent advance won't last for much longer though. 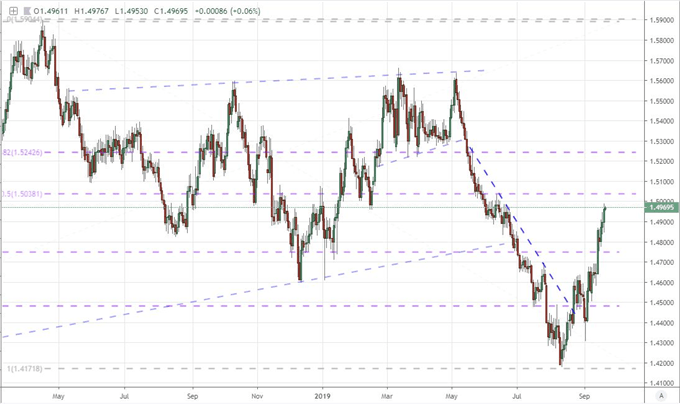 Another unexpected performance would come from the Australian Dollar which was the worst performing major. The slide is more remarkable given that country's employment update was a significant beat with 34,700 jobs added more than doubling the forecasts. That said, the OECD's updated forecast for the country was acutely troubling. More important though is the quickly dropping outlook for monetary policy from the RBA. Rate cut forecasts are rising quickly, and the already deflated currency is losing the little air it managed to claw back recently. 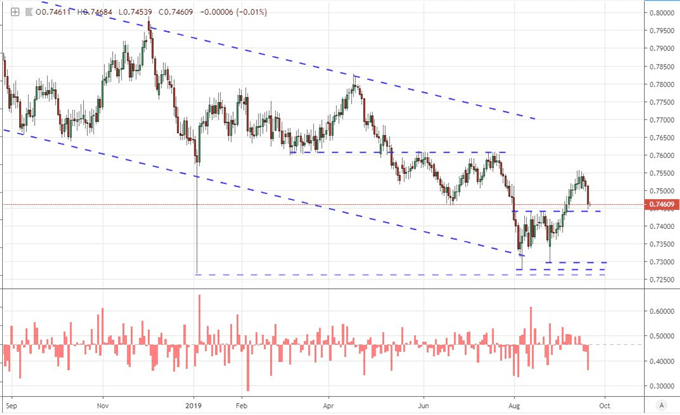