A New Fundamental Threat Bursts Back Onto the Scene

Over the past few months, we have had a discreet rotation of fundamental influence from one overbearing theme to another. From trade wars to recession fears to monetary policy, the speculative yoke was passed between key scheduled events to unexpected breaking developments. The influence of these themes is significant largely due to their scope of influence, their slow resolution and yet consistent presence in the financial landscape. I suspect that these three matters will still be moving markets for months to come, but they will not be the limitation of global fundamental discharge moving forward. This past session's headlines stood as testament to that. Geopolitical uncertainties proved the principal focus this past session - so much so that it drowned out 'lesser' developments that could have pulled market interests in more traditional directions. The largest bullish gap in crude oil going back 10 years and the fourth largest single-day jump in the commodity's history helped to target the top fundamental listing of the week if the headlines didn't give it away. 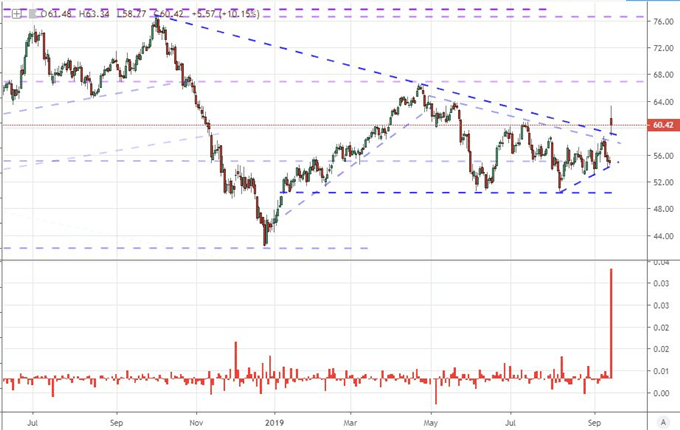 Reports of multiple attacks on Saudi Arabia's oil production facilities steadily raised concerns over the commodity's price come Monday's open as the extent of the damage was reported. The attacks spanned 17 strikes on two of the country's refineries which the government assessed would impact approximately half of its total production. That in turn would translate into 5 percent of output of the vital natural resource. That is a supply hit that can actually move the needle versus the seemingly insurmountable supply glut that has plagued OPEC recently. Yet, was the cost of such a vital resource really the basis for the market's pained response? Looking to the implied (expected) volatility measures for key assets, we see that the new front to speculative complacency didn't seem to throw investors completely off their course. 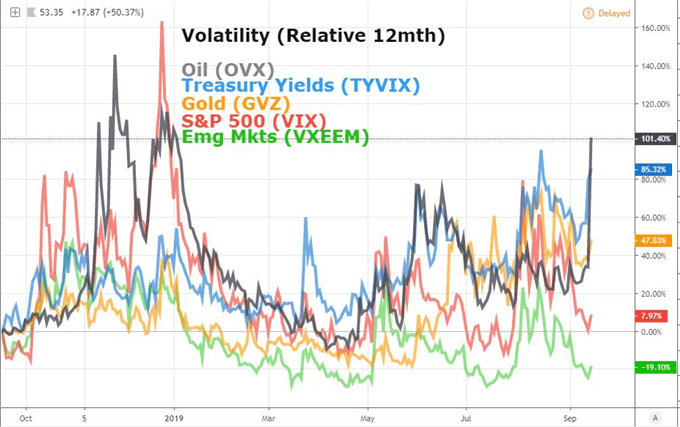 Ultimately, the systemic risk which unfolds with the least warning generates the greatest volatility in the financial system. When it comes to the risk of a military engagement that involves Iran and the West, there is little discount that will absorb the shock of escalation. Despite Yemen's Houthi rebels claiming responsibility for the attacks, US President Donald Trump indirectly suggested it may have been Iran that put the machinations in motion. While he remarked that he had no interest in starting a new war, he went on to suggest 'sometimes you have to' become involved. Given the scope of scenarios surrounding this issue and the poor preparation for its turning cold economic war into hot military war, traders should keep tabs. That said, sans new milestones building pressure, there are known issues that wrest back our attention - and temper our volatility - dead ahead.

If global tensions don't continuously distract global investors, the relentless march towards a run of major central bank rate decisions over Wednesday and Thursday will steadily steal attention. This past session, conviction in a back-to-back Fed rate cut (with the July reduction, the first in a decade) deflated even further. A week ago, there was virtual certainty for another 25 basis point (bp) cut. This past Friday, following a stronger-than-expected, 2.4 percent core inflation reading; the market's assessment of that cut dropped to 79 percent. On Monday, despite the fresh global uncertainty, those chances were lowered to 65 percent. The speculative fervor is quickly converging with the central bank's own reticent posture following the heavily-speculated July cut, around which the 'mid-cycle adjustment' language was used heavily. Even further out, the Fed Fund futures market has shown a significant drop in anticipated easing through December 2019 but it is the sharp drop in 125 bps of cumulative cuts between now and end of 2020 which has dropped to a present 87 bps that shows the penance the market is willing to pay for its largesse. 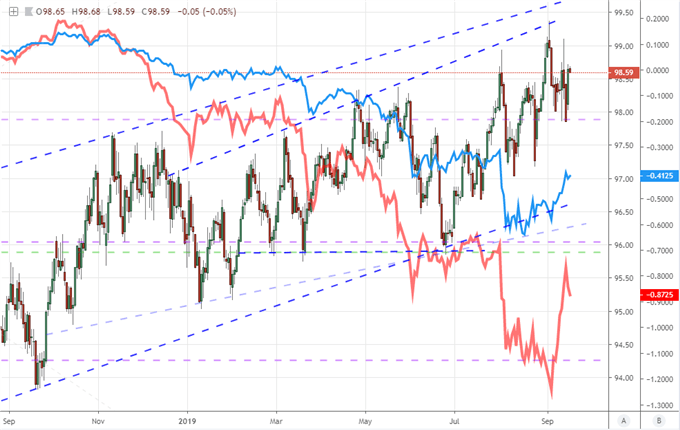 What the US central bank does this week can hold profound implications for the Greenback and US assets, but it is crucial to keep site of the bigger picture at play. The world's largest central bank happens to also sport one of the most influential, relative hawkish stances. If this group refuses to conform with its more accommodative counterparts - ECB, BOJ, SNB - it will undermine the trance of complacency that such external support can create and ultimately call into question the broader dependency built upon these temporary struts. The Bank of Japan's weighing negative rates is particularly important in this context while the Swiss National Bank and Norges Bank will have to decide whether to keep pace with the ECB who upped the ante last week. 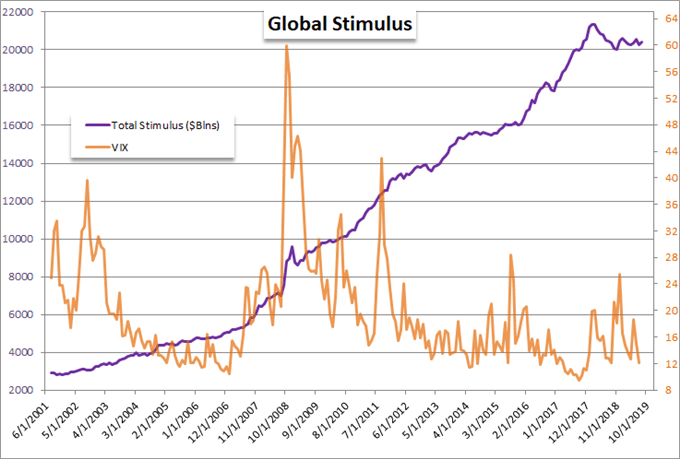 As the monetary policy pressure builds while the hours dwindle before the Fed starts the central bank rush, it will be increasingly difficult to muster significant impact to spur even short-lived volatility. Nevertheless, we must keep clear taps on the other chief fundamental matters unfolding in the market. To open this new trading week, there seemed to be a crack forming in the otherwise flimsy confidence based upon hope that the US-China trade wars were on a steady path towards resolution. While we still have the reciprocal 'good will' measures between the two countries this past week and scheduled deputy level discussions due to restart Thursday, it seems some measure of confidence that an interim deal would be struck was dash when it was relayed by a CEO that attended Trade Representative Lighthizer's update to business leaders that there was no interest in such half measures.

The other systemic matter that continues to bubble up from the core of value is the eroding view of the global economy. We are due growth updates from a number of the central banks who will announce their policy moves this week, but it is the Fed's Summary of Economic Projections (SEP) that will land the heaviest impact owing to the economy's size and the transparency of its update. In the meantime, China's run of August data left us seriously lacking for enthusiasm. Nothing flipped negative, but industrial production - the life blood of the economy - slowed to its weakest pace in 17 years. To back that up, Chinese Premier Li warned in Russian media that it would be difficult to maintain growth comfortably above 6 percent moving forward owing to external risks. A reminder that the 2Q pace already eased back to a three-decade low.

As these overbearing uncertainties and the anticipation, it feeds push and pull at the bulk of the market, it is always important to keep site of those assets/currencies/regions that can operate outside the gravity of these few unresolved themes. Two currencies that still present an interesting technical and fundamental picture without the standard breath-holding before Fed update are the Canadian and Australian Dollar. The Loonie showed a remarkable gap in response to the oil news and move this past session, yet follow through again depends on similar severe moves from crude stretching in to the future - unlikely. The Aussie Dollar's 'risk response' to the same event was even more reserved and doesn't substantially put off the slow recovery from a deep discount fed through the past few weeks. When selecting pairs of merit, it is important to look for counterparts that won't simply fall into Fed decision, trade wars or recession fears; so perhaps consider AUDCAD... 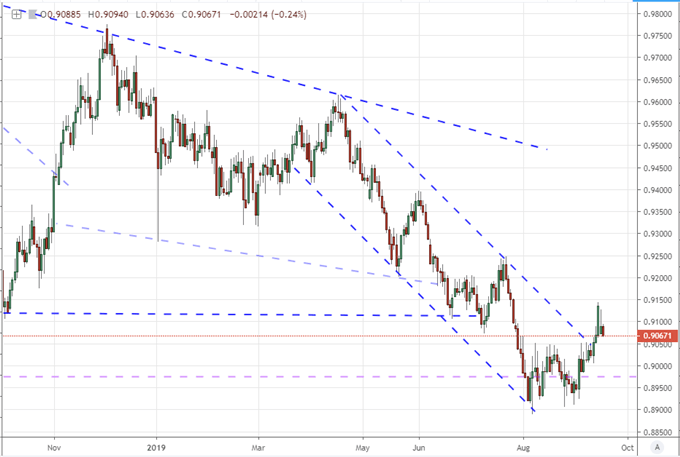 Sterling continues to fly its own fundamental flag as well - though that does not promise quiet markets. UK Prime Minister Boris Johnson met with EU Commissioner Jean-Claude Juncker yesterday and the message was not exactly uniform. The PM said that progress was being made but there was still a ways to go. Nevertheless, he maintained that the United Kingdom would be leaving the Union on October 31st one way or the other. On that point, it remains unclear how the ruling over the legality of suspending Parliament will play out. Alternatively, Juncker said his counterpart still didn't have a clear plan to replace the backstop and that further meetings aimed at hashing out a compromise would depend on the UK bringing something tangible to the table. 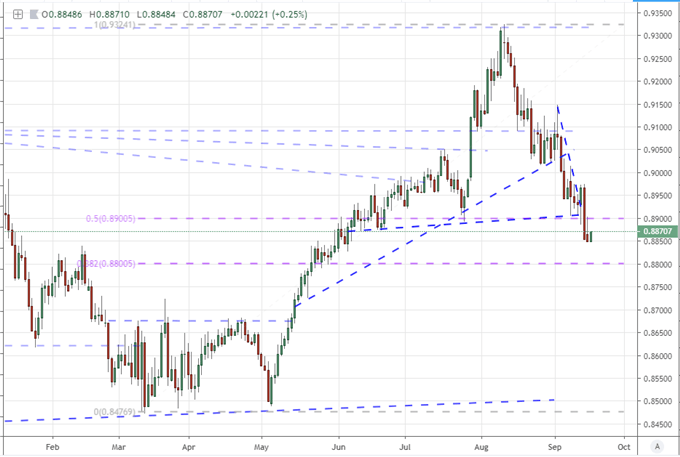