This Week's Most Market Moving and Systemic Event Risk: The ECB Decision

Looking out over the coming week to assess the trading landscape, we are still facing the slow build up in liquidity and volatility expected of September as we make our way into the active 'fall' season. That does not guarantee momentum, much less a particular direction, from the baseline of sentiment; but it does bring with it a sense of awareness. Investors are more observant of their surroundings and the risks, which would highlight a particularly unsteady backdrop of markets deviating from traditional measures of value and a range of systemic external threats pressing at the boundaries of our otherwise stable markets. Of the three high-level fundamental influences that I've been keeping close tabs on these past months, monetary policy will be at the top of my threat assessment and opportunity seeding lists for the next two weeks - so long as a trade or economic crisis doesn't erupt unexpectedly. 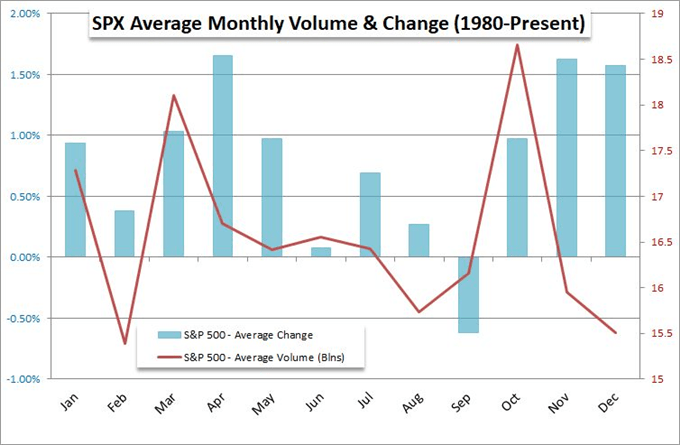 In the week after next, we are due a critical run of central bank updates from the Bank of Japan (BOJ), Swiss National Bank (SNB) and Bank of England (BOE); but the most globally-imperative of the meetings will be the Federal Reserve's September 19th conclusion. There is an inordinate amount of conviction for the world's largest central bank to escalate its accommodative efforts with a second consecutive rate cut with clear signal that another will follow in October. This is particularly remarkable considering the US central bank itself continues to offer up language and forecasts that seem to clearly signal their intent to withhold further easing unless absolutely necessary. This past Friday, Fed Chair Jerome Powell returned with his 'data dependent' mantra, suggesting he sees the economy doing well and inflation returning to target under current conditions. There is clearly contrast here that needs to be resolved, and that convergence will lead to volatility one way or the other. But for now, the focus on this particular bank's intentions will be turned down - and likely redirected - by the ECB's decision this Thursday. 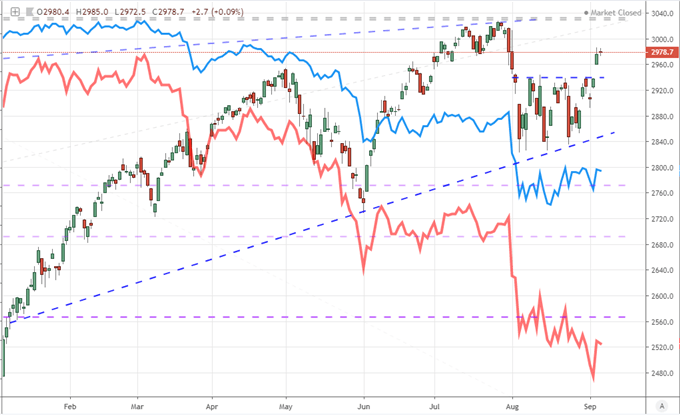 The European Central Bank (ECB) is drawing as much dovish anticipation as its US counterpart. Yet, for this group, there isn't much in the way of conflict when it comes to speculation and policy officials' intentions. Previous minutes and a number of members have signaled a dovish intent where anticipation of further rate cuts (into negative territory) and suggestion that fresh stimulus was being investigated suggests it will be a more comprehensive effort aimed at matching aggressive expectations harbored by speculators. This will certainly pose significant impact for the Euro. That said, it is likely to generate more traction for a 'softer-than-expected' policy update given that EURUSD is already trading near multi-year lows. Further, given the lift central bank efforts and promises have afforded global market traction against otherwise troubling economic conditions, disappointment can have broad implications. That said, I am more concerned of the scenario where the ECB and its peers do everything to meet the market's demands and the economy as well as the financial markets still deflate. 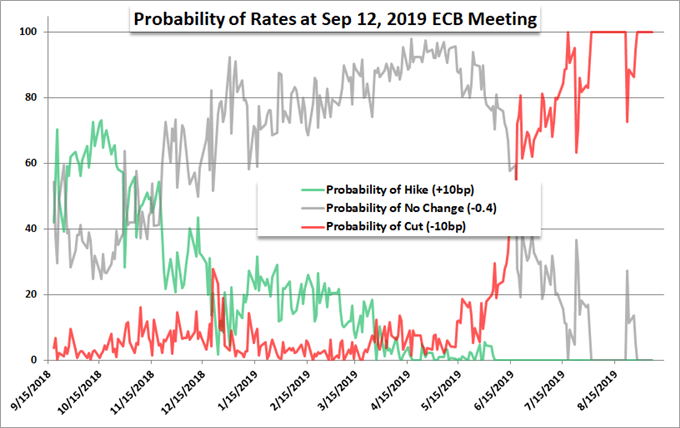 The Unpredictable Nature of Recession and Trade War Fears

Though not conveniently associated to high level event risk that can reliably alter the course of the systemic theme, it is important to further keep close tabs on any serious revival of recession fears or trade war flare-ups. For economic activity, we are not due any official quarterly GDP releases or PMIs for monthly proxy. That said, much of the traction in concern around the forward health of the global economy recently had centered on market-based measures. The US 10yr2yr and 10yr3mth Treasury yield spreads for example have sudden become mainstream conversation among traders. Then again, events like the ECB rate decision and data like the University of Michigan's US consumer sentiment survey can readily be interpreted for their growth implications.

Chart of US 10-Year to 3-Month Treasury Spread (Daily) 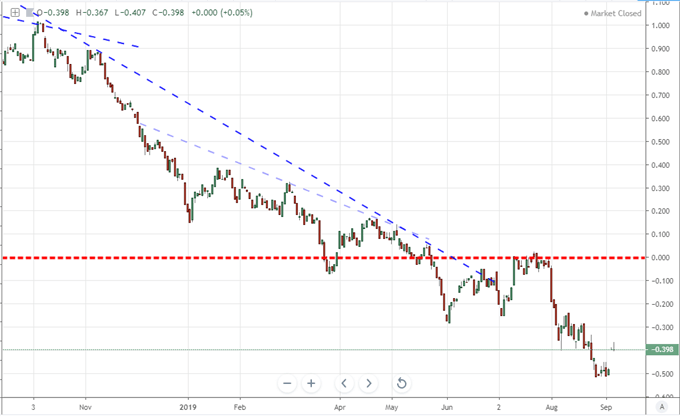 As far as the quality of being unpredictable, the trade wars are the epitome of surprise. Just this past weekend, the latest round of US and Chinese tariffs (on $112 billion and approximately $25 billion in goods respectively) went into effect. There has been no meaningful effort to de-escalate between these two largest economies since their economic fight began in the first quarter of 2018. And yet, this past week we have seen the market willing to revert to enthusiasm through the flimsiest reflections of optimism between American and Chinese authorities for progress to be found weeks into the future. History, however, should direct us to be very skeptical of their intentions and the impact a sudden slump in relationship can wrought. 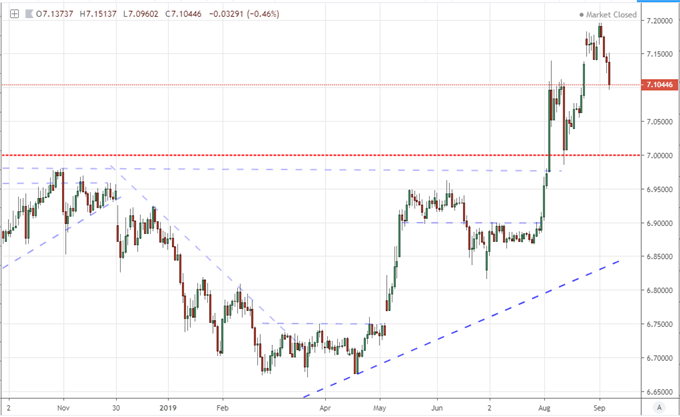 Mature and Nascent Trends that Will Strain Our Conviction

As monetary policy anticipation builds while we are put on watch for sudden shifts in recession fears and trade war actions, we are seeing some aggressive moves developing among critically exposed assets. The most stretched move from a speculative and fundamental position on my list is the current course of the US indices. The S&P 500 and Dow are only 1.7 and 2.3 percent off of their respective record highs following this past week's bullish break from August's restrictive range. While technically the path of least resistance, these risk benchmarks are charging far more premium in their reach than nearly every other speculative benchmark. While certain markets can certainly run a premium, pushing record highs is a different story altogether. 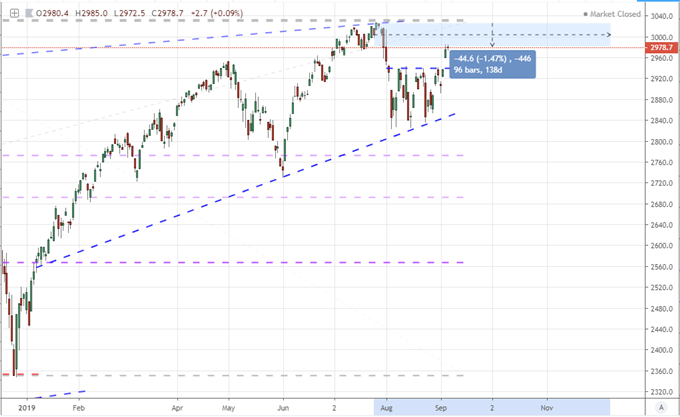 The Dollar is in a very different position. It is just this past week reversing lower from a two-year and threatening intent to extend its dive under a fundamental guise. Was the Greenback's rally a move a reflection of safe haven demand, deference for its carry premium or perhaps expectations of superior growth? The Dollar has seen its haven status threatened by threats of intervention by the President, market-based rate forecasts have ran on deep expectations for cuts and the favorite recession signals being used by traders nowadays (yield curves) are directly US-based. That would suggest the retreat from the USD is overdue, but there is little certainty that any of these themes will keep course nor that they will move in tandem. 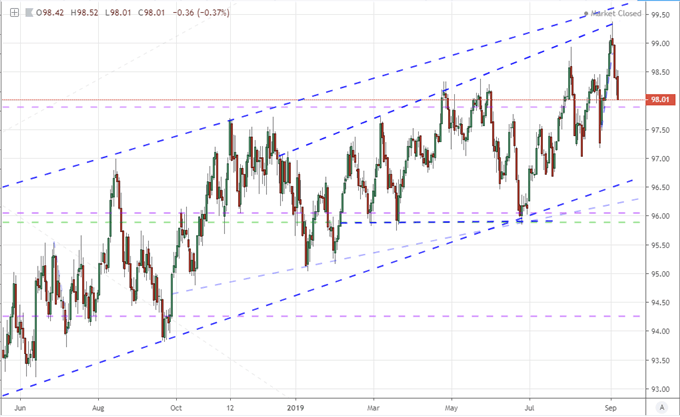 In contrast to the Dollar, we know what fundamental theme the Sterling is following. Brexit is far more important to the currency - and local UK assets - than virtually any other matter that is scheduled or simply predictable. In the week ahead, we have readings of monthly GDP, trade, employment, industrial production and construction output among other important figures, but they will not override the divorce proceedings. At the moment, it seems the Prime Minister's efforts to keep 'no deal' on the table to pressure the EU to negotiate is at risk from Parliament's positioning. Whether a deal is formulating or the UK government is simple finding its hands tied, avoiding a split with no plans to replace it will allow for a natural recovery. Of course, surprises are not uncommon with this standoff. 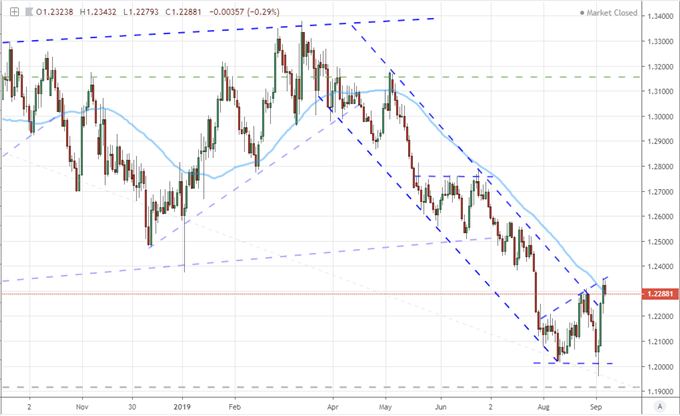 Dealing with systemic issues can translate into significant moves when the proper fundamental pressure is applied, but uncertainty can lead to just as much confusion and throttling of market potential. It is useful to look elsewhere to find options that aren't as existentially burdened and can simply follow the predictable lines of scheduled event risk when they arise. The Canadian Dollar through Friday was such an example. The combination of strong Canadian payrolls (81.1k jobs added versus 20k expected) and a robust manufacturing survey (60.6) offered a strong charge for the Loonie. Follow through on the other hand is unlikely unless some other fundamental motivation picks up the baton.

Other currencies worth considering include the Swiss Franc which was driven lower over through the past weeks and months with tepid effort to stage a reversal. If pairs like EURCHF don't stage a true reversal soon, momentum will force the SNB to act - and their effectiveness is under serious question. The Australian and New Zealand Dollars are two other currencies to consider. Connected to trade wars and left behind by monetary policy for the time being, the rebound from these two this past week offers meaningful potential but good reason for discount.