Risk trends received a significant boost this past session from the participation of the S&P 500, Dow and other US indices. Risk assets were already on the rise through the previous session, Wednesday, with notable lift to emerging market assets, carry trade and global indices; but these favorite measures of speculative conviction didn't clear their tight August ranges in tandem with these other markets. While it is certainly possible that these other asset classes enjoy lift without US equities or that the leader becomes the laggard, there is a certain measure of dependency that has been shifted onto the S&P 500's shoulders. In holding back the deleveraging experienced to varying degrees by so many speculative peers this past year-and-a-half, the signaling potency for this benchmark to hold back more committed selling can also throttle full commitment in a rally. 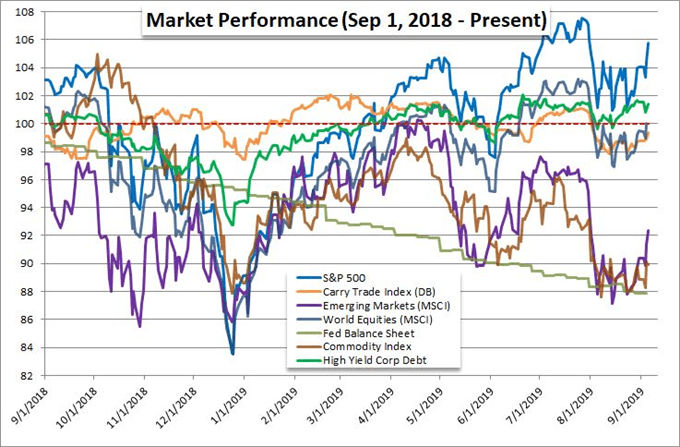 With pressure building between heavy swings these past five weeks to contrast with a frustratingly consistent range, it was inevitable that a break from the US indices was in the cards. As such, the rally through the 2,940 ceiling and the 50-day moving average was not exactly a shock. However, the chosen direction does bring with it a certain skew in potential. Though a path of least resistance in so much for that break itself draws it deeper into 2019's congestion (a large rising wedge), there is still a speculative and fundamental resistance to reviving the bulls in earnest. The recognition that the S&P 500 is less than 2 percent from its record and running an extraordinary premium to most other risk assets acts as a parachute to the other speculative markets, but it also acts to throttle index to subsequent waves. Furthermore, anticipation of seasonal underperformance (September is the only month that the market has averaged a loss since 1980) hangs over bulls like a fog. Ultimately, my chief concern for gaining genuine confidence is the unrelenting pressure of systemic fundamentals. 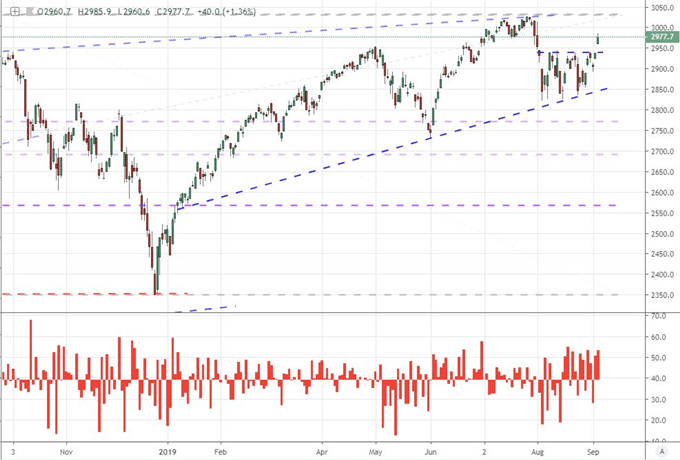 Trade Wars: You'd Think Markets Would be More Skeptical at This Point

Looking at lower time frame charts, we can identify better the timing of the bullish spark in sentiment this past session; and that can help establish the principal fundamental motivation behind the charge. The break from the S&P 500 can be seen in the in the emini futures during morning trade in the Asian session. Of the three top themes that have shared control over general sentiment this past year, the most relevant charge through the period was related to trade wars. Headlines confirmed from both Chinese and US spokespeople that the two countries intended to re-engage in negotiations in early October. According to China's Ministry of Commerce, the two had agreed to commit to tangible actions. Naturally, the Chinese Yuan, Australian Dollar and government bond yields all responded in kind with rallies of their own. 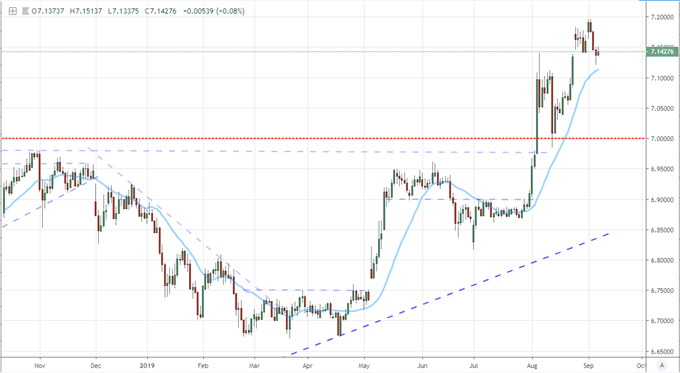 While a course reversal in trade wars would certainly earn significant good will from global investors, there is very clear reason to foster a serious sense of skepticism as to how much compromise the US and China will be able to muster. We have experienced more than a few phases over the past months where officials on both sides have voiced confidence that negotiations would continue and the spirit of compromise would be 'stronger this time'. And, each time, the good will either evaporates or the relationship takes such a turn for the worse that new sanctions are raised. Against the backdrop of optimism between Beijing and Washington, we should remember that just this past week, the US moved forward with taxing an additional $112 billion in Chinese imports at 15 percent while China moved forward with approximately a third of its threatened $75 billion in reciprocal taxes. We, in fact, haven't seen a material improvement in these countries' relationship in months. So, if this is the basis of our optimism, we should really weigh the risk/reward.

Sentiment was not totally dependent on the flimsy credibility of a change in course of the overbearing trade wars. A relief in the buildup of economic pain was eventually exhaled during Thursday's US session. Questionable commitment of more stimulus from Chinese authorities and the unmistakable pain felt in German data was effectively silenced by the service sector (non-manufacturing) report from the ISM. Accounting for approximately three-quarters of output in the world's largest economy, an improvement in this report is quiet the fundamental lever. The 56.4 reading was significantly better than expected and curbed fear anchored in the manufacturing figure earlier in the month. That said, the Markit figure for the same sector and period solidified its worst measure of business expectations since the series began in October 2009. Is there enough here to engender serious confidence in the US economy - much less the globe? 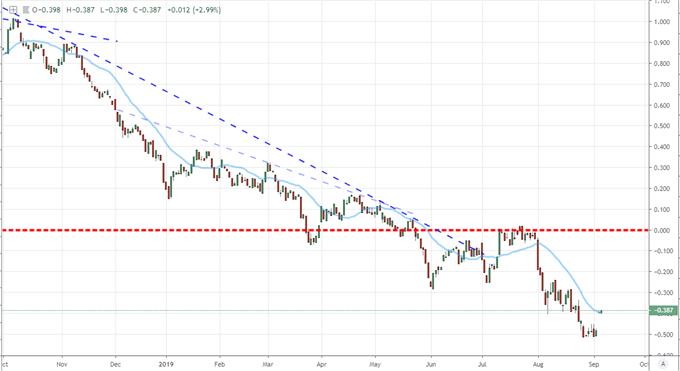 As we head into the final trading session of the week, it would be foolish to tune out trade wars and recession fears; but there is more definitively anticipation for the third theme to levy a substantial impact: monetary policy. On tap, we have two very prominent events to shape rate expectations for the world's largest monetary policy group. The August nonfarm payrolls (NFPs) and its accompanying labor statistics represent a key measure for monetary policy decision making. That said, employment trends are already running at full steam with perhaps some constraints on wage growth. It will therefore be difficult to truly impress on the labor front. In contrast, the Fed Chairman Jerome Powell is navigating dangerous territory considering he and his colleagues have attempted to cool market expectations for easing by labeling July's cut a 'midcycle adjustment', yet Fed Funds futures are pricing in two more cuts before year end and another three in 2020. Whether he tries again to cool dovish expectations or he caves to market demands, there is meaning to draw from his insight. 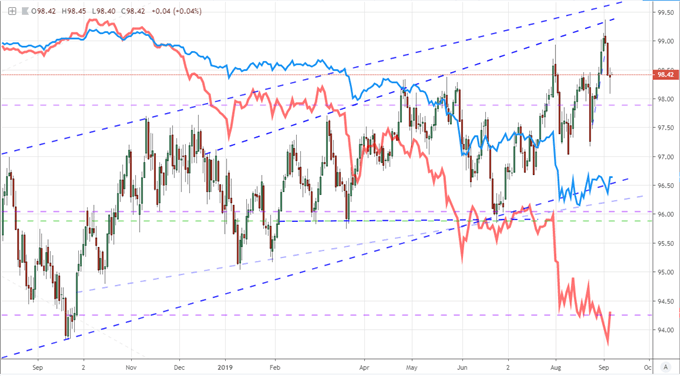 If you are looking for market moves that are more than merely theoretical and/or awaiting a substantial catalyst to put it into motion, then the Pound's recent rally is probably at the top of the list. The Sterling started its turn on Wednesday in the aftermath of Prime Minister Boris Johnson losing his majority support in Parliament late the previous evening. The GBPUSD rally following this development translated into the biggest single-day rally since March 13th. After Johnson attempted to force a snap election that would interrupt negotiations to raise a default no-deal outcome and Parliament resoundingly rejected the call, we saw the markets extend the rebound with a break through channel resistance and the 50-day moving average. Technically, Cable (and many of the Pound crosses) look remarkable with potential in excess, but committing to the recovery would be casting full belief in a definitive deferment of no deal.

Chart of GBPUSD with 2-Day Rate of Change (Daily) 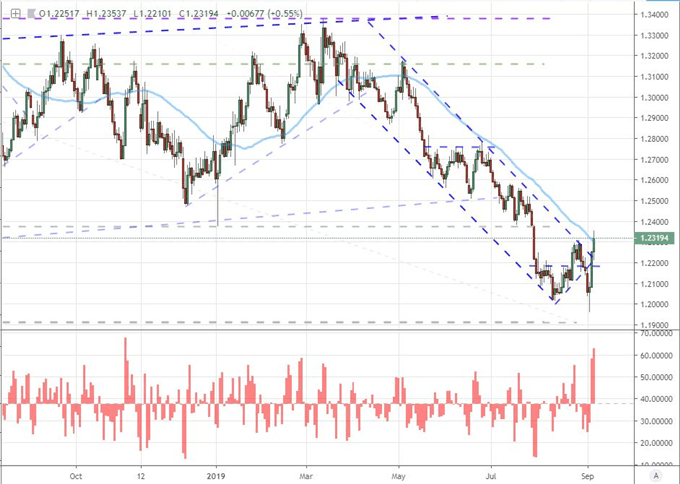 If we are more realistic about the recognition of volatility without the false pretense of trend that defies the general convention of the capital markets, the Swiss Franc put in for an impressive move Thursday that loaded pairs like EURCHF into a position of potential reversal. The spark was the 2Q GDP figure out of Switzerland which offered up a 0.2 percent pace year-over-year against the 0.9 percent forecast. Though there is some easing of safe haven demand and the Swiss National Bank (SNB) is a constant threat for intervention, a genuine breakout from EURCHF - much less lasting trend reversal - is far to much to expect. 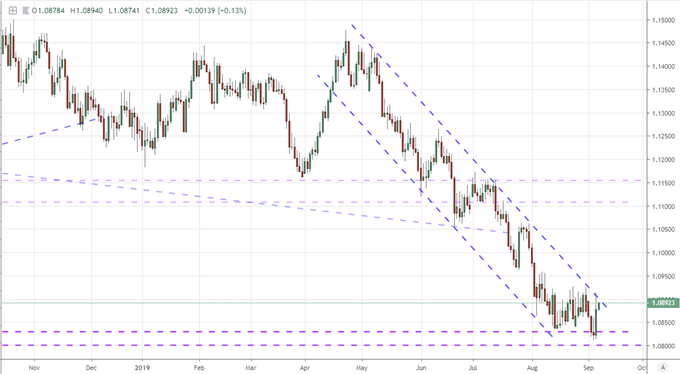 For the Canadian Dollar, the rally from Wednesday's Bank of Canada (BOC) policy decision in which they refused to bow to the rise in dovish pressure was already flagging this past session. That said, we have another opportunity to stir the pot before the week ends. Canada is due its own August employment data, and this figure has a history of generating meaningful volatility. Add the additional weight of a manufacturing report that can ride out the global growth focus tied into trade wars, and there is considerable potential. If both figures prove significant but opposite ends of the economic curve, it can effectively sidetrack volatility. If there is alignment towards weakness, I will be looking to pairs like GBPCAD; and if it is consistent improvement, a cross like AUDCAD would be well positioned. 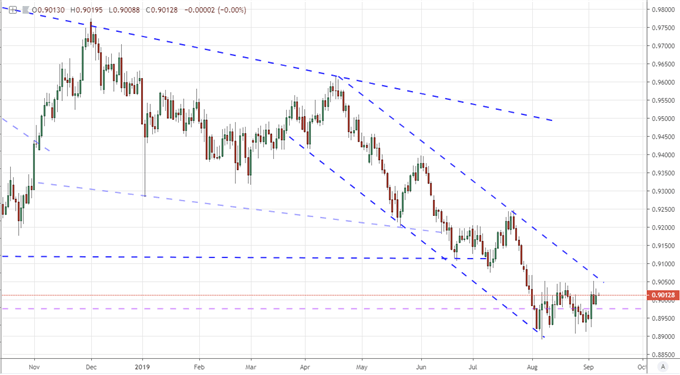