Dollar Tumbles, Pound Rallies and S&P 500 Ready for a Break

The most onerous and unresolved fundamental uncertainties of the past year continue to trouble investors' sensibilities, but in absence of directed fear and deleveraging we are finding the familiar return of speculative interests. Looking across the spectrum of risk-leaning assets, there were a few notable benchmarks that offered some early technical confidence to the otherwise directionless compass. Some global equity indices enjoyed a strong jog higher through Wednesday's session to a few notable technical breaks. The EEM emerging market ETF cleared resistance on its August range high (reinforced with two hanging man candles) and Yen-based carry trade appetite firmed with some chart-based guidance like that from USDJPY. However, where the speculative impact could be the most resounding - US indices - resistance is still in place. 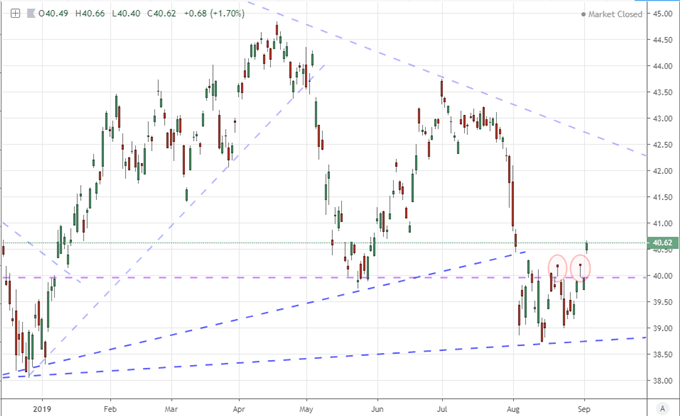 I am partial to the S&P 500 as a perfect but imperfect benchmark for risk trends. It is far from indicative of every ebb and flow in general sentiment across the financial market, but its underlying skew towards speculative build up makes it far more profound a measure. Equities are the most ubiquitous 'risk' asset in portfolios globally and the US is the largest market overall. Further, the S&P 500 (over the Dow or Russell) is the most heavily represented speculative index through derivative trading (futures, ETFs, etc). That makes it particularly useful in my opinion as a signal...of genuine fear and retreat rather than the casual drift higher in otherwise complacent conditions. And from his measure, we are still awaiting the cue. Realized and implied volatility - measured through ATR and VIX respectively - is still high while the tight august range has stretched to a 22nd day of restraint. This speaks to breakout pressure, and I'm watching diligently for the signal. 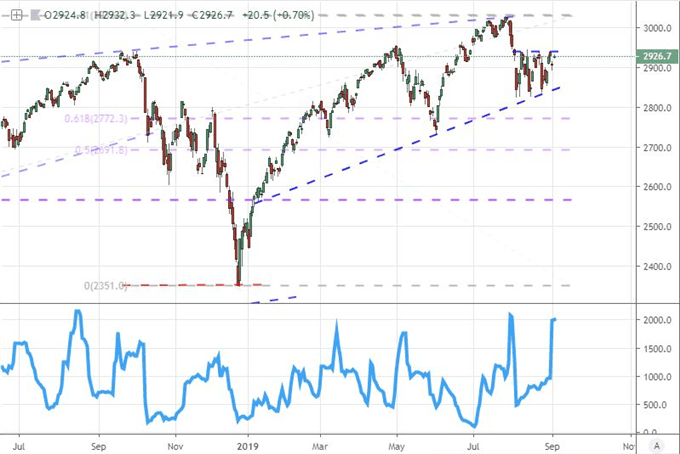 Yet, as speculative assets lean higher, it is important to recall the interplay of probability and potential. The probability (likelihood) of a bullish break above 2940 is perhaps moderately higher than a critical move lower, but the follow through from the bulls will contend with the contrast that most other risk measures reflect at a significant discount to the index and the maintenance of numerous systemic fundamental issues bearing down on the outlook for growth and reasonable returns. In short, a break is likely, but follow through depends heavily on direction. 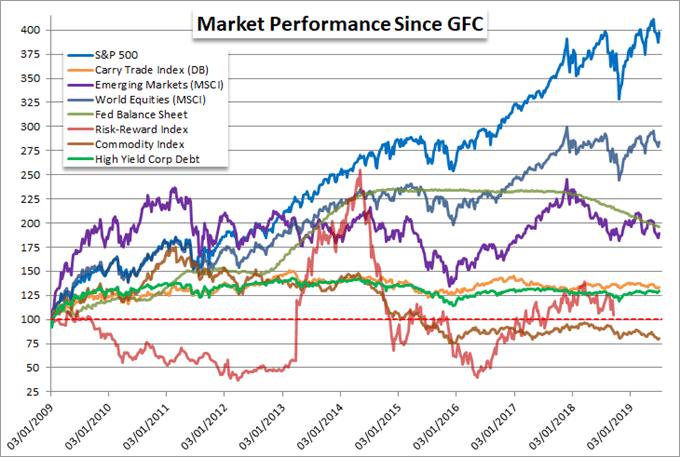 As we see some levity in traders' moods this past session, there must be an improvement or at least moderation of pain from one of the key fundamental themes dominating the headlines. Yet, there was little to truly latch onto. On the trade war front, the 24-hour news cycle seemed to offer less review of the new tariffs implemented by the US on China and vice versa from the weekend. President Trump was on social media trying to drum up support for his course quoting a controversial view that the US was subject to 'tariff terrorism for 50 years'. His suggestion that the Dow could be '10,000 points higher' if he abandoned the fight but "someone has to do this" reinforces the priority he set last month that a 'brief' recession would be worth a change in Chinese habits.

That course towards economic struggle seems nearly impervious to the day to day developments we see elsewhere. President Trump's suggestion that he is willing to risk an economic slump in order to alter the balance of trade before the world's largest economies should not be overlooked. On that point, results from a monthly survey conducted by Harvard's CAPS and The Harris Poll showed 57% of those that participated would blame the President should a recession occur in 12 months, 62% were 'somewhat' or 'very concerned' about such a development, and 74% believe the US is hurt more than China by the trade wars. That is not what the White House needs to keep the pressure up. Meanwhile, the 10-year to 2-year Treasury yield spread is back in positive territory but the New York Fed's latest update to its recession probability indicator (12 month forward and based on yields) is projecting a 38% probability of such a slump - and the 'hit' probability of readings this high is remarkably strong. 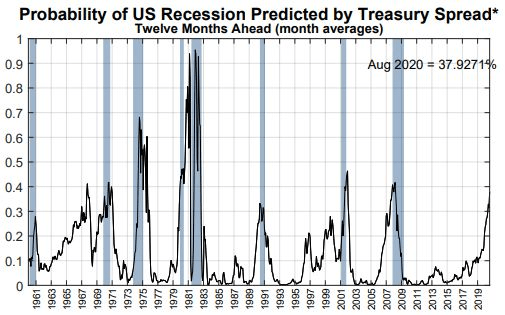 Naturally, as the risk of recession rises, the demands on support from central banks increases sharply. The vows of support from groups like the Fed, ECB, BOJ and BOE are not matching the mania however - and all four are due to weigh on policy over the next two weeks. This past session, a monetary policy remark that stood out came from ECB President nominee Christine Lagarde who was looking to appease German leaders. She suggested the central bank would look into the costs of unorthodox monetary policy like negative rates to ensure the effort is fully investigated. It is unlikely that she finds no serious downside to following this path, but strategically, does she admit its shortcomings and create more problems for her new vessel? 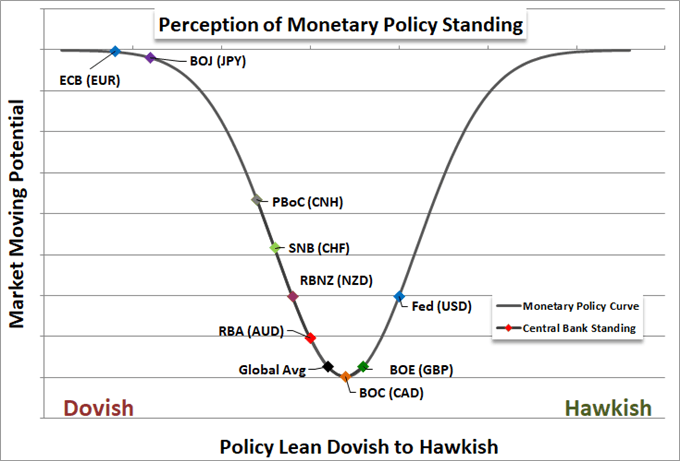 If you were looking for the more systemic moves in the FX market among these transitional conditions for the more systemic fundamental matters, the Dollar and the Pound stand out quite prominently. That said, only one shows serious potential for follow through. For the Greenback, a sharp decline this past session could find association to a few possible themes. The rise in risk appetite may seem a curb to the safe haven status of the currency, but the aggregate implied volatility of the FX market didn't actually cool this past session. Alternatively, expectations for rate cuts from the Fed did intensify through Wednesday - particularly through 2020. There were a few notable Fed speakers on the wires Wednesday, but nothing coming close to the heft of Bullard's suggestion Tuesday that the central bank cut 50 bps in one go to align to the market's views. Even if this were a driver, why is it relevant now? More likely, the Dollar is still being pulled between too many catalysts. 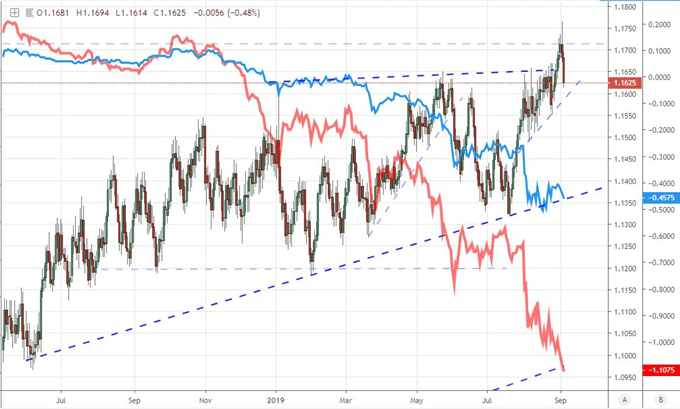 Ever the contrast to the overwhelmed US currency, the British Pound is a singular focus. Following the Tuesday evening rebellion that saw Prime Minister Boris Johnson lose his majority, Parliament voted (329 -300) Wednesday to progress through the first stage to delay the Brexit decision in order to temper a no-deal risk on October 31st. The PM responded by trying to force a snap election for October 15th which would position the UK into a position of a no-deal outcome by default should Johnson feel the EU has not capitulated. Instead, Parliament voted 298 to 56 to reject the pressure of an election. That does not write off a decision on October 31st much less a no-deal outcome, but it does improve the probabilities noticeably. The Sterling's drop these past months have not fully priced in the full fallout of true economic uncertainty in a rough divorce, but it has accounted for an inordinate amount of pain. A recovery for GBPUSD and other crosses is looking like a more productive potential-probability mix. 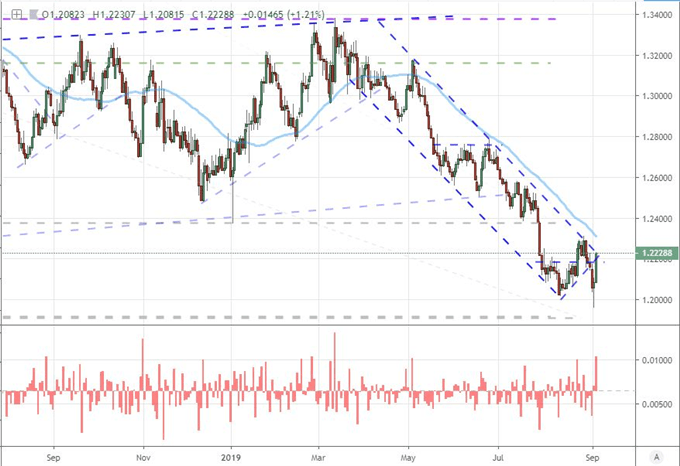 Impressive Australian and Canadian Dollar Moves, But Is There Follow Through?

For substantial market movement, there have been some meaningful moves to come from some of the 'commodity currencies' this week. The Australian Dollar has far more fundamental traction to carry it forward. The cumulative showing of current account, corporate profits and steady RBA helped to offset some of the disappointment in the 2Q GDP reading this past session. Pairs like AUDUSD helped amplify the technical amplitude with the Dollar's own weakness. For pairs like AUDNZD, a little more of the Australian currency's balance is reflected as both currencies are in a similar position. That said, follow through is not assured even through this run. 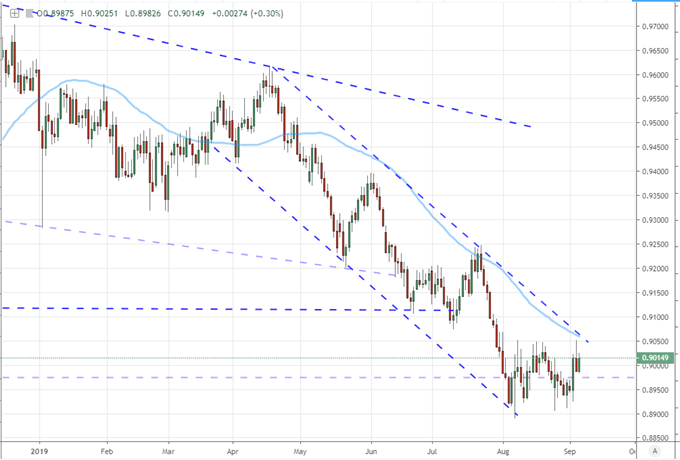 The Canadian Dollar is far more focused in its good will. The trade report this past session was a disappointment amid trade wars where struggle through economic diplomacy is a significant issue. That said, the Bank of Canada's decision to hold its benchmark at 1.75 percent and ward off conviction of further cuts in the foreground has put the Loonie in a fairly unique position among its many counterparts. An expectation for economic slowdown in the second half of 2019 raises some concern, but it is the lowest possible setting in a world where the reference to external risks is common place. Still, I would not draw any serious conviction of follow through from this currency.

Chart of USDCAD with 1-Day Rate of Change (Daily) 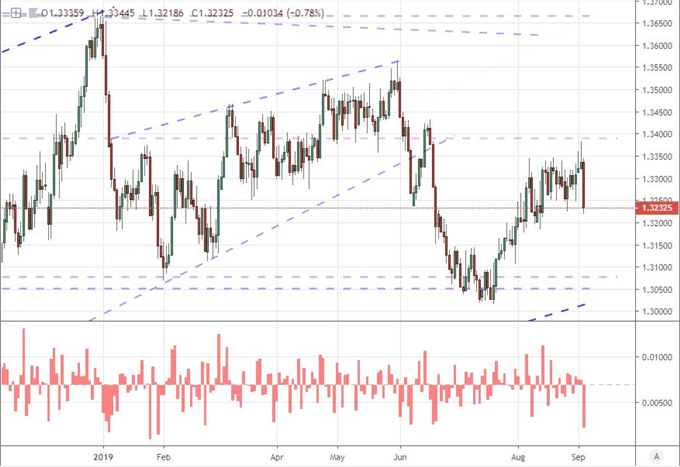