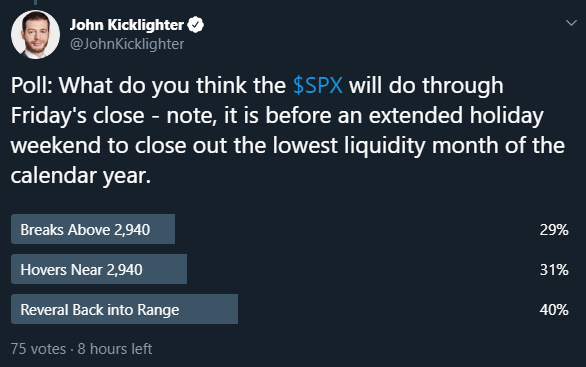 Will the S&P 500 Attempted a Break or EURUSD Multi-Year Lows Before Weekend?

There is a healthy backdrop for both technical highlights among key majors meeting a steady wave of fundamental influence, which taken together could reasonably lead traders to expect significant movement ahead. I do believe that there are circumstances that will prompt resolution in the form of potentially lucrative setups, but that doesn't imply such moves are immediately at hand. In fact, I see some of the critical breakouts from congestion or the drive to multi-month and multi-year highs/lows for some key assets is unlikely - and follow through virtually impossible in the event the initial catalyst is struck. That will be a problem for those purely operating through chart analysis.

Taking a look at my preferred benchmark for 'risk trends', the S&P 500 has swung back to the upper threshold of its August range through Thursday. The 2,840 resistance is difficult to miss and a frequented figure these past weeks, which means it will be levied with a significant degree of anticipation. A breakout here is indeed inevitable - particularly if it maintains the level of volatility it has generated up to this point. A 20-day comparison of the historical range the index has carved out relative to its realized volatility (the ATR or average true range), shows level of pressure that usually precedes a break. Though the range is wider over the period, the 60-day measure of that same activity-to-range comparison is even more historically extreme. 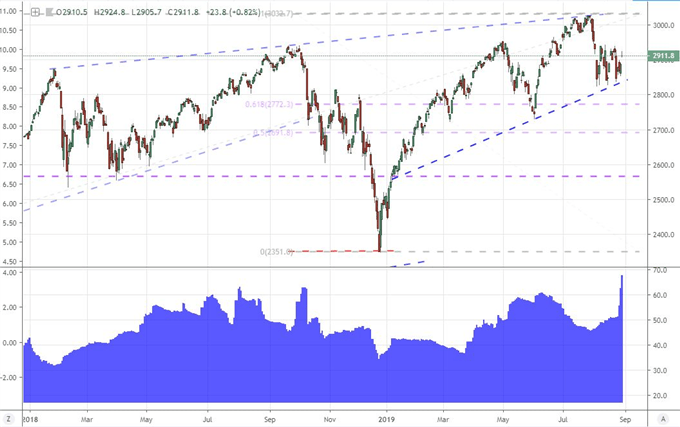 The Dollar is another benchmark that will draw more than its fair share of attention. The DXY Dollar Index has returned to a multi-year high that is principally a reflection of the EURUSD pushing 1.1100 to trade at its own two-year low (officially on a close basis). Where the equity milestone will draw out the speculators, FX traders will probably proceed with a greater sense of caution as the Greenback has proven the epitome of breakout with no follow through for nearly a year. Nonetheless, a little fundamental urging could nudge the currency higher and into the spotlight, an occurrence which could have knock-on effects. US President Donald Trump is clearly floored by the strength of the currency and is willing to fight the market. New highs will only increase the urgency of action - and FX intervention on part of the world's largest economy an have global implications. 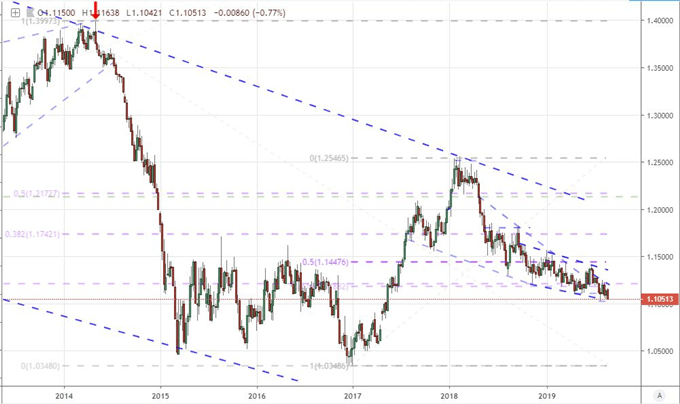 Fundamentals Themes Pressure Will Build Straight Into the Weekend

A further convergence with technicals to raise the anticipation of breaks and other significant market moves is the sustained pressure from high-level fundamental themes. This final thrust to the week, the least loaded charge would be around the fear of global recession - and that is saying something given its constant discussion in trading circles and in the headlines. This past session, Brazil's 2Q GDP warded off recession fears with a 0.4 percent quarter of growth while Canada and India are due to report their own figures Friday. The real interest on this front though is in market measures rather than data. The inverted US Treasury yield curves (10year2year and 10year3month) are relentless.

Chart of US 30-Year Treasury Yield and Dow (Monthly) 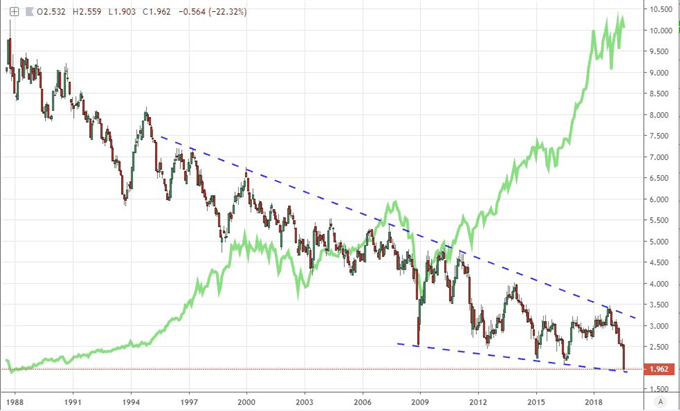 Monetary policy on the other hand is an open theme with deeper systemic implications but that could otherwise revert to data to find its momentum. I am particularly concerned about the ineffectiveness of extreme monetary policy as it becomes more obvious that it is failing to prompt healthy growth or even to artificially inflate financial markets. Speculators are more short-term in their concerns and that means they are looking for further infusions from the largest central banks. The two largest central banks (Fed and ECB) will come into data that will weigh on that probability heavily. The Fed's favorite inflation indicator - the PCE deflator - is due Friday and the market is still entertaining expectations vastly divergent from what the central bank itself is committing. On the opposite end of the spectrum, the European Central Bank (ECB) is facing the combo of its consumer inflation and employment report for the Eurozone. That is official mandate material. 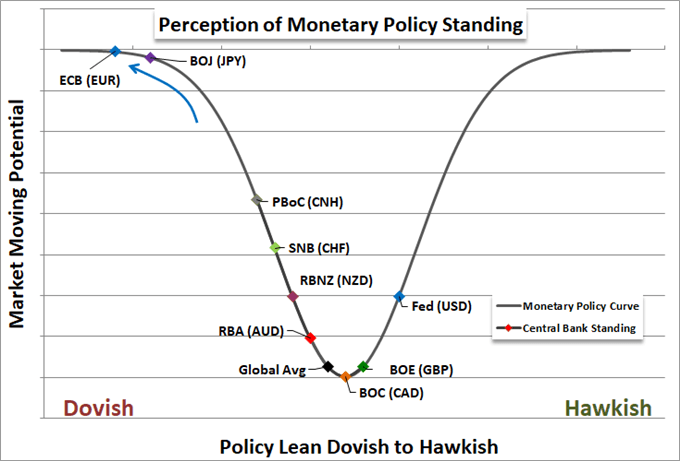 Trade wars is the third theme to keep the pressure up and it also stands as the least predictable. Thursday, a survey from the US-China Business Council reported 30 percent of those businesses that participated said they were slowing or stopping investments owing to the ongoing trade war between the two countries. Fully 80 percent said there business was effected negatively by the standoff. Yet, despite this sentiment survey adding to troubled economic data, the markets seemed to be riding high on trade conditions Thursday owing to some soft rhetoric from Trump about a possible higher level 'talk' between US and Chinese officials. There were reports from White House aides that suggest the meeting was not happening and recent promises of open communications were for the market's benefit. A sudden breakthrough is always a possibility, but the market is more readily positioned for yet another gap lower.

Liquidity is the Ultimate Determinant for Friday Trading Conditions

Technicals are clearly charged and there is an abundance of capable fundamental catalysts to spur the market into action, but the ability to turn a break into follow through or leverage a headline into significant movement is extremely limited from the general conditions that we face. We are heading into the final 24 hours of the trading week, which is always a countdown to liquidity drain. Those traders with a market perspective of more than a day and less than a week typically think twice before placing a trade that can be upended by an unexpected - but frankly probable, nowadays - development over the weekend. Add to that mix a holiday factor with Monday's Labor Day holiday, and the impetus to reduce risk is even more substantial.

What is perhaps most convincing for traders to delay positioning though is the seasonal expectations. We are rounding out the month of August which is on a trading day adjusted basis the most reserved calendar month for S&P 500 volume of the year. The index itself typically earns a modest advance through the same period while the VIX volatility index continues a climb that begins in earnest in August. September is when activity starts to hit a true stride however. The activity measure hits pace in September and slightly accelerates to its pick in October while the S&P 500 passes through the only month in which it has historically averages a loss. That is a lot for traders to look forward.

Chart of Seasonal Performance for S&P 500 and VIX 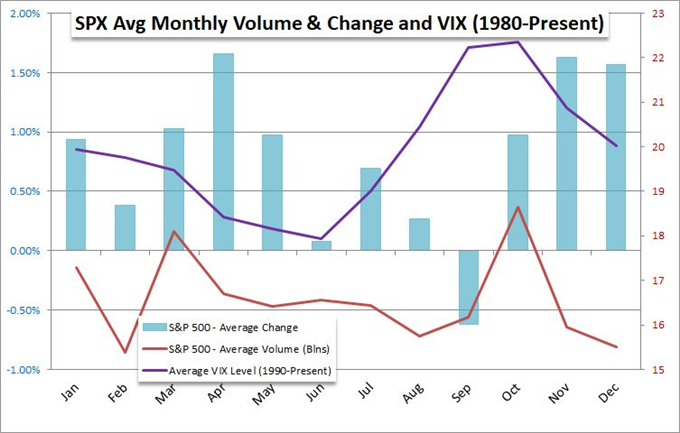 EURUSD and the 'Comm Bloc'

For candidates of short-term volatility, there is a lot to which the EURUSD may respond. This past session, the advanced trade balance was a figure of nuance but the deep gulf in interest rate expectations between the market and central bank raises the PCE's profile and its potential to jump start volatility. The Euro in the meantime will find its own monetary policy interests buoyed by a run of ECB officials this past session attempting to throttle market expectations. Knot suggested expectations for the September meeting were overdone, de Guindos made a point to say policy was data rather than market dependent and Nowotny said the group should be prepared to disappoint the market. Watch the EURUSD vigilantly.

The Sterling is individually interesting as well given the fixation on Brexit and the maneuvering between government and Parliament to position the no-deal scenario, but this is more solidly a game of wait-and-see until the MPs reconvene next week before the suspension goes into effect. The so-called 'commodity bloc' is less distracted. The Canadian Dollar saw the biggest inflow of foreign direct investment in four years this past session and is due 2Q GDP Friday. The Australian and New Zealand Dollars meanwhile forced new lows to the Greenback Thursday with a slump in private capital expenditures in the second quarter and drop in monthly business sentiment, respectively. Consider these currencies and their less-loaded pairings. 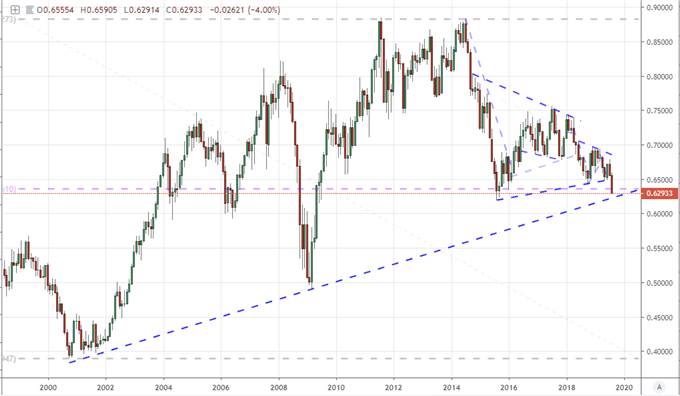