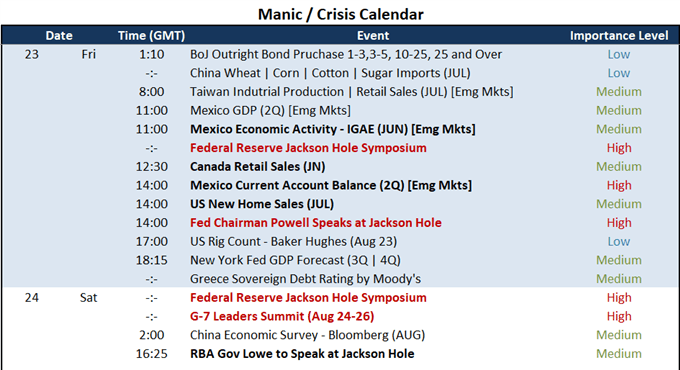 A Quiet That Doesn't Really Hide the Market's Fear

Few people would look to the benchmarks for risk trends - Dow, emerging markets, carry trade, etc - and take their relative restraint this past session at face value. At this point, even the purist technical traders would acknowledge that there is a buildup of anticipation that belies the restricted ranges on speculative global macro favorites. It is difficult to miss the overwhelming amount of event risk that we are currently wading through and not appreciate its systemic implications to economy and market. Yet, as we have witnessed multiple times over the past months, overlapping fundamental winds can act to throttle progress, particularly when there is anticipation for loaded event risk through the foreseeable future. We are only through the first day of the Jackson Hole Symposium and the G7 leaders’ summit doesn't begin until Saturday. Naturally, there is a considerable potential for change over the next few days - and there is a particularly high risk of volatility-inducing revelations when the markets are offline.

And, lest we forget, we are still dealing with the distortion inherent in holiday trading conditions. Despite the growing fears of trade wars and a global economic downturn, there is still clear evidence that volume and open interest in the most popular trading vehicles is fading. August is historically the most restricted month for volume for the S&P 500 per trading day, and recent turnover has lived up to that norm. Furthermore, we have seen a significant outflow of speculative funds from equity funds which suits the assumed rebalancing of the period while still churning concerns of an eroding backdrop. We may find next week's conditions more conducive to the seasonal coasting, but don't underestimate the potential for volatility through this week's final session and the impact of Monday's opening after a weekend of headlines. 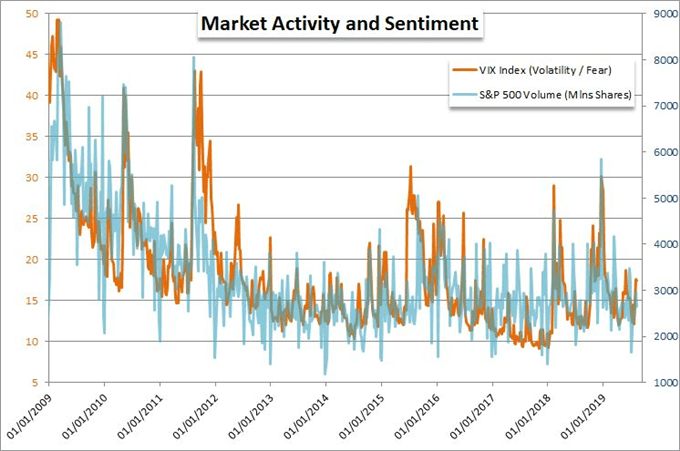 Monetary Policy from the Fed, ECB and a Global Perspective

One of the top ongoing themes for the global markets and the highlight of Thursday's fundamental run was the significant updates that we were tended through monetary policy. With the Symposium starting in Wyoming there was a host of Fed officials speaking in interviews. While there was certainly a degree of variability in the perspective of these different officials, the collective view of the world's largest central bank is very different than what the market is anticipating. Against a backdrop of anticipation for a further two to three 25 basis point rate cuts from the US central bank through year's end, there remains an enormous gulf to the group's own consensus forecast. At the July press conference following the first rate cut in over a decade, Fed Chairman Jerome Powell seemed to bungle his communication effort flip-flopping on the group's intent. His suggest that the move was a 'mid-cycle adjustment' was considered an error. Yet, as the FOMC minutes proved, it was intentional. The host of Fed officials this past session reinforced that temperate pace - whether the speaker leaned more hawkish or dovish. 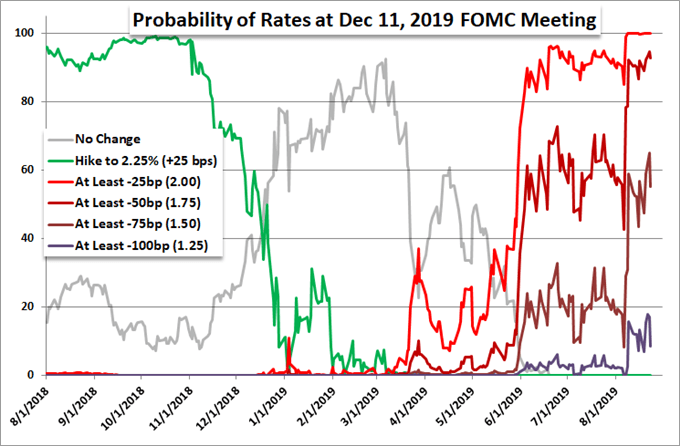 Day two of the Fed Symposium will see official speeches topped by Chairman Jerome Powell's opening speech at 9:00 AM Eastern. Given the confusion spurred by the central banker last month, the enormous disparity in market anticipation and the frequent targeted attacks mounted by President Trump, there is much expected from this statement. It is more likely to disappoint for the range of clarity the market is looking for, but it could readily trigger volatility. In the meantime, the Euro's significant updates went virtually unnoticed by the big-picture ranks. Yet, the region's consumer confidence dove deeper into negative territory (-7.0 versus -6.6), the ECB minutes seemed to reinforce expectations for a September stimulus (and possible rate cut) bump. If the group, as they were reportedly discussing, decides to pair rate cuts with asset purchases, it may very well earn the title of the most dovish major central bank. 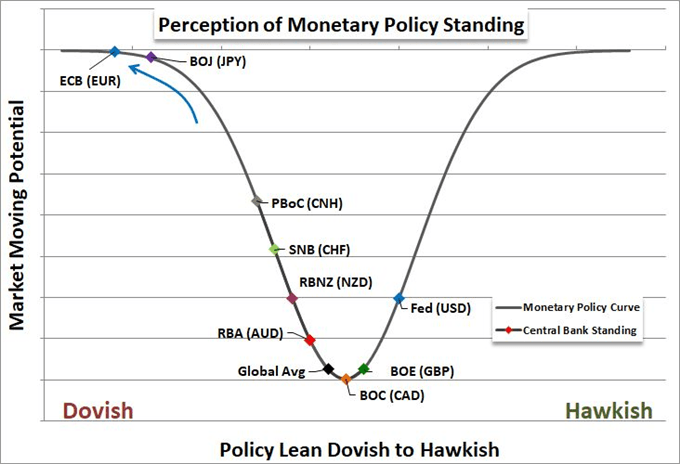 While there is a lot to speculate on relative to the Fed, ECB, BOE and other central banks' intentions, it is also important to keep a close eye on the general state of investor sentiment given the assumed dependency on continuous external support to offset very serious 'external' risks and simple cyclical restraint. There is a remarkable amount of implicit support placed upon the shoulders of the world's largest monetary policy setters. If their support is slow to come as a new downturn begins, the complications can be costly. If the market loses faith in their efforts all together, the mirage of stability could collapse - far more dangerous. 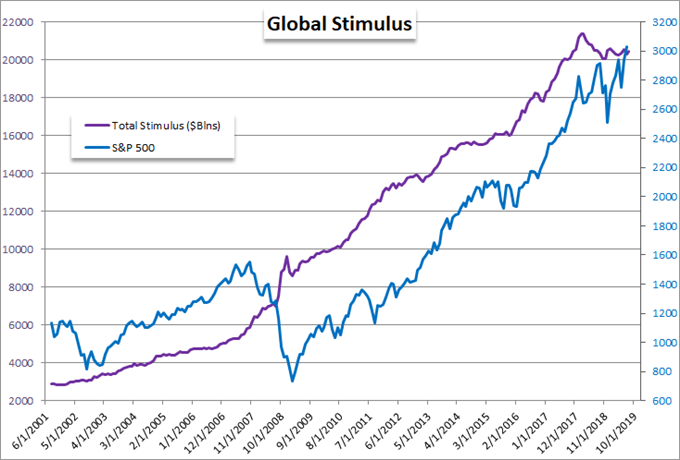 While monetary policy is a ready-made fundamental theme to keep track of through the end of this week, it isn't the only driver capable of utterly reversing the market's course and/or adding extreme volatility to intent - whether before or after the weekend liquidity drain. Another principal concern remains the health of economic activity. This past session, the August PMIs offered a close proxy for a timely GDP update. Given that role, the outcome of the data was more than disconcerting. Japan's manufacturing survey held in a contractionary 49.4, Australia's composite slipped into contractionary territory at 49.5 versus 52.1 and the US registered a 50.9 composite versus the 52.6 expected. The only bright spot seemed to be the Euro-area reading with a 51.8 print which bested the 51.2 reading, but its forecast element continued to suffer and Germany's (Europe's largest economy) manufacturing held deep into withdrawal at 43.6. All of this data aside, it seemed market participants were far more interested in the 2-year to 10-year Treasury yield curve inverting once again. 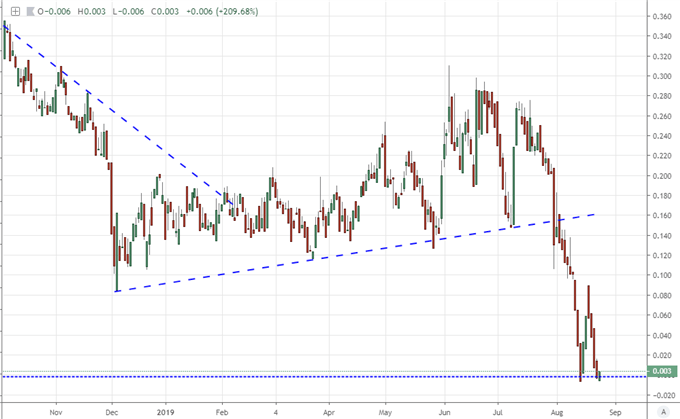 And, while it seems to have been shunted to the backdrop, traders would do well to remember that trade wars represent an ongoing fundamental conflict for global investors. There was reportedly favorable discussion between US and Chinese representatives this past session, but that is lip service to uncertainties that the market is no longer willing to take at face value. More unnerving are the reports that the EU is considering a plan to unilaterally pursue tariffs against the United States rather than wait for a retaliation. That is far from settled for the new EU President, but this is fight that we have circled for months. Meanwhile, expect this competitive policy that is plague to growth and threat to financial stability to feature prominently in the Symposium as well as the G7 summit over the weekend.

As we continue to evaluate the rotating influence of three overwhelming fundamental themes against the backdrop of troubled liquidity it is worth keeping an eye out for other ancillary developments in pockets of the market that can generate their own volatility or stand outside the pull of these otherwise dominant matters. The Brexit situation remains one of the most effective anchors against the systemic catalysts and even traditional risk on / risk off. This past session, the Sterling posted an impressive jolt higher which triggered a range of meaningful technical developments. In fact, an equally-weighted Pound index enjoyed its biggest single-day rally in five months, the second largest in two years. We discuss all of this and more in this Trading Video. 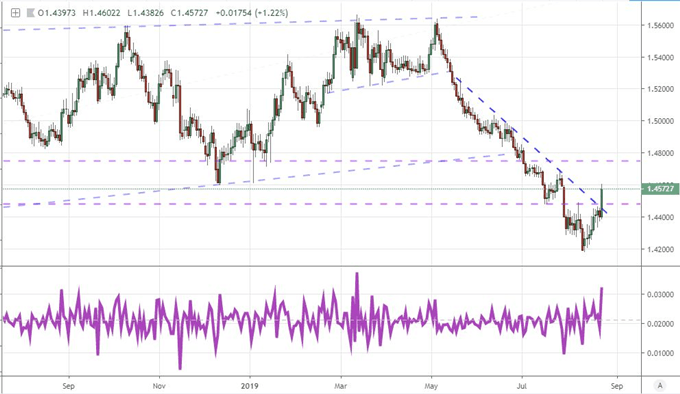