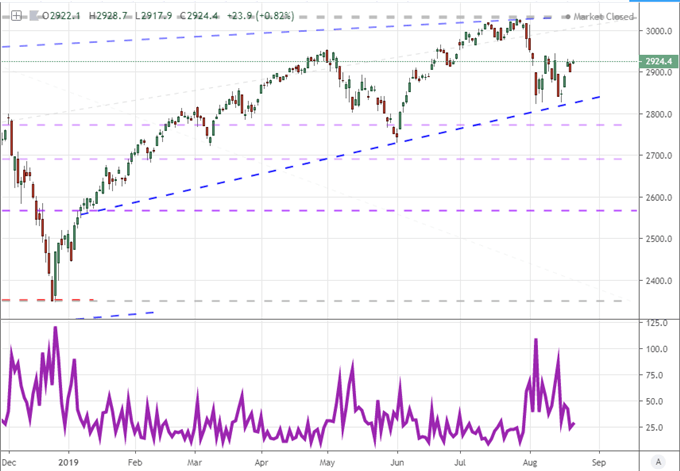 Anticipation Meets a Strong Fundamental Challenge for Control of Volatility

We have witnessed the full weight of speculative anticipation through the unrelenting restraint from the markets this past session. Despite a number of otherwise provocative updates on the three key themes we have been keeping close track of these past months - owing to the market movement they have inspired - we were met with extraordinary restricted trading ranges this past session. The S&P 500's 10.8 point range was particularly impressive given the strong gap higher to open the day and the fairly traversable range the index has to work from the past few weeks of trade. This is in part the seasonal liquidity drain that we have come to expect at this time of the year given historical norms. Yet, it is more likely that these conditions are more appropriately labeled the consequence of reticence to commit to a clear view in sentiment given the high-level event risk that is still ahead.

As we mull systemically important fundamental themes and their potential catalysts, it is worth noting the updates that passed unrequited this past session. On trade wars, the IMF took the quiet before the storm of the Symposium to warn that rate cuts from central banks and currency devaluation would not fix the economic problems that face those countries tempted to use the short-term salve. That warning continues to fall on deaf ears. Recession fears are still turning over after President Trump insinuated pressing China to change its trade policies was perhaps more important than the health of the local economy, but this past session reverted to a signal that earned a dramatic market response just a week ago. The 10-year to 2-year Treasury yield curve inverted intraday Wednesday, but that wasn't met by another 800 point drop from the Dow.

Top event risk proved the FOMC minutes. Expectations were low, but the July rate cut (the first in over a decade) and Chairman Powell's less-than-reassuring press conference ensured traders would be keeping close tabs. The US central bank didn't disappoint. One of the most controversial aspects of last month's policy update was Powell's seeming multiple switch backs in perspective during his statement. In particular, his suggestion that the cut - which conflicted with the group's own forecasts in the SEP - was potentially a 'mid-cycle adjustment' was critiqued heavily as a misstep. As it happens, this exact language was reiterated in the official statement. That fact hasn't broken the market's beliefs, but it has stirred some measure of fear that external safety nets are not fully in place to catch them should their risks not play out. 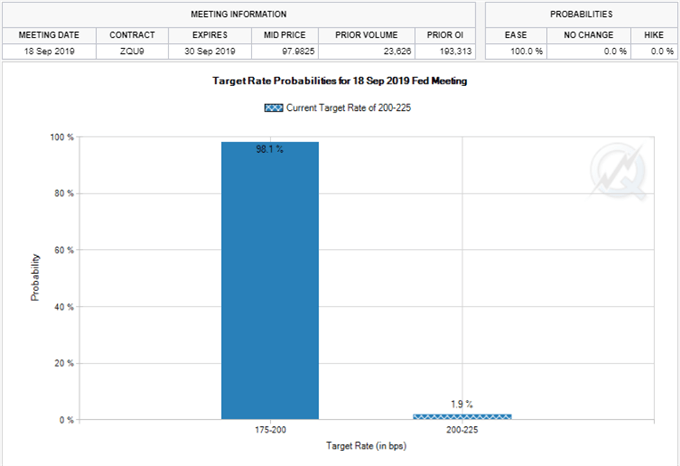 A Global Growth Update is On Tap Today

As we head into Thursday's trading session, the most data-centric theme to ready for is economic activity. There is a wide range of indicators scheduled for release over the coming session, but a particular theme arises through the broad release of a familiar range of indicators I consider a strong proxy to official GDP readings: the PMIs. In chronological order, we are due Australian, Japanese, Eurozone (alongside German and French) and US manufacturing, service and composite activity readings from Markit for the month of August. Given the targeted anxiety around a stalled economy for key 'majors' and the course of the world-at-large, this update will draw more than its normal attention. 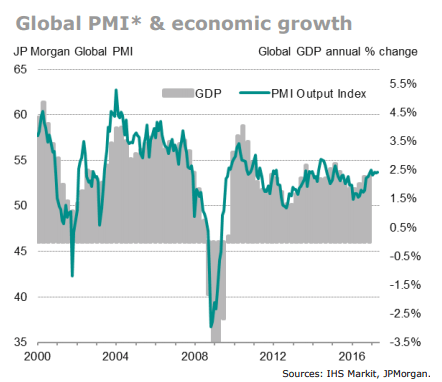 In terms of the impact this event risk poses, there is certainly a distinct skew with the potential. A run of data that shows a favorable upswing in economic activity would certainly be welcome by long-only investors and global officials, however, it will struggle to take over the market's yoke. We have seen the economic outlook dim for months with systemic threats arising in the highest profile themes - such as trade wars. Turning this engrained sentiment 'on a dime' is next to impossible, particularly with further event risk in the form of subsequent Fed Symposium and G-7 summit through the weekend. On the other hand, should the data conform to the flashing warnings of impending recession, it may very well override the distractions as investor fear builds around the oncoming collapse.

The Jackson Hole Symposium Begins With an Inordinate Number of Questions

Without doubt, the focus for anticipation will be drawn to the broad perspective risk imposed by the Jackson Hole Symposium. The multi-day gathering brings together business leaders, financiers, monetary and financial policy makers to discuss those issues most pressing to the global economy and markets. The topic of this year's meeting is challenges for monetary which is a catch all that inherently touches some of the most critical fundamental issues facing the market for short-term volatility and systemic concerns over stability. Of course, after the FOMC minutes, the market will be watching Fed Chairman Powell's remarks 'like a hawk' for any sign of tempo change. He has resisted the pressure to fold and offer all in a preemptive effort to sate troubled markets. The markets are still pricing in multiple cuts through year's end to contrast the official Fed forecast. 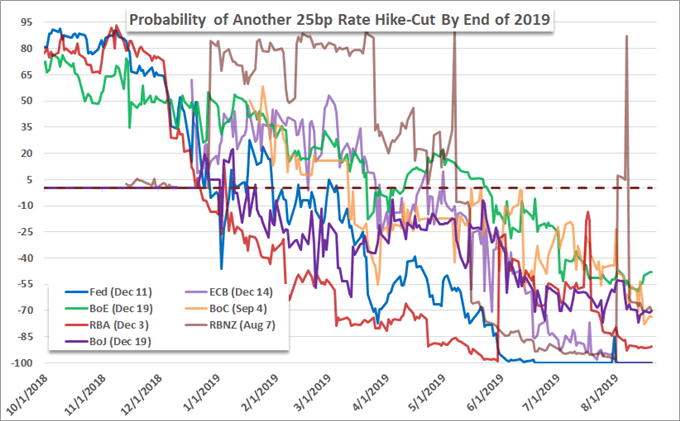 Beyond the pace of Fed easing, there is also the philisophical debate over what level of influence governments have over monetary policy. Like CEOs rewarded for creating short-term shareholder wealth, term-limited governments often focus on short-term growth for re-election purposes. The Trump administration is no different. Yet, as the President berates Powell in the Fed in public for not cutting rates rapidly, he ignores the implications for the group's long-term credibility - extremely important to fend off future crises where effective external support is crucial to pulling the world back from certain re-inforcing crisis. Will the Fed and other parties tender an official rebuke of the White House as a distinct risk to global stability? It is unlikely, but it is also curious that the official agenda hasn't been released even the day before the start of the event.

Restraint for the Dollar and Pound, Potential for the Yen Crosses and Gold

Looking for significant movement moving forward, there will be considerable throttling as the abundance of fundamental risks will work to keep the markets unsettled until a principal issue is settled upon. That leaves us with a curious case of considerable anticipation for volatility over the foreseeable future yet likely little outlet to have that situation run. If there is a group of assets that could be in a better position to channel a fundamental impact, I will be looking to risk-leaning assets. The USDJPY and other Yen crosses will be a particularly appealing outlet from my perspective. On the haven side of the spectrum, my standing interest remains on gold. Rather than just an old-hand safety, this commodity represents the alternative to what truly ails us today: the erosion of fundamental value and the crumbling backdrop of traditional assets' strengths. 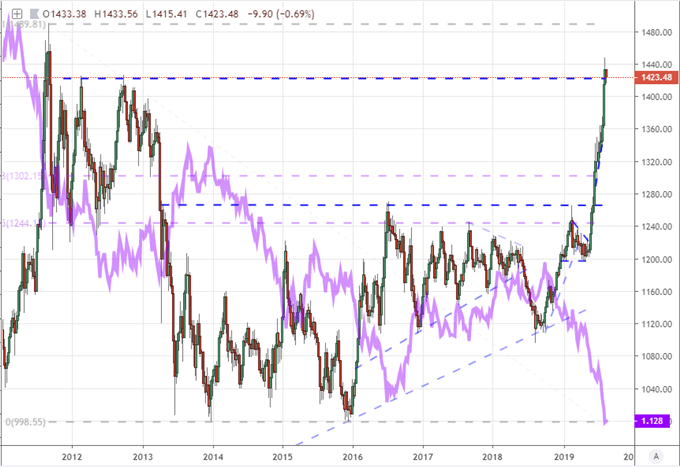 If the markets are better suited for (volatile) range conditions, it is perhaps better to seek out those assets that best suit that backdrop than to irrationally seek out the outlier that can prevail despite the prevailing conditions. Amongst the major currencies, the Dollar and Pound are two such candidates that are better positioned to hold course. The Greenback is on the same self-corrected rotation between recession fears, Trump administration adjustment and Fed policy response that we've been following for weeks and which has in turn kept range firmly intact. Alternatively, there is a lot of uncertainty ahead for the Pound, but dates for resolution are much further ahead. Chose your options wisely. We discuss all of this and more in today's Trading Video. 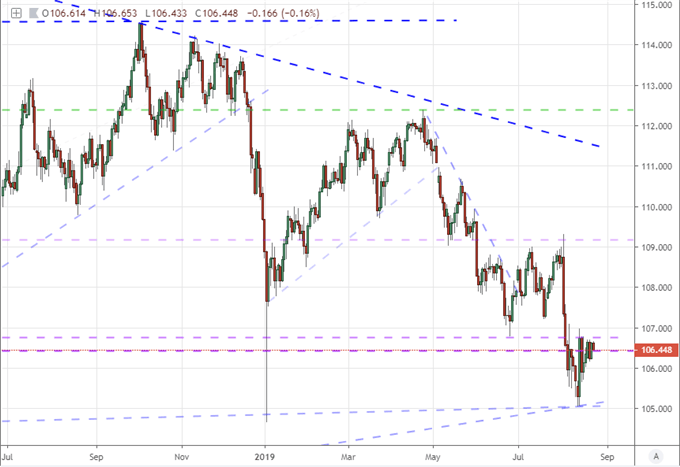