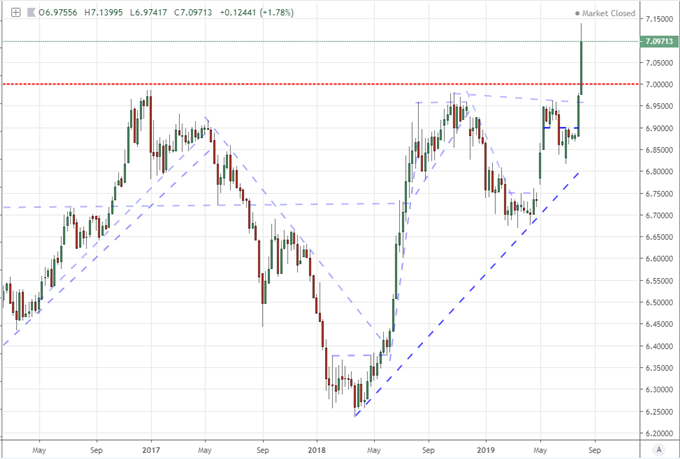 There is no serious debate to the observation that this past week's primary fundamental focus was the escalating US-China trade war. The period opened to China's allowance of USDCNH to rally through 7.0000 in response to the White House's decision to add another $300 billion in Chinese imports to the tariff list (at 10 percent) the previous Thursday. That has effectively changed the dynamics of this competitive approach to growth with taxes on the trade partners' goods no longer carrying the direct economic impact the US had hoped. Rather than offer some sense of relief that we are starting to reach some limits to these destructive policies, it only adds to concern as the players resort more readily to unorthodox policies with destructive side effects.

To ensure that we weren't too comfortable with allowing a troubling status quo simply resort to complacency into the weekend, President Trump was on the wires again Friday stirring concerns over the state of global trade relations with its respective influence on growth. His insight that the US 'holds all the cards' and 'we are winning' is readily written off by a market that is not so easily reassured. His remarks that they may cancel September talks, however, does carry troubling weight. It almost certainty displeased the President through the week's end that the IMF recommend China keep its exchange rate flexible if the trade wars continue to hurt its economy and Fitch's warning that the economic fight was hurting US farmers. What should be equally or more a concern for the leader of the world's largest economy was the IMF's lowering China's 2019 GDP forecast to 6.2 percent, the UK's first quarterly contraction since 2012 and the ECB's warning over its regional economic performance earlier in the week. The US cannot subsist amid a global slowdown - one that has been helped along substantially by US policies. 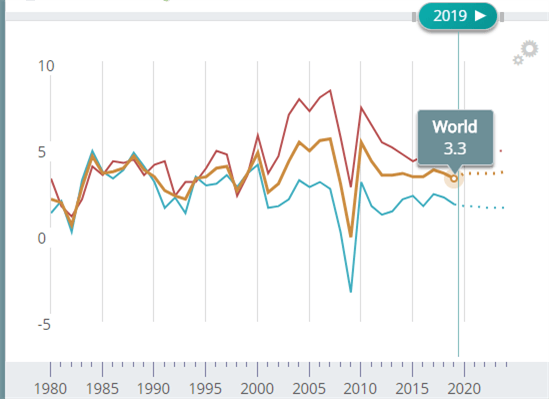 Is President Trump Attempting to Force the Fed Into Action Through Volatility?

Recently, Trump has dramatically increased the frequency of voicing pressure on China, the Fed and the Dollar. That may simply be the result of his taking a greater interest in these topics in general, but it may also denote a strategy. Following the turn in trade wars recently, that would seem to make sense as it is clear the means to maintain pressure on China seems to have been significantly truncated. He has made no effort to hide his belief that key trade partners - namely China and Europe - are manipulating their currencies (Yuan and Euro) for economic advantage. He would like few things more than to see the Greenback drop to offset these efforts so that the United States' economy can hold its advantage while policy aimed at punishing others transmits effectively. That hasn't happened however, because the US maintains some key advantages and the government is wedded to a 'strong Dollar' policy. 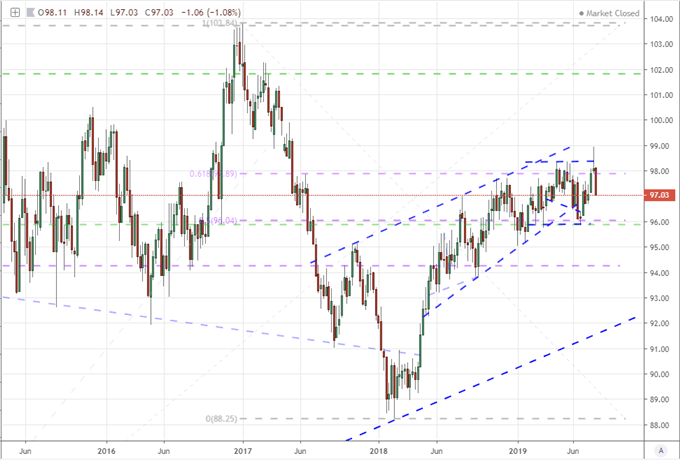 It isn't a leap to suggest that Trump is heaping pressure on the Federal Reserve in an bid to bully the central bank into a dovish policy bearing. With a yield differential of around 200 basis points relative to its largest counterparts (Europe, Japan, UK), there is a natural carry advantage with the US currency. If the market were truly motivated to seek out carry trade, that may be a genuine issue for leveraging the Dollar higher. However, there remains a significant under-performance of the yield seeking FX strategy over the past decade as the extremely tepid rate of return seems to have discouraged significant interest. Nonetheless, the White House seems to believe rates are the answer to their self-inflicted ills. Trump said Friday that he'd like to see another 100 basis points of easing from the US central bank (presumably through end of year) which echos trade adviser Navarro's estimate of four cuts in through 2019 (though there are only three meetings). The Fed doesn't seem inclined to acquiesce to these demands given inflation is close to target and employment as measured by the group is still close to its 'full' measure. If Chairman Powell and company will not capitulate owing to their dual mandate, then external risks would need to compensate. Perhaps if Trump generates enough financial market volatility, it will force them to act? The real question is how to get the Fed to fold without bringing down investor sentiment in the effort? Beware the bearings for the Dollar and general risk trends moving forward. 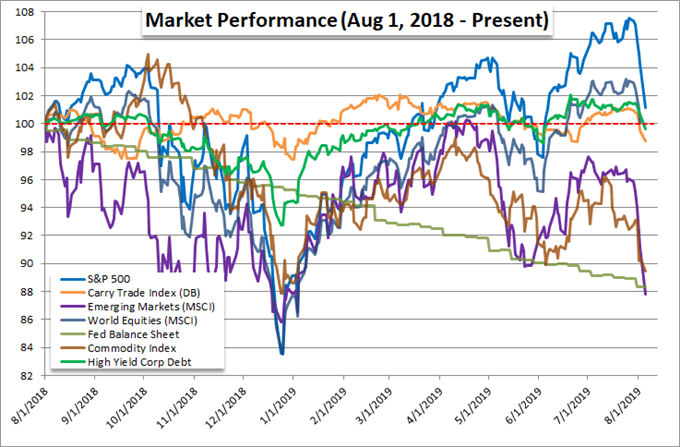 Fighting Against or Capitulating To the Summer Lull

As we weigh the influence of the more provocative and systemic themes, it is worth noticing the active effort to fight back a relentless dusk in liquidity. We are heading into the belly of the summer activity when the markets struggle to gain meaningful traction. Depending on your preferred measure, we are seeing levels of activity that rival the quiet of Summer 2014 - itself an ideal of quiet for modern speculative trends. August itself is a month known for particularly tepid liquidity as volume on benchmarks like the S&P 500 are at their lowest level (on a trading day adjusted basis) of any point within the calendar year. Over the next few weeks, the frequency of holidays by the majority is at its peak. Yet, be wary of allowing comfort to follow these norms. It is easy enough to see typical bouts of quiet turned on its head, and the backdrop for economic pain and financial stability is as disruptive as anything we have seen in recent history. 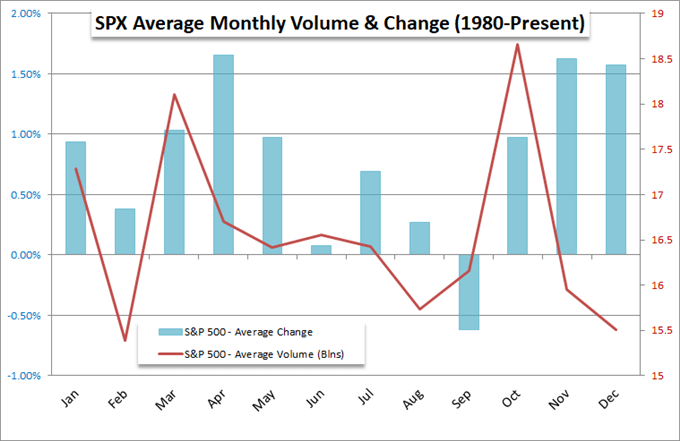 Thinned liquidity can certainly work to quiet the markets, but it can also readily amplify movement in speculative assets. Consider what happens when a fundamental shock reverberates in the market spurring a panic and wholesale risk aversion when there is not enough of a market to provide the necessary buying cushion to keep the benchmark from dropping more troubling lows. Despite the systemic issues at play nowadays, we still find volume and exposure dipping to more 'comfortable' levels. Rather than inspire confidence to build greater risk exposure, this should push traders to treat these markets with a little more caution. 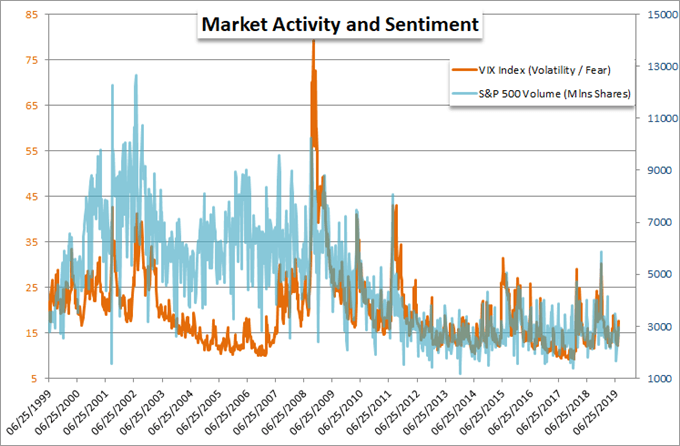 'Other' Fundamental Themes Including Brexit Fear, Italian Instability and the Carry Trade Crush

As we weigh trade wars against liquidity, it is important to recognize that these are not the only defining features of our trading landscape. There are not many other systemic influences that we need to account for when it comes to global 'risk' trends, but there is certainly asset and region-specific fundamental pressure traders would do well to account for heading into the the coming week. One of the most impressive - but surprisingly overlooked - fundamental issues on tap at present is the Brexit pressure. This past session, the UK economy posted its first quarterly contraction (-0.2 percent) since 2012 which bodes poorly against the relentless pressure of the Boris Johnson government for a no-deal outcome. There is little break in the PM's rhetoric and the Conservative Party is ramping up spending as if it expects a general election. No wonder the Sterling has dropped to multi-year lows and within easy reach of the three-day, flash crash low on GBPUSD this past week. 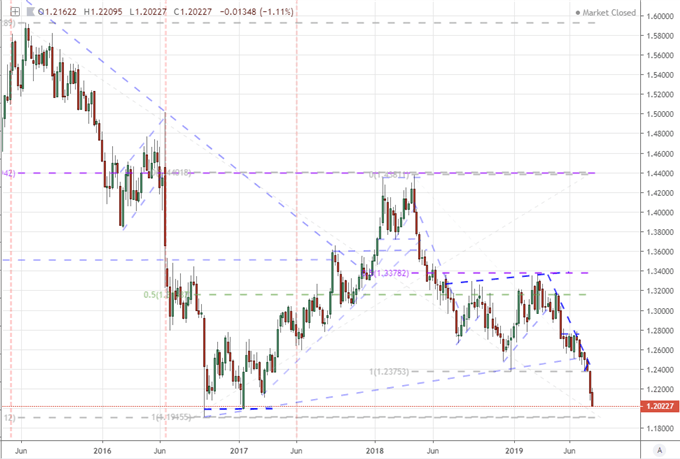 Where the Pound's problems are well documented by speculative forces these past months, the Italian troubles are coming back into their own only recently. Headlines to close the past week made clear that the tenuous coalition government in the region's third largest economy was falling apart. The country's president is due to talk to party leaders Monday and there is expectation that October will bring an Italian election. The 10-year Italian-to-German yield spread has shot higher which bodes poorly for a Euro that has otherwise taken advantage of a Dollar floundering under Trump or Pound burdened by a no-deal reality. 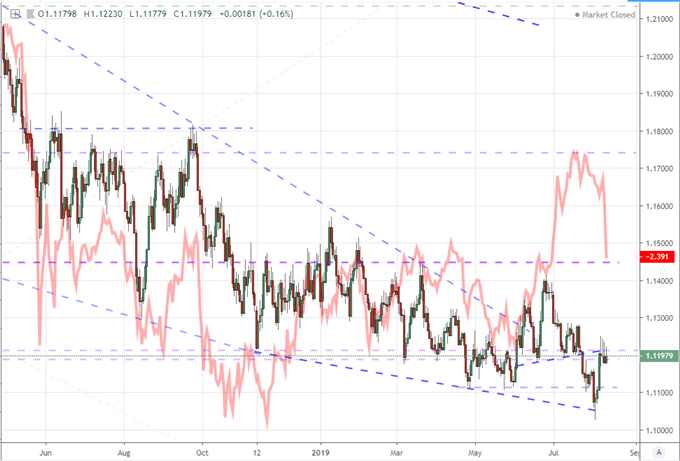 Another aspect of the FX market to watch in general is the slow crush in carry trade. This is taking play with reference to the preferred 'funding' measure in Yen crosses which are sinking in concert to more traditional risk trends. Yet, my interest is in what global impact we can expect from the caving of high-yielding 'carry currencies' lately. Yen pairs like USDJPY have put unmistakable pressure on key support levels - like the five-year wedge for that benchmark pair. Meanwhile, the standard bearers for 'carry currency' status are under serious threat. The Australian and New Zealand central banks are on a clear war path to easing market expectations by threatening rate cuts that could turn into unorthodox easing policy. We discuss all of this and more in this weekend Trading Video.