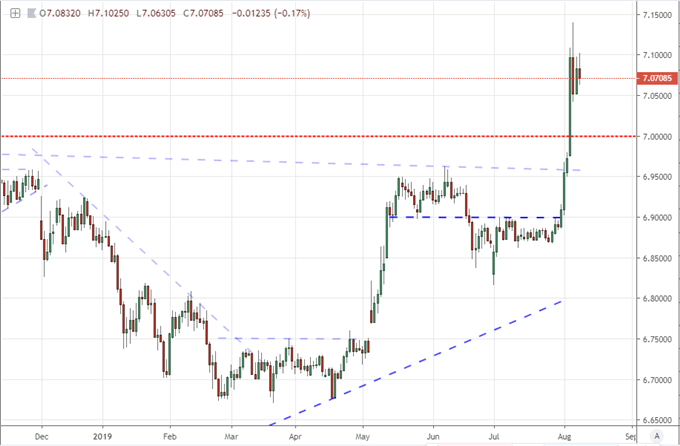 The US-China trade war is currently at a standstill. That is not to say that conditions have returned to a neutral cooling off period - much less improved - but rather we simply find ourselves in a break of escalation. That shouldn't put any global investors at ease, but bad habits of chasing short-term risks founded on little more than complacency are not exactly surprising. Summarizing this past week's plot: US President Donald Trump announced last Thursday that he would slap a 10 percent tariff on the remaining $300 billion Chinese imports that were until that point untouched. Monday mimicked a scene from August 2015 when global risk trends collapsed on a sudden depreciation of the Chinese Yuan with benchmarks like the S&P 500 tumbling as USDCNH cleared the 7.0000-mark. The US Treasury labeled China a currency manipulator - even though slide would be expected with economic pressure - and China announced it was suspending US agricultural products. This past session, the headlines were primarily jawboning, with each side suggesting the other was at fault and hurting the global economy for retaliating.

For a market that has grown used to quick bounce backs from fundamental hits and rewarded for chasing low-return risks, it is natural that this pause is whetting appetites. However, traders should not allow complacency to dictate their decision making. For the US-China standoff, it is likely that we see subsequent moves made by these contenders given that the exchange rate free of its cap can readily offset much of the cost to China from the trade war. If we were to hold this course, China could certainly hold out until after the Presidential election before negotiating in earnest - a stratetgy that President Trump has stated he expects. While this could hold some political potential for the US administration, it is unlikely to be a winning stand-alone platform on the campaign trail; so the White House is likely to apply additional pressure in order to further force China towards capitulation. The question though is what can they do to counteract a responsive Yuan? Long-term trade restrictions, sanctions and even the start of an earnest currency war should all be considered possible options for these already-reckless counterparts. In other words, the risks are far from settled.

When the Lessons of Complacency Meet Elevated Volatility Measures

Ultimately, few traders are likely complacent enough to believe that the global economy and financial system will simply be able to return to the norm of constant speculative build up through muddle along expansion. Yet, that won't dampen risk appetite. We have dealt with an underwhelming outlook for economic activity for some years and the threats of destabilizing risk measures has been a constant. To forever abstain from markets until the circumstances are ideal would mean never engaging markets at all. Nevertheless, the risks behind the scenes are elevated. We see it in the headlines with persistent stories on trade war fallout and central banks being forced to offer additional support. It is also tangible in the markets themselves. While the wide range of 'risk' assets haven't simply extended their dive, we find implied (expected) volatility readings remain significantly elevated. From the traditional VIX to measures for emerging markets, the Yen crosses and Treasuries; volatility measures deserve our respect as traders. 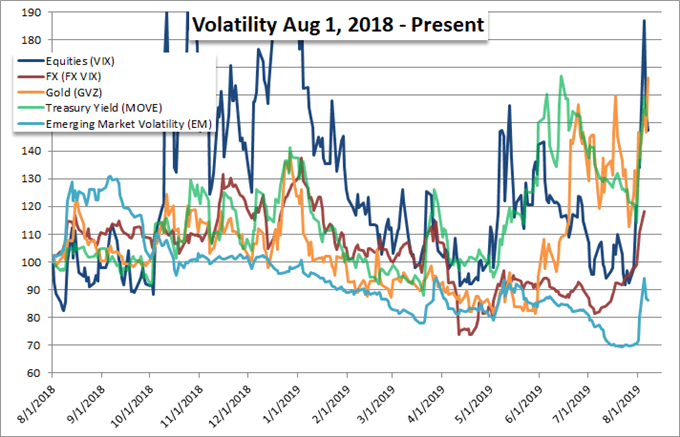 For those familiar with firefighting - or the 1991 movie - a backdraft is a scenario in which a seemingly benign fire is actually an oxygen-deprived superheated burn that turns into fireball when a source of O2 is suddenly introduced. That is the scenario we seem to face in global risk assets. Yet, with the consequences played down and appetite for another short-term swing unslaked, the market's rank instead starts to add perceived weight to otherwise tepid technical boundaries. We find just such a support with the S&P 500 and Dow in trendline support - the commonality between these two otherwise highly correlated indices likely adding substantially to the market's unearned enthusiasm. With Wednesday's sessions till fitting neatly within Monday's dramatic tumble, the S&P 500 is attempting to weight out the 2,825 area as an official third test of a trendline support for 2019. Three points is the bare minimum for establishing a trendline; but when opportunism runs high, even questionable measures look appetizing. Don't be so easily swayed. 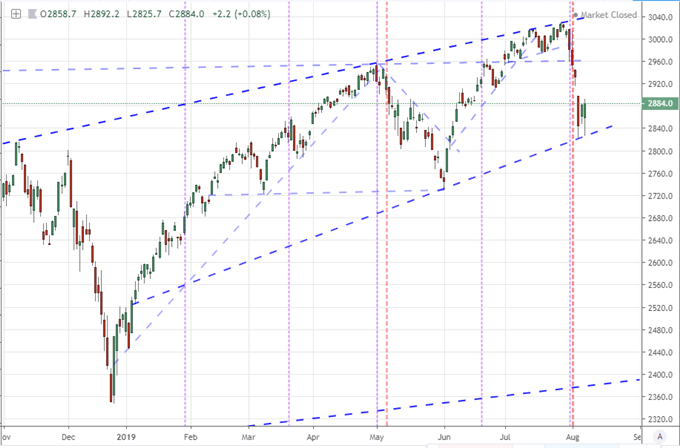 Recession Indicators Continue to Come Out of the Wood Work

As trade wars bite and investors start to seriously evaluate the over-indulgence of risk appetite, questions arise around the more systemic measures of valuation. Market measures of economic health continue to flash troubling signals. The US 10-year to 3-month yield spread is still skulking in negative territory with a -0.40 percent test this past session intraday for the steepest inversion in 12 years. Another wonky measure typically overlooked that was given greater deference from a market that is keen for affirmation was the New York Fed's recession probability model. The measure continues to rise and is near 35 percent as of this past week - and there are few times in the past 50 years that the measure has hit this level and not seen an economic contraction soon after. And, of course, there are the extrapolated commodity measures. Crude oil dropped nearly 5 percent this past session and copper continues to trade near two-year lows. 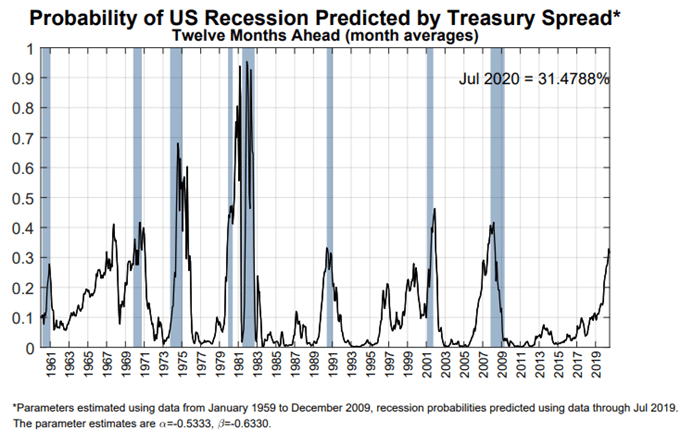 Looking ahead to the next 24 hours, there are a few traditional economic data points that will give us an update on economic performance. The Chinese trade report is a direct economic measure - and its release after the recording proved just as concerning as would be expected against the backdrop of trade wars. Japanese Eco Watchers survey is a sentiment measure of growth for July which is more timely than the official 2Q GDP reading we are expecting from the economy Friday morning. In Europe, the ECB's Economic Bulletin will offer insight to one of the more troubled regional economies - one that is also absorbing a lot of capital appeal of late owing to its detachment from trade wars.

Another side effect of trade wars and a troubled growth forecast is the necessary support it demands of the world's largest central banks as one of the few responsive refuges left. President Trump covering a wide range of topics in a media talk Wednesday reiterated his call on the Federal Reserve to offer bigger and faster cuts to the benchmark rate. The market is tangibly skeptical of the White House's influence over the US central bank, but it is more than aware that the group is beholden to the speculative tide. With volatility refusing to abate, the markets are actively debating the credibility of another three 25 basis points worth of cuts through year end. At what level this speculation finally sends the Dollar toppling remains to be seen. 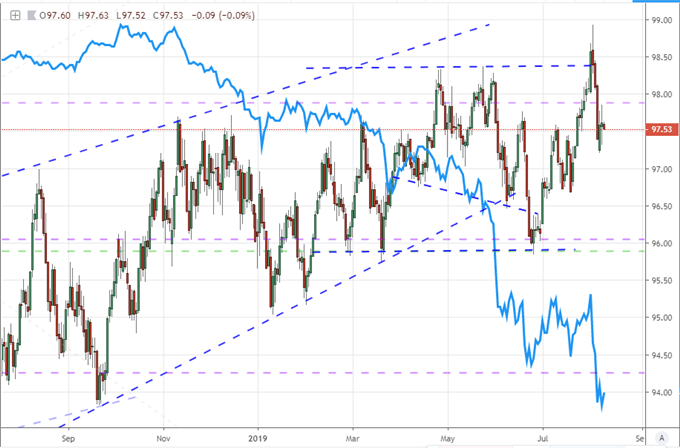 Outside of the 'will they or won't they' for the Fed, monetary policy is a growing theme across the globe as investors recognize there are few other 'natural' sources of expansion available. It should draw more than a little worry that the 10-year US Treasury yield carved out 8 consecutive daily losses through Tuesday to match the worst stretch since 2003 while testing a multi-year low that is dangerously close to a record trough. While US yields are low on the spectrum, they don't come close to the record low for German-based bunds which hit a record low -0.60 percent this past session. Anticipation of an active ECB adjustment in a further rate cut or new stimulus program is running high. The biggest headline on the monetary policy front this past session was the RBNZ's (New Zealand central bank) surprise 50 basis point cut. The Governor said further cuts were still possible and he even went on to suggest that negative rates would not be stricken from the list of future options. We discuss all of this and more in today's Trading Video. 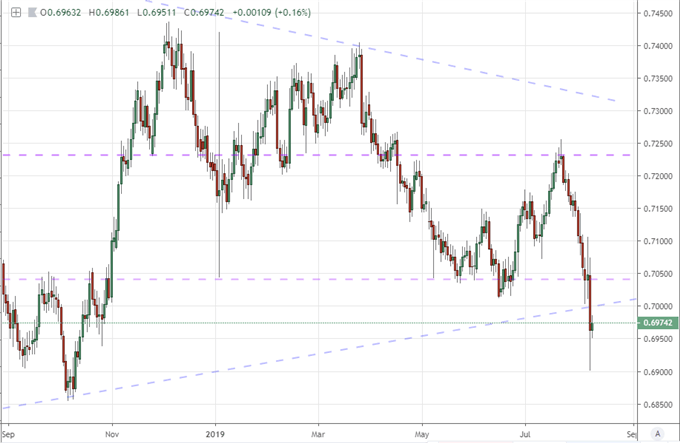