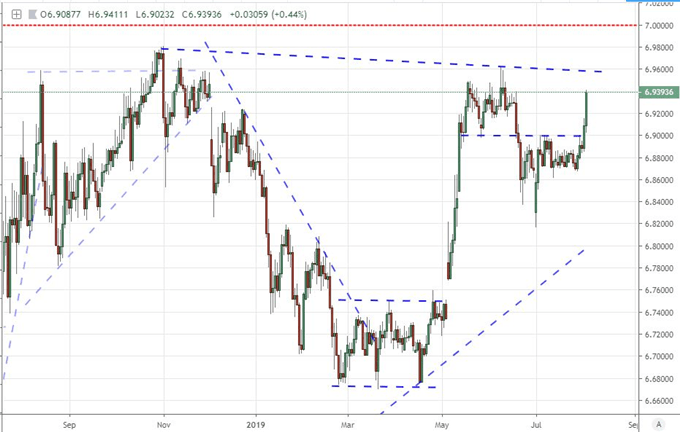 The market was still dealing with its hangover from the FOMC rate decision the previous day when US President Donald Trump decided to trigger another jolt of panic throughout the global financial system Thursday. Reportedly, after receiving an update from the lead US negotiators - Trade Representative Lighthizer and Treasury Secretary Mnuchin - on the lack of progress made with their Chinese counterparts before a month-long break, an angered Trump took to Twitter. The Leader of the Free World announced to the entire market that he was expanding the list of Chinese goods that would face tariffs by an additional $300 billion in goods. That is essentially all of China's exports to the United States. If there is any silver lining to this announcement, it would be that the President would only slap a 10 percent tax on the list rather than the 25 percent he threatened before the G-20 summit. That, however, offers very little comfort.

Trade wars have already taken a heavy toll on the global economy - including these two countries embroiled at the heart of the standoff. In fact, July manufacturing data was on the docket this past session and it was impossible to miss the weight that we have seen settle in on this particularly vulnerable segment across the board. The risk to growth from an already sputtering global engine is easy to envisage. My more immediate concern is financial fallout. This economic warfare has been a process of escalation, and this is clearly a severe leg. The inevitable next step is perhaps the more troubling one. China will retaliate and it is out of US imports to tax. Given the pressure, it will be prompted to respond and be forced to pursue more unorthodox channels. Will it use rare earth materials and create a unique strain in consumer goods and electronics? Will it allow the USDCNH to overtake 7.0000 and risk the uncertainty that comes with that previously unthinkable step? Will it consider the 'nuclear' option of selling Treasuries? In its eyes something needs to be done and its options are limited to far more provocative munitions. 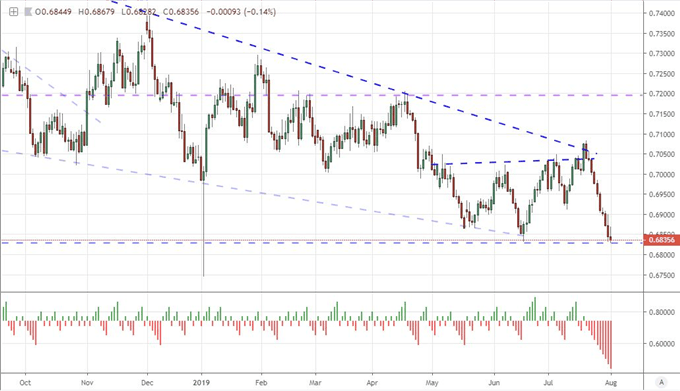 Risk Assets Versus the Dollar

As we sort out the tangible impact on economic activity and financial stability, it is important to keep a close track of risk trends. Clearly, the markets are tuned into the implications of this development. It didn't take long at all for the S&P 500 to abandon its post-FOMC rebound and drop over 2 percent on an intraday basis. That tumble would in turn send the benchmark below the immediate level of reliable support: 2,960. US equities are a poor representative of the general state of day-to-day risk given the extreme disparity between their performance and the standard growth-sensitive asset. On the other hand, that steady-state premium has taken on a roll of representing the upper threshold of speculative appetite. In other words, if this benchmark were collapsing under the weight of the market's fears, there is greater risk of a lasting systemic shift. 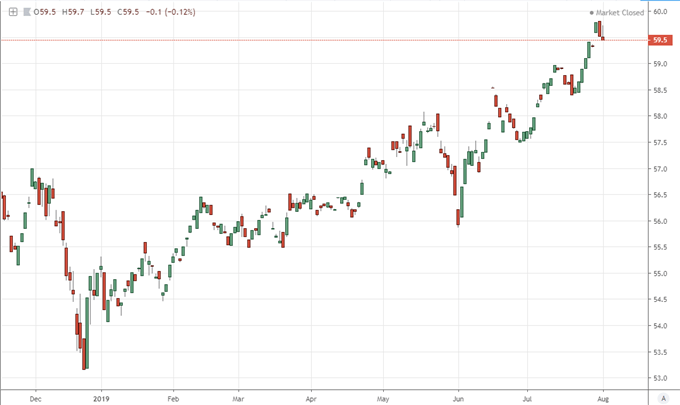 Looking to other corners of the speculative market, there is a better sense of the scope for fissure in conviction. Assets with a more direct route to the fallout for China - like emerging markets - are facing a cliff edge. At the same time, even those markets that have withstood capitulation to the mainstream ebb and flow of sentiment seem to have taken notice. The Yen crosses for example which have shown a remarkable amount of resilience against positive and negative swings in speculative appetite these past years saw a drop to multi-year lows Thursday. That wave included USDJPY. In the market's traditional checklist, the Dollar is a safe haven. Its liquidity and reserve status afford it a cult status. However, the originations of risk can draw out nuance in certain assets. Notably Thursday, both trade-weighted (DXY) and equally-weighted versions of the Greenback dropped. With the US at the center of the trade fight, it stands to lose significantly more in capital flight. That shift in role is well reflected through Yen cross. Where both the US and Japanese currency have a historical connection to risk aversion, modern circumstances have rendered the Dollar an overt carry status that shifts necessity to deleveraging excess exposure rather than facilitate a simple argument of which currency can absorb the greatest span of fear. 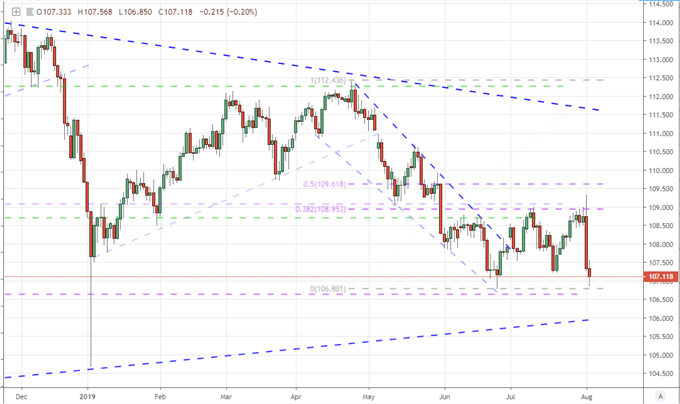 Over the past months, we have seen the market shift focus among seemingly independent though systemic speculative themes: trade wars; recession fears and monetary policy among them. What was surprisingly overlooked in this transition was the fact that these themes were indelibly related. That is certainly more perceptible now. Ironically, before Trump shook the markets Thursday, the IMF acting director David Lipton was on the newswires urging the US and China to end the trade war, calling the global economy 'fragile'. We will now see how brittle the backdrop truly is. It was indisputable that PMIs on the day were already showing a global strain, the Bank of England (BOE) forecast downgraded its growth outlook and the US 10-year-3-month yield spread dropped sharply into negative territory - the biggest notional slump in months. This onus of greater fallout between the world's largest economies will only exacerbate the situation. 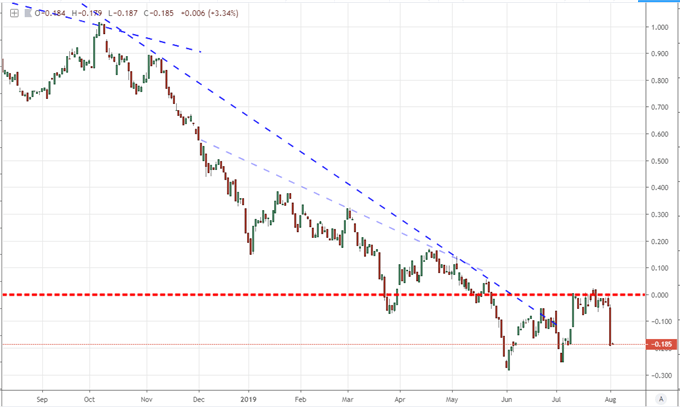 In turn, as sentiment places greater pressure on the the durability of expansion, there is in turn a louder outcry for relief from market participants and citizens. Governments seem utterly incapable to offer that support - indeed they seem more or less the source of the pain. That leads expectations back to a familiar source of stability through this past decade's charge: the central banks. Wednesday, Fed Chairman Jerome Powell struggled to justify the first cut since the end of the financial crisis in 2008 while simultaneously attempting to project a sense of confidence. Now, that easing looks essential - as does further waves that now seem inevitable to follow it. Where the probability of a September Fed cut held just below 50 percent after the Fed decision, it is now hovering around 84 percent according to Fed Fund futures while swaps put the chances above 90 percent. 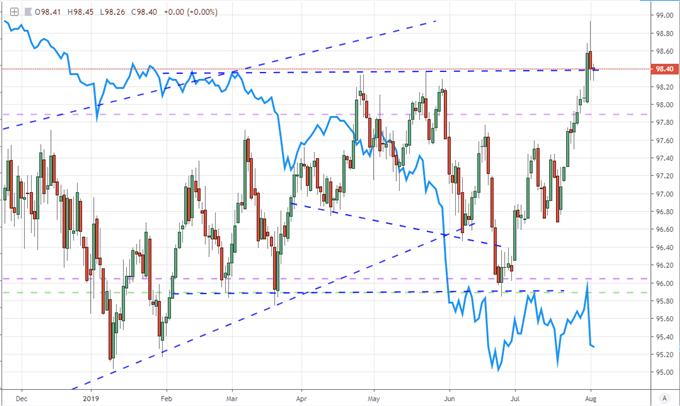 It seems Trump will get the deeper cuts he wanted. What we should genuinely make an effort to appreciate is what happens should the market see the trade wars as an unrelenting pressure that pushes the economic slowdown to a point of no return. If push comes to shove, the world's central banks do not have the capacity to fight a true retrenchment in activity much less a more kinetic financial fallout. It is the point where markets are tumbling and its participants realize the central banks can't save them that worries me most. 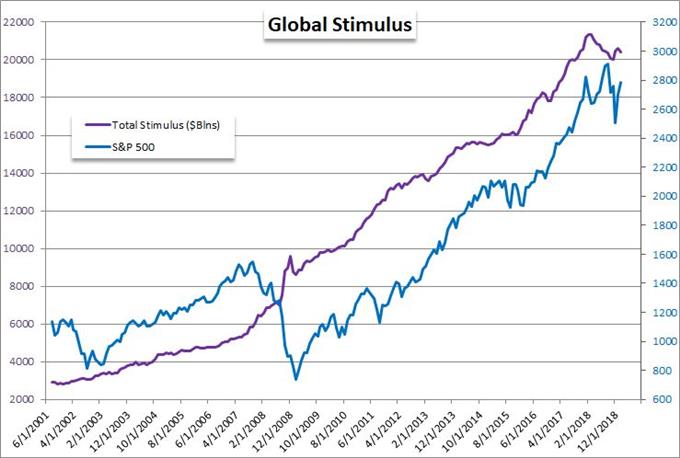 Sparing Some Attention and Fear for Brexit and NFPs

With this past sessions fireworks, we find ourselves trawling in deeper, systemic fundamental waters. However, that doesn't mean that we should simply tune out more discrete issues. The Dollar is embroiled between the pressure heaped upon the Fed as well as the implications of shrinking growth premium, but there is always market-moving capacity for the traditional monthly employment report. The July payrolls are due though Friday's session and they will certainly adopt a greater profile. With the Fed trying to reign in expectations of multiple cuts in 2019, this component of the dual mandate will be observed closely for its contribution to next steps. Further, the building fear over declining health in growth will re-establish its role as a traditional health indicator with very little capacity to improve but an incredible range for weakening.

Chart of US NFPs and Surprise of Actual to Expectaitons (Monthly) 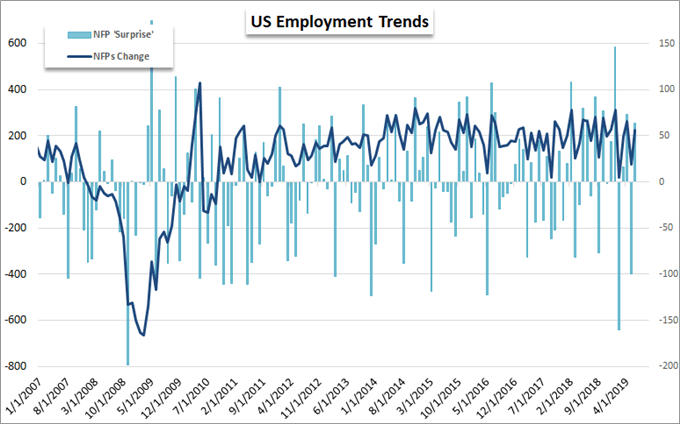 Further outside of the pull in US fundamentals, the Brexit situation can give shape to the alternative fronts to global trade and economic dispute. UK Prime Minister Boris Johnson made a tepid attempt to walk back the fear he drummed up in 'no deal' Brexit fallout, but his efforts were less than successful. Marking a reliable refrain, the Bank of England voiced its concern about the severe economic implications of a no-deal separation. With that fundamental probability heightened their outlook for growth reliably has declined further per their Quarterly Inflation report. With global conditions appearing to worsen, it is unlikely that the focus shifts and more probable that standing issues like this are only compounded.

Following the fireworks from the Fed and the added pressure from the trade war escalation, traders should keep closer watch on key events with risk and monetary policy implications. Today’s NFPs falls in the center of both themes. Join Analyst Justin McQueen as he covers the event live! Sign up on the Webinar Calendar.