Growth Was the Baseline Theme for the Week, But Tuesday Updates Were Unexpected

Between the United States' official 2Q GDP release due Friday and the monthly activity surveys on tap for the session ahead, the health of the global economy was always a likely key fundamental theme for the markets this week. However, I hadn't expected the market's interests in this undercurrent of systemic value to generate reaction just yet. Given the key events were further ahead, Tuesday would either find speculators waiting impatiently for the capable catalysts to cross the wires or perhaps find their motivation through alternative means in equally-important fundamental avenues with unscheduled developments. We were met with unscheduled but market-moving updates, just in the same arena as our prevailing focus. The IMF updated its global growth forecast this past session with an unmistakable cloud hanging over its sentiment. It had downgraded its 2019 and 2020 global forecasts by 0.1 percent points which was no doubt helped along by a 0.9 percent point drop in expected trade to 2.5 percent growth amid trade wars. Such a theme was clearly on the group's mind given that they suggested most of the pain was "self inflicted." 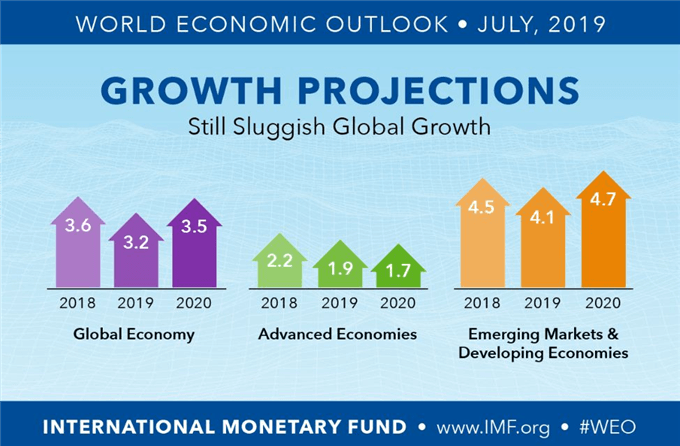 Where the economic outlook is troubled, the updates were not all bad news. An unexpected candidate for silver lining, the United States received an upgrade to its own economic outlook to the tune of 0.3 percentage points bringing the forecast to 1.6 percent this year. That is an interesting turn of events as much of the pressure via trade wars that so ravages global expectations has originated from the world's largest economy. Adding a little more traction to the growth implications for the US specifically, the news that the White House and Congressional leaders had agreed to lift on the US deficit ceiling for two years replaces seemingly constant risk of technical default and auto spending cuts with possibly more than $300 billion in spending - a significant boost in short-term growth.

If the world's largest economy is receiving an economic upgrade, it comes as little surprise that the US indices (S&P 500, Dow) would earn a jump higher on the day. Yet, it was the Dollar that would truly draw the value out of this news as the local fundamental boost drew greater contrast to the rest-of-world downgrade. Indeed, the Dollar rallied after the news sunk in. For EURUSD, a short-term break of support was pronounced, but its swing into its multi-month range does little to inspire confidence of a secured trend. AUDUSD's disarming its inverse head-and-shoulders pattern break however looks to be more certain. While this past session's jolt could prove the opening move of a lasting rally for the Greenback, that would depend heavily on the reinforcement from unrelated event risk due ahead. The July PMIs and 2Q GDP are growth updates with more weight while next week's FOMC decision is a more dominant influence altogether. 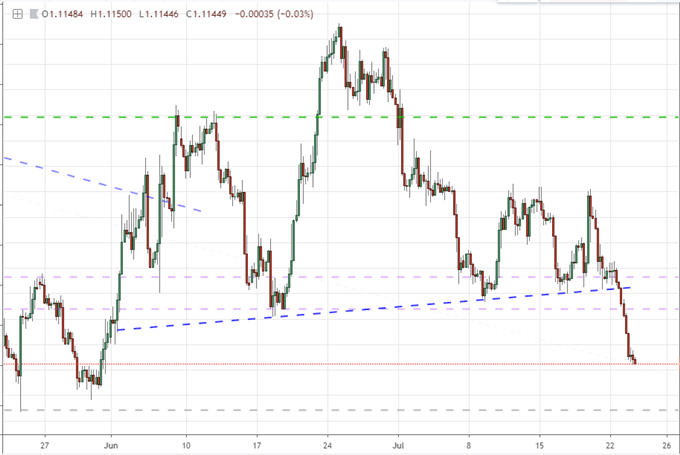 Extending the Fundamental Drum Beat Through July PMIs and US Earnings

As we head into Wednesday trade, the attention will remain on global economic health. The direct update on this theme will come via the current month's PMI readings. The activity overview through manufacturing, services and composite surveys is due for Japan, Australia, the Eurozone and United States. That is about as comprehensive as data can be on signaling the health across the globe. A favorable update could ease fears of impending recession, but it is hardly going to completely reverse the course we have found ourselves these past years of moderating activity. Further, the markets have not established any meaningful discount assigned to fear of tepid activity, so there isn't even a strong opportunity of reversing a short-term discount. Generally weak data would stand to carry the greatest impact given the IMF's update this past session and the general ambivalence in speculative excess in the risk spectrum.

Another outlet for growth expectations to follow is the session of earnings we are due ahead. The US business sector has not exactly championed the charge to record high across the US indices, but it hasn't tripped up the optimism. That can always change - and it would carry far more weight if such erosion occurred in a thematic way. On general insight for US growth, I will watch Caterpillar's update. The large machinery manufacturer is a blue chip closely associated with general economic health. Beyond that though we are also due insight on firms that are closely tied to trade wars. Boeing and Ford in particular are distinctly tied to the strained diplomatic and economic relationships with Europe. As for sheer speculative impact, the largest market-cap tech companies that compose the favorite FAANG grouping is due to report the numbers for is next member after the bell Wednesday: Facebook.

Chart of a FAANG Index Overlaid with Facebook (Daily) 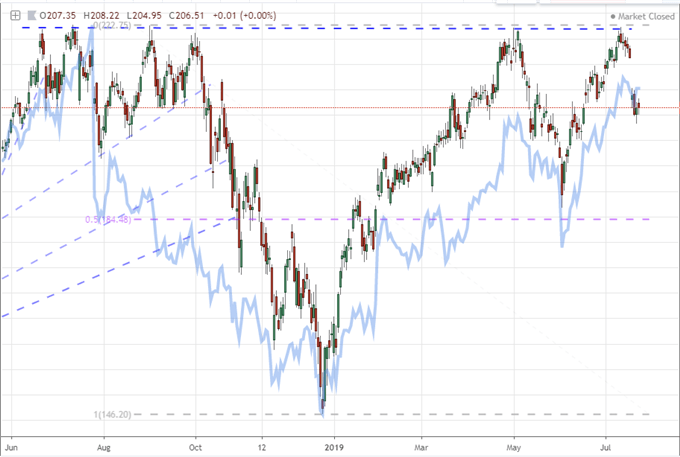 The most prominent scheduled event this past session would also deliver the most disappointing response from its respective currency. The Conservative Party announced its next leader would be bombastic Boris Johnson. This was ultimately the anticipated outcome with the market heavily leaning towards his besting Hunt. Meeting expectations is naturally the outcome that requires the least amount of adjustment from market participants as they naturally find themselves accurately positioned for the outcome. That said, Johnson's taking over as Prime Minister significantly increases the uncertainty for the UK and the Sterling moving forward. He campaigned on the vow to keep a 'no-deal' Brexit a contending scenario if the EU would not budge on further accommodation for the United Kingdom in the divorce. This week, the new EU President made clear that they could delay the deadline for a deal but they would not be changing the agreement hashed out with Theresa May. 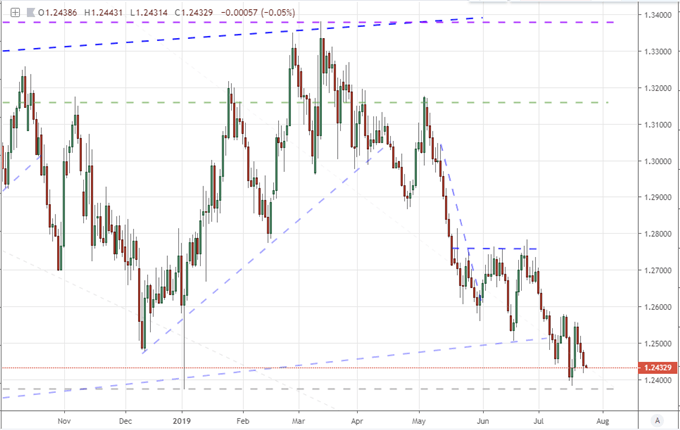 Moving forward, the markets may appreciate the uncertainty facing the UK economy and financial system, but they are certainly not pricing that risk appropriately. Merely facing such a significant uncertainty is taking its economic toll. This past session, business sentiment in the country measured by the CBI registered a sharp drop from the already negative -13 of June to a troubling -32 in the most recent month. From the market's perspective, there is a profound lack of preparation in the form of more severe financial fallout. That is clear in the FTSE 100's climb alongside its global counterparts this past session and the unreasonably low Pound implied volatility index from the CME. Beware markets that are seem aloof of obvious volatility threats.

Chart of EURGBP and the CME’s Pound Volatility Index (Daily) 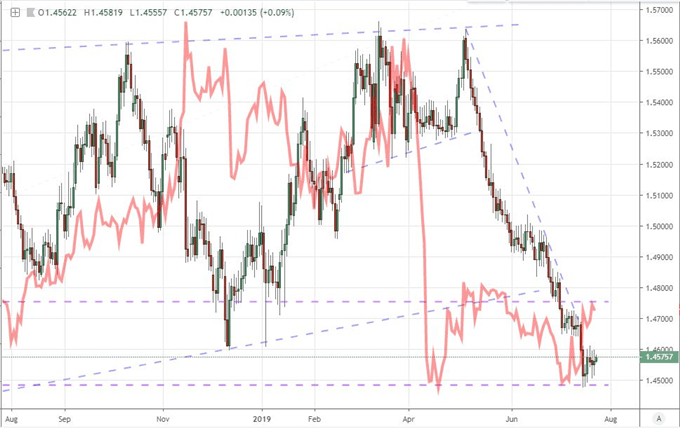 Another currency to keep a close eye on moving forward is the Euro. The upcoming session offers up the July PMIs for the Eurozone, Germany and France. Though valuable growth measures, my interest in this data run is primarily for its influence over sentiment heading into Thursday's European Central Bank (ECB) rate decision. The group isn't expected to change policy this go around, but there is heavy speculation that they intend to signal their intent to make a significant dovish change at a subsequent policy gathering. What form that takes is still unclear - as is the explicit time frame (though I doubt they will truly clarify that point). If the PMIs are particularly troubled, the implication would be an accelerated shift towards a dovish regime. There is significant potency in the rate decision, but marking stride before that event is improbable. Consider that when you make plans for any Euro pairs - like EURUSD.

If you are looking for a currency that isn't holding its breadth for the next scheduled event risk, the Swiss Franc is certainly a viable candidate. With the EURCHF dropping to fresh multi-year lows, the probability that the Swiss National Bank (SNB) has to take action only increases. When they act and how effective they will be remains to be seen, but the pressure is there without a scheduled pressure relief. If you want something not so severe in its anticipation, keep tabs on the Australian Dollar. As discussed last week, the inverse head-and-shoulders pattern from AUDUSD failed to transition from reversal and breakout to true trend. Instead, a host of Aussie crosses are holding up their AUD-resistance. I am partial to the likes of EURAUD, AUDJPY and GBPAUD. 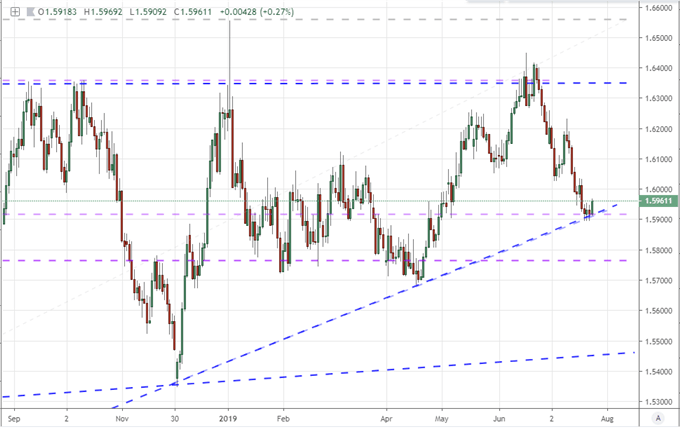