Anticipation Creates a Quiet Start to the Week

We opened to a remarkably quiet pace of market activity Monday. The Dow Index was essentially unchanged on the day while the S&P 500 established an 'inside day' to Friday's larger range. In the FX market, the world's most liquid pairing, EURUSD, traversed an incredibly restricted 19.4 pips through the entire trading day. That is the smallest scope for this benchmark pair since January 1, 2018 which is not an apples-to-apples comparison to normal market conditions given it is a holiday period with particularly severe restrictions on liquidity. Market depth is not currently a major restriction on trade, so it is sheer anticipation that is keeping the markets from 'normal' levels of activity. 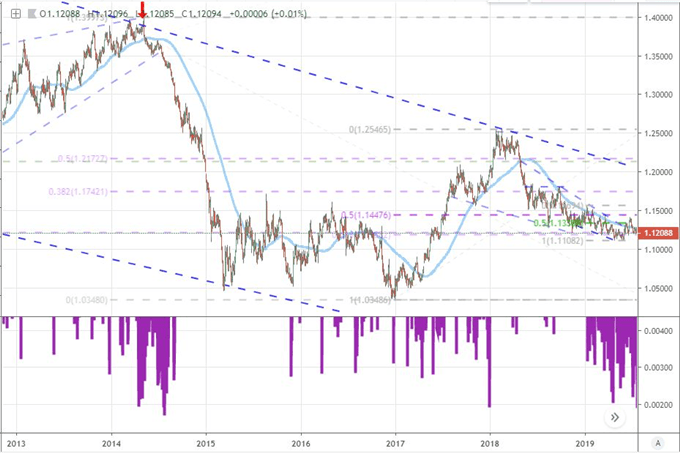 Given the high level event risk that is a little further out on the economic docket, it is no surprise that there is hesitation to set the speculative compass here and now. Monetary policy has its two largest central banks (Fed and ECB) due to update their bearings at their respective policy meetings on Thursday this week and Wednesday the week after. That alone is a profound reason not to commit to a bullish or bearish course on EURUSD. External support from the world's most reliable sources of stimulus is a global matter in speculative terms, but perhaps a little more tangible is the clear reading on global growth expected this week as well. Wednesday will bring the global PMIs (US, Eurozone, Japan, Australia) for July which is a strong proxy for official figures. Then of course, Friday holds the United States 2Q GDP update. Anticipation cannot hold back prevailing fundamental tides, but at the moment, there is no such relentless pressure.

While much of the interest in economic activity is anchored to events ahead of us, there was still noteworthy clues as to the health of global output this past session. In the United States, the Chicago Fed's National Activity Index for last month unexpectedly posted a contraction (-0.02) versus a 0.08 growth and following last month's -0.03. Further, in the 2020 Presidential campaign, we are seeing economic activity used as a front for debate. While the Trump Administration has regularly hailed the performance of the economy and benchmark equity indices, Democrat hopeful Elizabeth Warren wrote on a oncoming crash with mention of a yield curve inversion and trade wars with a clear reference to the lead in to the 2008 financial crisis. It seems everyone is talking about the Treasury yield nowadays. 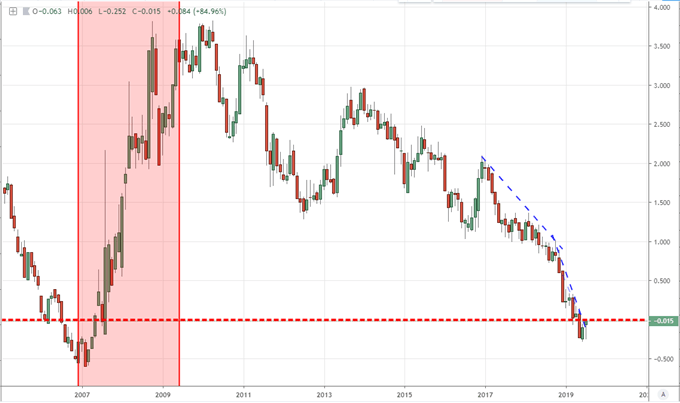 Meanwhile, the less-reliably paced trade wars nevertheless poses a frequent risk to stability. By volatility, there is just as readily an opportunity for improvement as deterioration. Reports Monday that US Trade Representative Lighthizer and Treasury Secretary Mnuchin are expected to fly to China next week for face-to-face discussions with trade counterparts raises hope that a breakthrough can be found with the proper persuasion. What enthusiasm that could bring in a neutral backdrop though is lost in a world that has been drawn into the hope of resolutions many times in the recent past only to see fulfillment never reached. Alternatively, we were reminded of the lingering risk from a spread of trade wars beyond the clearly defined US-China escalation. EU Director General of Trade Sabine Weyand was in Washington for the first time in her new role reassuring their commitment to work with the US on WTO rules while also warning they were ready to respond to any sudden moves towards unilateral trade barriers by the US - such as auto tariffs. 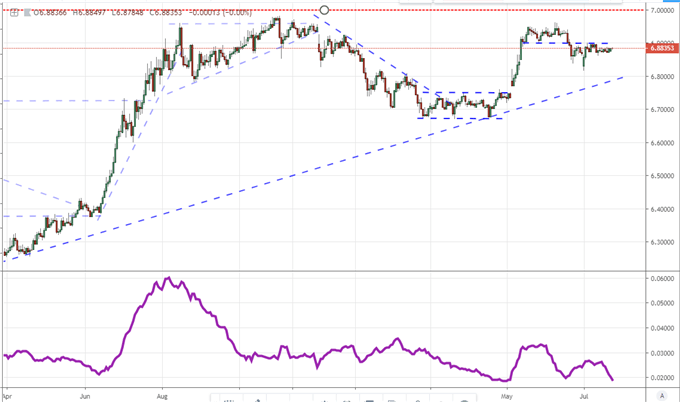 Monetary policy is another ready source of potential flare-ups moving forward. While there are very clear dates to track moving forward - particularly the ECB decision on Thursday and FOMC decision next week - speculation before the official meetings will be in overdrive. Eurozone consumer confidence and the PMI figures tomorrow will be evaluated from the perspective of what it can do to hasten or slow the ECB's pressure to return to government bond purchases. As for the US central bank, President Trump seems to be back on the blowhorn. He once again targeted the Fed, saying Powell and company should not "miss it again". On that same frequency, Trump's suggested next Fed nominee Judy Shelton was on the wires suggesting she would support a steeper rate cut (50 basis points) at the end of the month. That will definitely get on the White House's good side. That said, the official consensus is still projecting no change from Fed this year versus market expectations of a cut this month and two or three total in 2019. 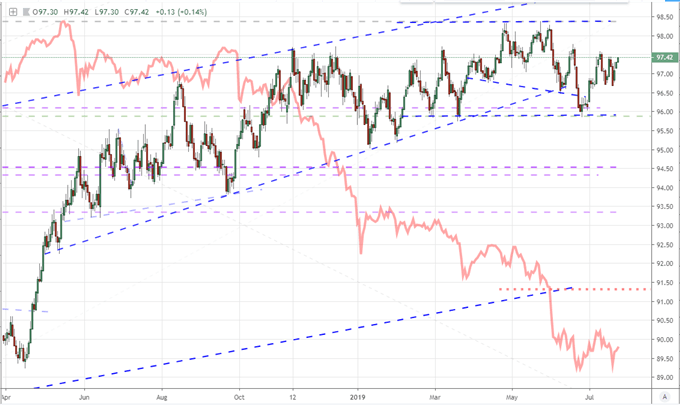 What Should We Expect from the Pound with a New PM Announced?

Top event risk for the upcoming session may very well be the Pound - a currency that has refused fundamental charge from alternative sources other than the frustratingly stodgy Brexit situation. This past session, the NIESR updated growth forecasts for the UK to 1.2 percent this year and 1.1 percent for the next - from 1.4 and 1.6 percent respectively. That would be the result of a forecasted 0.1 percent quarterly contraction this quarter, though the anticipation of a successive quarterly contraction (a technical recession) only stands at 25 percent. This strained outlook is in large part the reflection of the damage already wrought by the uncertainty around the Brexit. 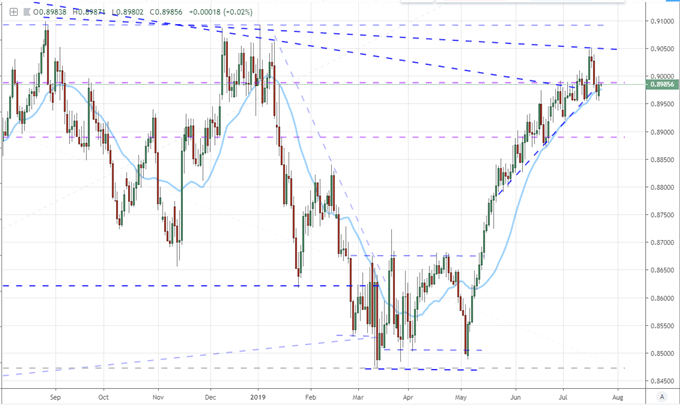 Yet there may finally be at least some measure of progress on the significantly delayed divorce of the UK from the EU in the upcoming session. We are reportedly due word on who the next leader of the Conservative Party will be Tuesday during London's session. Though it is not certain, Boris Johnson is still leading in the opinion polls for both head of party and country. Johnson has voiced a greater openness to using a disruptive no-deal option if the EU does not budge further on the previous withdrawal agreement agreed by May and Juncker. Already, we have heard there are threatened resignations among MPs including Chancellor of Exchequer Phillip Hammond. It remains to be seen whether the market has already fully discounted the risk of a disorderly breakup.

If you are looking outside of the set tracks of high prominence, fundamental influence; the list of interesting currencies can prove quite short. Ultimately, the separation of influence to the Fed, ECB, trade wars and prominent growth fears is a difficult fundamental well to escape. The Australian Dollar is not exactly fully free of the outside influences - the Aussie economy has distinctly connected itself to China's. However, there is greater separation between the Australian Dollar's performance and the likes of the Yuan. As it happens though, there are a range of Aussie-based crosses where the currency finds itself hitting meaningful resistance: EURAUD; AUDJPY; GBPAUD and AUDCAD. Keep tabs on those pairs. 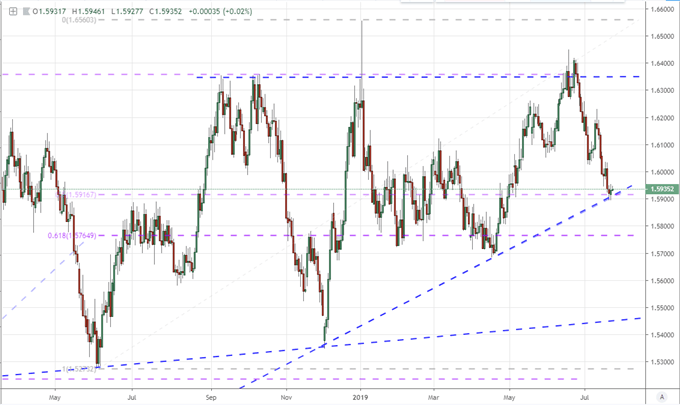 In a different vein, the Swiss Franc seems to be dealing with its own unique issues that could bring the currency to a breaking point...again. With EURCHF dropping to a fresh two-year low, we are reminded of the Swiss National Bank's (SNB) vow to keep its currency from appreciating too rapidly or significantly (Europe is its key trading partner). The pressure is on as Switzerland is attempting to arrest the influence of a far larger central bank than itself with tools already pushed back to the breaking point between negative rates and a failed exchange rate curb. What can they reasonably due from here if prompted remains to be seen. I will be watching the Franc's actions moving forward. We discuss all of his and more in today's Trading Video. 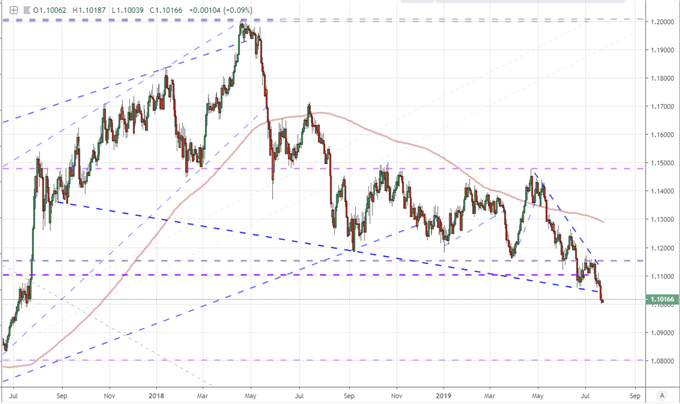