As we look ahead to the upcoming trading week, there is considerable fuel for a range of influential fundamental themes. If we were going by the calendar rather than accounting for headlines, it would look like growth and recession were the top theme for market-moving potential. However, recent developments will definitely change that speculative mix. This past week ended with a remarkable amount of volatility in Fed rate speculation - the largest central bank with the most traditional policy ammunition to enact serious change.

In the second half of the past week, market forecasts of Fed intent took a dramatic swing when New York Fed President John Williams issued comments that were interpreted by a hyper-vigilant market as indication that there may be support in the central bank's ran for a 50 basis point rate cut come July 31st. Where Fed Fund futures had projected a probability for such a hefty drop at only approximately 20 percent at the start of the week, the chances of a steep cut surged to approximately 70 percent Thursday. The response was so dramatic that a spokesperson looked to clarify that the permanent voter was not advocating for an accelerating easy path. To further throw cold water on dovish speculation, perma-dove James Bullard said he was only advocating for a single 25 bp cut and that this move would not usher in an 'easing cycle'. Move dovish of all though was Rosengren's suggestion that he didn't support a rate hike next this month. While the Fed's efforts carry the most weight as the largest player with the most policy room to maneuver, an eye should be kept on other policy efforts. China's PBOC said at the end of this past week that it would take more efforts to offset financial risks - an effort at putting out fires. Most remarkably moving forward though will be the European Central Bank rate decision. The group is not expected to make any material change - and is unlikely to until the leadership swap from Draghi to Lagarde takes place at the end of October - but forward guidance may be issued nonetheless. If a tip of more government bond purchases is offered, the market will respond in kind. And, while the undertow for the Euro may be strong, make sure to consider the systemic influence in the connection of monetary policy to market stability - particularly what happens if the market starts to worry that central banks have no further recourse to stabilize the financial system. 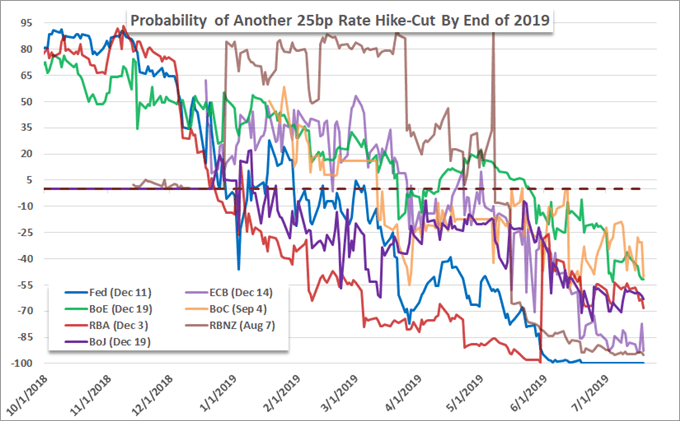 Another theme of heavy influence over the coming week - and which has a far more delineated release scheduled - is the outlook for economic growth. A global review of economic health is due on Wednesday when the July PMIs are due for release from Australia, Japan, Euro-area and US economies. This is as timely and comprehensive as the statistics come, and the potential is there for significant market response. A broad surprise signaling expansion or significant slowing of growth can translate into a systemic risk view. Short of that, we could also see a spark of momentum for individual currencies depending on what is printed.

A more targeted affair - and one that will act to curb volatility for much of the week - is the official US government 2Q GDP release. With a Friday release, the market will spend most of the week fretting over the eventual release. That can act to curb a speculative run in US capital markets or the Dollar until that data officially crosses the wires. As it stands, the Greenback does not seem too committed to a particular run for either the bulls or the bears. 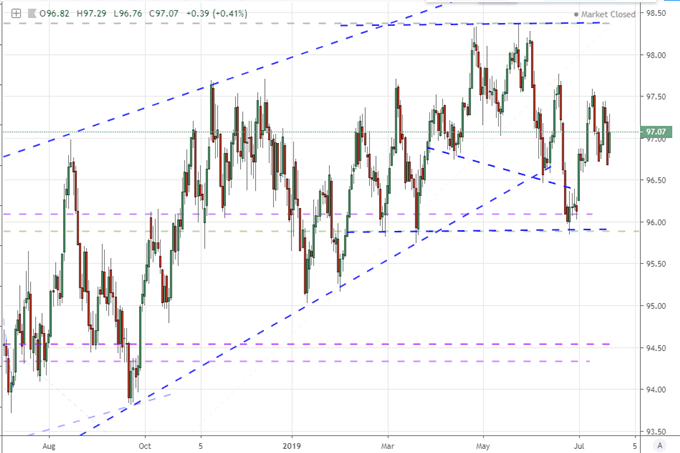 A different take on growth into this new week is the state of the business cycle. US earnings season will continue into the new week with a new balance of interest. While there are some notable figures from financial firms, insight into the Fed's influence on bank revenues is not the principal interest. A far more significant theme in the accounting data ahead can come through the sheer speculative balance to be found in key tech firms. Intel will carry stand out weight similar to Microsoft this past week. That said, I will pay greater attention to Facebook, Amazon and Google (the F, A and G in FAANG) as these tickers have contributed far more to speculative appetite these past year. Further, Caterpillar will give a traditional growth update only the blue-chips are capable of while trade wars will pick through reports such as those from Boeing and Harley Davidson.

Speaking of trade wars, we cannot write off the leveraged potential of the theme simply because there are not convenient milestones to watch for moving forward. The standoff between the US and China continues with Huawei reportedly a sticking point and accusations of currency manipulation a further tripping point. The greater concern I have is the spread of trade issues from the isolated US-China spat to encompass more developed world benchmarks. Europe in particular seems at risk with the Boeing-Airbus tension rising and France pursuing a 3 percent digital tax on large tech companies (most of which are US-based). If this theme flares up - particularly for the worst - it can readily hold speculative implications. 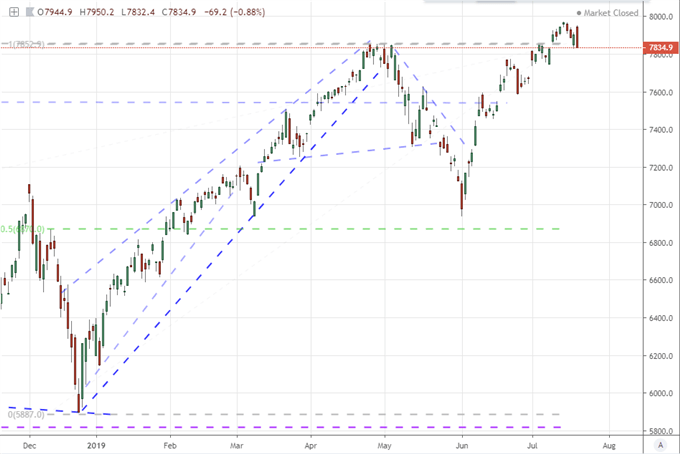 Another theme of low anticipation but extreme potential impact is the state of global geopolitics. The situation between the West and Iran has only intensified this past week. Following months of economic sanctions, we have seen the situation move into the UK seizing an Iran oil tanker followed by Iran shooting down a US drone. Late this past week, the situation devolved further when it was reported that the US shot down an Iranian drone and Iran had seized a second British operated ship. This is tit-for-tat retaliation thus far and the market seems to be slow to respond whether you follow risk trends or crude oil. However, this situation could easily escalate to something far more dangerous with little or no notice. It is best to be mindful of headlines. 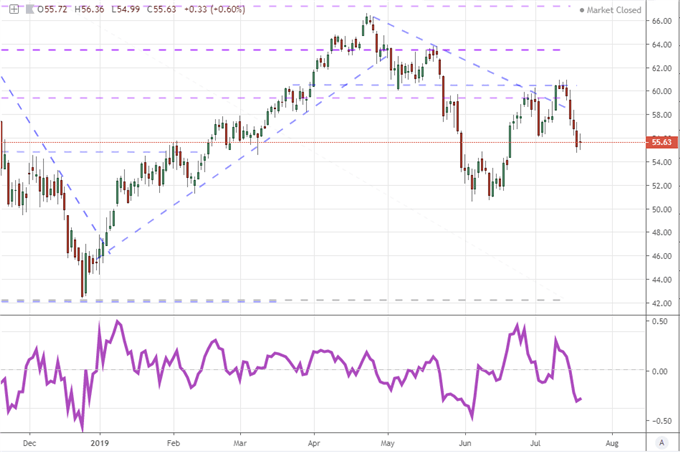 If you are looking at the key event risk and generate state of volatility for next week, there are a few benchmarks to watch for in particular. The Dollar is one such high-profile risk. With anticipation for the Fed's decision the following week and the US 2Q GDP on Friday, the Greenback will be heavily weight-and-see which should be interesting for EURUSD within range and AUDUSD attempting an H&S reversal. With the former pair, add the Euro's charge through PMIs and ECB and this should be a loaded week. 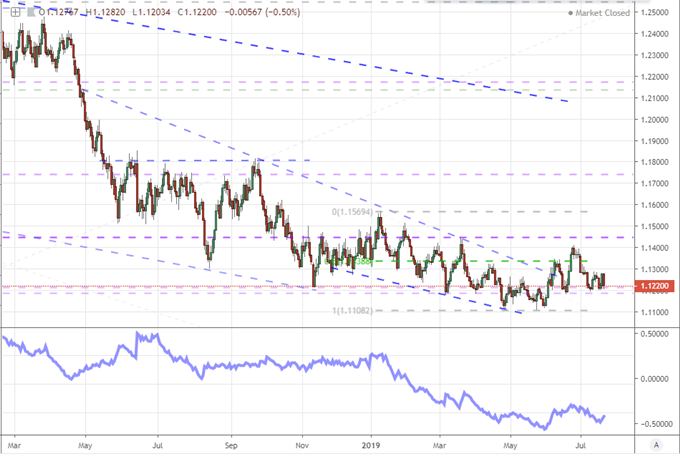 With political risks between Iran and the US/UK festering, the supply side of crude oil supply will post a near-constant threat to market volatility. The thing is: energy prices are far more sensitive to demand side factors than the supply issues that we are seeing flare up lately. If growth slows and risk slides, oil may drop even in the face of more direct restrictions in supply. In contrast to the clear growth reading in crude, gold will fix to financial stability specifically. The precious metal reflects expectations of financial stability more than inflation or even risk appetite. If talk of stimulus continues to build, gold will charge higher whether or not the efforts by central banks calms capital markets. 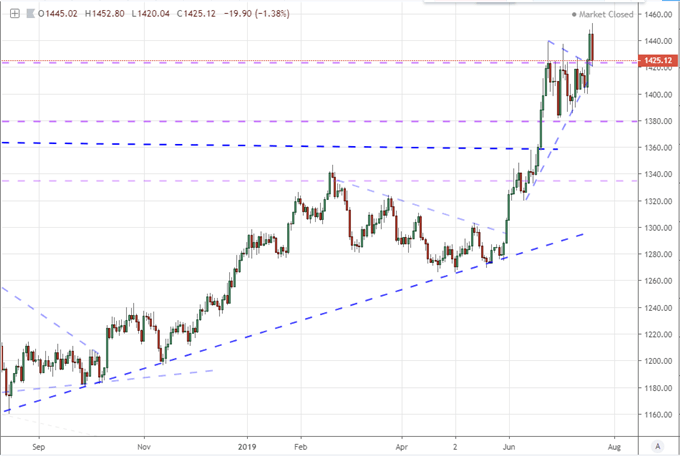 And, as always, the best risk asset to monitor ahead is a benchmark for US equities. This asset class is far from an ideal measure of each ebb and flow in sentiment, but it is the skew in the measure that makes it particularly interesting. With a clear preference for favorable developments in risk appetite, the Dow should be monitored closely for any notably slips in its climb. If the Dow, S&P 500 and Nasdaq were to drop back below their respective, previous resistance levels, I would be watching closely for systemic momentum for sentiment. 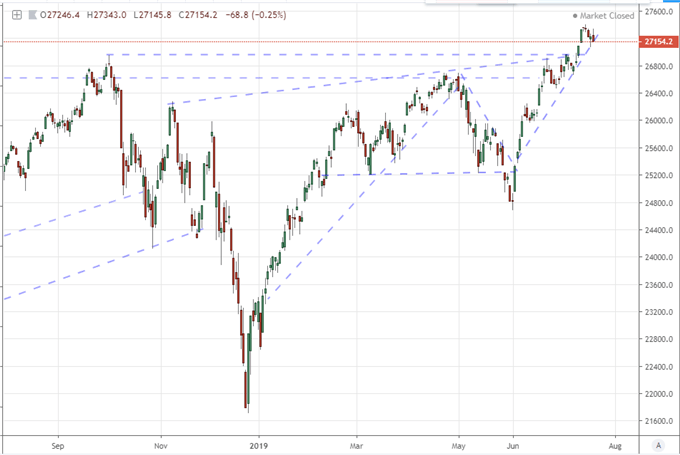