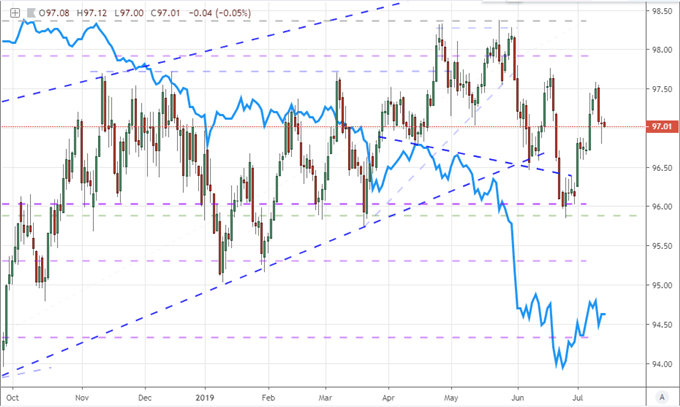 After the boost in enthusiasm from investors Wednesday on the first day of testimony by Federal Reserve Chairman Jerome Powell, the hurdle to extend a speculative run through day two of the grilling was significantly lowered. That said, it seemed the market didn't find enough material from his remarks to nudge the market to the modest next step. In general, the content of his insights offered little beyond what was already laid out the previous day. The US central bank seems to be confirming a shift in monetary policy course to eventual rate cuts, but Powell refuses to signal that he will move quickly to appease either President Trump or the speculative markets. If we are operating on rate expectations alone, the charged speculation of two-to-three 25 basis point cuts his year has been priced in since last month.

Further, there was a modest curb to a simple coasting for speculative appetite fueled by monetary policy dreams: the US consumer price index (CPI) for June. The market's favorite inflation indicator saw its headline reading fall in line with expectations below target, but the core figure unexpectedly recorded a 0.3 percent jump on the month. That is the biggest jump in a year-and-a-half and the second biggest since the current growth cycle began. Does this undermine the Fed's plans to cut rates in the second half of this year? No. However, between this provocative inflation reading and the robust employment report last week, the argument for an aggressive three hikes is not nearly as convincing. The Dollar seems to have responded to the news with a strong intraday reversal that left a large ICE Dollar Index tail, but this is not the outlook I would expect to readily carry forward a counter-trend monetary policy view.

Another interesting observation with the lost traction in transitory speculative leverage - monetary policy encouraging risk taking - was the performance of US indices. Normally, I highlight the long-term performance divergence between US equities, global equities, emerging market assets, high yield fixed income, carry trade and other benchmarks for risk taking as an indication of uneven or unconvincing conviction. Yet, what happens when this disparity arises within the specific regional asset class? The Dow managed to rally above 27,000 this past session to a new record high, but the typically better performing S&P 500 and Nasdaq failed to extend their own climb. This is hardly polar performance, but the disparity in small cap (Russell 2000) versus the Dow speaks to that systemic issue. 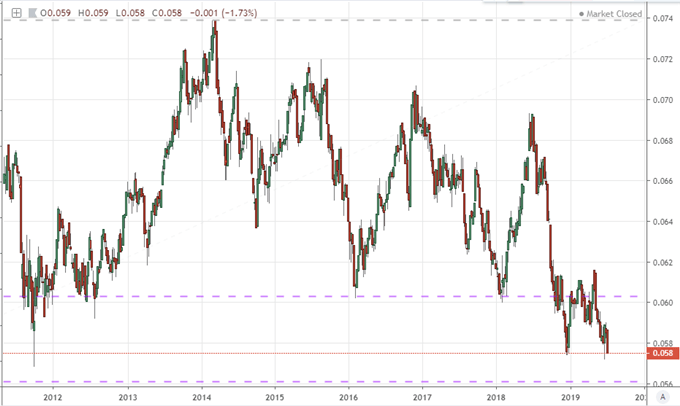 While the attention was squarely on US monetary policy, the Fed wasn't the only major group offering updates this past session. The Bank of England (BOE) issued its regular financial stability report. It comes as no surprise that the group would once again warn about the risks associated with a 'no deal' Brexit. Governor Carney warned that while the UK's financial system would survive the shock, it would result in severe repercussions and the economic impact would be 'virtually instantaneous'. Even if the worst case scenario weren't realized, the economic tab continues to grow as the country's relationship with the EU remains unclear. That is perhaps an unnecessary reminder that trading the Pound means a bearish bias that will be throttled for momentum while reversals will likely die out well before momentum takes. 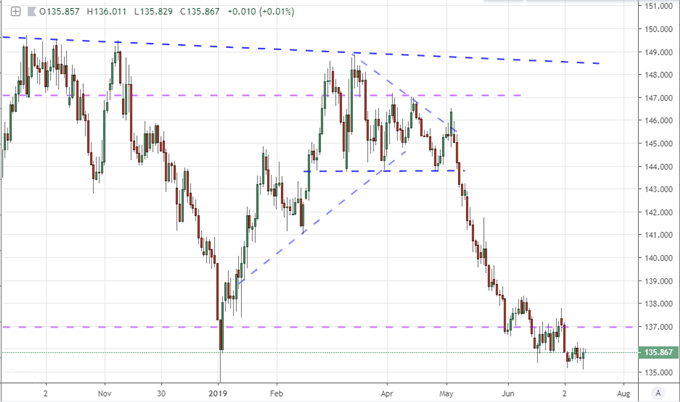 Another central bank making waves this past session was the European Central Bank (ECB). Minutes from the world's second largest central bank most recent policy meeting made clear that the group had discussed routes for further policy easing beyond the QE program that was capped this past December and the targeted-LTRO which was introduced some months ago to supplement. This moves this central bank into a position that it is arguably competing with the Bank of Japan (BOJ) for the title of the most dovish major central bank - and possibly the most desperate. 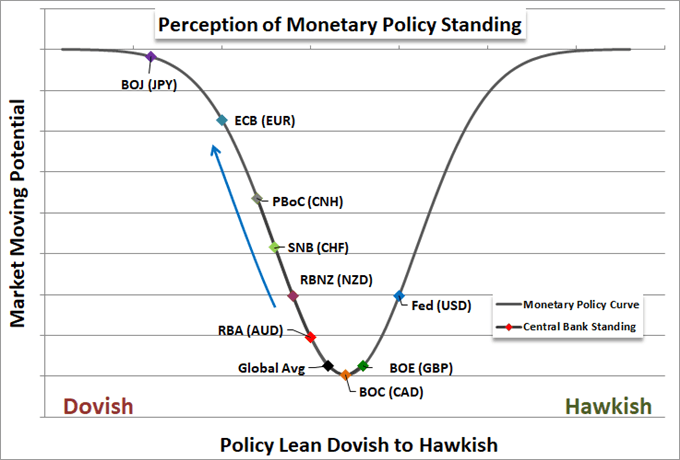 The ECB may also be seeding the next stage of escalation in global trade wars. US President Donald Trump has repeated accusations these past few months that China and the EU were using monetary policy and manipulation to afford themselves economic benefit through currency devaluation and unorthodox means. Reports suggest the President has tasked aides with investigating means to devalue the Dollar since the Fed seems unwilling to relent to his demands. Against that backdrop, the IMF's report on the European Union downgrading the region's economic forecast alongside encouragement to further pursue stimulus to support expansion can easily stoke conspiracy theories in the White House. With the group's current director, Christine Lagarde, due to head the ECB later this year; it can naturally be considered a warning that further Euro devaluation is ahead. We don't really need further pressure to inspire currency wars.

Another potential breaking point for the spread in the global trade war may be France's decision to move forward with a 3 percent digital tax on major tech companies' revenues earned in the country. Given the concentration of these types of firms under US ownership, it naturally finds its way to Trump's desk. The White House is reportedly studying the tax to see if it is disproportionate and/or hurts the US in particular. Given recent history, they will likely find it as a particular burden to the US which the government will pursue. Meanwhile, the US-China pressures have been revived after the President tweeted that China was "letting us down" as they were not purchasing US agricultural goods 'like they promised'.

Appeal in Oil and Loonie - And No, Not for Correlation

Further trouble between the US and China comes from reports that senior Trump administration officials agree that China defied the country's sanctions on Iran by importing a million barrels of its oil. That said, there is no agreement on what kind of consequences will be applied in this case. Oil is itself a pressure laden economic theme. I am not a strong believer in the supply side drive in the commodity, but there is undeniably an overwhelming amount of pressure on that side of the equation. Reports that the UK Navy prevented an attempt by Iranian controlled boats to seize a British cargo ship suggests the political pressures are mounting. 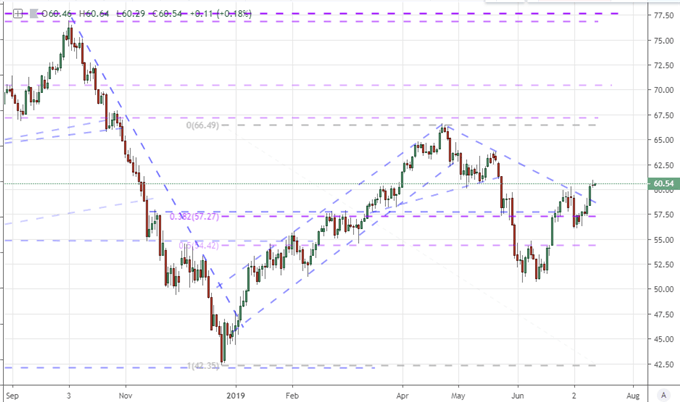 Another benchmark without a decisive fundamental theme to keep an eye on is the Canadian Dollar. Typically, we draw correlation between the Loonie and oil is a useful relationship to exploit. However, at the moment, the currency isn't drawing on its natural production of crude and its shipment to the US as the US is now a net producer and the commodity is more range-prone than trend. Despite this fundamental break, the currency is still hosting an interesting technical bearing. The rally this past month is practically universal, but its momentum has flagged without a clear fundamental sponsor. While stretched in shear technical terms, committing to a distinct move would be best served by a catalyst. We discuss all of this and more in today's Trading Video. 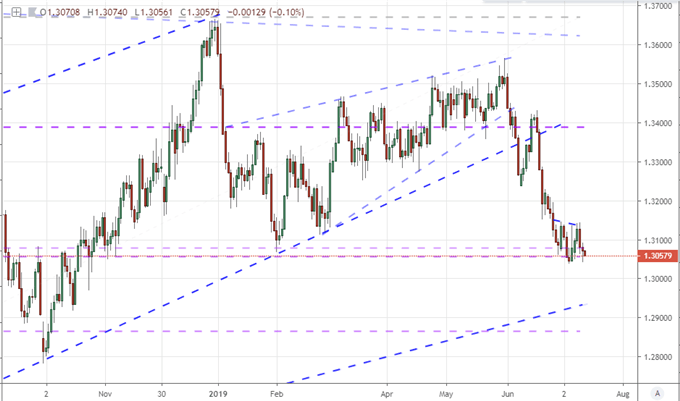