The Fed Reinforces Its Readiness to Cut

In the host of active themes that share control over the global markets, monetary policy as a stop gap for faltering growth proved its present position as top influence this past session. While there were a number of events that would contribute to this systemic matrix this past session, it was the Fed's intentions that held the greatest possible sway over speculative appetites. And, the updates from the central bank's course would not disappoint. In the first day of his testimony to Congress, Fed Chairman Jerome Powell responded to a range of questions from the pressure applied upon him from President Donald Trump to his belief of where the natural rate of unemployment stood. Traders would sift through all of it to register specifically what would reinforce or reverse the market's growing expectations for impending and eventually-deep rate cuts from the previously hawkish central bank. Two points stood out in particular: his suggestion that the robust June employment figures doesn't change their assessment which has seeded anticipation of easing and that any recent 'improvement' in trade wars was not genuine enough to brighten their outlook over external risks. 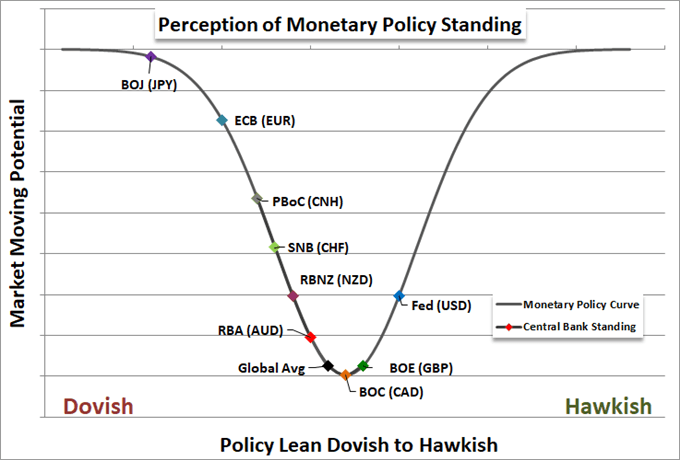 The other noteworthy US monetary policy event this past session was the FOMC meeting minutes. Though the group was fairly thorough last month between Powell's presser and the SEP after the meeting, the detailed insights showing "many" Fed members saw a stronger case for a rate cut offered a tangible update to suggest earlier rate cuts. We can see that was definitely reflected in the markets as Fed Fund futures already certain of a cut at the end of this month ratcheted the anticipation even higher - to a larger cut. As high as conviction may be, the reach of this external support is questionable. It was Bank of Canada (BOC) Governor Stephen Poloz that said after his central bank held rates unchanged that monetary policy cannot weather further troubles born from threats like global trade wars. That makes the upcoming combination of a second day of Fed Chairman congressional grilling and the US CPI inflation update a more nuanced event risk. The more support the Fed seems to offer without tangible market payoff, the greater the risk of a collapse under the fundamental realization that the world's central banks no longer support an effective safety net.

A Dollar Take Versus the Risk View

In response to the headlines this past session, there was a remarkable response from key assets. However, it is the collective performance of these disparate markets that offers unique insight into the shape of the financial system's landscape. For a baseline assessment of the 'risk' impact from the Fed's capitulation, I like to refer to the US indices. While most assets with a dependency on sentiment advanced for the session, it is US indices that carry the banner for unrestrained speculative appetite. The S&P 500 and Dow would both charge to record highs intraday Wednesday. Yet, there was a notable lack of enthusiasm after the initial shove which now seems par for course when it comes to risk runs. Meanwhile, global shares and emerging markets found no further progress after the initial gaps higher while carry trade and global government bond yields outright struggled. This is not at all reassuring for even a coast higher in sentiment, and traders should be wary about a hands-off risk chase. 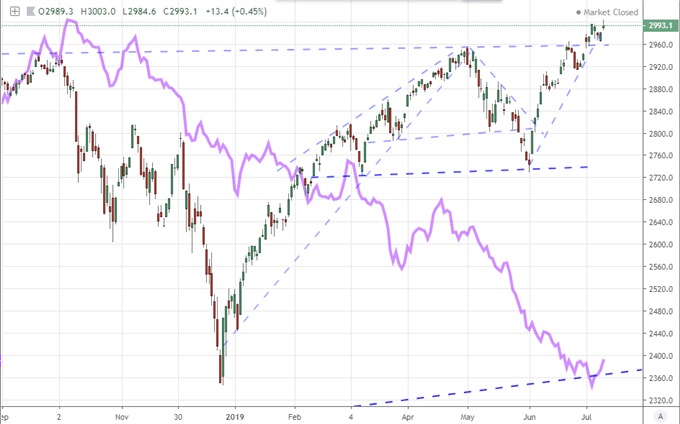 As for the Dollar, the response from the currency was not nearly as complicated. The benchmark dropped broadly on the day. We can chalk this up to the Greenback's bleeding its carry advantage over ever other major counterpart, but the currency neither posted an exceptional charge when rate hike expectations were still accelerating, nor has it dropped dramatically in recent weeks when the forecast has already flipped to fast-paced rate cuts. Merely adding weight to what the market already expects does not seem a reliable source for a resurgent trend. It was particularly notable this past session that both USDJPY dropped and Gold rallied however. The former pits two competing issues - Dollar yield loss versus positive risk response - head-to-head while the latter is a safe haven with a particular financial-stability contingent. If the Greenback continues to slide, the commodity may very well be best positioned to take advantage, but a cross that doesn't compete for influence (like EURUSD) may require less systemic buy-in. 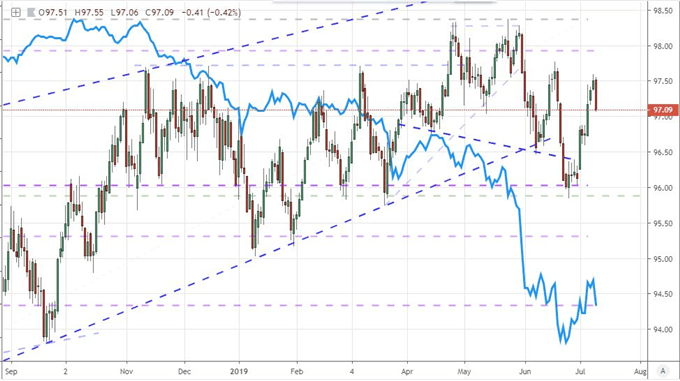 Trade Wars and Recession Fears Rumble in the Background

While the focus Wednesday was monetary policy - and that is likely to remain the case over the upcoming session - the other overpowering themes were still percolating in the background. On trade wars, we didn't have any further provocations by the White House to pursue tariffs on Europe to punish in the airplane manufacturer dispute; but attention did fix on the US-China relation. On the one hand, there were reports that the US held silent on the situation in Hong Kong in exchange for trade negotiation points; while on the other, China is clearly upset over the United States plan to sell weapons to Taiwan. That said, the truly troubling note this past session were reports that Trump had instructed aides to investigate ways of devaluing the Dollar. While not official, this is readily believable and enormously concerning for financial stability.

And, though it may seem utterly prosaic, the concern over a stalled global economy continues to eat away at the foundation of an otherwise impressive speculative charge. The Chinese Finance Minister, Liu Kun, stated his believe that the world's largest economy would hold to its forecasted range of 6.0 to 6.5 percent growth. We will see whether the official 2Q GPD figures due Monday fulfill those expectations. In Europe, two companies considered bellwethers for economic health - BASF in Germany and PageGroup in the UK - have issued profit warnings, citing troubled growth as a key source of their ills. We'll see if this same struggle is present in the United States with the 2Q earnings season beginning in earnest next week (with reports from Microsoft, large banks, Netflix, Johnson & Johnson and more).

Outside the systemic and its representatives, there were a few interesting moves to note regionally through the FX market. The Sterling jumped into an important run of May economic data. Ultimately, the statistics were consistent and supportive of the economy. That said, they did not provide motivation for the currency. UK May GDP grew 0.3 percent in line with expectations (after -0.4 percent contraction), construction grew a faster 0.6 percent than expected, industrial production expansion was solid at 1.4 percent and the trade deficit closed further than expected to 11.52 billion pounds. Everything seemed to line up for the Sterling, but that is not what the market would move on. What is truly concerning in the UK and for its markets is the state of Brexit following the government shuffle, and this carries a very clear, negative connotation. So, while weak data could have accelerated a slide, improved data would struggle to mount a recovery. 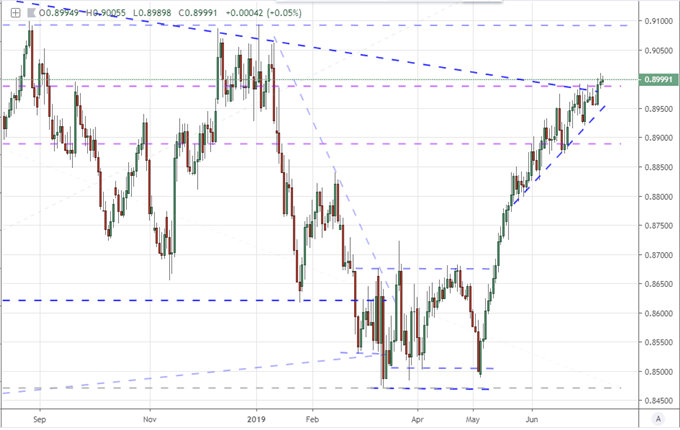 The Canadian Dollar fell into a similar deadzone. The Loonie was primed for the Bank of Canada (BOC) rate decision, but expectations were set low. There was little expectation that the group was planning any changes to its policy stance, and they did not disappoint on that front. Ultimately, the insights to follow the steady bearing offered little to leverage for speculative advantage - whether bullish or bearish. The Loonie floundered on the day, which meant USDCAD would not trigger its inverse head-and-shoulders pattern nor would GBPCAD be able to spur reversal to its very overstretched position. Keep tabs on both, however, as fundamental winds rise and fall. We discuss all of this and more in today's Trading Video. 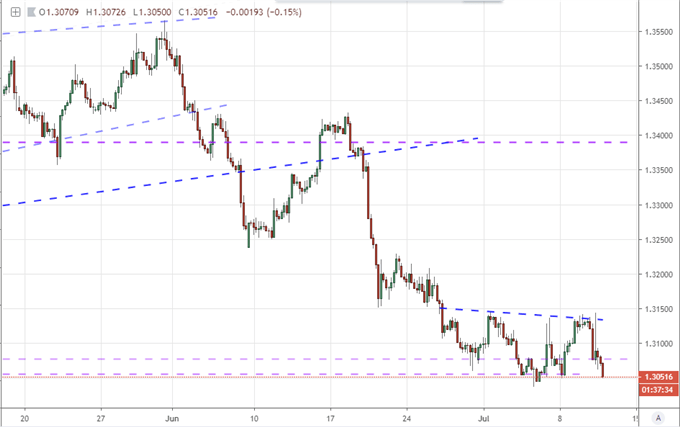