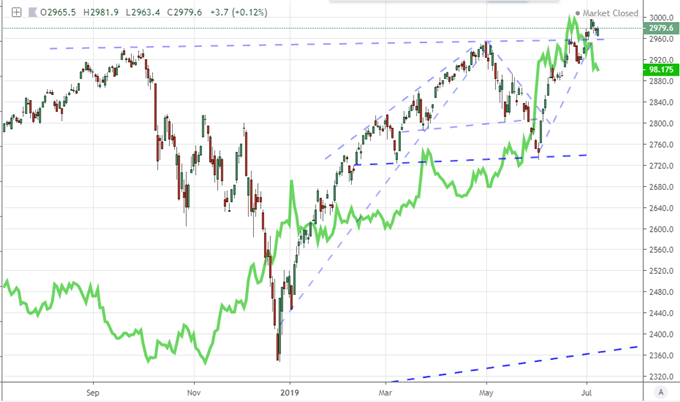 Dollar, S&P 500 and Gold on Volatility Watch as Powell Set to Testify

The reaction this past Friday from the S&P 500 and other benchmark US equity indices to the June US employment report made clear that monetary policy is the top fundamental theme in the broader financial markets at the moment. A drop from his benchmark risk asset despite the marginal improvement in economic health indicated hope for greater external accommodation (translation: Fed hikes) mattered far more for temporary relief than any long-term hope of shoring up the yawning gap between financial cost and tepid value. After a relatively restrained two days of trading, we are now wading back into economic docket items that will tap directly into this particular interest.

While there are a few monetary policy-direct and related events on tap for the upcoming session, one region's listings promise far more weight than all the others. On the US calendar, we have Fed Chairman Jerome Powell's first day of his annual economic testimony before the House of Representatives. This is an opportunity to see his own views separated from those of the more watered down group perspective. If it comes off that he is not leaning towards earlier rate cuts or an overall more aggressive regime of easing, the impact for the Dollar and risk trends could prove substantial. In terms of stretched speculative view, the Greenback is unlikely to get the relative value of a slightly less dovish player relative to its major counterparts. That said, the S&P 500 and Dow pushing record highs - despite the more middling performance of other risk assets - presents an inflated premium that could collapse on itself. Alternatively, carrying the market higher is not difficult, but generating the level of true enthusiasm to sustain the trend of the past month - already at record highs - would likely take more than they can offer.

Another event of significance when gauging the intent and influence of the world's largest central bank through the upcoming session is the FOMC (Federal Open Market Committee) meeting minutes. This is effect a more detailed transcript of the June monetary policy decision. While there is certainly opportunity for clarification on key points and undercurrent, Powell's press conference and the Summary of Economic Projections (SEP) immediately following the rate decision itself gave significant insight. If this is truly the top fundamental theme however, nuance matters - especially after the questionable charge of enthusiasm after the June 19th hold that offered up a median forecast among its members of no expected change in interest rates through 2019 against a market forecast for three 25 basis point cuts through December at the time. 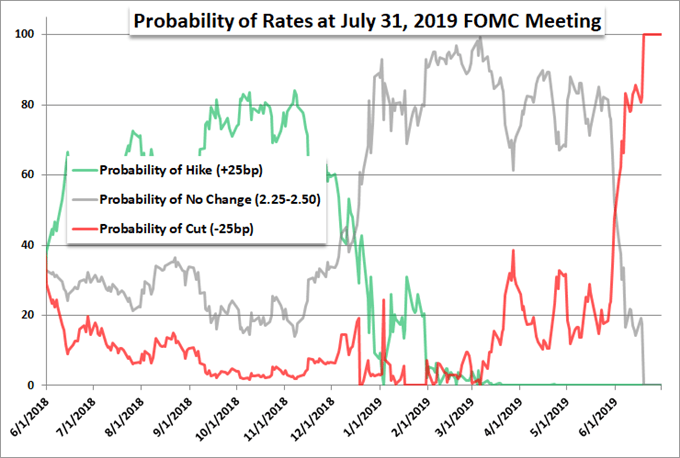 While monetary policy has the fodder necessary to stoke serious market interest and volatility to match, there are other systemically-important fundamental themes to keep tabs on moving beyond just the next 24 hour time frame. One such matter that seems to be creeping into the mainstream is the troubled health of global growth. Looking through the top business and economic stories in Google today, there were at least 5 articles discussing the probability, risk or signals of a possible impending recession. Checking Google Trends, search interest in an economic contraction has significantly higher this past year and is proving quiet volatile. 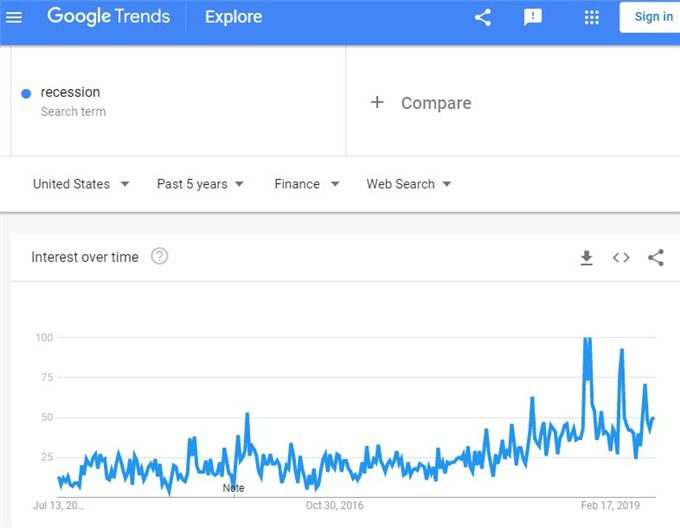 If we are looking to further evidence of a stalled US or global economy, we have ancillary data points like the past week's monthly manufacturing and service sector activity reports to fill us in until the official quarterly GDP reports from the government are released (China's 2Q release is first up this coming Monday). There are also market-based signals and models that seem to be garnering more and more attention even though they are usually overlooked. The 10-year to 3-month Treasury yield curve inversion for example has gotten considerable attention and is now 30 trading days underwater. An even more 'wonky' signal was the New York Federal Reserve's recession risk indicator which placed a contraction in the world's largest economy over the next 12 months at 33 percent. That is not a reading of certainty, but history back to 1960s shows only one instance where we have seen the model offer even this degree of potential and correct before going over the cliff. 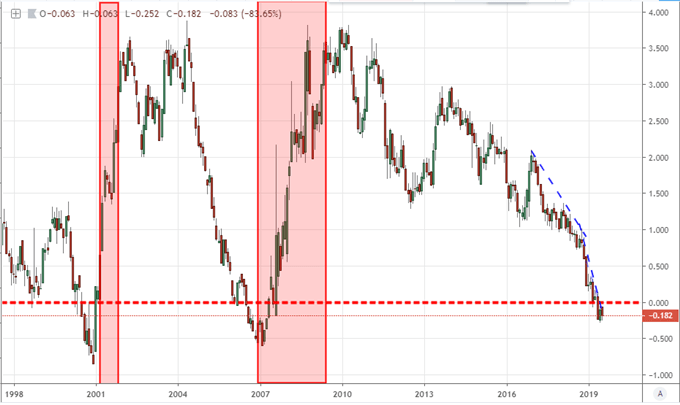 Less high profile at the moment is trade wars. The state of growth-crushing protectionism is as yet unrelenting, but there is at least no progress towards further competition. Enthusiasm seems to be fighting for small victories. That said, the risk that the US and China resort to threats for either the spread of tariffs to engulf all of their counterpart's goods or delve into further unorthodox policy such as rare earth material throttling is not even unlikely. The greater risk is for threats of new taxes by the US against Europe or even globally against foreign autos is finally pursued in a change of strategy. It remains the case that sentiment is still leaning positive with de-escalation only resulting in the avoidance of future pain. The imbalance for impact remains with a deterioration of conditions.

If You're Looking for More Volatility, Keep Tabs on the Loonie and Pound

The Dollar isn't the only candidate for volatility - and perhaps even productive trend development - starting over the coming session. The Canadian Dollar is facing an important event in the Bank of Canada (BOC) rate decision with a unique buoyancy in policy that seems to defy the trend towards more accommodation from most of its other peers. The swaps market maintain the Loonie's benchmark rate is the most resilient to the global dovish turn, which means it likely has the most to lose should reality dawn. A neutral reading would actually be treated as a hawkish event which would make for a very interesting situation with pairs like AUDCAD and CADJPY. Alternatively, dovish capitulation could spark some remarkable volatility for USDCAD and again AUDCAD. 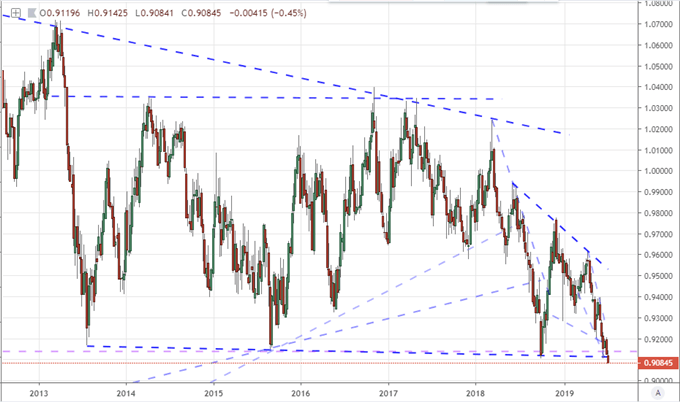 A step down in certain volatility fuel is the run of May data for the UK. The figures due are speak to critical measures of economic health and thereby the value of local assets and the British Pound. While I will seek updates for industrial production, construction and trade, its the monthly GDP report that will truly deserve our attention. With fears of a 2Q contraction building, a weak showing in this interim update can only fuel concerns over the fundamental balance of the country whether or not a no deal Brexit comes to fruition. Speaking of, Prime Minister candidate Boris Johnson reiterated that the country must prepare for a split without a deal come late October. Delivered on the same day that BMW announces it is shifting some engine production from the UK to Germany ahead of the final decision shows there is still irreversible damage being down regardless of the outcome in for this delayed decision. This event risk will prove more effective as possible accelerant for the existing bearish trend than an opportunity to turn the tide. There is no shortage of battered Sterling crosses. 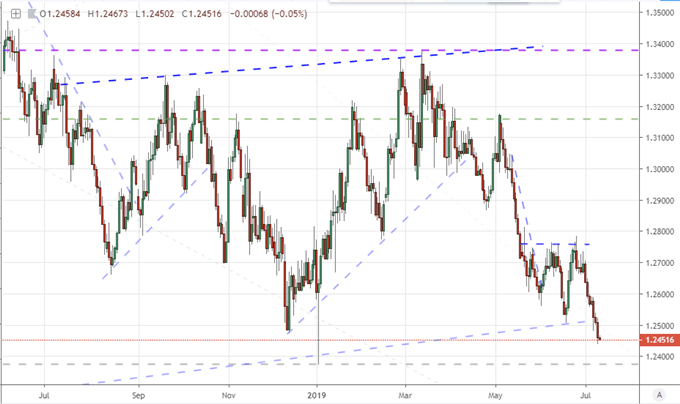 And, through it all, whether we are referring to desperate monetary policy, recession risks or trade wars; the unsettling winds all seem to form a backdrop of support for gold. The precious metal benefits from a need for safety but its role as alternative to sovereign destabilized financial assets is what has truly padded its potential. Whether signal or trade objective, make regular review of the commodity. We discuss all of this and more in today's Trading Video. 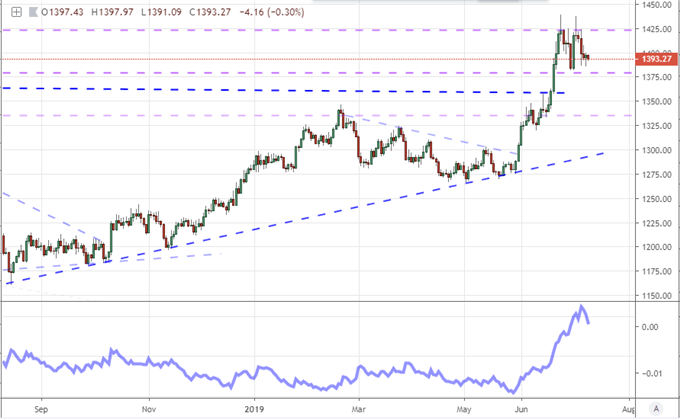