Dow, S&P 500 and Nasdaq Hit Records Before Holiday, EURUSD Looks Out to NFPs

With the markets fully prepared for the drawdown in liquidity for the holiday period - the restraint in intraday activity and reduction in volume reflected that well - there was a reasonable expectation that Wednesday would coast into a nondescript close. What we ended up was starkly different from the standard playbook. Instead of taking the path of least resistance as stretched speculative interests dialed back from over-exposure, we instead would find the US equity indexes push even higher. That would lead the S&P 500 to yet another bullish gap on the open which earned a new record high on both an intraday and record basis. Yet, unlike the similar development this past Monday, the past session's strength held out for a positive close. Furthermore, the celebration was not reserved for this broad index with so much derivative interest behind it. The blue-chip Dow Jones Index and tech-heavy Nasdaq 100 would earn their own record high close. 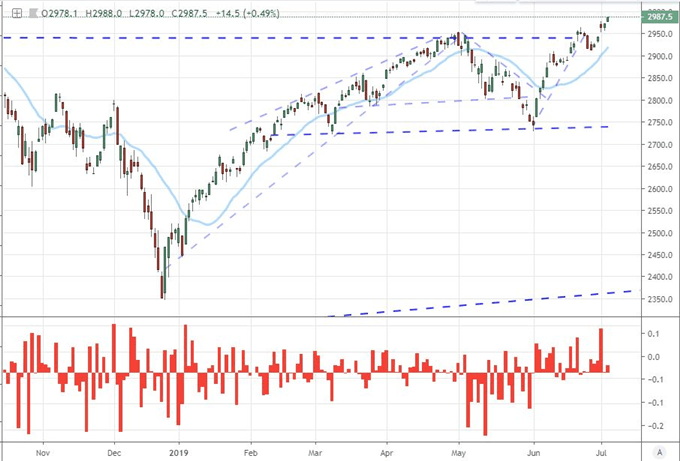 The charge before the US holiday is unusual. The fact, that the move pushed markets to fresh records even more remarkable. Yet, it is the contrast to the rest of the speculative environment that really stands out. While there was a sympathy advance across a few other risk-leaning assets - including global equity equivalents - the vast majority of such markets were spinning their tires. Emerging market benchmarks and carry trade assets are return-explicit benchmarks that struggled. Perhaps most noteworthy of all in my book however remains the incredible disparity between a pace setter like the S&P 500 and the course of global government bond yields which source both growth potential as well as sheer speculative appetite. 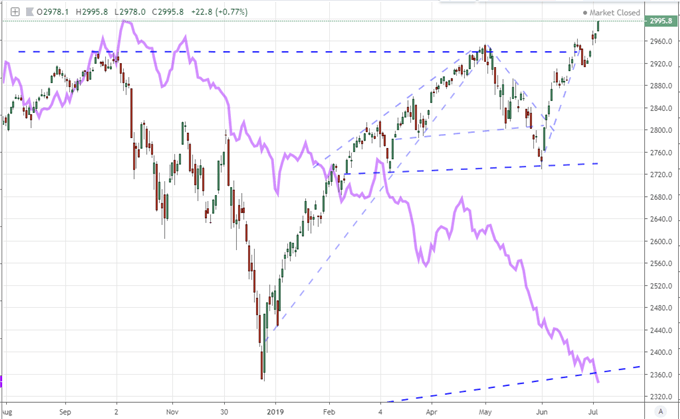 For fundamental motivation this past session, I can't say that the backdrop was particularly convincing to justify a sense of certainty behind the rally. For monetary policy, the expectation that central banks will go 'all in' to support investors remains well founded between Fed Fund futures showing debate over full 50 or 75 basis points worth of rate cuts this year and news that IMF Director Lagarde is ready to take the wheel from Draghi, most likely to a dovish continuation. Pit this against the very troubled outlook for global economic activity. The US 10-year to 3-month yield spread inversion is deepening the conviction that the world's largest economy is heading for the rocks. Then again, the run of service sector activity reports from across the globe seemed to soften some of the assurance of impending recession set by the manufacturing activity data at the start of the wee.

If there was one particular thematic issue that earned more of my scrutiny than any other, it was trade wars. Yet, with the exception of there being some confusion as to the direction the US is heading with Huawei treatment, there really wasn't much on this front in the mainstream sense. However one particularly severe threat of escalation was floated by the US President himself. In a spurious tweet, Donald Trump opined that the US should join the 'big currency manipulation game' run by Europe and China or be left behind. Rarely does a global leader speak so openly of distorting their local currency. This is tantamount to threaten a currency war. Unlike its economic trade equivalent, a competitive FX effort is far more messy and prone to rapid escalation to extremes. If we head in this direction, a financial crisis will likely precede a downturn in economic activity.

Looking ahead, the US markets will be extremely thin through Thursday with the exchanges offline. What's more, investors who remain - whether local or in different countries - will assume through experience that the period will be quiet through sheer habit. That said, we should not be so comfortable in our default settings of over-indulgent risk taking. Beyond the in-flux systemic issues of trade and political instability, we are also facing a few scheduled events that can nudge volatility to life. Top event risk through week's end is the June NFPs report. Clearly, there is heavy speculation around Fed policy intent and it will be read as an update for such. However, the greater potential is for the data to unsettle growth forecasts. This is not a scenario where a 'bad reading leverages a favorable market response' through stimulus hopes. 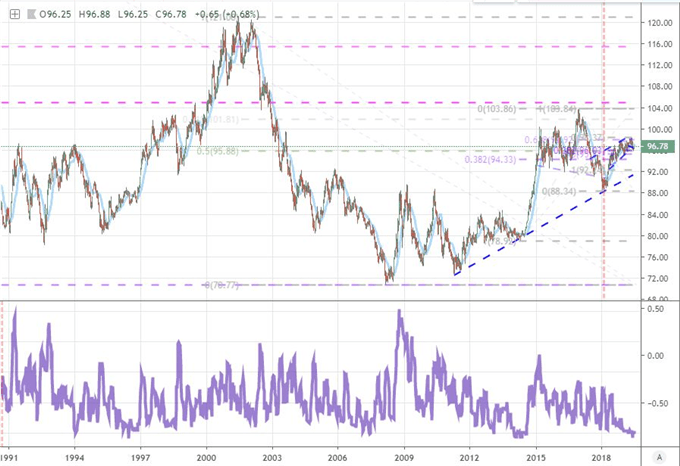 If you are looking for a pair that can further exploit the Dollar's anticipation, consider USDCAD. Due at the exact same time as the NFPs, Canada will report its own local employment report Friday. This is similar to the trade readings from both countries released Wednesday at 12:30 GMT. Yet, in the case of the jobs data, there is an unmistakable history of generating severe volatility with sufficient surprises in the updates. The Canadian manufacturing activity report from Ivey will be another important reading - particularly with the Bank of Canada (BOC) due to deliberate monetary policy next week, with swaps pricing in a 95 percent probability of no change.

Outside the most systemic themes and top profile of the Dollar with its monetary policy implications, there are a few other markets to keep tabs on. If you're looking at EURUSD, the inability to clear its frustratingly persistent, narrow range is not just the result of the Greenback's features. The Euro is dealing with an overtly dovish outlook that is only furthered by the Lagarde news, but reports that the European Commission would not pursue debt proceedings against Italy is a sliver of relief. That allows the Euro to play more of the alternative-liquidity-currency role rather than divert those funds to something that isn't dealing with its own internal strife. 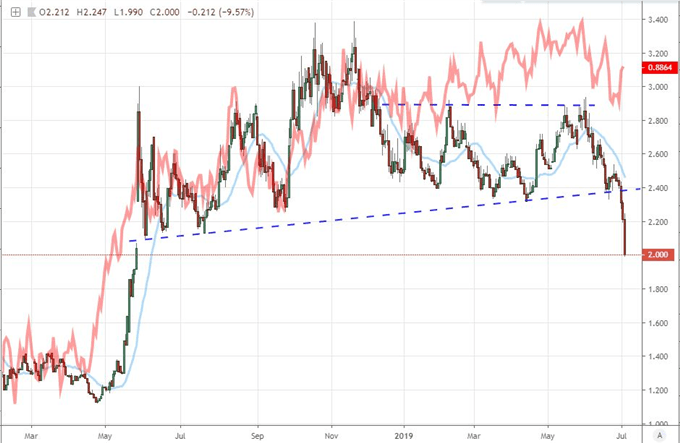 The Sterling is another currency that is facing its own fundamental issues - though to much less favorable results. The Brexit focus remains, but we are still multiple steps away from the negotiations to restart in earnest as we are still awaiting clarity on the Tory leadership race. The questions of the winner and their genuine policy intent will keep outright moves in the Pound under wraps. Yet, that doesn't mean the currency won't move at all. The Pound continues to stumble with remarkably pressured GBPUSD and EURGBP while the likes of the GBPCAD has handily cleared its support. 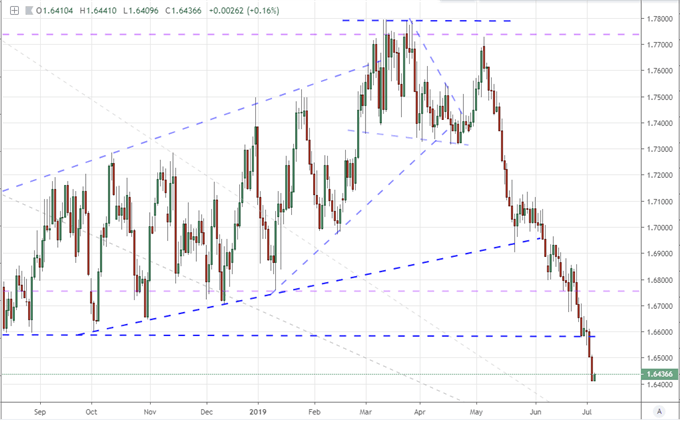 Outside of the convenient regional aspect of the currency war, my big picture assessment of our conditions remains a product of gold. The precious metal is still connected to its safe haven elements but it is far more reflective of its 'alternative to traditional currency' role. The commodity remains in reach of is multi-year high, but there was a notable failure to mark a fresh break through Wednesday's session. A tentative effort to surpass the June high resulted in a sharp intraday reversal that instead left us with the largest upper wick for the market going back to November 2016. If there is anything we should have learned of late, though, it is that textbook technicals (and fundamentals) should not dictate trades on their own. We discuss all of this and more into the end of the week in this Trading Video.

Chart of Gold and Wicks (Daily) 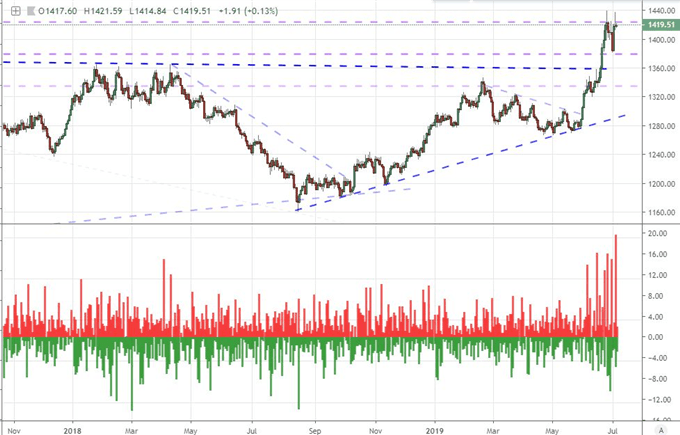