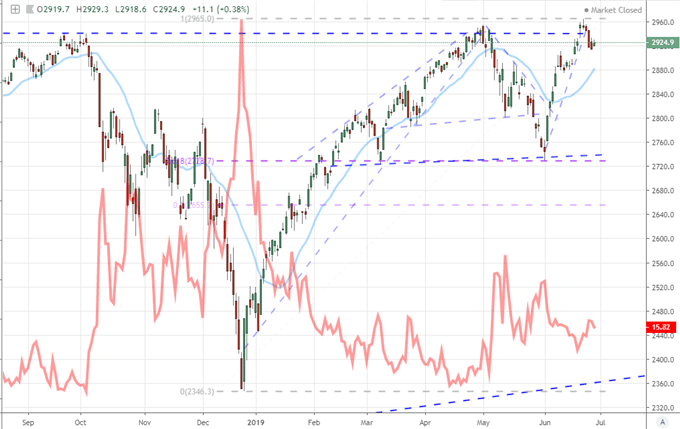 EURUSD and Risk Asset Wind Up Before G-20 Summit

Take Stock Before the G-20

While there are still a range of fundamental themes that can readily take the reins of global financial markets, the final trading session of the week and Monday's open will be fixed on a single issue: trade wars. It is rare when we are offered a clear event with explicit timing that can reasonably be expected to direct the unpredictable course of the ongoing trade disputes, but the upcoming G-20 summit is just such a rarity. The gathering of leaders from some of the largest economies in the world is expected to touch upon a host of issues, but the market sees the greatest possible impact to markets through the steadily deteriorating connection between economies along with the severe and broad repercussions it carries. If discussions go well, we could see an enormous burden for growth and investment lifted. Alternatively, the situation is such that a merely unresolved situation will readily invite escalation. Either way, we are facing the possibility of severe volatility with direction outcome-dependent. Given the uncertainty and stakes, it would make sense that there is little interest in committing to a clear view on risk trends before the communique and side-line remarks are processed.

When there is high probability of significant movement owing to an event with a split probability of outcome and a loss of liquidity to contend with, it is wise to consider your exposure. Objectively, it is not a good time to take a large risk position before such a mix. To presume the outcome of these two-day talks is to invite enormous risk. It is also the case that this is not one of those matters that carries a disproportionate impact opportunity - such as a bullish outcome carrying a far greater potential than a bearish equivalent, which can be exploited. It is almost inevitable that something of substance is said at the meeting with a matching market impact. While there is always the chance that a critical shift in global policy is announced on the first day of the meeting, there would always be a risk that views could be reversed the following day. A Saturday...when the markets are offline. This translates into a serious risk of a weekend gap. This is the time where one cuts risk they are not fully confident in. 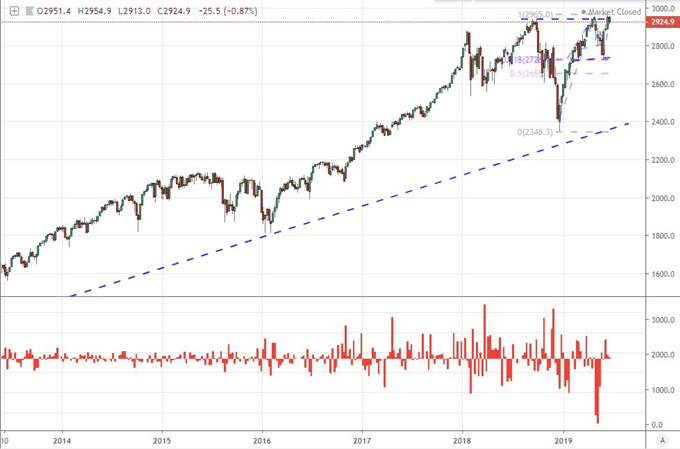 It is unreasonable to presume that we should fully divest ourselves from the markets. If we were to cut all exposure with every unknown, we would have the turnover of a scalper. That said, it is critical to gauge the risk/reward of each position held. If the return potential is tepid with a wide risk of loss, it is probably better to cut out and reenter if the conditions end up favorable. Otherwise, avoiding the fallout can save against serious loss. There are very few areas of the market that we can reasonably look to as active opportunity during the downtime of the weekend: whether as an outright trade vehicle or hedge. One of the view options is the heavily disputed cryptocurrency space. While its legitimacy is under reasonable scrutiny, it is still very liquid during the weekend. That said, following an 8-day rally through Wednesday, Bitcoin suffered its worst single-day loss through Thursday since January 2015. 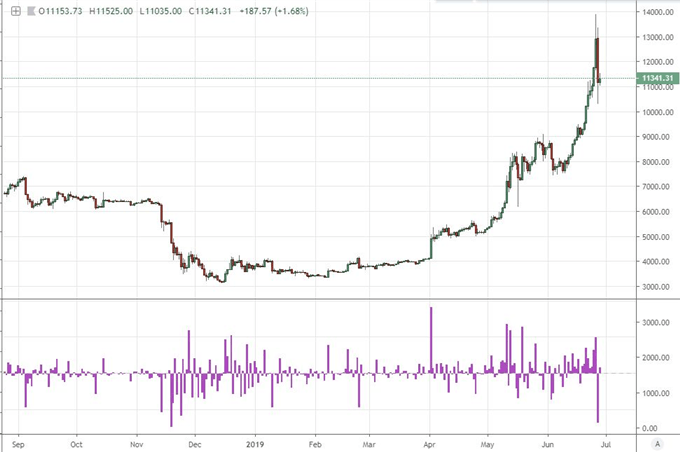 All the 'Other' Fundamental Matters

As anticipation takes over, it is worth remember that there are other fundamental winds that will carry through the tempest of trade war headlines, and may event stir activity where the US-China relationship generates less hold. Monetary policy for example is an important potential byproduct of the Summit. We have seen a sharp and deep reversal in sentiment through central bank policy with gradual normalization giving way to further accommodation despite the fact that these groups are already pushing the bounds of the standard tools. Much of interest lately has been around the Federal Reserve's (Fed) dovish shift with a market that has gone so far as to price in three, 25-basis point rate cuts through year end. That conviction has ebbed slightly over the past week, but the belief of multiple rate cuts looks to be unshakeable. We are due the Fed's favorite inflation reading Friday (the PCE deflator), but the trade war tide will more likely raise or lower the chances for aggressive easing. 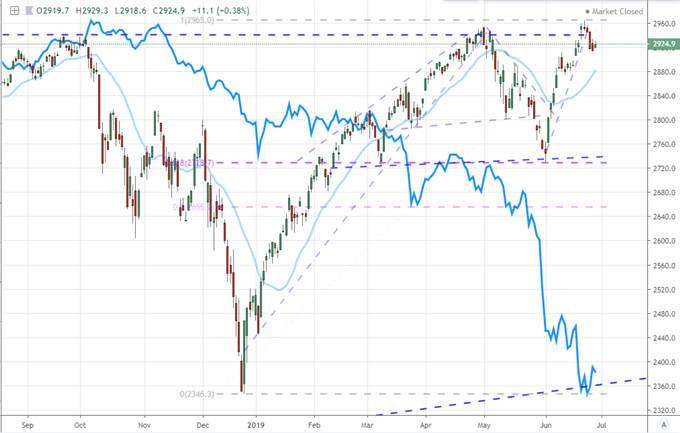 If trade wars worsen, the outlook for growth intensifies and the artificial buffers from central banks will be expected to kick in. That doesn't make for ideal options in the FX world. EURUSD may be a candidate in such an outcome as the ECB's dovish response will have already been priced in with a Targeted-LTRO while the markets are still trying to evaluate how deep the Dollar's central bank-losses should run. Alternatively, the opposite outcome of a course reversal on competitive growth measures would likely lift risk assets and ease up the central bank intensity. There are few pairings more well-suited to such an outcome than USDJPY. It is worth noting the release of Fed's favorite inflation indicator - the PCE deflator - but that is not where the true potential lies. 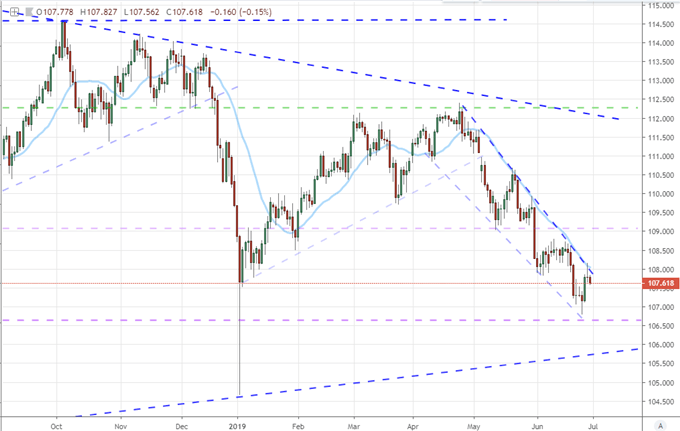 Another theme with direct exposure to this weekend's headline fodder is the assessment of global growth. We've seen a material drop in both current measures of expansion as well as sentiment readings that better serve as forecast. A reading of US personal income and spending serve this interest well, but any measurable move in this largest consumer's interests or means will not compensate for hundreds of billions of dollars in tariffs - whether added or removed. The risk of recession is being aggressively debated through different levels of the market, with speculators blindly assigning confidence to the central banks' capabilities on one side while the persistent 10-year to 3-month Treasury yield inversion keeps the recession drum beating. If all trade wars were to cease as of Monday, would we be able to avert an economic slump? I would argue that we wouldn't. 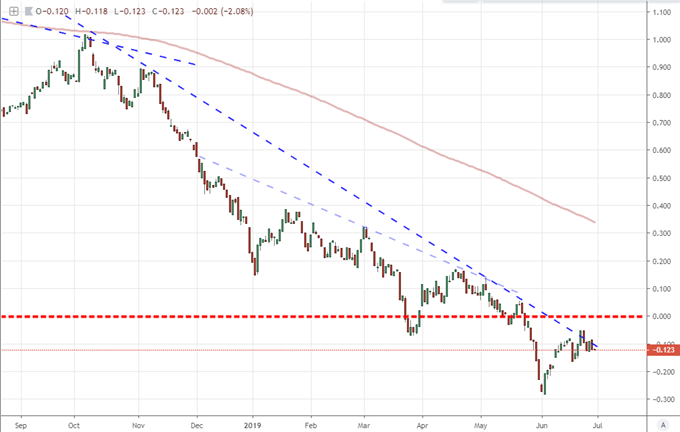 While there are those assets that are right in the middle of the fundamental fireworks (USDCNH) and others that are simply so systemically important as to inevitably reflect the seismic shifts in the financial system (S&P 500), there are other specific markets that should be monitored to closely. While China is directly engaged with the US in the tit-for-tat economic fight, the emerging markets have been absorbing a lot of the collateral damage from the stand off. Should the situation deteriorate or improve, this highly risk-leveraged asset would likely exhibit a strong response. 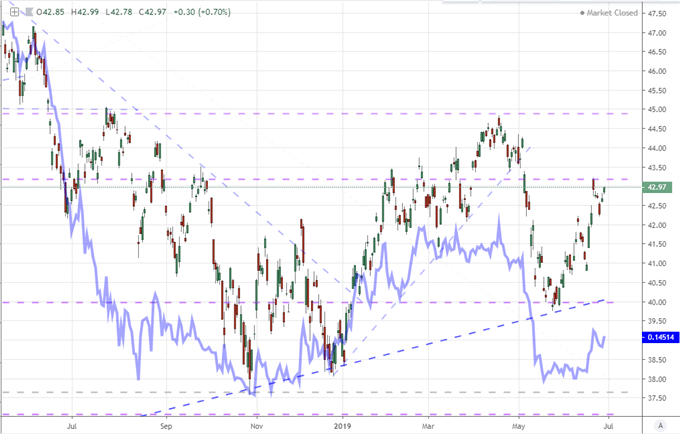 Given the precarious position of the US Dollar - breaking critical support on a 13-month rising bull trend only to stop immediately below support - there is a potential risk of volatility. While the Greenback is staged for a significant rise or fall, we must in turn consider where the capital is diverted towards or away from. More often than not, market preference tends to follow the lines of liquidity. In the FX market, in particular any flight from the world's largest market would find a disproportionate appetite for the second most liquid. That is the Euro; which though it has its own issues, they are not considered pressing. For the Pound and Yen, the Brexit anchor and leverage afforded carry crosses will likely redirect capital flow. Consider a strong indirect move for the Euro that takes advantage of a counterpart that is held in the trance of anticipation for an event risk even further out. That scenario describes EURGBP well. 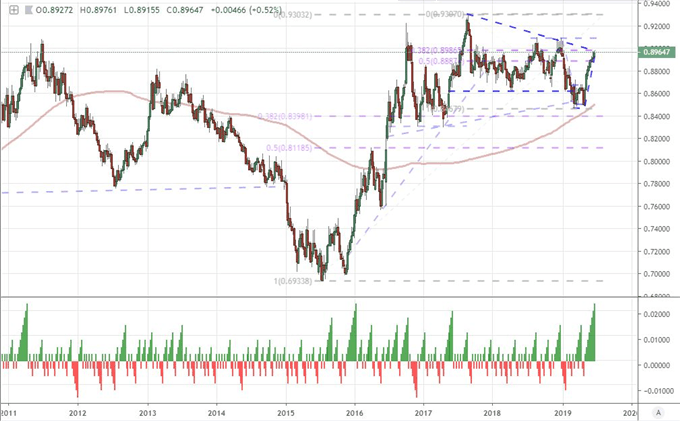 Finally, a word on the two commodities I review most often when evaluating the global markets. First, gold has seen its climb falter these past few days as the Dollar has steadied and risk trends have leveled out. This is neither an easy Greenback counterpart nor straight forward safe haven. Instead, the precious metal is a reflection of existential fear over the stability of sovereign assets and currencies. If trade wars were too sudden clear, it still wouldn't absolve the depreciation of currency through central bank easing. Oil on the other hand is a little more straightforward with its exposure. A growth and risk asset, it has climbed advanced 8 straight days through Thursday to match the longest climb since January 2010. That is likely nervous anxiety rather than true conviction of economic potential - much like equities. 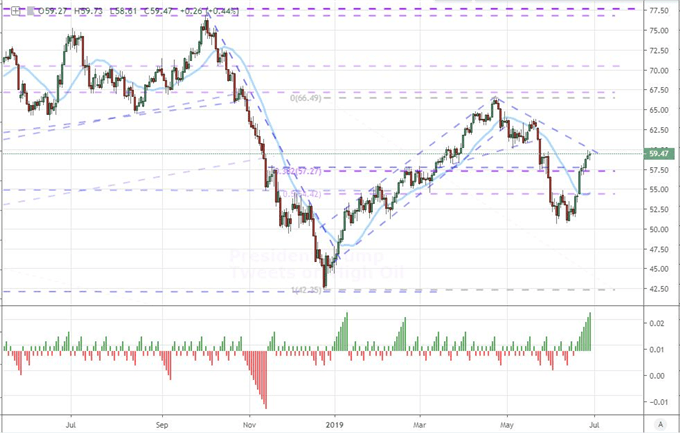