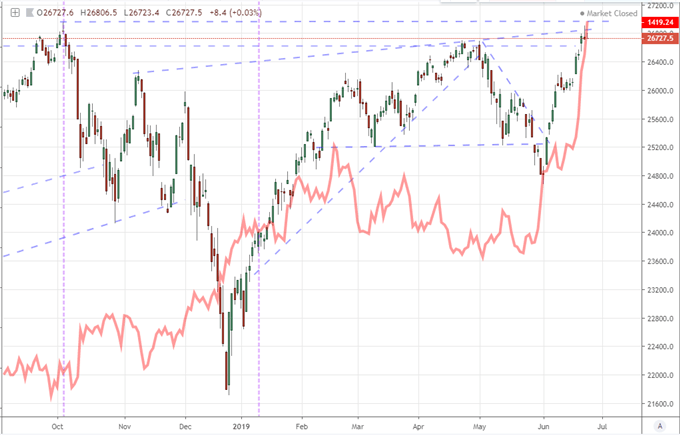 Last week offered one of the most substantial developments for the financial markets in sometime between the US indices return to record highs, the Dollar's breakdown and gold resurgence to levels not seen since 2013. While there are various fundamental considerations that contributed to these developments, the spark for these more dramatic milestones ties back to monetary policy. Despite the Federal Reserve's stated view of restraint (forecasting no changes to its benchmark rate range this year), the market interpreted enough willingness that it is now pricing in almost fully 75 basis points worth of cuts. That carries significant sway over speculators' hopes considering the past decade's bull trend was supported heavily by a global flush of stimulus and cheap funding by the world's largest central banks.

For those monitoring the Dow or Dollar for connection to US monetary policy, it is worth keeping in mind the incredible disparity between the Fed own view and that of the market-at-large. A 75 bp contrast in forecasts is not sustainable. Either Fed speak or data will need to justify the aggressive position in benchmark assets or we are likely to experience some rebalancing. Looking for mile markers for central bank motivation, we will start to come across a few important highlights Tuesday. Following such a controversial policy decision and SEP (Summary of Economic Projections) with reports of motivated outliers (Bullard saying he supported a 25bp cut and Kashkari a 50bp cut), members will make an attempt at transparency with a run of scheduled speeches. Among the fray today, I will be watching Fed Chairman Powell's remarks as he is in a capacity to speak for himself rather than the Board and Bullard's speech given his penchant for an 'insurance' cut. 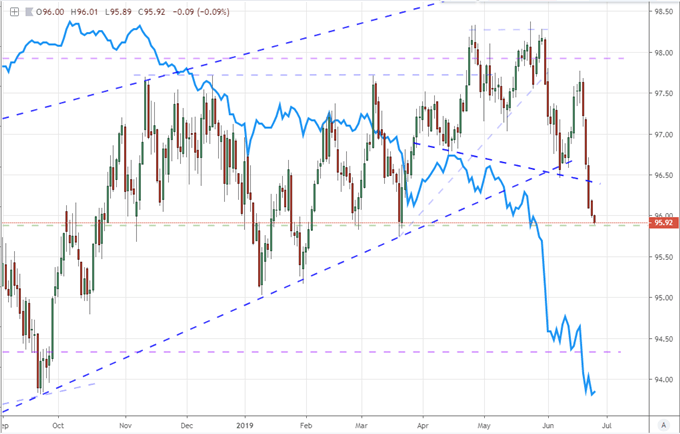 There is plenty of anticipation for more external support between the US authorities thawing towards reversing hikes, the ECB President's suggestion that QE is on the table as an option should growth falter and the BOJ's consistent drip feed of support; but the market is still not considering the question of effectiveness in their efforts should they be called into action. It is very likely that the critical point of effectiveness in these threadbare polices will not be considered until dependency hits critical mass and risk aversion is already under severe strain. Let's hope the burden is distributed before then, but keep tabs on pure financial measures like the S&P 500 relative to growth-connected measures like government bond yields in the meantime. 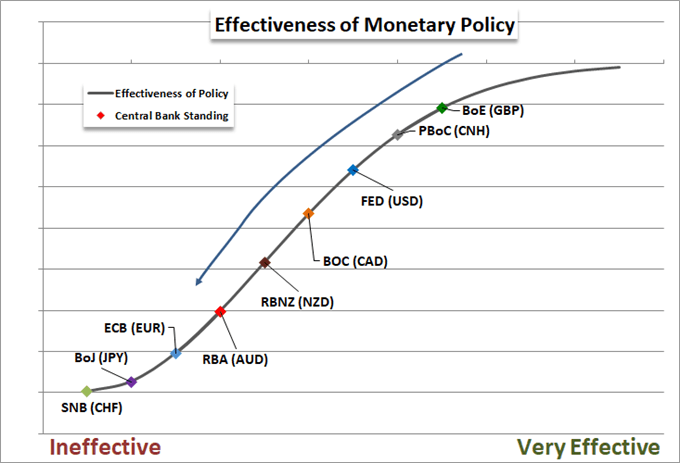 As monetary policy awaits its next charge, anticipation for trade wars is drawing the market's anticipation - and fears - forward. The G-20 summit scheduled for Friday and Saturday will invariably hit on multiple key issues, but the supposed deadline for Presidents Trump and Xi to sign off on a deal or else automatically escalate the already-painful reciprocal taxes will ensure this particular hurdle to growth will remain front and enter. It will be difficult to direct confidence in the economic standoff for better or worse before such a decisive meeting, but that doesn't mean the market will not be paying close attention to developments in the meantime. This past session China reported a 70 percent drop in imports of American agricultural goods and the Dallas Fed issued a survey of business leaders in its area that showed a third of respondents felt an impact from tariffs and 86 percent of those said it was a bad impact.

Further updates on trade await us between now and Friday with Tuesday's docket presenting a few notables. The US consumer sentiment survey from the Conference Board will be particularly important as it represents the world's largest collective consumer and there remains a considerable disparity between this report and the University of Michigan's own survey on the same theme. I will also keep a close eye on two key US earnings releases due after the bell. Fedex is a global shipping solutions company that is naturally affected by reduced trade, but it has specifically found itself in the news associated with claims that it had failed to ship a Huawei parcel which the Chinese government intended to investigate. Following Broadcom's $2 billion downgrade to revenues owing to the blacklisting of the aforementioned Chinese telecom, there is intense scrutiny on tech and chipmakers. That said, Micron Technology will offer an important read on the ongoing fallout. 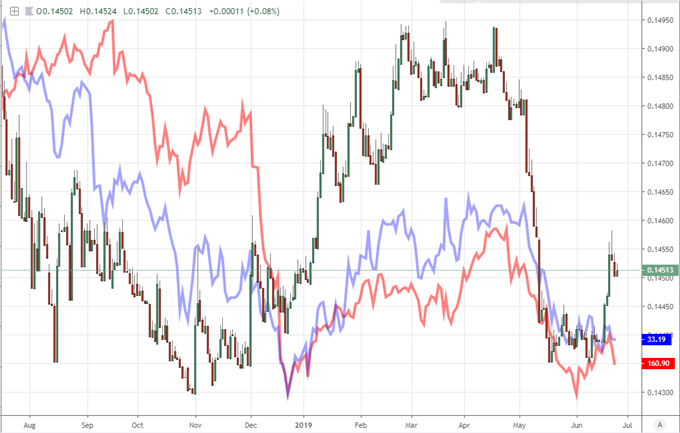 Another theme that deserves constant vigilance among global macro traders is the threat that political risk will be thrown off its increasingly dubious equilibrium. Following news last week that Iran had downed a US drone - an escalation from the unconfirmed attacks on oil tankers in the strait - there have been reports that President Trump had approved a retaliatory attack and then rescinded before the launch. It was confirmed however that the US performed cyberattacks on certain Iranian military and intelligence installations. The threat of outright war lingers dangerously in the air. The ramifications of such an action are severe even if the probabilities are still low. Using crude oil as a measure of this particular outlet of fundamental uncertainty is useful. 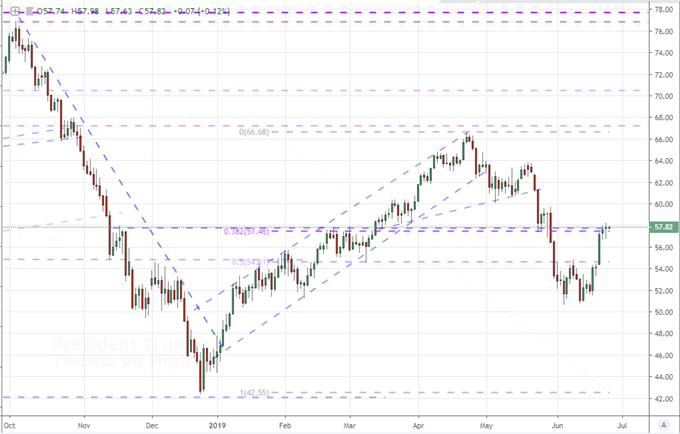 Keeping Tabs on the Kiwi Dollar, Swiss Franc and Gold

As we await fair winds on prevailing fundamental storms, there are still markets that can make meaningful swings without having to wait for full commitment. As far as timing goes, there are few assets more course set than the New Zealand Dollar. Tuesday evening / Wednesday morning, the Reserve Bank of New Zealand (RBNZ) is due to update its monetary policy. The group is expected to keep its benchmark rate unchanged at 1.50 percent with the market pricing in only a 20 percent probability of a cut at this gathering. That said, looking out to its November meeting (the furthest known with swaps for pricing), there is a 91 percent chance priced in for a cut. There is a sizable gap between now and for that accommodative shift to take root in rhetoric. Watch the Kiwi's response to the policy statement closely. 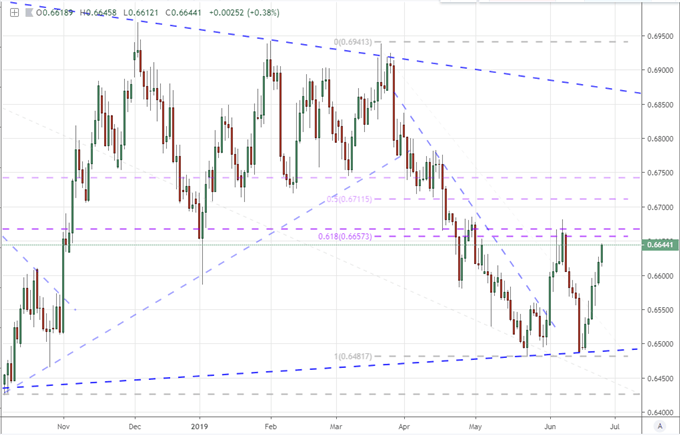 Another currency that is outside the orbits of the dominant fundamental themes that still offers promise of significant movement just without the convenience of a specific event risk is the Swiss Franc. It's steadfast appreciation is no doubt being closely monitored by the Swiss National Bank (SNB) - who has threatened to intervene on behalf of the exchange rate should the local denomination appreciate too rapidly. There is likely a cutoff point that the authority has in mind to start its intervention - or more likely its jawboning of a plan to that effect - but it isn't clear where that is. I wouldn't be surprised to learn we have already crossed that threshold. I am watching EURCHF as that it where the group is acting directly, but USDCHF is far more interesting in technical terms given the pace of its recent slide - particularly if the Dollar finally musters a relief rally. 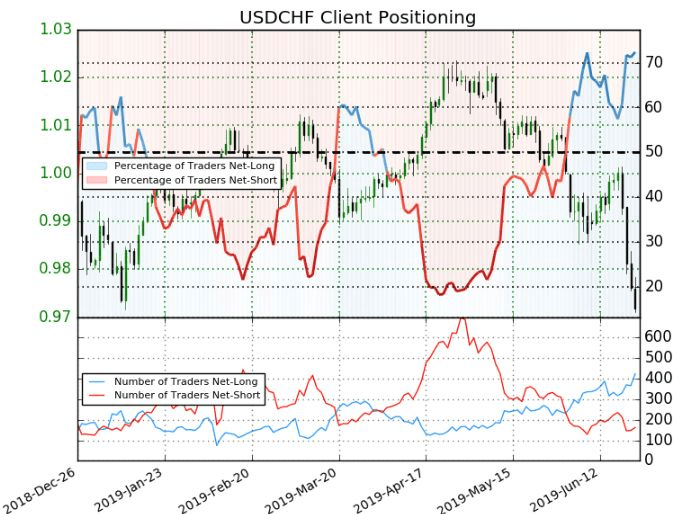 Another favorite market to watch as much for its reflection on the general state of the financial system as its own trading appeal is gold. The precious metal extended its run to a fifth day to encompass a nearly 6 percent rally. The market has already cleared out resistance on a 6-year congestion top (which could be argued to be a drawn-out inverse head-and-shoulders) and each subsequent level of resistance reached draws greater and greater scrutiny. There is much to glean from this technical picture with sheer intent to trade this particular market, but I like its measuring capabilities even more. Gold was a severe outlet for funds seeking shelter from the broad devaluation of sovereign assets like currencies and government debt that proved troublingly global - a condition that led to an epic rally between 2009 and 2011. We may be finding ourselves in a similar position now with central banks like the Fed turning dovish, and it would be quite the twist if we compounded the situation with general risk aversion.

Chart of Gold and 5-Day Rate of Change (Daily) 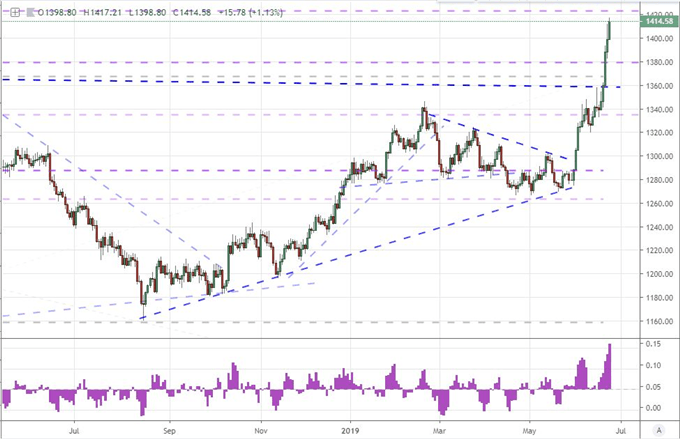