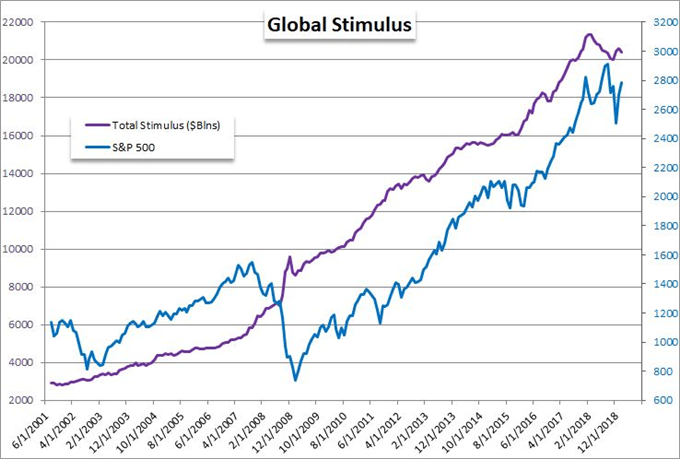 Will Monetary Policy Continue to Drive Markets Next Week?

Following my number one rule for fundamental analysis - determining what is the most pressing motivation for the largest swath of the market - I'm left with the sense that we will see the speculative gears retooled over the coming week. We are passing out of a week in which it was explicitly clear that monetary policy was the principle driver for the FX and capital markets alike. If it weren't for the Federal Reserve's rate decision and forecasts, the markets may have struggled for any kind of significant movement in benchmark assets. What is particularly unusual about the charge for the likes of the S&P 500 (which pushed a record high) is the consideration that the US central bank was not even that aggressive in its actual views and the markets paid far less attention to more overt commitments made by other groups. As a driver of speculative interests, traders should be mindful of hanging their expectations on the shoulders of groups like the FOMC. There are far fewer scheduled updates expected on the systemic aspect of the topic next week, but there will also likely be intense interest in the many Fed officials’ speeches scheduled - anchored by Powell's address.

While event risk ('catalysts') are fleeting, there is good reason to believe that a particularly important docket item in the week ahead will stir systemic interest in a frequent driver for the financial markets: the G-20 summit. The two-day meeting in previous years has had few critical points to touch upon for which markets actually cared. Nowadays, this meeting will act as a definitive progress report on numerous global issues. Trouble over the tempered pace of global growth and the tension between the US and Iran will certainly be important items, but it is trade wars which will draw the closest scrutiny for updates. In the past few months, the tension increased dramatically and then it has seemingly eased sharply just these past few weeks. We have seen a list of threats made by the US against Europe fade and a USMCA deal is no longer being held up by the threat of a 5 percent tax on all Mexican imports levied by the Trump administration for a week. The real interest is in the relationship between the US and China. There is still the open threat made by the White House to expand its 25 percent tariff on Chinese goods to encompass all of the country's shipments is progress is not made. Yet, the language on both sides has recently thawed. That said, businesses are signaling they are accumulating pain and the US added 5 new countries to its 'entity' list just on Friday. There is a lot of deserved uncertainty here.

Chart of Huawei Overlaid with USDCNH in Red (Daily) 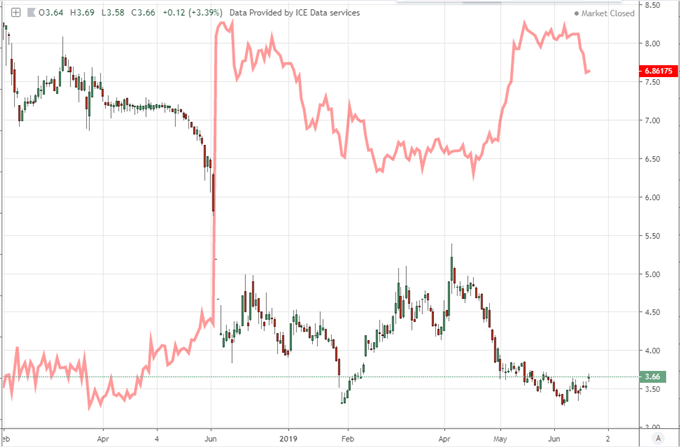 Ultimately, the fundamental jumps we have received from a dovish turn in monetary policy and fostered hope that trade wars are soon to end represent only transient boosts to enthusiasm. To permanently close the yawning gap between the level of risk taking and the tangible value to be found in the open market, we need to restore a reliable foundation for economic expansion. Through the past week, we were met with a number of downgrades in forecasted activity through entities like central banks and data reinforced a faltering trajectory. The June PMIs released on Friday showed Japan manufacturing further slowed and the United States' own factory activity hit its slowest pace of expansion in nearly 10 years. The Euro-area measures offered a measure of improvement over the previous month, but these figures alone aren't changing the potential of the global economy. 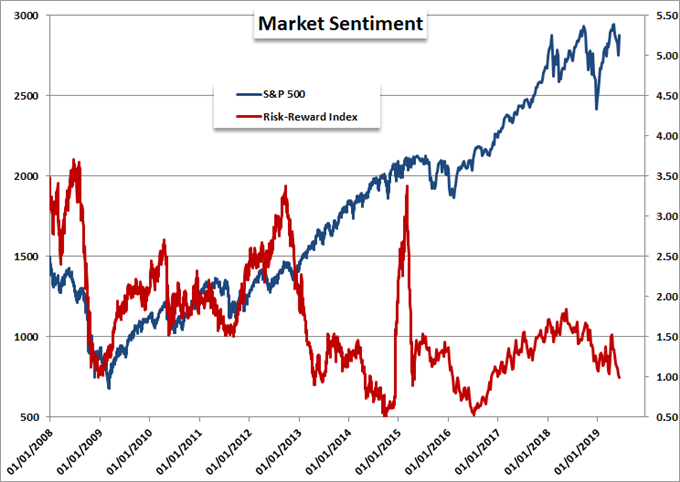 The Speculative Intensity Behind the Dollar and US Indices

If we are looking for a definitive barometer as to which critical theme is at the helm of market trends, there is unfortunately no consistently reliable measure for which we can rely. That said, there are certain assets that can better represent the specific measures that we have recently struggled with. The Dollar is arguably at the center of all the major fundamental concerns. In monetary policy terms, the Fed's weight is even greater now than it has been in the past decade thanks to its effort to normalize while others trailed far behind. In the meantime, the US is the instigator for the vast majority of trades wars currently ongoing, and it is unclear as to what scenario could actually confer benefit to the currency moving forward. The state of economic expansion is frequently judged on a global basis through a singular review of the US itself. At is this crossroads that makes the bearing of the Greenback so remarkable.

A dominant theme or rare convergence of outcomes between them can drive the USD higher or lower. As it happens, this past week's tumble represents the worst week's performance since February 2018. That swell in activity was likely necessary to finally drive the DXY through 13-month channel support and the 200-day moving average. While the benchmark currency is facing a potentially critical break, it is still an uphill battle to overcome the shackles that have restricted this benchmark to its smallest 60-day historical range (as a percentage of price) on record. 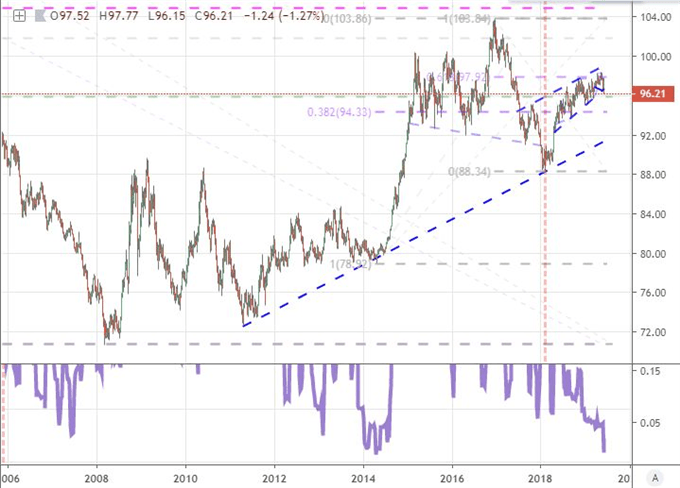 Where the US currency is a more balanced measure of bullish or bearish developments on these critical themes, the S&P 500, Dow and US indices are dramatically skewed. This particular segment of the financial system has reflected a clear bias towards favorable developments. That appetite has created a clear outperformance relative to global equities, emerging markets, yields and other traditional measures. Yet, the extent of that disparity is hard to fully appreciate until we hit key milestones as we did this past week. The S&P 500 rose to a record high on a close basis Thursday and an intraday measure through Friday. This seems to be a response to the combined influence of a market certain of impending Fed rate cuts and anticipation of a trade resolution between the two largest economies next week. These outcomes are far from certain; but far more troubling is the consideration as to whether these scenarios would genuinely confer the kind of benefit that seems to be assumed. 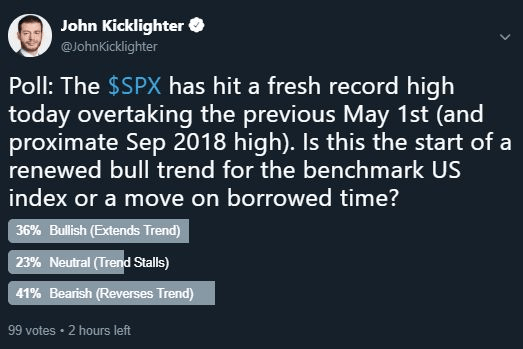 While the benchmark currency and preferred asset in global portfolios are good filters for sentiment, my favorite skewed lens for our particular conditions remains gold. The precious metal mounted an incredible four-day charge to round out the single best week's rally for the market since April 2016. In the process of this charge, the commodity took out resistance on a six-year long congestion resistance. What was the source of this run? While some may put the responsibility solely on the Dollar's slide, the true scale of the move reflects on the broad devaluation of traditional currencies as the world's largest central banks have collective reversed course back into an overt dovish perspective. While EURUSD will rise or fall as the title of 'least aggressive dove' changes hands, from a perspective outside of their relative influence, we are seeing a universal depreciation of currency that leaves few viable options aside from gold. If we were to add risk aversion to this mix, it would likely hasten the return to 2011's record highs. 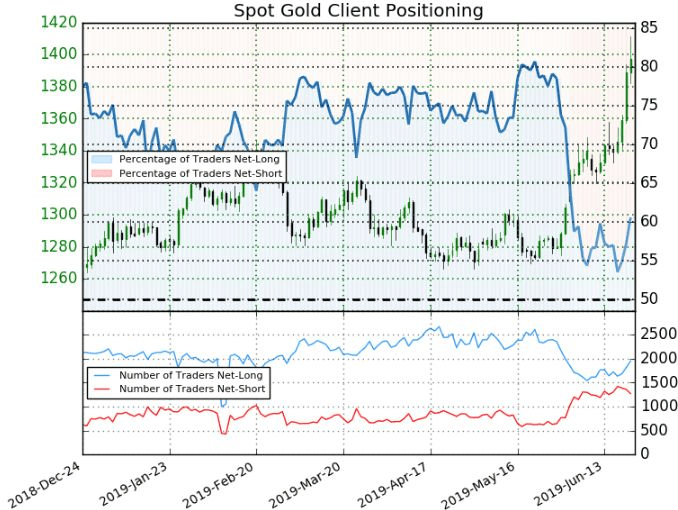 Another commodity that draws different explanations for influence but which reflects a more systemic issue is crude oil. While most superficial evaluations of the market consistently refer to regular inventory figures (good sometimes for volatility but not trend), the more consistent motivator has been affixed to demand. Global growth has clearly flagged and addition of risk aversion over previous weeks had painted a more effective picture. Now, with the Dow and peers jumping, the picture is once again blurred. Yet, as it happens, I believe that supply is temporarily back in the driver's seat. The news this past week that Iran had shot down a US drone started the distant rumblings of another war for the world's largest military. Skepticism naturally follows this concern given the nation's wariness for further military engagements, but reports that the US was on the verge of launching a retaliatory attack but stopped it at the last minute raises serious concerns about the probabilities around this threat of a 'hot war'. 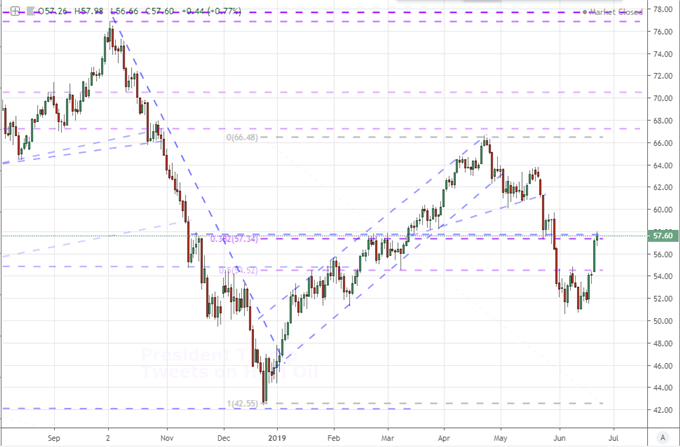 While there is considerable traction that can be found through those assets that represent systemic themes, it is not particularly easy to get the momentum rolling on the fundamental engines. That naturally makes the trades based on these fluctuating winds just as precarious. As such, we should consider the more measured opportunities to be found in particular areas of the market. Looking at the docket ahead of us, the New Zealand Dollar represents a considerable potential for volatility. The RBNZ (Reserve Bank of New Zealand) is not expected to cut rates at the meeting (join us as we cover it live) when we refer to swaps markets, but that in itself is a meaningful development when we consider the Fed is seen as potentially cutting three times according to futures estimates. I will be evaluating the Kiwi crosses a little more closely next week. Then there is the Swiss Franc. While the currency didn't extend its run at the same tempo Friday, EURCHF was still lingering below critical support seemingly defended over the past few years. The SNB (Swiss National Bank) has stated clearly that they were monitoring the currency and stood ready to intervene should it appreciate too far and/or fast. While it is not clear where their pressure point is, I would not be surprised to learn we have already passed it. We discuss all of this and more in this weekend Trading Video. 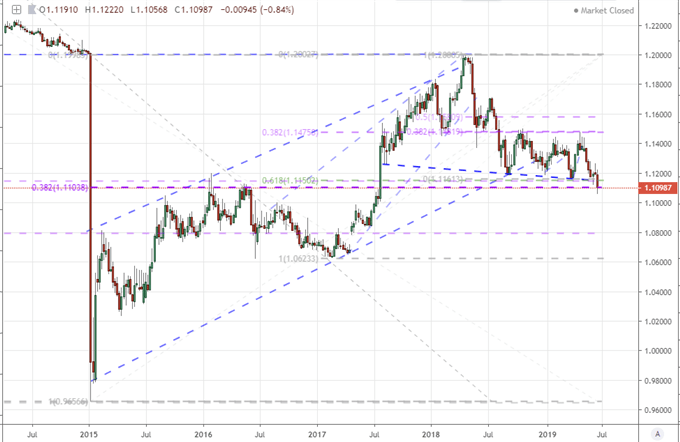