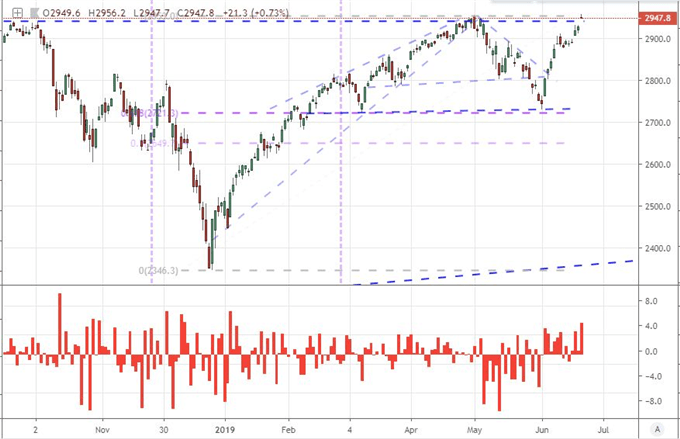 There is a speculative fever still running its course through the markets following the dovish interpretation of the Fed's actions and views Wednesday. For US indices, enthusiasm built overnight to produce the biggest bullish gap on the open for the S&P 500 since January 4th - the surge that secured the impressive first quarter recovery. It is naturally tempting for committed bulls to draw further comparison to the move at the beginning of the year considering the run it ultimately fostered. While traders should participate when they assess well thought out opportunities, it is important to evaluate the circumstances thoroughly. When any liquid asset it at an extreme - record highs clearly qualifying - the need for more robust sources of conviction deepens. A momentum born of speculative appetite alone can provide temporary fuel, but the Nasdaq and Dow haven't supported the sense of critical mass. Further, the other familiar risk assets are not are not issuing the same sense of conviction as the world's most popular trader benchmark.

Looking to other risk assets, we can start to work out where the enthusiasm is centered. Within US equities, this cycle's outperforming sector (techs) is flagging the baseline. While a broader demand in risk appetite is healthier, the flagging of the regular leader should raise some initial flags. Looking around to other global indices, a genuine conviction in speculative opportunity would see the deeper discount for most other regions leverage larger rallies across the board. That was clearly not the case whether the reference point was the VEU 'rest of world' ETF or a global benchmark like the DAX. Meanwhile, the intensity of the emerging market's rally (EEM ETF) signals a particular commonality to fuel interests: assets that are closer to the influence of US monetary policy. 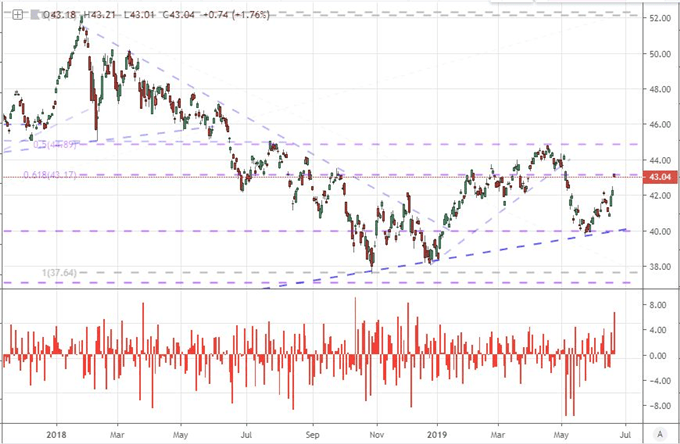 If we consult those risk assets that add a further emphasis on growth, the breadth of the divergence becomes even more exceptional. Commodities have shown little of the general confidence that a windfall of enthusiasm is underway. One of my favorite measures of both speculation (risk appetite) and value (growth potential) is the state of global government bond yields. While it makes sense that this measure is driving to multi-year lows with the world's largest central banks signaling a readiness - if not intent - to offer greater accommodation. Yet, such support follows concern over economic activity and financial concern, while its pursuit will also lower the realistic rate of return in the open market. A deviation between these two is not a favorable signal of long-term dependable market growth. Another troubling signal comes from gold. While this is a traditional safe haven, its typical alignment is a telling signal. The fact that the precious metal charged higher with its biggest single-day rally since October to extend the best week in three years and tentatively break resistance on a six-year congestion pattern signals something very unorthodox.

Chart of Gold and 1-Week Rate of Change (Weekly) 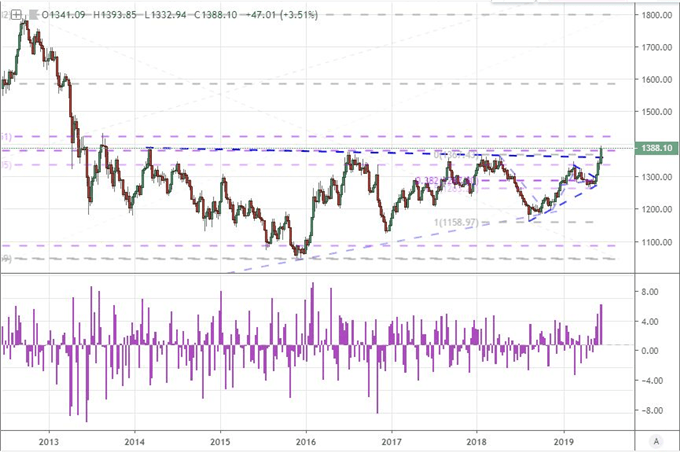 If you are looking to establish whether a prevailing bull trend has a greater probability of forging ahead or is at risk of reversing course, it is best to look for reliable sources of motivation. At present, there is little mistaking the focus on monetary policy. Despite the Federal Reserve's forecast for no changes to monetary policy this year, the market took its more subtle lingual cues to reinforce expectations of hearty cuts to the benchmark range this year. That builds upon the accommodation tide that started earlier in the week for the European Central Bank through its President's stated readiness to restart the rate cut and stimulus regime if economic conditions ground to a further halt. This past session, the Bank of England (BOE) and Bank of Japan (BOJ) didn't make any unusual and sweeping changes to their vows - much less change their current policy mix - but it was another thrust to a cumulative dovish perspective. The true concern is not these groups' willingness to respond to fresh crisis, rather it is whether they can genuinely prevent further fallout. 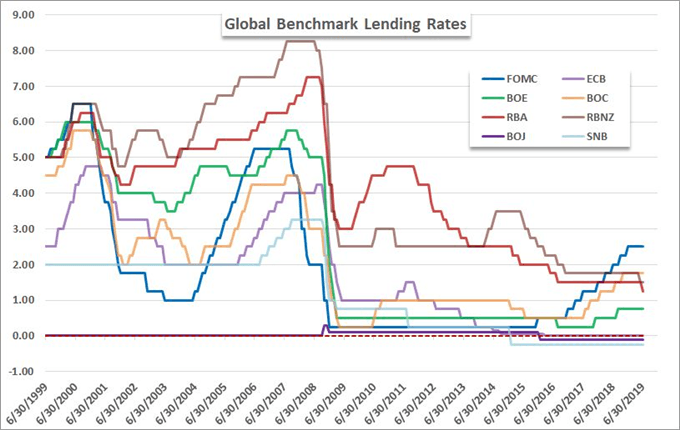 Another possible positive outlet that optimists may be proactively seeking out is a more favorable turn in trade relations than what we are presently registering. Canadian Prime Minister Trudeau was in Washington to discuss the USCMA (among other things), and general support for the NAFTA replacement seems to be aligning. This may signal the end to one of the more short-lived barriers to global growth. The more costly economic fight has been between the United States and China. This past session, a Chinese media outlet that has close ties to the government offered an editorial insight suggesting the country is ready to find a resolution. Paired with President Trump's eased tone this past week that he believes a deal can be reached at the G20 summit next week - whether President Xi is there in person or not - it seems like there is a subtle courtship for resolution in the works. It should be said that resolving this standoff would offer significant relief but it won't be a true motivation for growth, simply the resolution of painful restraint.

Chart of USDCNH and 1-Day Rate of Change (Daily) 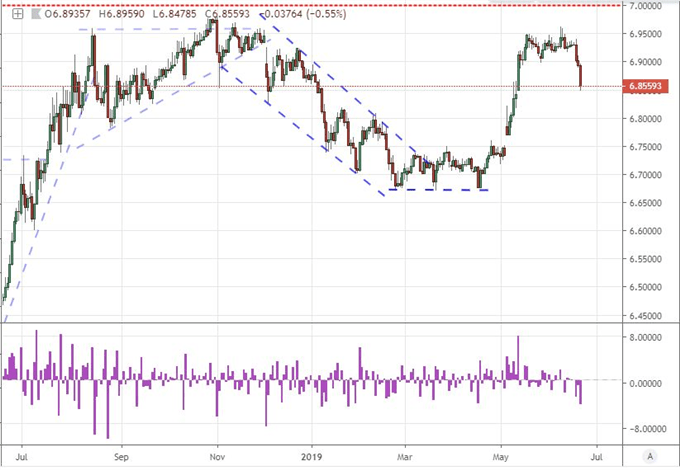 Where monetary policy is burning through its unquestionable good will and uneven trade wars potential is being cast in a favorable light at the moment, there is unmistakable weight to be found through the state of economic activity and geopolitical relations. On the former front, most of the dovish updates from the major central banks accompanied soft or further lowered projections for output. Alleviating trade wars and pushing stimulus to its (limited) max, and we are still beyond the peak of potential for economic activity. With a round of June PMIs for Asia, Europe and the US due Friday, we will round out forecasts for 2Q activity readings.

It is easy to group crude's rally into the same general category as 'risk on' assets like equities and emerging markets. It has speculative properties like many other tangible investments. However, the disparity in oil's performance to that of general commodity measures should signal that something is amiss. With the outlook for growth severely truncated, it is more likely that we are see a boost from this favorite commodity through more localized means. The news that Iran shot down a US drone certainly stirs to life the supply side discussion. There remains a dispute as to who was in the wrong in this action and the international community has not made a clear call. Nonetheless, WTI crude put in for its best day since December 26th and the charge through 54.50 carries some measure of technical relevance. 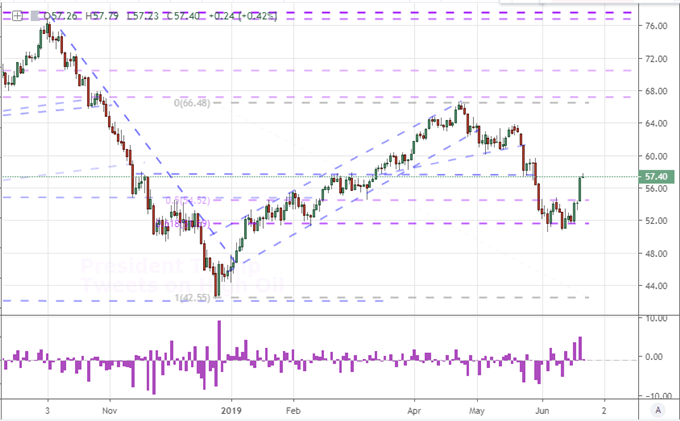 In the FX market, most of the ebb and flow can be traced back to systemic issues. However, there are certain exceptions with high-level event risk. This past session, there was a remarkable amount of provocation for the so-called 'comm bloc'. The Canadian Dollar responded to the news of the that Trudeau was in Washington DC to discuss trade. On the data side, however, the ADP private payrolls report gave reason for pause as a 16,000 net loss in jobs contrasted to the 24,000 positions added the previous month. From the New Zealand Dollar, the event risk was of a significantly higher order. The 1Q GDP is a late addition to the developed world's economic assessment, but the better-than-expected report (2.5 percent annual growth versus 2.3 percent expected) was a rare ray of light for a battered currency. Then there was the Australian Dollar. There was only modest event risk on tap this past session, but RBA Governor Lowe's remarks played to a fragile market such that anticipation of a July follow up rate cut jumped from a 50/50 evaluation to an approximate 70 percent chance. 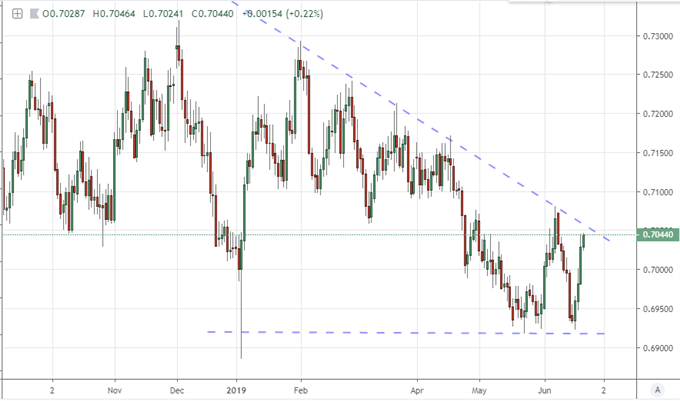 An outlier in the FX market that traders should pay closer attention to is the Swiss Franc. The single currency surged this past session to clear major resistance. Whether this is a swell that reflect optimism for Switzerland's cooperation with the EU, a watering down of its extreme dovish policy or a basic appeal for its safe haven properties, the currency was clearly under a strong bid. In the pursuing move, EURCHF readily cleared overlapping support around 1.1150 to trade at two-year lows. While the Swiss National Bank (SNB) has not laid explicit plans to prevent any crippling appreciation of its currency, it has made clear it was ready to respond. There is a very good probability that we have moved into intervention territory so watch this particular exchange rate and the Franc crosses in general going forward. We discuss all of this and more in today's Trading Video. 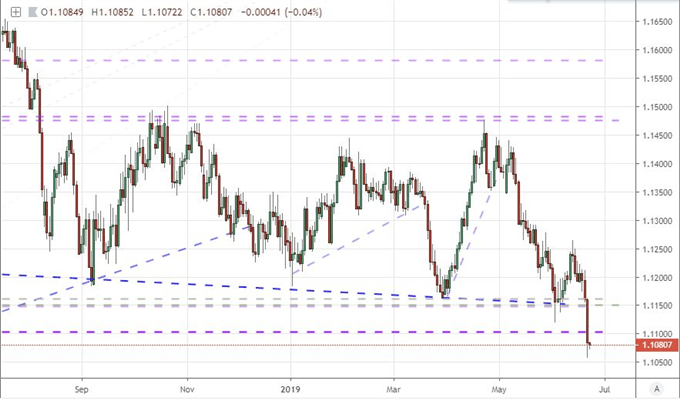