•The Federal Reserve held rates as expected, but what was wholly unexpected was their forecast projecting now cuts at all in 2019

•Despite the central bank's neutral forecast, the market's certainty of forthcoming cuts only intensified

Do you trade on fundamental themes or event risk? See what live events we will cover on DailyFX ahead (such as today’s BOE rate decision) as well as our regular webinar series meant to help you hone your trading.

The Fed Gets Its Cake and Eats It Too

This week's top scheduled event risk didn't disappoint for fundamental shock. However, the market's response to the unexpected outcome from the Fed rate decision was arguably more surprising than the group's evaluation itself. Given that this was one of the 'quarterly' policy meetings for the Federal Open Market Committee (FOMC), there was the standard opportunity to alter policy with a brief statement that would accompany the outcome along with Chairman Powell's press conference and the group's updated forecasts. The rate decision itself crossed the wires as expected with no change to the 2.25-2.50 range. Further, the removal of a closely followed operative word 'patience' interpreted to be a high level of inertia and the remarks that would "act as appropriate" seemed to carry a light air of dovish surrender to the market's demands. However, the more actional elements to the event were notably askew of baseline expectation. Despite some domestic and external winds, the policy authority nudged up growth forecasts and ticked lower the unemployment outlook. The real surprise however was the forecast for rate cuts. There weren't any for 2019. 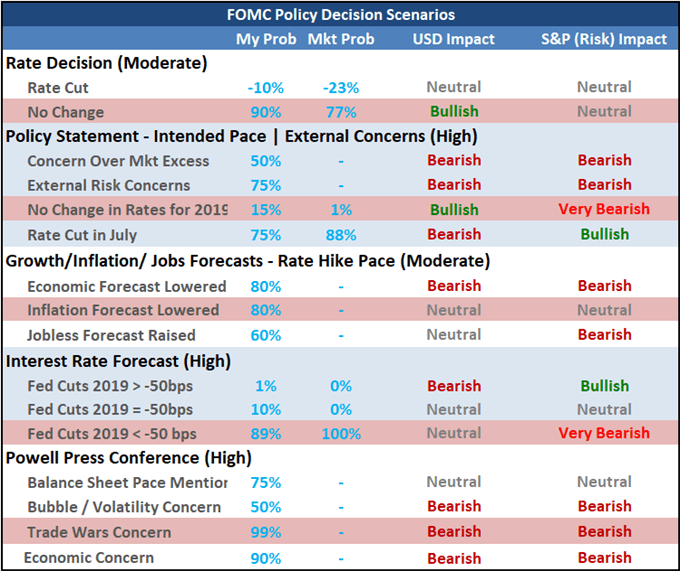 Heading into this past policy meeting, there was a noticeable pricing (24 percent probability) for a possible preemptive 25 basis points (bp) rate cut. The central bank was unlikely to fulfill that high-level speculation as it could inadvertently trigger the market's fear, a sign that the economy and/or financial system were in so troubled a position that it required support now. The consensus, however, was still for no change this month, so market participants were thrown. That same lackadaisical response was afforded to an extreme disparity between officials projecting no change versus a market that was debating two or three full cuts (50-75) through year's end. A textbook market interpretation for such a position from the Fed would normally charge a rally for the Greenback while cutting risk assets like the S&P and Dow. Instead, the Dollar continued to slide while equities and emerging markets slowly advanced. 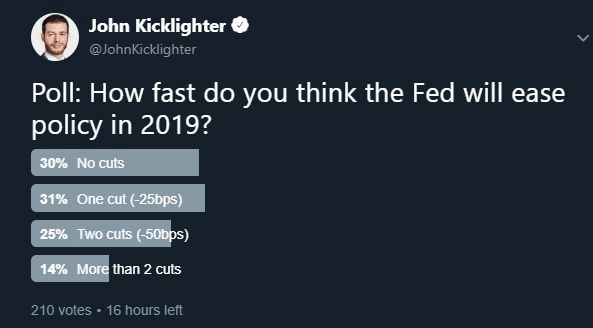 This unexpected market response is not a systemic reinterpretation of the way monetary policy influences the markets, rather it is evidence of a deepening skepticism over the Fed's forward guidance. While the median forecast among members for interest rates from the central bank was for rates to hold at an average 2.375 percent through year's end, the breakdown of votes (the 'blue dots') showed that eight members expected easing before year's end, seven of which projected 50bps of cuts. A few economic disappointments or market slump could easily tip this balance. That caveat accounted for, the market is still far more aggressive in its views. The market's certainty of a cut next month intensified to a 100 percent chance according to Fed Funds futures, with a hearty percentage probability of a 50bp move. Through year's end, the market raised its pricing of ~54 bps worth of cuts to ~72 bps. This could be readily interpreted as the market's fear of an economic and/or financial downturn. 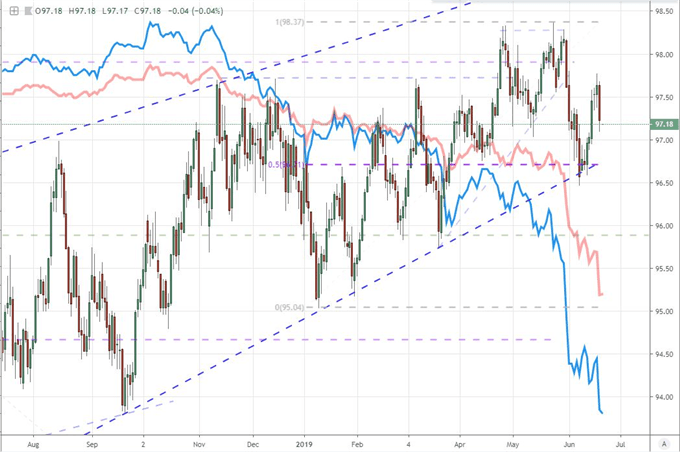 Trade Wars and Politics are Still Critical Themes to Monitor

Monetary policy is not solely dependent on a single group - though the Fed holds far more influence than all of its peers. What makes the US central bank's restraint from the accommodative policy siren call is the fact that its largest counterparts are caving to the dovish cries. Earlier this week, European Central Bank (ECB) President Mario Draghi remarked in an event his group hosted that they were ready to cut rates further and revive their stimulus drive should conditions warrant. The Euro responded abruptly with a tumble Tuesday. That charged response only makes the EURUSD's reticence to the Fed's update all the more unusual. EURUSD bounced with little reticence from 1.1175. While individual central banks can leverage short-term opportunity or disadvantage for their respective currencies and assets, it is far more important to watch the underlying mix of policy relative to the health of economic activity and speculative appetite. The Fed's confidence is the exception. Fear is rising steadily across the world that external risks like trade wars can knock global growth off its recovery course. 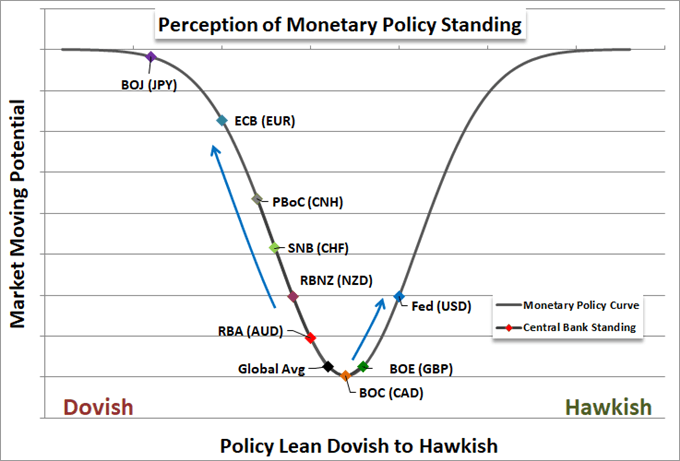 Speaking of trade wars, we are still finding vital updates on this theme; and all it takes is a strategically-placed headline on the topic to send the markets flying or collapsing (depending on the news). Earlier, the White House announced that a meeting was in fact scheduled for Presidents Trump and Xi to meet at the G20 summit next week. At the same time, US Trade Representative Steve Lighthizer testified that the two countries (US and China) were talking once again and that their counterpart's rescinding retaliatory tariffs and an increase in purchase of US goods was a critical requirement to a deal. In the meantime, there were reports that CEOs of five major US firms were meeting with the Chinese Vice Premier, Apple was considering moving up to 30 percent of its supply chain out of China and that US Steel had idled blast furnaces at two of its plants. That last update was particularly concerning as metals tariffs were the first move of the trade war last year, and suggests the trade war effort doesn't just cause pain, its intended benefits seem to also be losing traffic. That said, the Mexican Senate overwhelmingly approve the USMCA. Small victories. 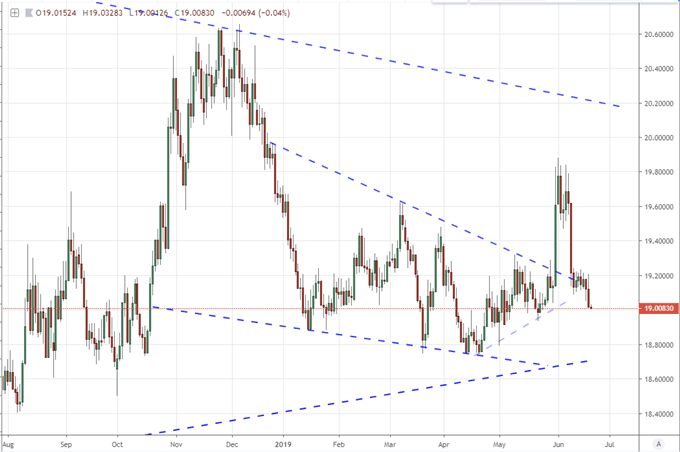 Economic activity and political winds are other critical themes that continue to kick up. For fears of recession, we still have the mix of data that has set Europe on edge and encouraged temporary reprieve for the US outlook. With trade wars and monetary policy taking center stage, we should cautiously watch for unintended sparks and the amplification that such matters can represent. In the meantime, politics is a disused trouble that seems to be returning to form. The standoff between Italy and the EU is set to heat up again through the end of this week with the EU Summit on tap. In the UK, the uncertainty of leadership seems to slowly be winding to favor for Boris Johnson. Meanwhile, the US may be looking at a crack in the cloud cover with the US Treasury Secretary, Steve Mnuchin, remarking that the President intends to keep the US government open and could raise the budget ceiling if a deal is not found. 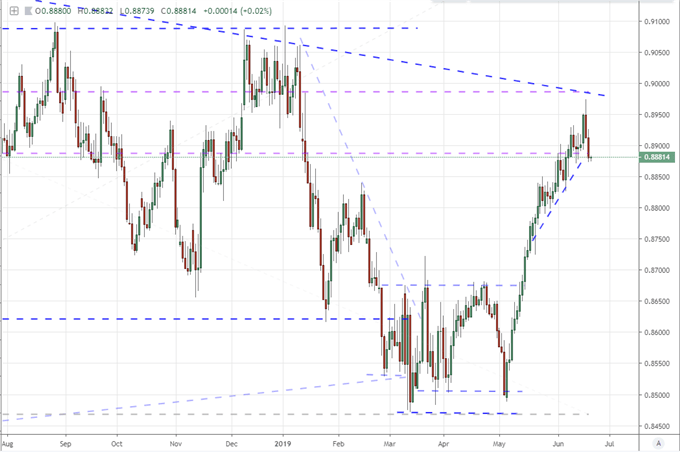 As we move into these final 48 hours of trade this week, there is still great risk and potential in the general themes. That said, there are certain concentrated pockets of event risk that can leverage specific volatility in certain currencies and assets. For sheer potential, the British Pound is arguably the most potent docket to pick through - though that does not guarantee clear activity, much less trend. This past session an equally weighted Sterling index posted its biggest single-day jump since May 3rd. This likely has little to do with monetary policy intent from the Bank of England (BOE). Keep that in mind as the central bank is due to update its policy direction later today. For what it's worth, Governor Carney's annual Mansion House speech will be meaningful; but it too will lack for the fundamental insight for which global investors are looking. The real interest is in the ultimate outcome for the Brexit negotiations. A return to earnest discussion between the UK and EU may be sooner at hand as the Conservative leadership race sheds candidates as Boris Johnson seems to maintain his majority. While his influence and direction are unclear for long-term impact, even a measure of direction can offer the Sterling a relief lift. 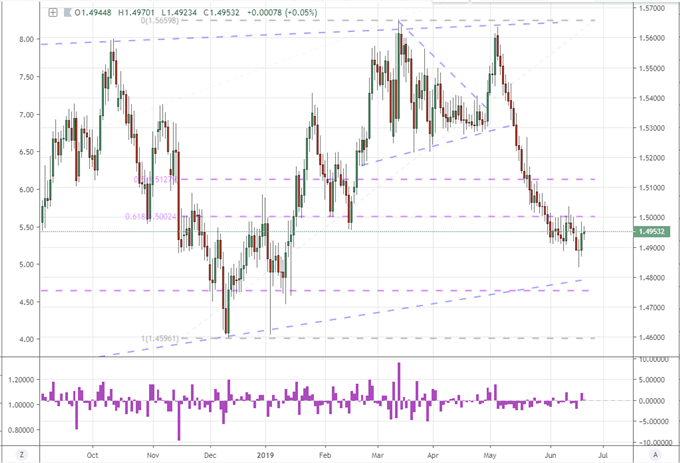 Another rate decision due Thursday with questionable market impact is the Bank of Japan's (BOJ) meeting. Contender for the world's most dovish major central bank, there is little chance that the group will either accelerate their support or ease up. The latter would invite speculative rebalancing which can disadvantage the Yen while the former would expose the groups lack of ultimate influence over markets and economic health. A loss of credibility is a death knell for a central bank. I will look to risk trends for guidance on the Yen. That said, don't underestimate the collective impact that a universal dovish policy course can have on global monetary policy and the growth that relies upon it.

For more discreet market impact outside the themes, industrious FX traders should keep tabs on the Canadian and New Zealand Dollars. For the 'Loonie', inflation data this past session hit the wires unexpectedly fast - quite the contrast on a Fed decision day. Ahead, Canadian PM Trudeau is expected to visit the White House to discuss USCMA among other things while the ADP private payrolls will offer another dose of employment volatility. For the Kiwi Dollar, the 1Q current account balance report will meet its complement in GDP. Volatility often follows these reports, but trend is less reliable. And, if all else fails, traders should keep tabs on the ultimate indicator of market health: gold. While usually considered a safe haven, its real appeal is as a gauge for how hard the winds of financial instability, global economic struggle and monetary policy inefficacy are blowing. With Wednesday's close, the metal is trading at a multi-year high and provocatively close to a high-level technical breakout. We discuss all of this and more in today's Trading Video. 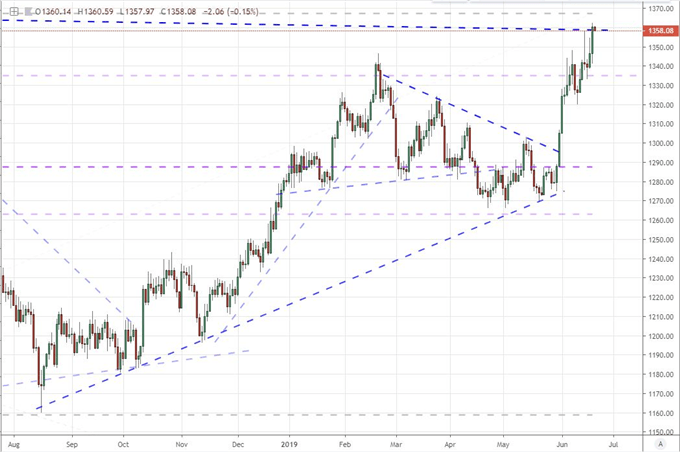