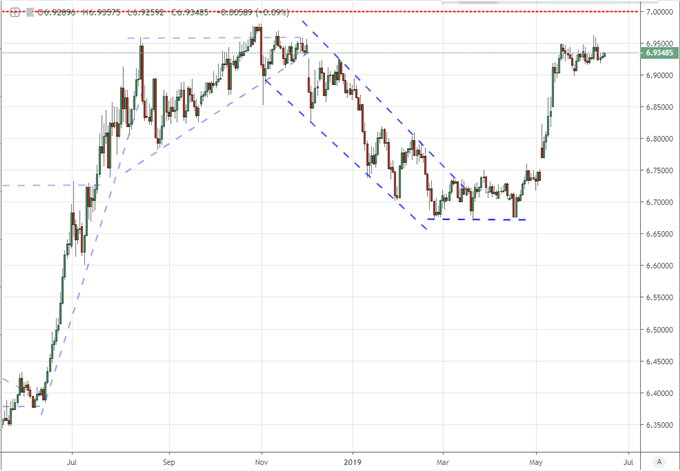 Will EURUSD Draw Some of the Trade War Winds from the Dow?

There are a handful of systemic risks that have kept command over headlines and the performance of speculative markets these past months, and another eclipse of the conversation by trade wars should surprise no one. There was no material update to the mix of economy-restricting measures between the world's two largest economies this past session. The US maintains a 25 percent tariff on $200 billion in Chinese imports alongside its Huawei ban - with the explicit threat that the net of goods subject to tax could expand to another $300 billion in goods to encompass the entirety of the country's trade if the G-20 meeting on June 28-29 does not end satisfactorily for the US. On the other side of the skirmish line, China has $60 billion in US products facing the same tax rate while it holds out more opaque threats to use rare earth materials as ammunition and has said it is building its own blacklist of US tech companies. USDCNH is a good reflection of the mood between the two, but the exchange rate is just as distorted as the perspective.

While we have seen a recent freeze in the escalation of actions between the United States and China, that does not mean that the aggregate impact from the economic sanctions thus far have been unremarkable. Far from it. While not every indicator that crosses the wires these past months has registered escalating damage to the global economy, the hits are more frequent and more costly. This is where the lowered GDP and PMI figures comes into play. We don't have those more targeted readings this week, but the Japanese 2Q Business Sentient Index and Business Round Table CEO forecast survey released recently speak to fear of struggle and intent to throttle business - a direct economic curb. More interesting this past session, there were a few key groups listing trade wars as the top risk - including the IMF and Swiss National Bank. However, the most remarkable warning came from a letter to the White House sent by a group of over 600 US corporations and trade associations which made explicit that trade wars were a burden to the US economy and called on President Trump to find an end to the economic fight. Given that the President recently said that he was holding up the US-China deal and made confusing threats to resuscitate the Mexico tariff, hope for relief may be misplaced. 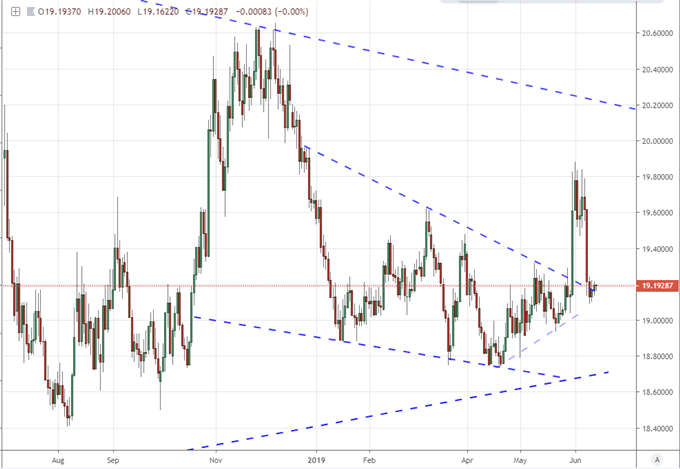 EURUSD is already the most liquid currency pair in the FX market - and is in turn a candidate for the most liquid asset in the financial system - but it is also increasingly an important crossroad for many of the most important fundamental themes facing the markets today. Reports crossed the wires Thursday that President Trump was considering yet another trade war move on Europe. According to the news, the Administration was considering sanctions against Germany - the Euro-area's largest economic member - for its long-in-development Nord Stream 2 natural gas line with Russia. Trump has grown more comfortable using the unilateral economic axe, but we have seen similar threats recently that have yet to yield action. Against the Euro, the most prominent ultimatums from Washington were the possibility of a hefty tariff on all auto imports (a decision delayed out to end of October), a more than $11 billion tax meant as retaliation for Airbus subsidies and a lose reprisal for Harley-Davidson's flagging revenues. It is difficult to weigh the practical risk between a number of unfulfilled threats and the Trump administration's willingness to act. Don't right off the risk.

Chart of EURUSD and CNHUSD (Daily) 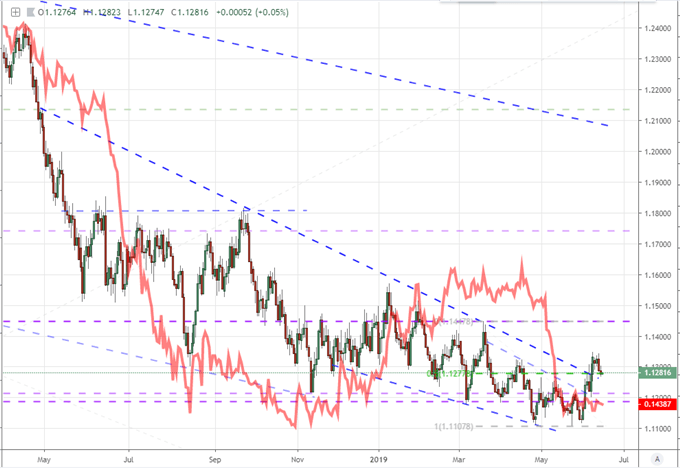 If you are watching EURUSD, we can't simply afford to monitor the unexpected risks. There are plenty of practical fundamental winds that are already blowing in the FX market. On the Dollar's side, there is in fact an excess of important themes to compete for control over market bearing. The misplaced strength afforded to a currency behind the genesis of trade wars has transitioned into a liability for the state of uncertainty it creates. Growth is another undercurrent that bodes poorly for the US currency. Friday's offering of the consumer confidence survey (University of Michigan) and retail sales will reflect on that theme directly. Monetary policy is perhaps the most loaded of the systemic themes, but we are clearly in a holding pattern until the FOMC rate decision next Wednesday. Anticipation won't quiet speculative tides however. Dovish expectations through September and December have surged to fresh extremes through this past session. 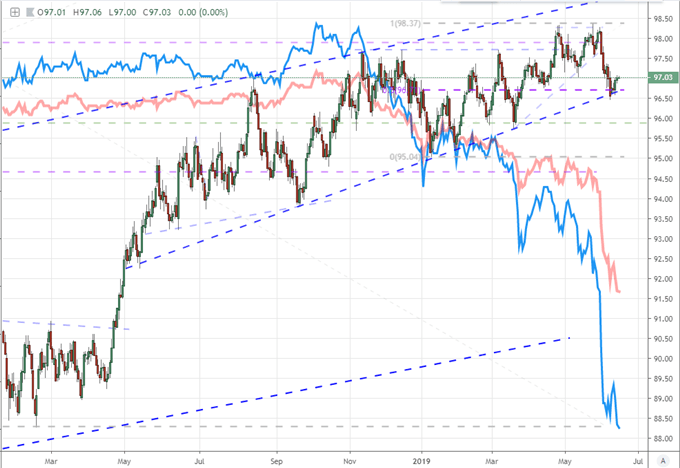 The Dollar isn't the only currency with its own fundamental influence to exert. For the Euro's part, trade wars and economic health are critical influences to keep track of. That said, domestic issues arising from the European Central Bank's (ECB) policy intent and fissures in financial policy stability are the type of systemic development that could fundamentally alter the standing of the world's second most liquid currency. ECB President Draghi has been surprisingly vocal for a central banker due to step down in a matter of months, but that seems necessary given the state of affairs in the market. The tension generated from Italy on the other hand is far from reasonable pressure. The Eurozone finance ministers would not let up on the profligate member, but it is unclear what ultimatums will be put into place - whether a year-long allowance like they offered in December or a 3 billion euro fine which was floated recently. What is important here for FX traders is the recognition that a tentative - but concerted - effort by Italy to withdrawal from Euro use could send shockwaves through the financial system (casting a shadow over the second most liquid currency can do that). 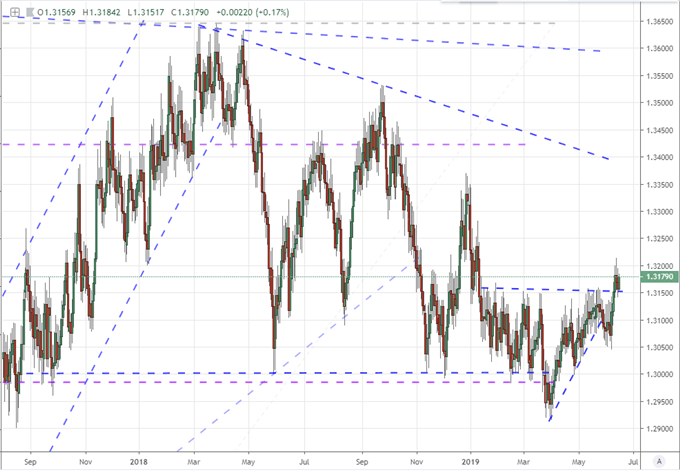 If you're looking for fundamentally-driven market moves outside of the systemic themes, there are a few assets of particular interest to monitor. In the FX market, the Australian Dollar can certainly draw significant market-moving lines to the trade wars that impact China. That can prove an interesting caveat to price action as AUDUSD doesn't have the artificial cap that USDCNH faces (7.0000). Furthermore, event risk like the consumer inflation expectations and employment statistics update are good for volatility and an economic course correction if monetary policy and economic anticipation align. As for the Swiss Franc, the connection is usually its reflection of the more liquid Euro. That said, the Swiss National Bank (SNB) is committed to matching - and exceeding - the ECB's efforts. Whether or not they are successful is a separate matter. 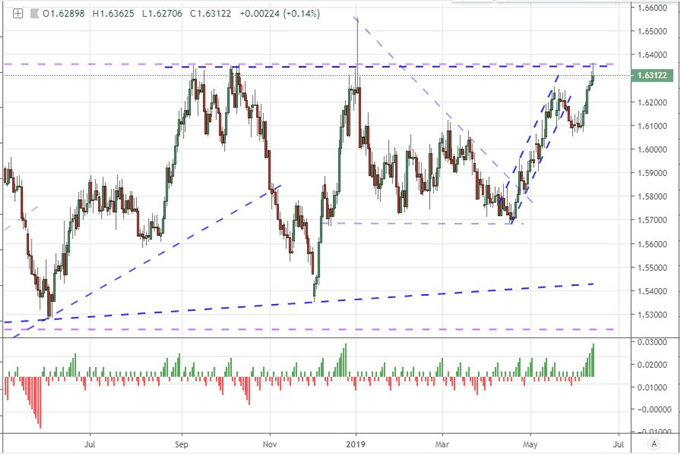 For those assets that play a dual role as both a risk metric as well as economic metronome, there are few more appropriate pace setters than crude oil. The commodity experienced a jump Thursday that finally found enough supply-side influence to roused bulls to make a serious support of the 51.50 level. OPEC reported that its output dropped 236,000 barrels per day (bpd) this past month to drop to a five year low 29.88 mln bpd. Perhaps if they didn't also downgrade demand projections by 1.14 mln bpd, this would have prompted a bigger market move. The real flux on the day Thursday were the reports that two commercial oil tankers had been attacked in the Straight of Hormuz. That said, demand is still my principle concern for trend generation behind this commodity, and the outlook for global growth is not exactly encouraging. 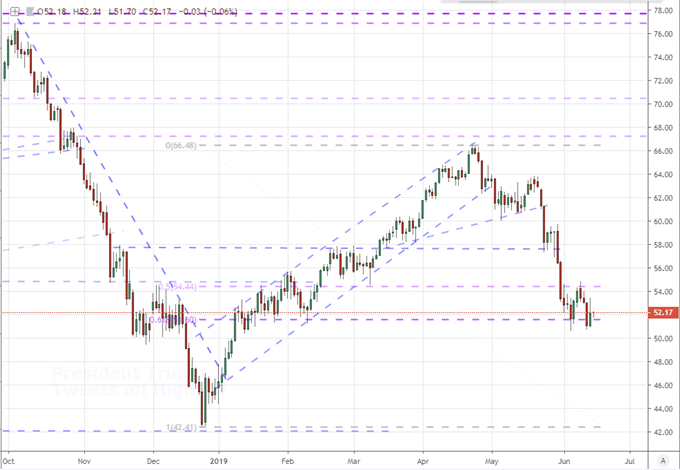 Gold is another commodity that offers fundamental insight that reaches beyond its own technical boarders and local headlines. The precious metal is still bound to the benchmark currency (the US Dollar), but both commodity and currency were heading higher this past session. The charge is found through a modest sense of risk aversion that is complicated by the questions over financial stability brought about by systemic issues like trade wars. We have seen the market return to its highest close since April of last year, but the real decisions are made when there is an earnest go at 1,360. If risk aversion intensifies and the the central banks attempt to mop up the mess - and especially if they fail in their endeavors - gold will find itself one of the very few outlets that can service global investors' needs for safety. 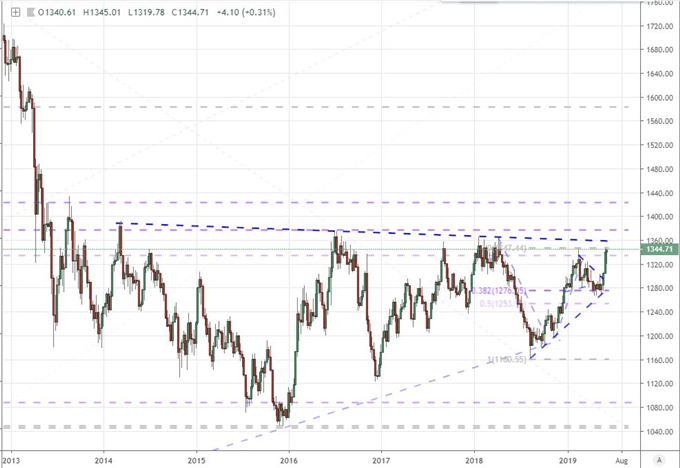