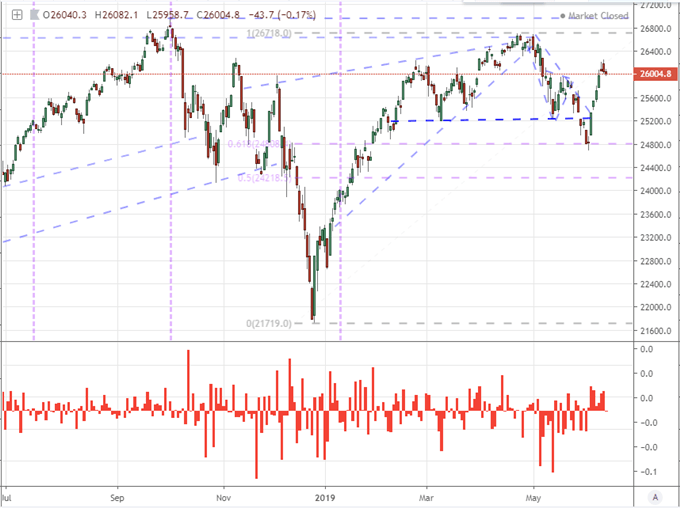 The benchmark US equity indices - my preferred and imperfect measures of speculative appetite - took another small but important step towards committing to a full-fledged trend reversal this past session. While neither the Dow nor S&P 500 registered prolific losses through Wednesday's session, the shift in baseline bias was apparent from the very start. The two notched their first bearish opening gap in seven trading days and six trading days respectively which builds on the first official bearish close since the June climb Tuesday - after an intraday course reversal. This course correction could simply prove a pause before reengaging bullish ambitions, it could simply stall out or it could trigger a technical avalanche. Which course we follow depends as much on the bullish performance that preceded these technical developments as the sparks that could actively foster risk aversion over the final 48 hours of trade this week.

Most technical traders are familiar with the distinction between a trend's reversal versus a temporary correction - in theory if not in practice. That same contrast exists through fundamental and general speculative positioning considerations as well. If the bullish, 'risk on' course that we've been set on since the beginning of this month was rooted in a reliable and progressive theme, the pause we are experiencing would likely steady before losing further altitude as we await the next headline or data release that reinforces the lift. Updates that work against the prevailing trend would need to build a head of steam between steady deterioration and/or severe outcomes if it would be expected to generate a lasting bearish course. In contrast, a rally that was founded on primarily temporary means - such as relief from a previously oppressive fundamental trend is more likely to stall out when the favorable headlines are spent. Such a scenario is more likely to unwind the previous trend even if the fundamental sparks dry up. I believe we are experiencing the latter scenario.

Of the major themes that have regularly driven the financial markets these past weeks and months, the most prominent for coverage has undoubtedly been the progress of trade wars. The news Friday evening that the US and Mexico had reached a deal to avert the former placing a 5 percent blanket tariff on the latter was clearly intended as a 'win' for both the complicated economic engagement as well as for the capital markets. Yet, the fear that has built up leading into impending escalations with the likes of the US-China conflict never seemed to follow this side venue. So, while there was some relief that it hadn't gone into effect, there wasn't much discount that would need to be covered by the subsequent announcement. That seemed to confound the White House as the customary warnings that followed the course correction seemed to draw more attention and confusion that the initial breakthrough. As for China, there have not even been initial signs of a thaw in the tense relationship. Trump's remarks Tuesday that he has held up the trade deal with the Asian giant ahead of the G-20 Summit at the end of the month produces more questions than answers. Uncertainty is risk and risk sends speculative appetite diving. 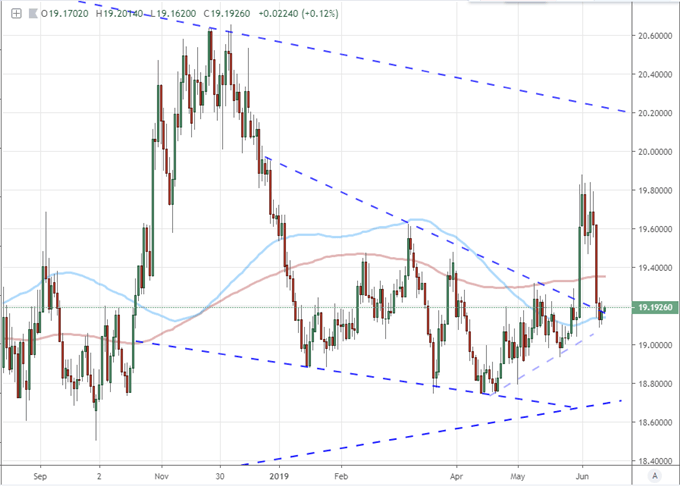 Though a less ubiquitous theme, designs for monetary policy to revive the glory days of speculative appetites reinforced by external support from exceptionally dovish institutions has clearly played a key role in the market rally of through June. It is not a coincidence that the charge from the S&P 500 - and drop from the Dollar - happens to align so distinctly with the sharp increase in expectations for rate cuts through July and end-of-year. Yet, with the Fed squarely in its two-week blackout period, there isn't much opportunity to further speculation of a dovish move from the largest central bank shifting subtely from September to July. Given the unmistakable correlation between the S&P 500's performance relative to rate expectations, a freeze from the most effective international policy maker represents an unmistakable drift for an important relief rally driver.

Chart of Dow and Expected Rate Cuts Through Sept in Red, Dec in Blue (Daily) 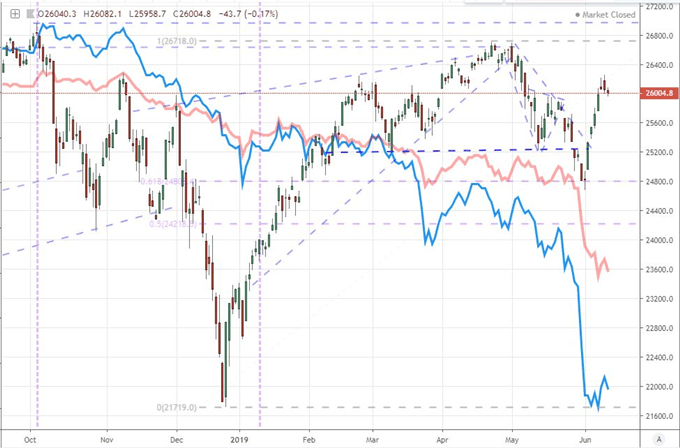 As the temporary props fade into the backdrop, the systemic issues are returning to trouble the forecast. Assessments of global growth are lacking for official figures like the quarterly government updates or the timely PMIs, but there are still certain measures that carry weight with market participants. This past session, a survey of CFO sentiment conducted in a joint effort with Duke University found that 48 percent of respondents expected a US recession was possible by mid-2020. That negative shift in activity rose to 69 percent through the end of next year. While better than the 82 percent anticipation of an consecutive quarter contraction in growth by next year assessed this past December, it still paints a troubling outlook. It further reinforces the NABE's own survey of economists which predicted a US recession next year as a 60 percent chance. There are other international headlines - such as the suggestion from a former senior economic adviser that India had drastically overstated its growth for years - which reminds us of the general course the world is on. Traders should be mindful of our underlying 'value' trends as they weigh the pull of temporary distortions.

Chart of US GDP Annualized Change and Russell 2000 (Weekly) 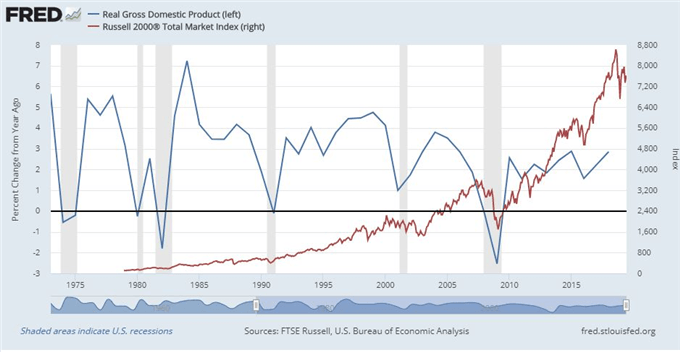 A Balance of Power Reversal on EURUSD, Volatility Potential for Aussie Dollar and Swiss Franc

When it comes to the shifting poles of regional power, the Dollar is clearly a currency which is losing traction. The Greenback was finally put into step with interest rate expectations these past few weeks when the certainty of a rate cut in the near future shot higher. The fundamental charge was enough to drive the DXY Dollar Index to the floor of its 12-month rising trend channel - though whether we broke that floor or not is up for debate. Regardless of the arguments to the particulars, the 200-day moving average for the benchmark pair never faltered. With rate speculation cooling until the group announces its intentions next week, we are left to source our motivations elsewhere. Is there anything material from which the benchmark currency can draw? A systemic appeal as a safe haven requires a full-tilt liquidity collapse while its carry trade appeal seems a hill too far to climb. In other words, the Dollar is more likely drift and play the supplicant counterpart to more motivated cross currencies. With a innate drift towards range reversal, certain opportunities may arise.

Chart of EURUSD with 100 and 200-day Moving Averages (Daily) 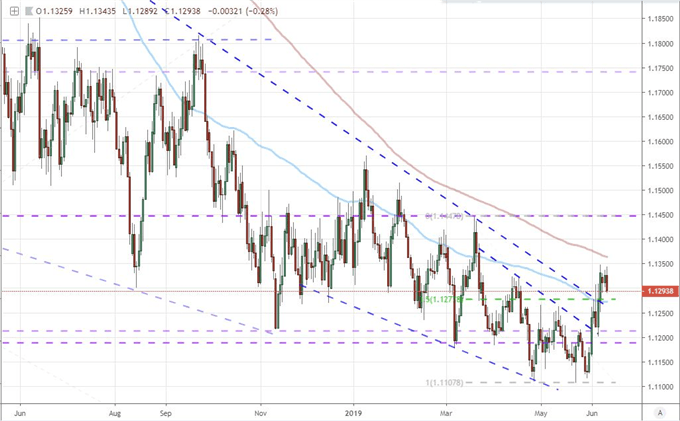 One such pair that is positioned with enough event risk to cause a stir - though whether it supports a cohesive anti-Dollar drive is dependent on the outcome of the fundamentals - is EURUSD. The Euro absorbed ECB President Draghi's remarks this past session, but his warning of trade war fallout is routine at this point. What was more interesting was the surprise auction of 20-year Italian bonds which surprisingly were purchased on the market at reasonable yield despite the threat of an excessive debt procedure (EDP) ruling and fine by the EU. If that same pass is reinforced today when the Eurozone finance ministers meet, then there could be a significant charge in store for the Euro. More likely, the currency's recent passive climb will be challenged by the financial realities. If that is the case, a drift back or motivated retreat could reinforce some appealing technical opportunities like the EURUSD's rejection from its 200-day moving average (with a break of the 100-day as a support trigger) or EURAUD at range resistance. 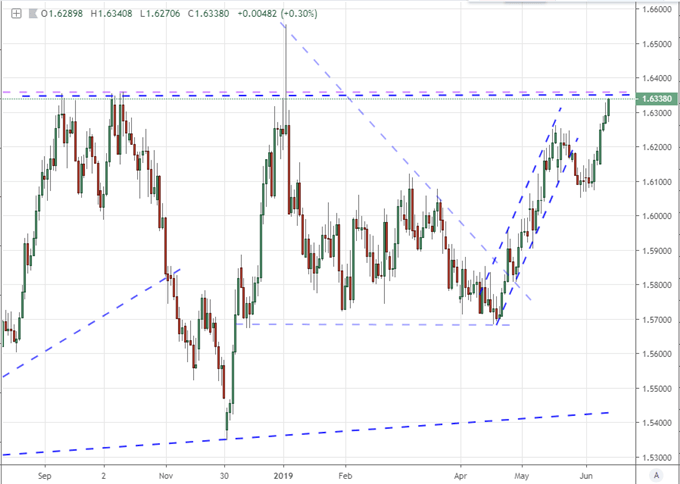 There are other currencies that don't face the same earthshattering fundamental event risk nor the scope to transmit that wide, but they can nevertheless rouse their own action. Speaking of EURAUD, the Australian Dollar has been drifting despite pangs of influence from the China trade war spillover. This currency is a strong proxy to the trade war owing to its exports to China; but unless its larger trade partner, there isn't an effective policy curb on exchange rates. Data like the jobs and inflation expectations in the meantime can also shape domestic views. The Swiss Franc is another overlooked currency which deserve a pause today. The concern over the EU's warning to Switzerland to adopt its framework or risk losing access to the region's capital markets hanging in the air and has lifted EURCHF. The SNB can add complication to this scenario but the best it can do is simply play the role of a non-descript background view. For nontraditional 'currencies' I'm also keeping very close track of gold. As a safe haven with an acute sense of confidence in the perceived instability of traditional financial assets (government bond yields and currencies), there is an extremely valuable indicator in this market, not just a simple trade. We discuss all of this and more in today's Trading Video.