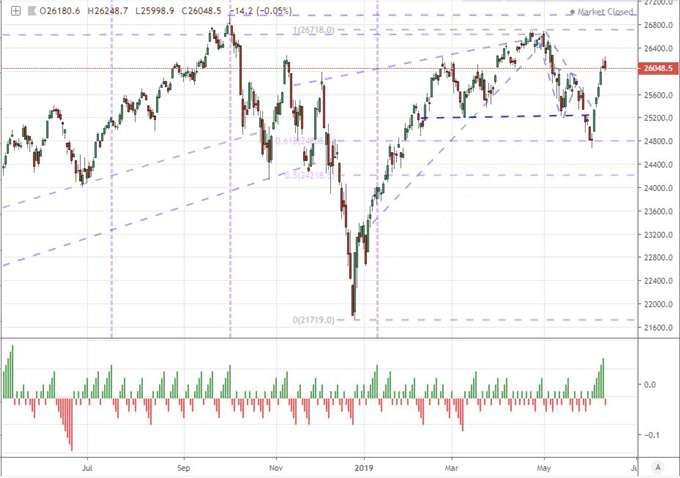 Even though there were a number of questions and inconsistencies to following the early weekend news of a US-Mexico trade deal to avert a blanket 5 percent tariff on all Mexican imports into its peer's borders, the news would still put wind to the market's back. How much of that run was hold over momentum from the previous week and what percentage was fresh enthusiasm owing to a needed break in the oppressive trade wars? Well, we would see much of the lift that kicked off this week vanish through the full term of this past session's trade. After putting in for yet another bullish gap on the open, the Dow and S&P 500 would eventually lose all the altitude mustered through the morning and eventually close the day in the red. For the blue-chip index, that is the first lower close in seven trading sessions - bringing a close to the longest charge for bulls since May 14, 2018. While these are not the only benchmarks from which we can evaluate the general mood of the speculative rank, their momentum and proximity to record highs exerts considerably greater weight.

The market's appetite to carry a relief rally through the supposed alleviation of one front on a problematically global and fluid trade war eroded quickly as it became clear that there were complications to the US-Mexico breakthrough that could lead to fresh problems in the near future. US President Donald Trump took to twitter again Tuesday to weigh in on the economic conflict mounted through trade with praise for the tool and not-so-subtle indication that the White House may yet increase pressure rather began a steady withdrawal from the economically-crippling policies. Trump once again called tariffs a "great negotiation tool" that are "revenue producers" and a "powerful way to get companies to come to the USA". Relatively few people would agree to this assessment, but it is interesting that such praise was even raised. Combined with the PR support the administration is trying to muster with the Mexico agreement, it seems more and more likely that there is an effort to rally support for further escalation in the trade war with China. 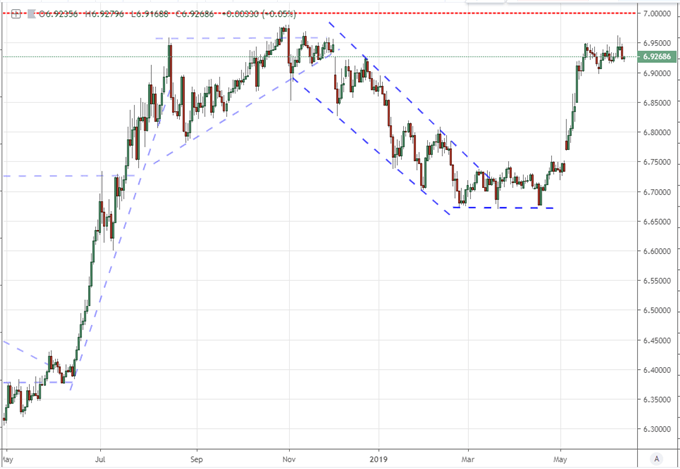 Trump would remarked somewhat cryptically Tuesday that he was the hold up on a US-China deal, suggesting that he was holding out for the best possible for his country. That does more to raise uncertainty around trade wars rather than induce any sense of confidence as the terms of progress are based on an individual's whims rather than a set of objectives and rules. Adding to this uncertainty, Chinese authorities stated through State-sanctioned media that it was ready to "fight to the end" is the White House continued to raise the stakes. Meanwhile, the disparity in reasoning for banning Huawei between Trump and his Treasury Secretary Steve Mnuchin (economic interests versus national security) raises concerns over the existence of an actual plan. Even the confrontation with Mexico represents a risk for flare-up. Given the President has suggested the "best part" of the Mexico deal hasn't been revealed while Mexican authorities suggest nothing else has been discussed could create problems with Trump's warning that tariffs could be back on the table if its trade partner reneged. 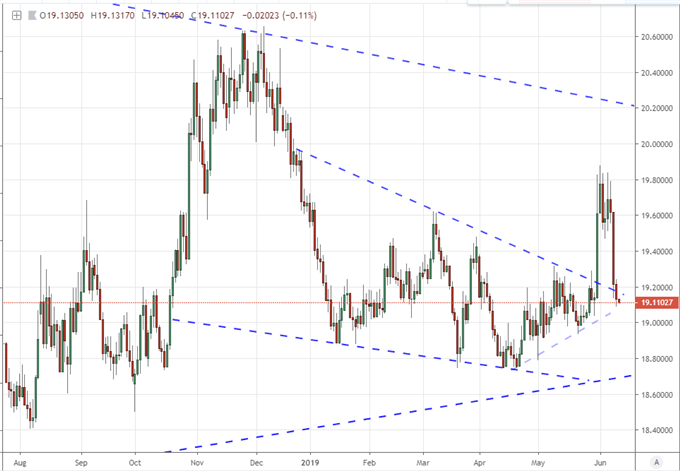 While trade wars may have been the top headline theme to start off this week, it is a relatively low probability that the economic relationships were playing a key contribution to the rally we've seen over the previous week. A relief rally through a fast reversal on a US-Mexico scuffle never established the speculative critical mass necessary to carry a significant move. Without a viable path out of the woods between the US and China, the risks of escalation seem to still outrank any tepid opportunity to sustain a meaningful risk appetite rally. With the next meaningful deadline on the trade front pushed out to the end-of-month G20 meeting, we are in a no-man's land of fundamental influence. The same is true for another noteworthy theme: economic activity. There are no key events on tap that could single-handedly stand as a key growth update for a major global economy. No official GDP reading, no PMIs and not even a high-level ancillary figure is on tap. Yet, another hole in a need for continuous drive for a questionable risk run. 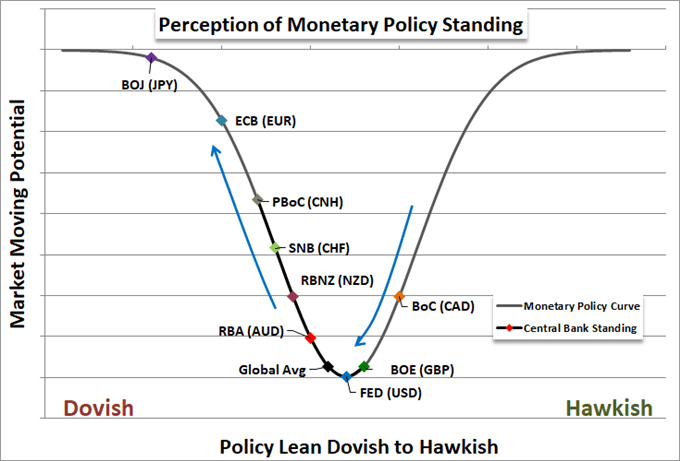 If we are plumbing the systemic themes for motivation, trade wars seem to have lost their relief rally capacity and now sport greater potential fallout than opportunity for further gains. The bearing on the global economy in the meantime is looking for the next economic milestone or supranational institutional warning. That leaves monetary policy to fill the sizable gap in speculative value and prevailing exposure. The Fed is the single best candidate for bullish interest through a dovish shift, but we are currently in the two-week blackout period that precedes rate decisions. The potential for global market movement from the other major central banks drops sharply after consideration of the Fed. There are no key milestones in the immediate future for the ECB and BOJ and both are already all-in. If there is any hope for fuel through central bank support, it will likely have to result from an unexpected development. 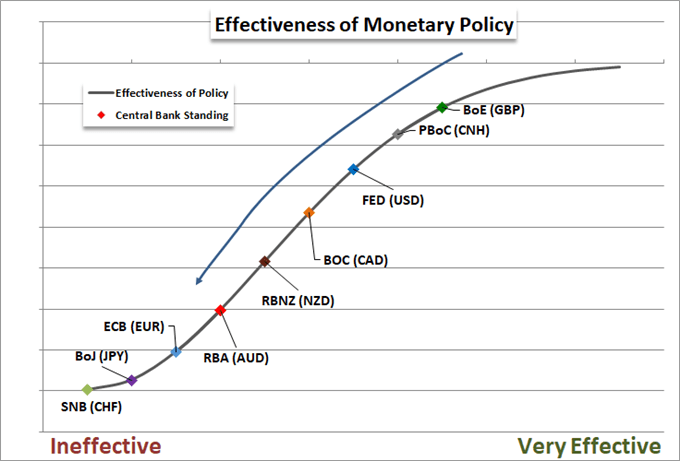 Dollar May Draw from CPI, Euro and Pound in Full Loiter Mode, Keep Tabs on Gold

Looking for regional influences, the Dollar may face some of the best potential between its technical standing and the fundamental docket. On the chart side, the DXY Dollar index is standing at the very cusp of a technical break on a 12-month rising trend channel support. A constricting and terminal wedge is leveraging the possibility of an eventual break, but a bearish resolution that truly turns the bears into control with a ready clearance of the 200-day moving average as support is still uncertain. Looking at the economic docket for the next 24 hours, the US consumer inflation report (CPI) for the past month is due for release. White House Economic Advisor Cramer's suggestion that the President isn't interested in a weak-Dollar policy rings hollow and the upstream PPI figure sets the scene for the more important consumer readings. If the CPI comes in materially weaker than expectations, we may see the needle move on forecasts beyond their already-dovish setting, but that will prove a significant threshold to surpass. Alternatively, a 'beat' is unlikely to rally a recovery in rates and the Greenback single-handedly. 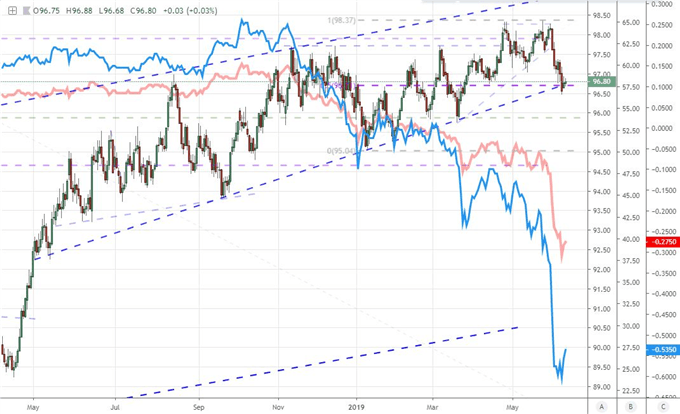 Looking for the two most liquid currencies in line after the Dollar, we are left with a very clear scenario for lingering. That is as much a frustration for the Dollar as the Euro and Pound as the indirect charge has proven a more effective driver for the Greenback than its own domestic fundamental motivations. From the second most liquid currency in the FX market, the Euro-area investor sentiment index (Sentix) offered up a significant dive into negative territory (-3.3 versus 2.5 expected). That adds to concern over the perceived instability of the region as a reflection for the local currency, but the real focus should be kept on the threat that Italy poses as a fiscal landmine for the economy's strict budget rules. The country and Union leadership seem on a collision course for control over the shared currency’s fate. When that comes to a head is unclear. Timing for the groundswell behind the Pound is even more distant. We are entering the second date of the 1922 Committee's hustings with a vote intended to shed low-ranking candidates for the leadership position. Ultimately, the time frame for a new PM is over a month away, and leadership seems necessary for a serious Brexit negotiation. Without the course for divorce clearly defined, I remain skeptical of a Pound course. 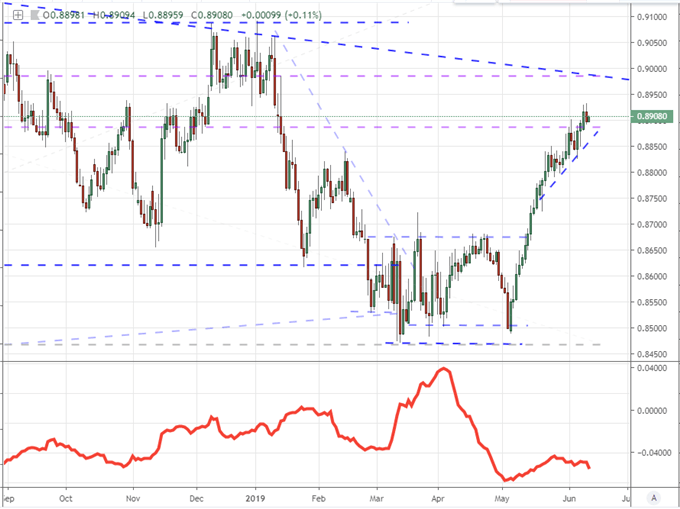 If you are looking for a key measure of market-wide fear of stability, my go-to benchmark is not the Dow, Dollar or Treasuries. Gold represents a unique haven for its particular appeal as a historical harbor to volatile markets along with its particular standing as an alternative to traditional financial assets that depend on central banks for stability (government bonds and currency) as the largest central banks throw caution to the wind with stimulus intent. The natural alternative to the 'normal' financial assets is gold. The precious metal showed its heft in 2008-2011 when a speculative recovery was sourced through extreme stimulus from the world's largest central banks - a move that uniformly devalued the largest currencies. Are we heading for the same scenario? Watch this commodity closely. We discuss all of this and more in today's Trading Video. 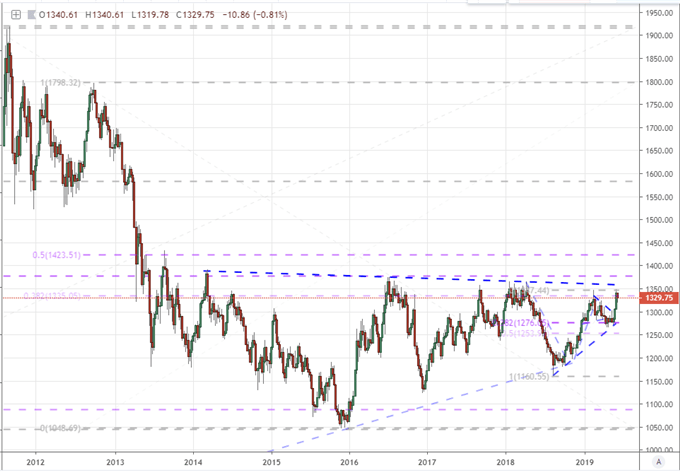