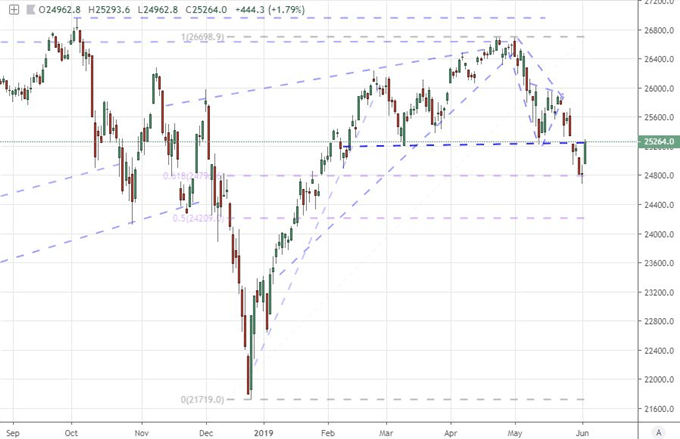 The Fed Offers Some Reprieve

Given the battering the global markets suffered Friday and Monday, there is a keen awareness as to the state of 'risk' amongst traders. It was therefore a clear sense of relief for those reticent to shed their exposure thus far when speculative assets came up for a gulp of air this past session.Fed Chair Jerome Powell supported this breach out of the crushing depths with the suggestion that more support may be forthcoming. However, mustering the same blind faith that bullish interests are back in control isn't as easy as it once was with complicated risks like trade wars and a systemic slowdown in global growth frequently reminding market participants of the landscape. For now, the reading is a bullish one. The benchmark US indices (Dow, S&P 500 and even the Nasdaq) were up on the day. Global stocks followed suit with some leaders and laggards (DAX versus the FTSE 100), emerging market assets firmed and junk bonds jumped. My preferred measure of risk trends under power - bullish or bearish - is the breadth of the move. So, there is little mistaking the intent this past session. Yet, there are points of concern.

The most immediate cap to speculative momentum is drawn from the technical picture. Both the Dow and the S&P 500 offer up the same general picture. A Tuesday rally moved the benchmarks back to key levels that stood as important support against a reversal for two-and-a-half months until they caved this past week. The evolution of former support taking over as prevailing resistance is a familiar one in the technical analysis textbooks. When a market is not primed to convert a technical break into a full-tilt reversal and trend, there is frequently a retest of such weighty figures with speculative interests struggling at the same level just on the opposite side of the barrier. As a pace setter for the global capital markets, the pattern we see in US indices is proving remarkably indicative across the range of assets and regions that shape the picture of 'risk'. 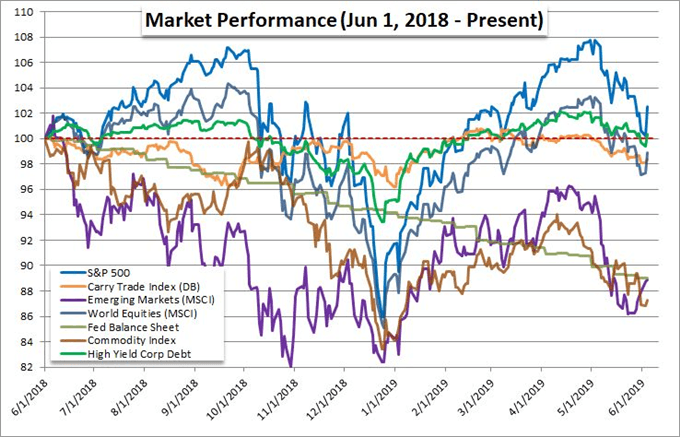 Another purely market-based observation that should raise some concern over the intent of the speculative rebound is the relative performance of those market that have acted as the leaders of the preceding climb. It is always possible that a new charge for sentiment has seized control of participants' conviction but that is highly improbable considering there have been so few tangible improvements in the foundations of the enthusiasm. Following the lines of relative strength, we find equities this past session outperformed more stretched risk assets like emerging markets (easily confirmed with a quick review of a ratio between the MSCI's all-world equity index relative to its emerging market measure). Further honing in on the source of speculative charge these past months, we find the US indices (S&P 500) has outperformed a benchmark for the 'rest of world'. Yet, the US tech sector has not taking up the responsibility for carrying us to new heights through 'disruption' as the FTC investigation has suppressed the Nasdaq Composite and key tickers like those from Google, Apple and Facebook. 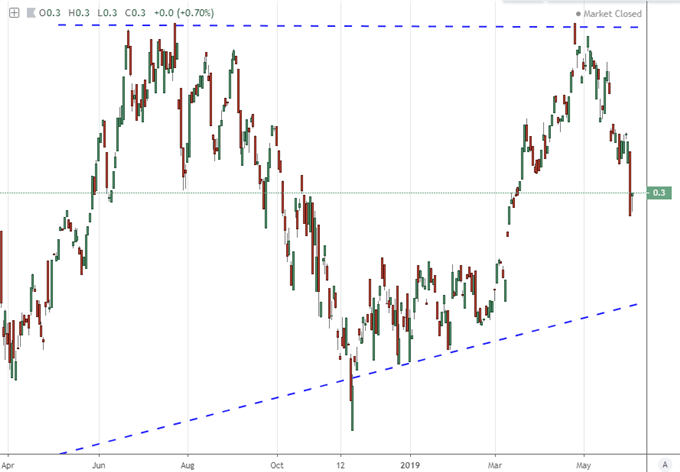 When the Distraction Passes, We Still Have Trade Wars and Recession Fears

The bullish lift this past session was not an unfamiliar one. At the start of this record-breaking bullish cycle, we were prompted to relief from the Great Financial Crisis by the efforts of the world's largest central banks. Their collective drop in global interest rates and the wholesale adoption of stimulus programs helped to stave off a permanent spiral of panic and instead set the stage for opportunist speculators. Along the way, the effort transitioned from an earnest need to stabilize the financial system and reseed growth into an overt prompt for moral hazard, but it is difficult to pinpoint that tipping point. For investors who have participated in this artificial windfall, it is natural that they are tuned into any further support through familiar lines with many willing to respond according to the script. Yet, monetary policy is far less the cure-all that it was once considered. If market participants really wanted to, they could focus less on the availability of slightly cheaper funds and instead worry over the 'need' for even more extreme accommodation and the economic/financial trouble that would necessitate such policy.

Outside of the temporary oasis of central bank support, we are still dealing with burdened themes like trade wars. While Chinese officials are reportedly calling on the US to reopen dialogues, we were also met with reports from Treasury officials that Presidents Xi and Trump are not certain to meet at the G20 at the end of this month. China has also made no indication that it is diverting its efforts to work out its own blacklist for American firms in retaliation for Huawei or that it no longer intends to use rare earth materials as a tool in the uneven trade war escalations. Perhaps one of the more encouraging - if inadvertent - developments for the state of trade are reports that Senate Republicans could block the President's efforts to apply the 5 percent tariff on all Mexican imports to avoid the economic blowback that it would carry for the instigator. 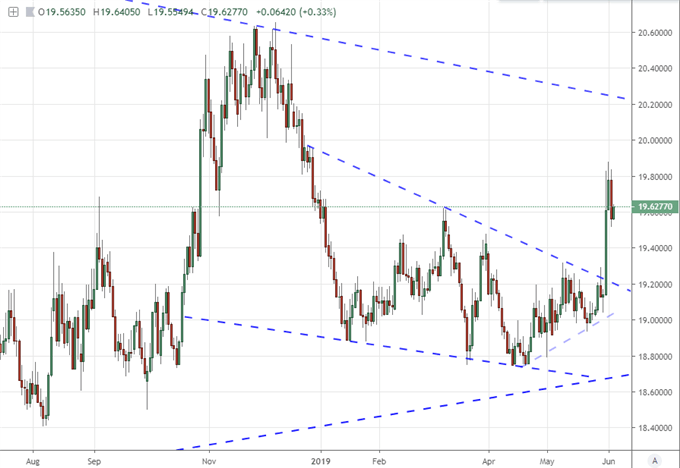 Perhaps the most unambiguous weight to sentiment at the moment is the state of economic activity. This is the foundation of financial potential with capital gains and income dependent to a greater measure on the health of an economy. It is therefore troubling that the World Bank's semiannual update on GDP forecasts issued a 0.3 percentage point downgrade to its 2019 projections to a 2.6 percent pace. It should come as little surprise that the greatest risk to the future cited in the group's reasoning for heighted concern was the state of global trade. Looking ahead, there is plenty of high-level event risk that can be interpreted for its implications of growth. The developed world's service sector PMIs are particularly important consider that particular business sector accounts for the hearty majority of their output. In particular, the US ISM non-manufacturing report is at the top of my watch list.

With a higher level of realized volatility and technical patterns like those we find from the neckline return on the Dow's head-and-shoulder pattern, it is natural for speculative interests to be piqued. Yet, many of these fundamental themes are as unstable as the technical patterns to which they contribute. That should lead us to set realistic expectations for otherwise tempting staging. The Dollar is a good example. After its pullback from a double top, the DXY Index finds itself at some interim support - the midpoint of the March to May climb. That is unlikely to hold back any dedicated tides as the critical milestones are further down. Then again, there is a hearty amount of anticipation that may discourage traders from making their calls now when there is service sector activity, 1Q household wealth and May payrolls all due Wednesday through Friday. 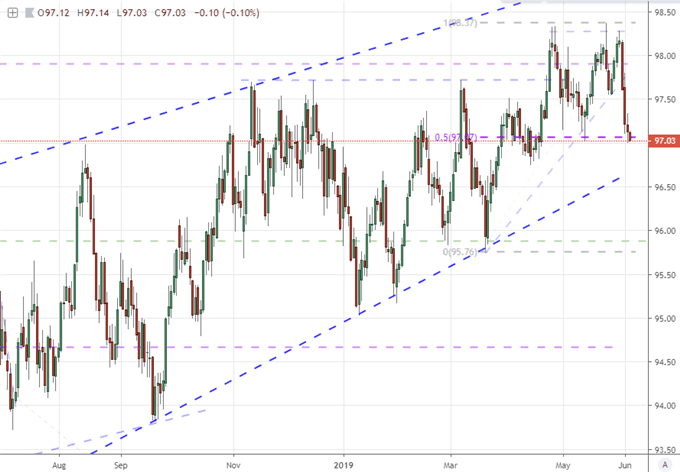 The Euro and Pound are similarly afflicted majors. From the Euro's perspective, the EURUSD reversal pulling through to this weekx has brought us to more important resistance in a 12-month descending trend channel and 100-day moving average. Then again, there seems little intent to break it without some convincing spark. Italy is one of the more fractious aspects to the fundamental backdrop and reports that the coalition government in the country has worked out its differences to forge ahead with an anti-EU policy drive is a problem for the stability of the Euro. A further complication for the shared currency gaining any meaningful traction is the pull of Thursday's ECB (European Central Bank) rate decision. There is little chance that they add to their already-extensive easing effort, but speculators are unlikely to take the chance. A similar state of indecision exists for the Pound but the focus of its own uncertainty is far more ambiguous in both scope and time. To carry on with the Brexit negotiations, we first need a replacement for the resigned Prime Minister Theresa May. As appealing as EURGBP may look from purely at technical perspective, consider its many eccentricities. 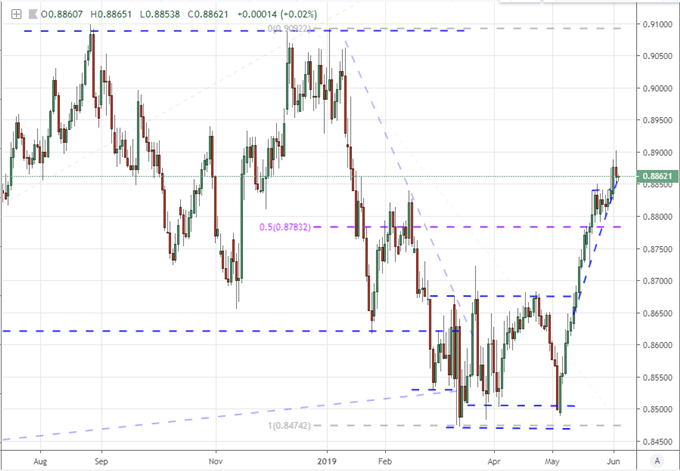 The most overt example of a currency that faces volatility at the same time that it is due to face extreme hurdles towards the development of trends has to be the Australian Dollar. This past session, the RBA (Reserve Bank of Australia) cut its benchmark lending rate by 25 basis point to a record low 1.25 percent. For a carry currency, that is a serious blow; but there is both competition from the US Dollar already sporting a 75 basis point premium and little general interest for a passive carry trade on historically low yields and differentials. We could say the market was already pricing in that reduction, hence the AUD's slow oblivious climb; but I believe there is as much disruption from the reaction to that even from the anticipation of the next update in line: the 1Q GDP reading. When there is critical event risk on the immediate horizon, it is difficult to commit to a clear trade. We discuss all of this and more in today's Trading Video. 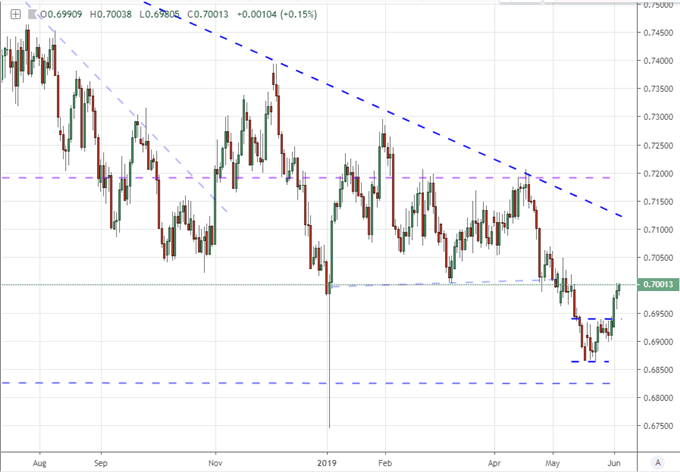