Dow or Dollar: Which is More Critical Measure of Stability Amid Trade Wars?

The greatest restraint on the markets these past weeks and months has not been a lack of quality technical levels nor influential fundamental themes. In fact, we have sported an abundance of both across most of the benchmarks for risk assets. The firebreak between catalyst and substantial market movement has instead been a general apathy towards changing winds that has capped meaningful moves before they could ever build a head of steam. Complacency is a difficult trait in a market to find its origin, to find its borders and to determine its breaking point. And yet, its influence is unmistakable. From what we have seen this past week, we may be experiencing the strongest bid to break the inertia that we've seen so far this year. The evidence of this shift in sentiment is best measured in the charts. I start with speculative benchmarks in the US indices. The Dow and S&P 500 put in unmistakable technical reversals this past week with the break of 'necklines' on very prominent head-and-shoulders patterns. Initial breaches have not been our trip point for new trends, but rather the like of significant follow through after the high profile move. It seemed we were heading for that familiar and frustrating pattern until Friday issued another strong and productive drive lower. 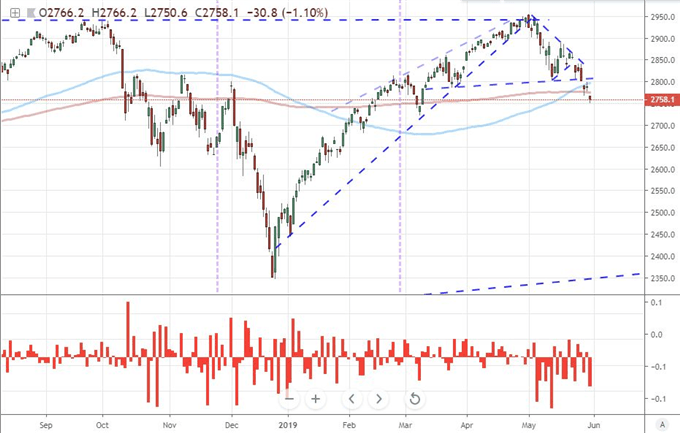 With a Friday gap lower - the 12th in the past 18 trading days - the S&P 500 and Dow made another strong push against their overt reversal patterns. That move would also close out the month of May which was the third worst monthly performance for the broader index in 7 years - and all three of those sharp losses were registered in the past 7 months. The more evidence that accumulates behind a bearish shift, the higher the probability that the sentiment swing proves permanent. Meanwhile, the breadth behind the market's struggles has indicated trouble long before the US equity markets capitulated. Rest-of-world equities have traded at a stark discount to their US peers, particularly since this year's recovery effort. The German DAX, French CAC, Italian FTSE MIB and Japanese Nikkei 225 all projected their pain through Friday. Junk bonds, commodities, carry trade and global government bond yields all followed suit, falling form significantly lower levels than the Dow. There is a lot to learn from the exceptions, so the fact that the EEM emerging market ETF held steadfast perhaps indicates a sense of relief found via the aggressively dovish swing in Fed rate forecasts. 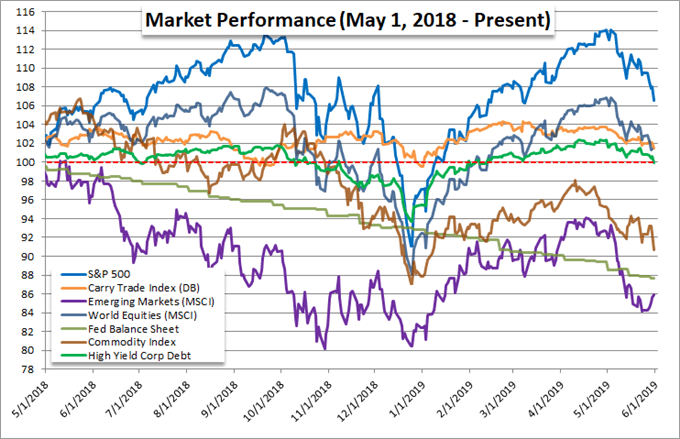 The progression of bearish evidence of late - from the reversal from record highs on May 1st to the head-and-shoulders 'neckline' break this past Wednesday to the charge of follow through on Friday - signals deepening conviction. However, even a string of technical milestones doesn't ensure a systemic change in both bias (bullish to bearish) and intent (range to trend). Trading with a sense of caution and recognition of the probabilities is still the appropriate approach as we look for fundamental footholds to ensure the changing of the guard.

As we watch the market assess its delicate balance of risk exposure against the hope for further returns (income and capital gains), the most definitive charges of confidence or pessimism will come via key fundamental themes. At the top of the list for influence in the week ahead is the familiar trade war banner. The US-China economic conflict is still the largest notional tab - no surprise as it involves the world's two largest economies. China's tariff hike from 10 to 25 percent on the $60 billion in US imports took effect Saturday morning, June 1st. That was retaliation for the United States instituting the same jump in import tax for the $200 billion in Chinese goods on its list. Looking to mirror the Trump administration's more unorthodox policies, it was also reported that the country had prepared a list of American companies it was preparing to ban and was prepared to use rare earth materials as a tool. Expect headlines between these two countries' troubled relationships to show up unexpectedly and command further periods of volatility. 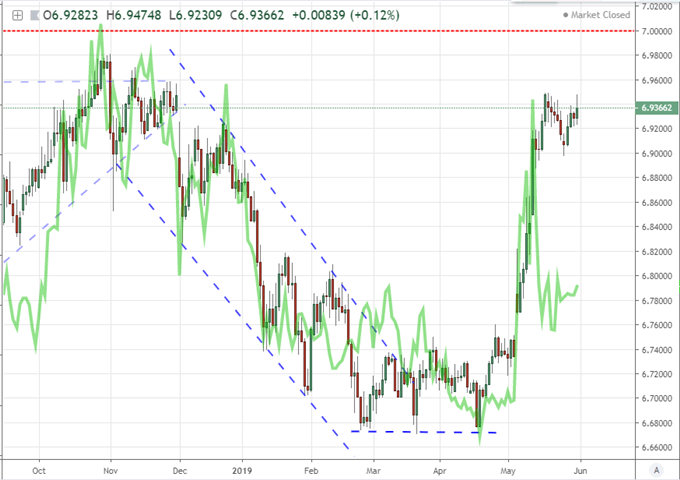 Where the US-China engagement is a steadily unfolding issue, the leading edge of trade wars as a market-wide threat is the recent flare up between the United States and Mexico. Up until President Trump's unexpected tweet on Thursday, it seemed that the North American neighbors were finally finding their way out of a self-imposed trade dispute. The White House announced it was lifting the steel and aluminum tariffs on Canada and Mexico a few weeks ago, ostensibly to move forward the USCMA (replacement for the NAFTA accord). All of that optimism came crashing down however Thursday evening when the President announced in a brief social media update that he would apply a blanket 5 percent tariff on all Mexican imports starting June 10th. We learned Friday that this was a decision made against the advisement of key senior officials (Lighthizer and Mnuchin) and that US businesses were bringing legal pressure to force a change in course. Trump stated that the move is in response to illegal immigration which has brought Legislative complaint. With all the blowback, it would seem a walk back a high probability. However, this administration has made clear it was willing to break from convention to get its point across. 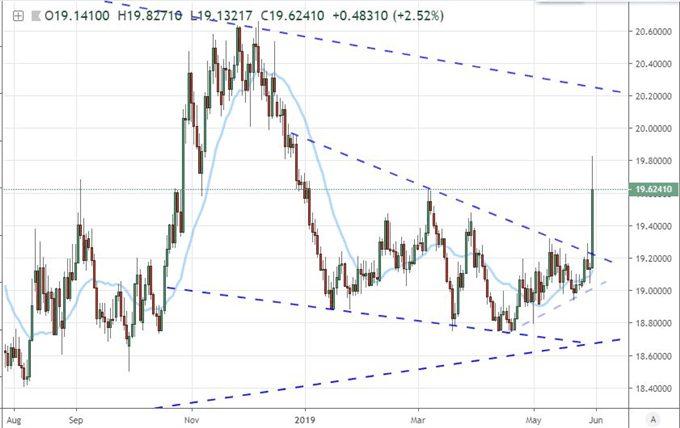 Trade may be the most overt theme, but it isn't the only one to keep track of next week. Economic activity is a theme slowly gaining traction against the backdrop of sentiment and data. Most of the official 1Q GDP figures have already crossed the wires and now we are due less official monthly figures like PMIs and NFPs in the week ahead. With Fed surveys, consumer sentiment reports and business groups all warning of economic strain under the burden of range of issues, the trade wars seem a point of unnecessary provocation. And, the more likely a stall or correction in the global economy seems, the greater the interest in stabilizing forces. Governments' in-fighting while countries find themselves increasingly at odds with each other, a true reliance on something like the US infrastructure spending program should worry. Monetary policy is a more familiar and actively-used tool, but it has been used to the point of disrepair. Anticipation of further easing by the major authorities when we are already at or close to emergency settings should raise serious concerns.

Systemic Fears Vs Scheduled Event Risk for the Dollar, Euro, Pound and Yen

Pulling back from the market-wide issues, there are a host of crucial fundamental issues for which FX traders and regional investors should be mindful. The Euro and Pound have been in something of a holding pattern of late, but that could very well change in the week ahead. For the world's second largest economy, the ECB rate decision and Eurozone unemployment rate are just a few of the data-oriented updates we are due. My real interest is in the scale of tension between Italy and the European Community moving forward. The country's leadership has made clear it intends to breach financial restrictions with Deputy Prime Minister Salvini warning the EU could fine Italy 3 billion euros for the transgression. The EC is due to review the country's financial position on Wednesday. As for the British Pound, Parliament is due back from recession and the Conservative Party has to step up its leadership decision with Prime Minister May due to step down on Friday. Most believe that the PM resignation and EU Parliamentary election results significantly raises the risk of a 'no-deal' Brexit that hurts local markets. 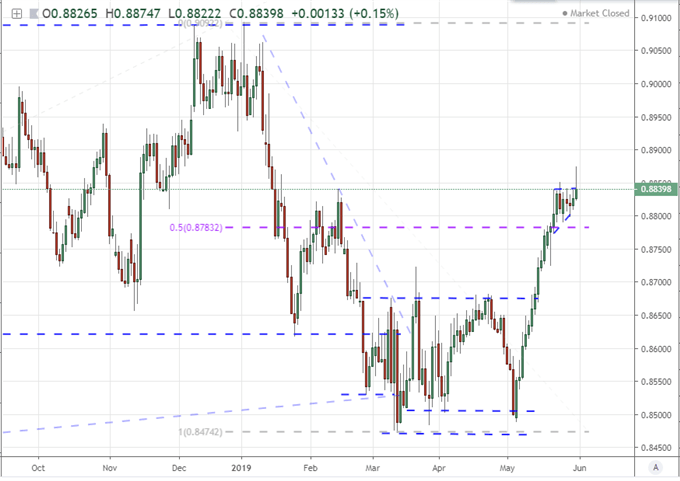 As the risks mount and distinct caveats alter the shape of the market's landscape, the need for appropriate safe havens grows more important. One of the currencies which seems to draw a defacto simple haven moniker - a designation ill-deserved - is the Japanese Yen. Historically, this currency correlates to risk aversion flows as speculative interests are unwinding carry trade funded through a short Yen position, but there isn't much carry trade to burn at the moment. Nevertheless, my equally-weighted Yen index has extended a remarkable two-month drop to trade at lows not seen since the January 3rd flash crash with a low not seen since November 2016 on a closing basis. Another unusual haven of interest to me is the Swiss Franc. This currency is similarly loaded with fundamental flaws, but it also happens to be a familiar unit with substantial liquidity without the troubling connection to full-tilt trade wars (Dollar), systemic stability risks (Euro) or crashing through a delicate economic separation (Pound). Then there is of course Gold which is the alternative to risk aversion that happens to come alongside a recognition of broad financial instability. It was hard to miss the Friday surge from the metal above $1,300. 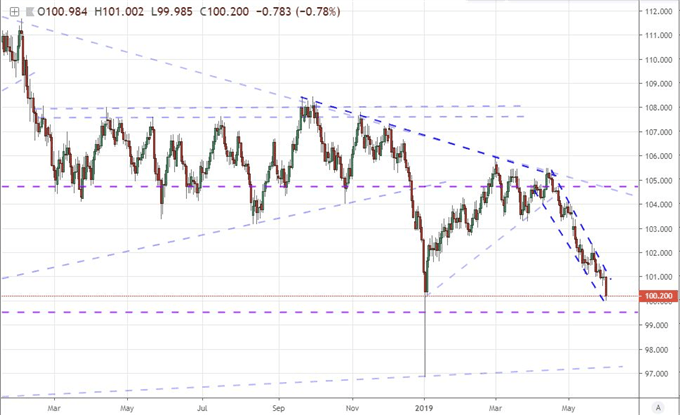 Perhaps one the most conflicted but important currencies to monitor moving forward is the US Dollar. The currency is still a safe haven owing to the unmatched size of its economy and the depth of its markets - particularly Treasuries and money markets. When the markets are crashing, appetite for these anchored assets will bolster the Dollar as it facilitates the foreign purchases. However, short of a systemic wipe out, the Dollar has unmistakable issues. Its economic forecast is dropping quickly and the rate forecast for the Fed shows an official Fed Funds futures outlook for three cuts through the end of next year but reliable bank teams are starting to favor multiple cuts before this year is out. That would be an extreme course reversal, so if that is your baseline, it would likely also accompany some significant degree of financial crisis. The most important consideration for the Greenback moving forward - one that will also be overlooked as it is more abstract - is the gradual faltering of the benchmark currency owing to its position at the center of so many trade and political conflicts. Trade partners are increasingly forced to find alternatives to transacting in the Dollar. With the Mexico tariff move, the risk of a collective retaliation has risen sharply (China was always going to struggle with mustering sympathy). We discuss all of this and more in this weekend Trading Video. 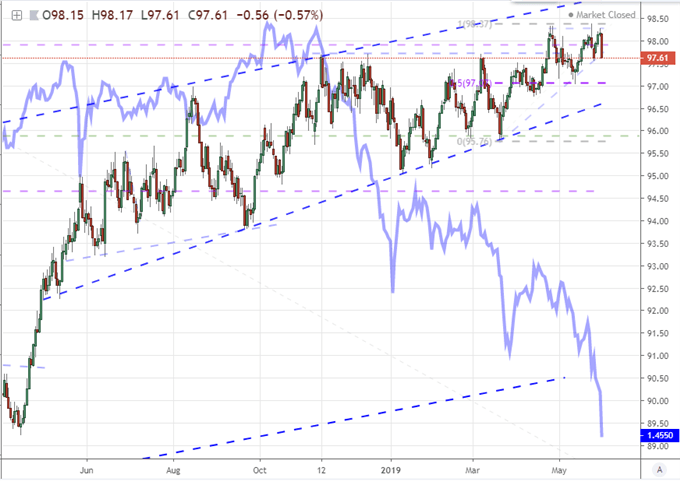