On Wednesday, the US indices raised the threat level to risk assets significantly with their unmistakable break of support on favorite textbook reversal patterns. Yet, primed with speculative intent just below the critical support levels at 28,250 and 2,800, the Dow and S&P 500 (respectively) were noticeably stoic this past session. Just as a key fundamental event can tip a systemic drive in the capital markets, a high-profile technical move can trigger a speculative avalanche. The operative word here is 'can'. For those keeping tabs on the markets these past weeks and months, there have been far more instances of key developments - fundamental and technical - failing to produce critical traction than there have been occasions where the market's response has lived up to the promise of the catalyst. It can be difficult to definitively establish whether an asset or the market-at-large is in a position that it will run versus stall or if it maintains a particular bullish or bearish bias, but evidence will add up over time. At present, it is clear that there is serious speculative inertia that needs to be overcome if we are to establish a full-scale trend. 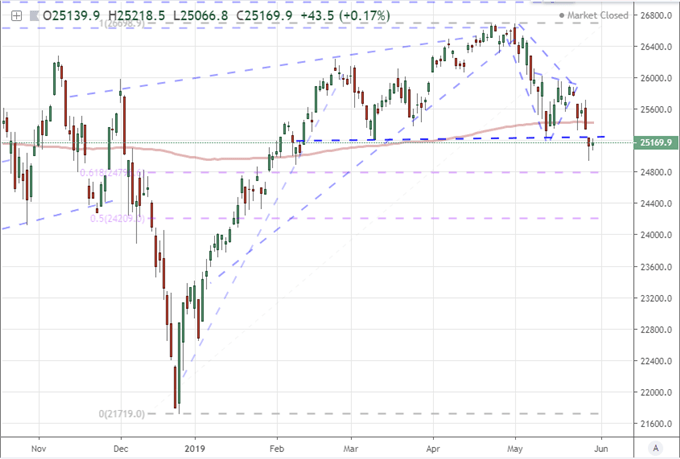 As we await the financial system's awakening, it is important to realize that there remains considerable jeopardy for a serious risk aversion should the market start to pay heed to the cumulative evidence on hand. The underlying fundamental issues of slower growth, hamstrung safety nets and fractures in global systems aide for a moment; there is obvious priced-based pressure showing through. The tentative H&S-style reversal patterns from the high-profile speculative leaders may give the impression that there isn't a firm bearish view amongst the masses. However, US indices are the exception to the rule. Global equities continue to trade at a steep discount to their US counterparts - and are still sensitive to renewed selling pressure from the premium-laden category. Then there is the stark contrast in performance between the more speculatively-concentrated risk assets and the growth-sensitive markets like global government bond yields. 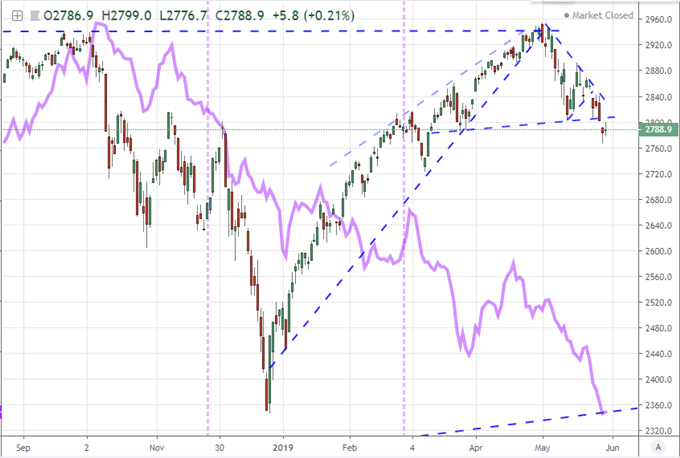 There is even some contrast in intent that we can draw from speculative activity behind related assets. Looking to the IGCS speculative positioning data we host on DailyFX, a notable contrast is developing between retail exposure in the S&P 500 and Dow CFDs. The former is still net short at 60 percent of those holding positions while the latter has flipped to a long position after the 'neckline' break. It should be said that the correlation between these two indices is practically 1.0 - extremely strong and positive, as in they almost move in tandem. Why the contrast? The crowd. The Dow is the more popular index amongst 'investors' around the world who treat the US indices as global macro benchmarks. It reflects their belief of the market and its complacency. In contrast, the S&P 500 is a 'trader' favorite with heavy speculative activity through derivatives like emini futures, ETFs and CFDs. The more active and risk-leaning retail participants are willing to call the turn it seems. 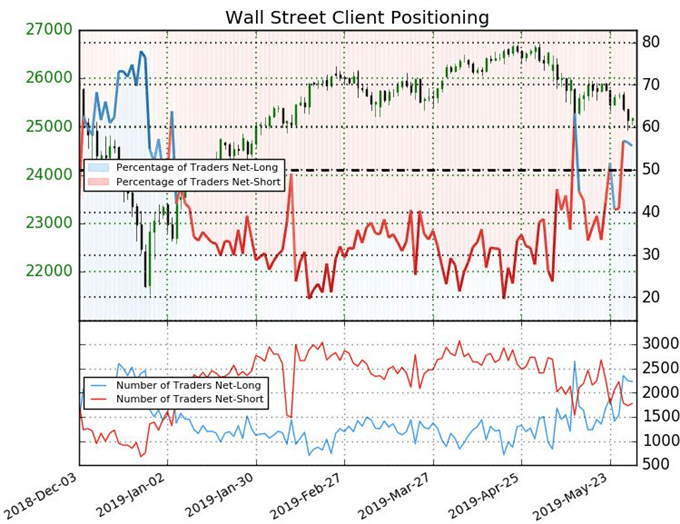 For fundamental sway, the trade wars remain the most potent threat for volatility and trend. The actions from the United States and China have ebbed following the Fed's increase to the tariff rate and China's subsequent retaliation, but the warning shots have been relatively steady. We have yet to see to see China match the Trump administration's ban of telecommunications company Huawei with the country instead seeking to reverse the move through the courts (US and WTO). A retaliation against Apple has not come crashing down and the movement on rare earth materials has been slow. China - not exactly intent to capitulate - has been slow to raise the stakes as it seems keen on keeping open an avenue for its trade partner to reverse course while not losing face. This past session, the US delivered a jolt with US Vice President Mike Pence stating they could "more than double" tariffs on China if necessary. Before these remarks, China was a charm offensive with the Ministry of Commerce reporting another 38 foreign companies committing to 49 billion yuan investment into the country. None of this seemed to tip a clear drive for USDCNH - or AUDUSD - one way or the other.

An unexpected avenue for trade wars in the afterhours trade was via the North American standoff. With VP Pence visiting Canada's Trudeau to speak on trade, it seemed the mood was positive on the USCMA. Yet, early Thursday, there were reports from the Washington Post that the President was considering new tariffs on Mexico in a bid to force the country to stem illegal immigration into the United States. That warning was ignored until Trump tweeted in the evening hours US that he would impose a 5 percent tariff on all Mexican imports starting June 10th and keep the levy in place until the country stemmed the tide of immigrants. Mexico stated its readiness to respond, but the threats of retaliation didn't seem to carry the same weight as the initial move. It is hard to see how the USMCA (the NAFTA replacement) will pass by all three players under this cloud. Keep an eye on the US open Friday to see how much influence this theme will exert over the resilient course of systemic risk trends.

Chart of USDMXN and 1-Day Rate of Change (Daily) 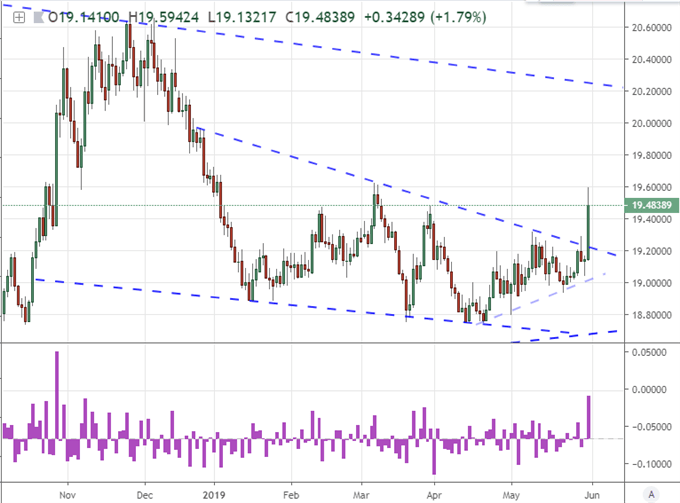 Another theme that has revived some attention recently - and is facing much more charge in the week ahead - is the state of global growth. Though there have been a number of updates to regional forecasts this week, the return of the Treasury yield curve inversion seemed to draw the speculators' attention in earnest. This past session's updates were more tangible between the final reading of the US 1Q update which issued a 3.1 percent annualized reading (only a 0.1 percent step down versus 0.2 percentage points expected) and Brazil (the ninth largest economy) registering an actual contraction of -0.2 percent. Ahead, we are expecting 1Q growth readings from Canada and India. The theme will carry forward into next week as we await a host of direct readings like Australian 1Q GDP, more timely readings such as PMIs and related reports like Friday's US NFPs.

Amongst the majors, there remains a status of wait-and-see more than there is any commitment to trend development. Amongst the majors, the Euro is still groping for its motivation. Italy is an internal systemic threat, but the country's budget fight doesn't start in true form until next week when the European Commission is due to review its budget. In the meantime, watch the FTSE MIB relative to Euro-area benchmarks and the Italian 10-year yield spread to its German counterpart. The Fitch rating agency warned this past session that Prime Minister May's resignation and the EU elections were evidence that a 'no deal' Brexit outcome was a significantly higher probability, but we don't even have Parliament off recess until next week and we won't have a key date to work with on the progress of this divorce court until the end of October. From the Australian Dollar, we have a leveraged technical appeal with an overstretched bearish move with recent technical congestion. A break and follow through is unlikely until we find a clear drive on the US-China trade war or the RBA rate decision (heavily expected to end with a cut) is passed. 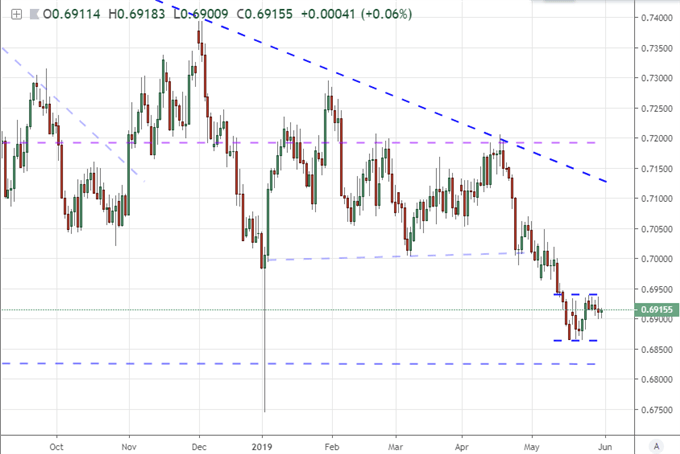 Drawing its direction from these uncommitted counterparts, the US Dollar is still managing to produce gains through the general struggle from the Euro, Pound and Yen in particular. Though the Trump administration's pursuit of trade wars and the government's allowance of ballooning deficits is detrimental to the long-term strength of the Greenback, the currency still holds as the most liquid player (by a wide margin). This role is proving crucial, as we find more traditional measures of lift for the USD are clearly heading lower. Consider the interest rate forecast which has a rate cut priced through year's end and two-to-three moves lower out through the end of 2020. The safe haven appeal of the Greenback is something that may find legitimate backing in the near future, but the traditional measures of risk (like the VIX) are currently deflated. Even the baseline for growth forecast is trending in the wrong direction. Consider the situation we are facing whereby the growth outlook is fading, there are multiple rate cuts priced in by the market and sentiment seems detached, yet the Dollar seems to hold firm. That is very unusual and thereby very unlikely to persist. We discuss all of this and more in today's Trading Video. 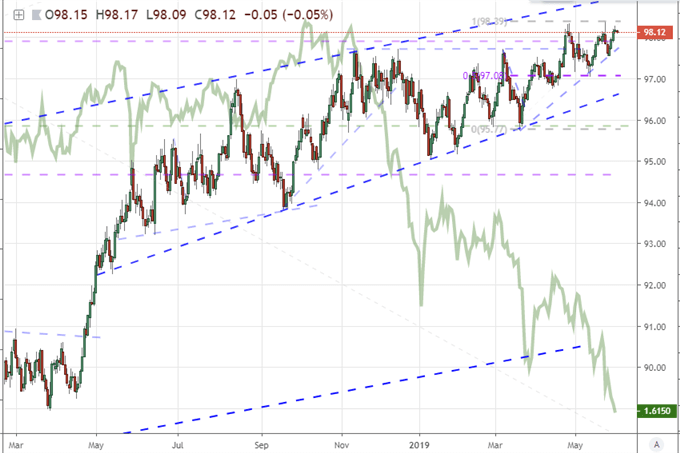