Dow, S&P 500 Forge Ahead on Reversal Patterns, Is There Enough Fear to Fuel?

Can a Critical Technical Break from US Indices Tip the Sentiment Scales?

Is it possible for a technical development alone to shift the entire momentum of an asset? How about the entire market? Of course, diehard technical traders would say 'yes' without hesitation. However, while charts are a quick way to absorb a market's standings, there use as a pattern projection tool or a reflection of underlying bias of the masses is up for debate with statistical success equivalent to traditional fundamental techniques. Personally, I believe in a self-fulfilling nature of both analysis forms which is why textbook interpretations are so often hit-or-miss. As such, when the markets are unclear of their fundamental moorings or otherwise carry a distinct bias that happens to align to a technical development, a purely sentiment-pried move can develop a serious head of steam. There is no more ubiquitious gauge of 'risk' in the market than US equities. The most heavily represented asset class in the world's largest economy will naturally exert more than its fair share of influence. That is why my attention is squarely on the US indices' bearish break this past session.

While the down draft in the US indices was fairly universal this past session, the most impressive showing would be made by the S&P 500 and Dow Jones Industrial Average. Both were carving out extraordinarily clear head-and-shoulders patterns through the past few months with this week's official open putting us right on top of the floor for these formations. The 'necklines' for both - 2,800 for S&P 500 and 28,250 for Dow - were cleanly broken with Wednesday's drop with opening gaps that would skip a print at the decisive figures completely. As discussed yesterday, the most frequent caveat to such technical patterns' effectiveness is that there is nothing to reverse. That isn't the case here as the first quarter rally - itself a desperate correction of the preceding quarter's massacre - made for a loaded environment though which a deeper reflection of value could readily highlight a speculative reach. Yet, a break does not guarantee follow through. In fact, in recent years, we have seen many more examples of failed liftoff than we have sparks that actually live up to their potential. The difference is tapping a deeper and more global nerve. 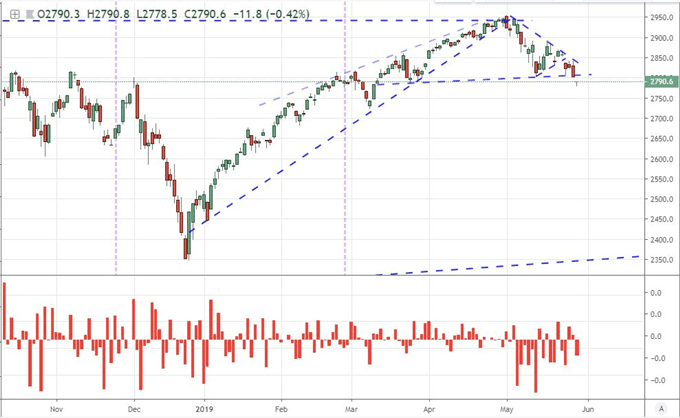 Given their status as a global ambassador to sentiment, the Dow and S&P 500 can pull more speculative weight across the capital markets. There has been a notable deviation in the correlation between the likes of the Dow and other risk assets in the former's climb these past months - in other works, the asset group has traded at a significant premium. Yet, that relationship tends to tighten up when markets are moving in the opposite direction. Being an uneven benchmark for risk trends is understandable when we consider the inherent disparity between the sway of fear over the comparatively reserved influence of greed. That said, will these benchmarks act as the forebearers of doom? The disparity between the indices and more growth-directed measures of risk like global government bond yields seems to spell a clear path for a necessary slump in stretched markets should traders be willing to appreciate their excess exposure. 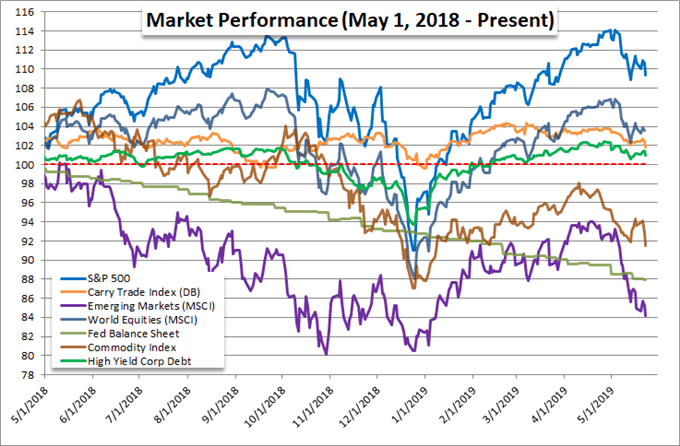 If we are going to turn a technical charge into a full-scope trend, the most practical means of changing our default setting is to hit a crucial fundamental theme. We touched upon a number of systemic issues this past session, but not all were truly market moving. On the political side, the coverage of the Special Council press conference easily superseded the controversy in US accusations of Iranian mines causing damage to the tankers through the busy Middle Eastern straight. Monetary policy proved far more comprehensive a source of market turbulence. While the Bank of Canada (BOC) rate decision was a direct event to balance expectations upon, there were more pressing systemic issues. The Mexican central bank warned of trade wars and extracurricular risks to justify its downgrade in growth forecasts to sub-one percent for 2019. The European Central Bank (ECB) and the Reserve Bank of New Zealand (RBNZ) both released financial stability reports Wednesday with a clear warning about excess leverage and the detrimental influences of global trade wars. The financial burden to the Kiwi and Euro was at least temporarily more apparent for the Euro and Kiwi Dollar. That wouldn't last though. 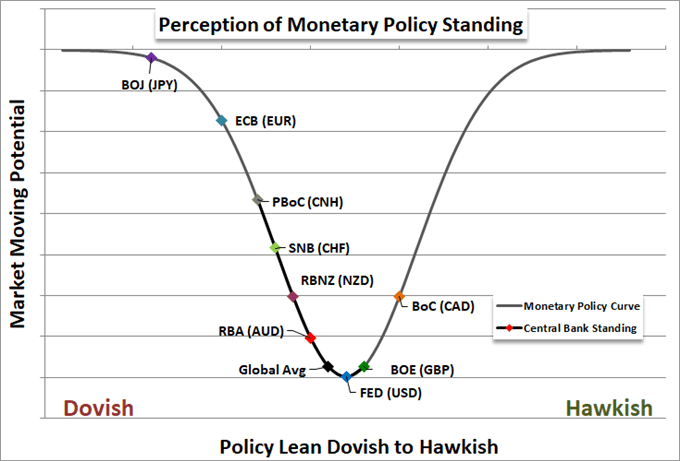 The most pressing systemic theme would once again go to the destabilizing global trade wars. While a multi-faceted issue, there remains an unmistakable concern over the blowback in the US-China relationship. The United States remains the most stretched participant in the engagement with a lopsided use of tariffs that only the world's largest consumer could exploit. With President Trump distracted temporarily by the local drama, China would find an opening to steal the headlines. Chinese telecommunications giant Huawei was attempting to use the courts to restore its place in the world's largest economy but a claim of unconstitutional policy restriction or a WTO loophole is unlikely to change this tide. Meanwhile, the People's Daily official platform for the Chinese government issued its unmistakable warning that "don't saw we didn't warn you" about the intensity of retaliation while urging raw earth materials as the next logical step in the trade war escalation China. With China stepping up its short-term reverse repos and scheduled to release its monthly PMIs, beware the financial signals coming out of the financial giant. 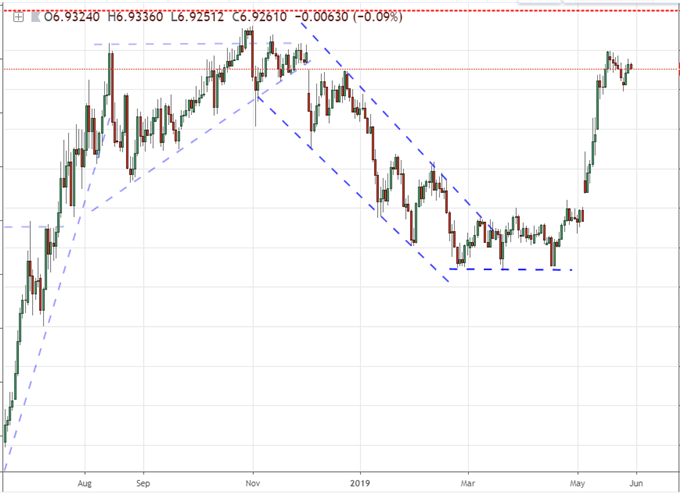 The BOC Musters a USDCAD Break While Anticipation Threatens to Throttle EUR, GBP, AUD and USD

For a more concentrated fundamental influence, the most active major this past session was the Canadian Dollar. With USDCAD registering one of the smallest historical ranges over its past 20 active trading days in a couple decades, the market was loaded and ready to respond. Ultimately, the Bank of Canada rate decision was worthy enough to force a break of the controlled price channel with a jump above 1.3500. Reflection on the economic struggles the country faces proved significant enough to override the 'benefit' that the BOC was 'only' facing an approximate 25 percent probability of a rate cut over the near future. Governor Poloz and company's concerns over the influence of global trade wars produced enough bite to offset the fact that it still remains one of the least dovish major players across the majors. That is not a particularly flattering distinction in the grander scheme of things but it earned the initial technical response. 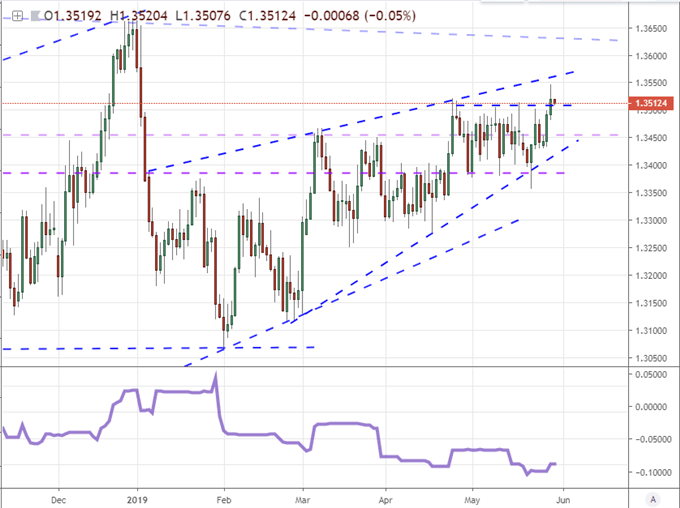 If you are looking for an easy follow through for USDCAD, you may be surprised by the market's lack of enthusiasm. That will be a universal setting to contend with. For the Euro, the European Central Bank (ECB's) financial stability report mentioned international fears like expansion of trade wars, the troubled health of emerging markets and Brexit negotiation troubles as sticking points for the local economy and beyond. Closer to home, the Italian fiscal pressure and asset managers' excessive use of leverage was a stark reminder that threats were not isolated to foreign influence. This situation was enough to push EURUSD to its two-year low but not overt enough to push us into new territory. Finding resolution to this fundamental uncertainty may take some time so seeing allowance for a clear drive from this benchmark may also find delay. 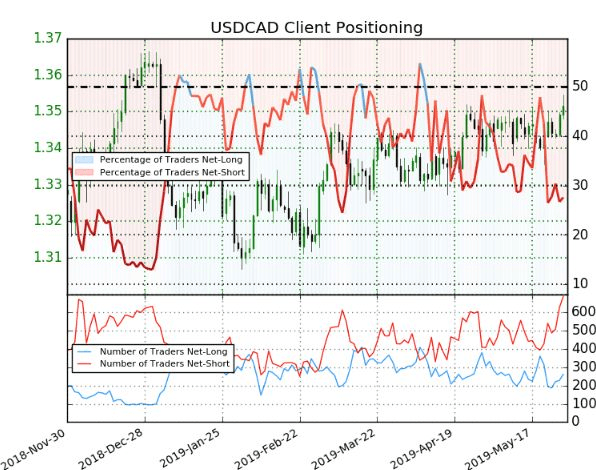 That may provide a similar situation for the British Pound and Australian Dollar as well. The Sterling is looking for developments like the new Tory leader, the end to Parliament's recession, the next Withdrawal Agreement push and a loose threat to revive the Scottish referendum. Next week the Reserve Bank of Australia (RBA) decision is facing an exceptional probability for a rate cut. It will be difficult to move the Pound or Aussie with this looming, but that in turn will make for a troubled indirect environment for the Dollar to catch meaningful traction. Anticipation can - and has - proved a defining feature of the landscape and it can do so again. we discuss all of this and more in today's Trading Video. 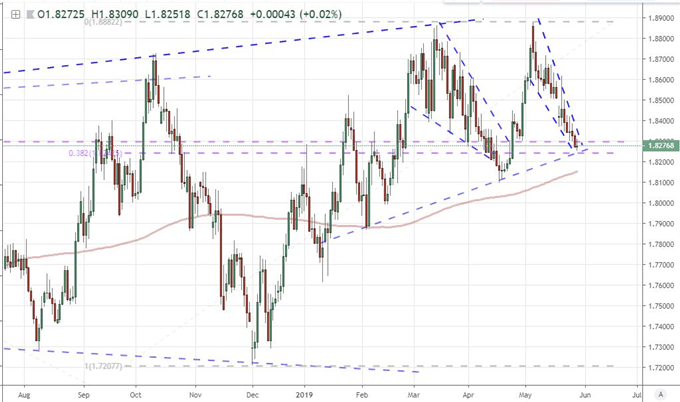