The S&P 500 and US Indices are Due a Break, Follow Through is Another Matter

We are wading into deeper and more tumultuous fundamental waters through the back half of this trading week. While the trade wars (particularly the engagement between the US and China) remains the most capable and active systemic theme to mete out market movement, there is potential for key developments in other channels of critical financial and economic influence that could finally trigger larger swings than the small range checks and false breaks we've had to navigate lately. A strong shove in sentiment would be welcome for most traders as despite the persistent lack of direction from the market, there is an overbearing sense of tension through value, stability and exposure. In a technical sense, things are coming to a head - at least in the short-term. The past week has seen the amplitude of indecisive swings diminish even as the fundamental risks have pressed ahead. In layman's terms, that has resulted in quite a few wedge formations among the different benchmarks of risk appetite.

The most prominent risk asset type in my book are the US equity indices. The S&P 500 represents the group well with a 'terminal' pattern that is essentially out of room to maneuver. If the markets are very quiet over the next 24 hour hours, we may keep to the quickly closing technical bounds. That said, even a standard level of activity could force a 'break'. Yet, the clearance of support or resistance in this case does not guarantee much in the way of follow through. Those that have been keeping tabs will have seen the instance of breaks that stall immediately after the breach far outnumber those that have found some measure of trend to back the promising spark. There is certainly a bias in terms of potential (bearish) and probability (bullish), but momentum will depend heavily upon more directed and unsettling motivation than we have seen as of late. 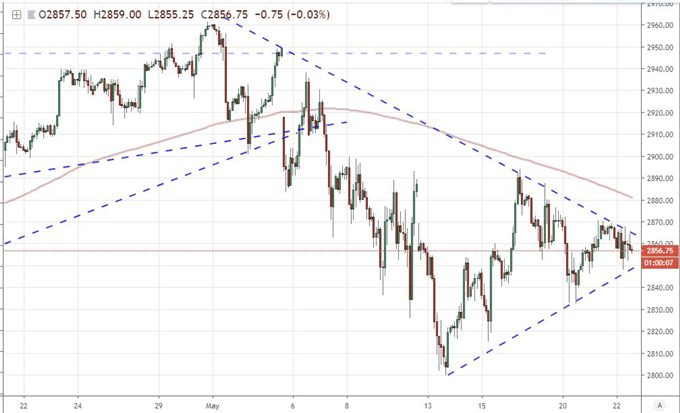 Political Risk and Global Growth Will Garner Headlines and Perhaps Volatility, But Trend?

Taking stock of what could feasibly escalate volatility to full-blown trend, there still exists a primacy in trade wars. With the Trump administration delaying the decision on auto tariffs up to six months and the USMCA discussions starting back up after the metals tariffs were dropped, the focus is fully on the reciprocal actions between the United States and China. Since the escalation of the tariff rate from the two over a week ago, we have seen less dramatic but equally consequential efforts taken through subsidies and strategic restrictions. On the heels of its controversial ban of China's leading telecommunications conglomerate Huawei, the US is reportedly considering blacklisting five Chinese surveillance companies. For its own part, China is responding to the United States' reported discussion of subsidies to its struggling farmers with tax breaks for its own integrated circuit makers and software companies. As USDCNH continues to menace the closely-watched 7.0000 mark, it is worth watching less managed measures of market health. USDHKD is a good complement but AUDUSD harbors none of the distortions of the direct benchmarks.

Chart of USDCNH and USDAUD (Daily) 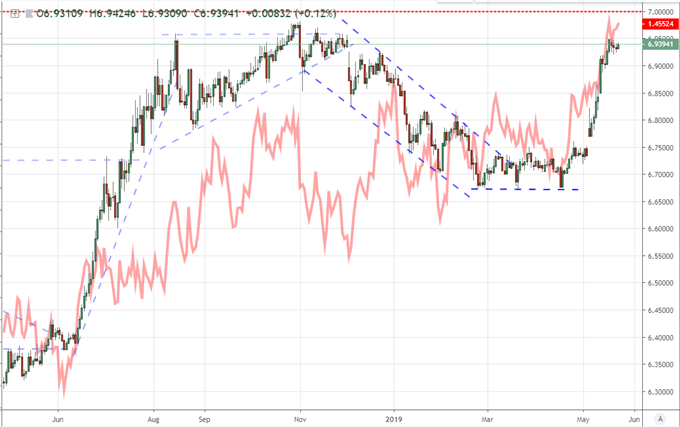 As we live headline-to-headline on trade wars, there are more discrete events scheduled around political risks and the course of global growth moving forward. Updates on economic activity will be the most prominent feature of our forthcoming landscape. Following the troubled OECD forecast (downgrade to 3.2 percent growth and a halved business investment forecast), robust Japanese 1Q GDP update and pained Chicago Fed US national activity report, we are due a tangible and broad update on the global economy. May readings of economic activity for Japan, the Eurozone and the US are due today. The PMI figures have a strong correlation to official quarterly GDP figures and these priority readings are clearly timely. Individually, this data is unlikely to generate strong moves for local assets; but collectively, a strong or weak showing can generate a broad speculative market response. To be clear, I am of the mind that a stunted reflection of the global economy could generate a far larger slump than an equivalent 'beat' could a rally.

Political risks deserve their own fundamental appreciation. The weight of the European Union elections, the UK government's struggle with Brexit proceedings and Japan's navigation of the trade wars creates numerous fractures. However, the United States seems to have some of the most consequential pressure of the majors. The pressure on US President Trump through the Special Council's probe and the House of Representatives drive for his financial records has pushed the White House to pull back its effort to move forward with a potential $2 trillion infrastructure spending program. That fiscal stimulus package is one of the very few options to genuinely fight unfavorable tide changes in global sentiment, so the risk of its failure carries serious consequence.

Dollar, Euro and Yen Have Reason to Struggle While Pound and Aussie Extend Bear Trends

Heading into the Thursday session, there are more assets that will struggle for traction than those that will present a clear bias to exploit for trading purposes. The Euro is perhaps the most misleading benchmark currency. On the traditional data front, we are not lacking for highlights. The Eurozone PMIs are good for economic sway, but the German business sentiment survey will assess systemic risk and the ECB monetary policy meeting minutes will set the stage for a failed normalization of extreme easing. Ultimately, the EU Parliamentary elections is top concern and that will be a drawn-out event risk through Sunday. It is unlikely the market will interpret the implications of this vote in advance given the depth of its influence. That means the Euro may experience bouts of volatility, but it will struggle to develop clear trend. In a similar vein, a lack of commitment to risk trends will see the Yen and its crosses unwilling to follow clear trend. 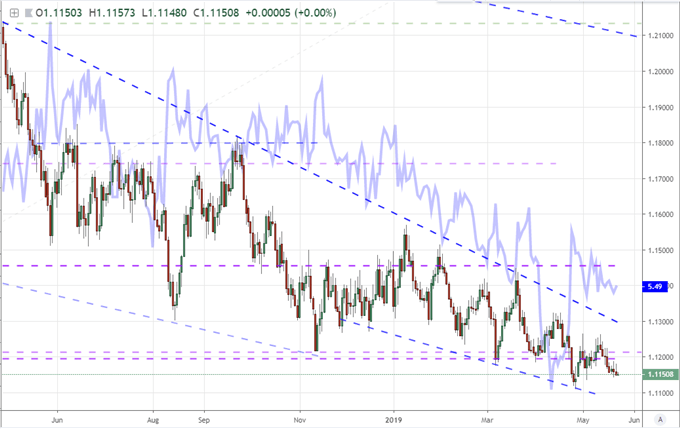 If two of the most liquid currencies are unable to commit to a robust course, I would net set expectations for the US Dollar to miraculously forge its own course. The FOMC minutes this past session reinforced the central bank's effort to cool the market's dovish expectations, but that didn't afford any relief rally for the Greenback. US PMIs carry some weight but not a greater influence than the currency's role as a top liquidity provider against motivated counterparts. Just as readily as the Greenback would exploit a universal drop in key counterparts (with a rally) anchored alternatives will stunt the Dollar's progress moving forward. 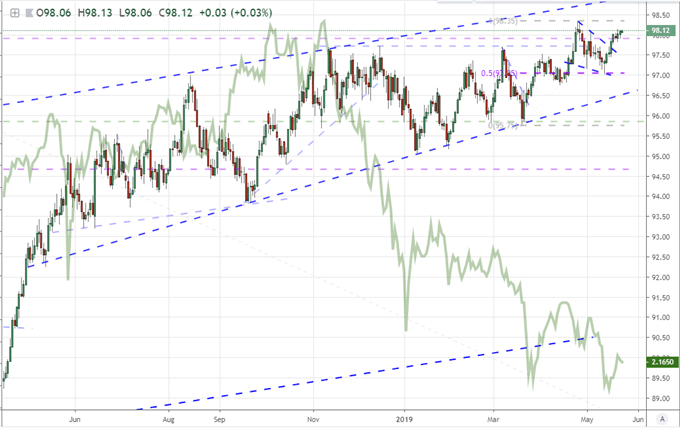 Not all of the majors seem destined to spin their wheels. The British Pound has suffered a remarkable slide of late. Through Wednesday's close, the Sterling posted a 13th consecutive drop against the Euro to further the already-record stretch. The news out of the UK was stark. UK Prime Minister May's plan to muster support for her Withdrawal Agreement hit a wall despite offering a second referendum option for Labour as her own party railed against her solution. Speculation of her near-term departure from the seat of power has swelled but reports that the resignation was essentially at hand were once again beat back. If she meets speculation in the upcoming session, plenty more volatility is owed to the Sterling. If a solution is not offered, a relief rally will be troubled by the anticipation of the EU Parliamentary elections implications for the UK. Another loaded currency with strong potential to move but equal risk of a ominous lurking owing to fundamentals is the Australian Dollar. The perception of Chinese health may not reflect well through USDCNH or the Shanghai Composite, but AUDUSD is a market-determined exchange rate. We discuss all of this and more in today's Trading Video. 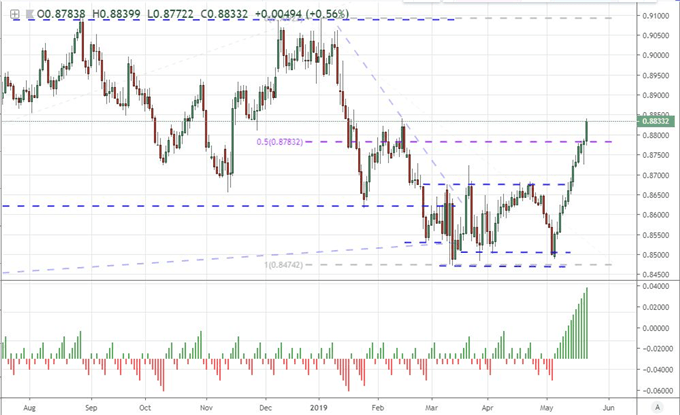