If were were keeping a tally on the progression of the global trade wars, the pain side of the ledger would certainly be gaining serious ground over the troublingly anemic list of improvements. Nevertheless, it seemed the market would cling to the small wins this past session to offer a broad nudge higher in risk-leaning assets. For the S&P 500, Tuesday began with the biggest bullish gap since April 1st - a welcome contrast to a record of nine drops to open trade over the past 11 active sessions. Yet, this strong start notably lacked for momentum in any meaningful follow through, leaving the index with yet another terminal wedge that slows progress and reloads unrealistic hope for a productive breakout with follow through. This morsel of speculative interest wasn't simply relegated to the US indices. The 'rest of world' equity measure (VEU) offered a very similar pattern - significantly lower than the proximate record highs the S&P 500 hovers around - while emerging markets, junk bonds and carry trade via Yen crosses all notched modest gains. Breadth is important when evaluating the influence of speculative appetite, but conviction is the other piece to that equation and we are seeing very little of that at the moment. 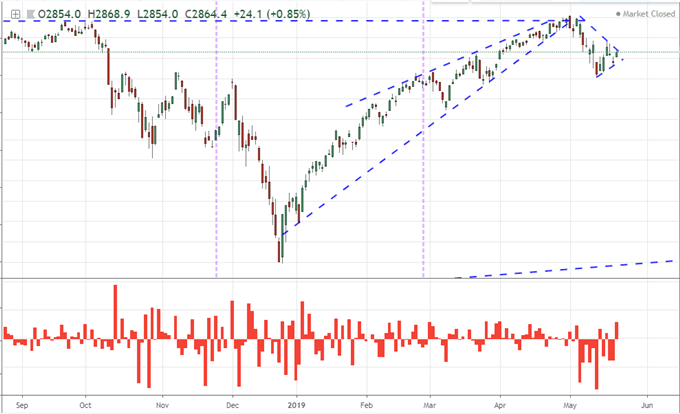 Where was the market finding its measured enthusiasm this past session? Trade wars are far from a full resolution, but discernible improvement can still exert more influence than many may suspect. In the aftermath of the United States tariff hike on the $200 billion in Chinese imports it taxes and China's subsequent retaliation, the most remarkable development has been the White House's ban on the supposed state-owned telecommunications firm Huawei. That maneuver was a clear political shot across the bow, so there was a raw of hope working its way through the clouds this past session when the government said that existing American business relationships with the company would have a 90-day reprieve to continue business. I tend to believe this has more to do with avoiding unnecessary fallout for American businesses, but the market seems to also register this move as a sign that negotiations are possible. In the meantime, Chinese President Xi made a highly publicized visit to rare-earth material producers likely as a warn as to where the next trade escalation could come from and the leader warned his fellow countrymen and women that they should prepare for a "new Long March, and we must start all over again!". Meanwhile, the US seems to be making corrective moves to shore up its fight with reports the Trump administration is considering subsidies to American farmers to the tune of $2 per bushel for soybeans, $0.63 for wheat and $0.04 for corn.

Chart of USDCNH and Huawei in Blue (Daily) 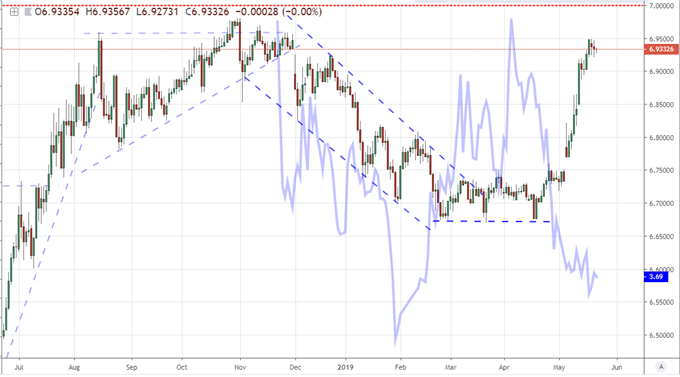 Before we grow too optimistic about the state of trade going forward, we should take account of the increased warnings from data and by trade groups recently. Alongside its update on growth forecasts, the OECD issued a clear warning about the significantly negative impact that ongoing trade wars could pose to the global economy - not an uncommon assessment. As the pressure mounts, industries are increasingly lobbying for relief from the idealistic governments. A host of apparel companies - including Nike, Adidas and Under Armour among others - issued a plea to the administration calling on an exception for footwear, warning the cost to Americans could be 'catastrophic' ($7 billion per annum in their estimate). Seeing the writing on the wall, auto manufacturers are not resting on their laurels for the six month pause before President Trump considers taxes on imported automobiles and parts again. An industry group headed by the JAMA - Japanese Auto Manufacturing Association - ran statistics to suggest how much investment and how many jobs their companies have brought to the US over the past decade. We will see if the data budges this dedicated administration. 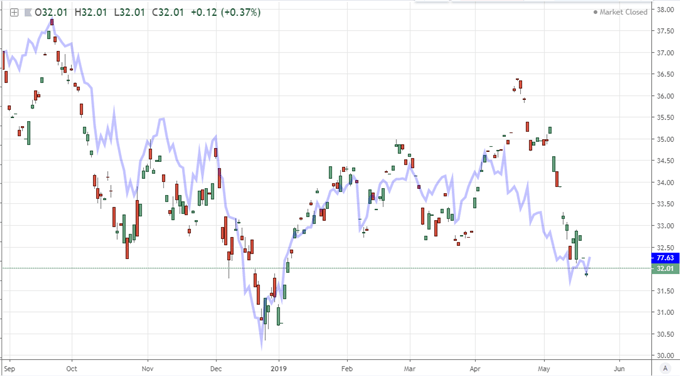 Trade wars is the most loaded theme to carry weight over the market, but it isn't the only threat on the horizon for which traders are keeping track. Economic potential is still the endgame when it comes to the risk and potential of these various developments. Following the impressive showing for the 1Q Japanese GDP release and the poor numbers from the Chicago Fed's national activity index, the OECD offered an update for the global economy. The supranational group downgraded its outlook from 3.3 to 3.2 percent expansion and sharply downgraded the business investment outlook from a previous 3.5 percent pace to 1.75 percent. The two largest participants in the trade wars received downgrades for growth of their own - US to 2.8 and China to 6.2 percent - while their subsequent 2020 projections were even slower. It comes as no surprise that trade wars were afforded more than their fair share of the responsibility for the economic struggle.

As the economic bill through troubled GDP accumulates with time, there is a more dynamic threat to account for in political risk. This is not easily defined as events such as trade wars general fit this open-ended category. Yet, there are unmistakable aspect to this dynamic threat that should be monitored more closely for the inordinately expansive threat they pose to the global order of the global financial system. The OECD mentioned the infrastructure spending program the US has floated at different times in the recent past as a recommended source of growth for the world's largest economy, but the tension between the Executive and Legislative branch puts that effort in serious peril. From unrealized support to outright risk, the threat of open engagement between the US and Iran continues to nudge closer each day. The later country's foreign minister this past session said that the country wont restart dialogue with the US until the country 'respects' Iran - or more pointedly the nuclear treaty that collapsed between the two. Despite the disruption this threatens in supply, crude oil prices have not charged higher on the back of this news. It seems the abundant supply fueled by record production in the US and the output from OPEC is enough to check against fading growth forecasts for demand. 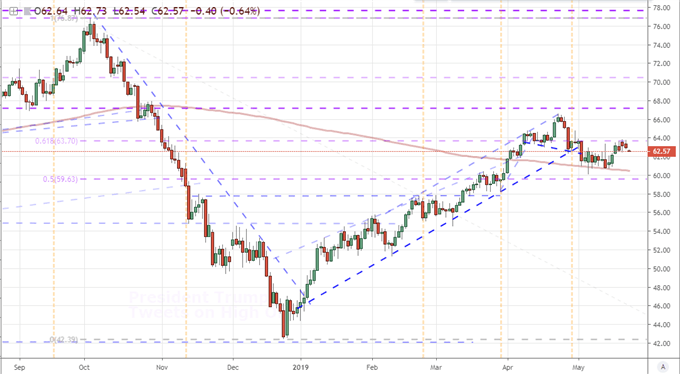 An Effort at Brexit Breakthrough Generates Pound Volatility, A Study in Fundamental Priority

One of the most remarkable examples of volatility this past session would come on behalf of the British Pound. The currency sported an inordinate amount of intraday volatility and ultimately completed an aggressive round trip on the day. The result was a sustained trend from GBPUSD and GBPJPY, but the real standout was EURGBP. After the short-lived correction for the pair (recovery for the Sterling) sputtered, a large bullish wick formed on the daily candle and it ultimately ended with a record-breaking 13 consecutive trading days of advance. Interestingly, despite the unexpected contribution from the last two days, there has been no definitive break above the technical resistance pulled from the midpoint on the 2019 range. The spark for the volatility was UK Prime Minister Theresa May's statement that she would support a second referendum vote if MPs supported her Brexit plan. Both leadership from the Labour and ERG parties rejected the proposal. 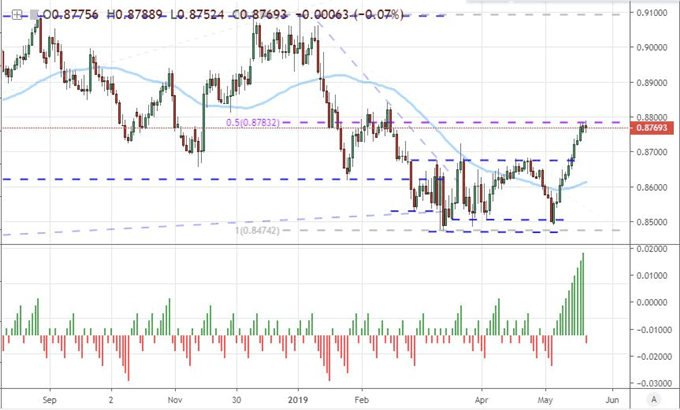 If you suspect the Pound to simply take the news and extrapolates a strong sustained bear trend, be mindful of the anticipation surrounding the upcoming EU Parliamentary elections. The UK's participation in this event speaks to the state of the divorce proceedings and the strategy of the government to rouse support will depend on this event. Yet, the implications may prove far more significant from this vote for the Euro. The rise of nationalist support in the polls threatens to solidify the anti-EU and anti-Euro sentiment to something on the level of true economic weight. If there is a clear anti-Euro wind to come in the results of this event, the threat to the shared currency (the second most liquid in the world) will be unmistakable. Few developments would drive EURUSD to parity more quickly. Wait-and-see is the tempo most appropriate for the likes of the Pound and Euro and that is likely to decide the Dollar's fate as well. The Greenback is far less influenced by its own fundamental measures - growth, Fed forecast, even trade status - which leaves its indirect status as the benchmark liquidity alternative as the principle driver. We discuss all of this and more in today's Trading Video. 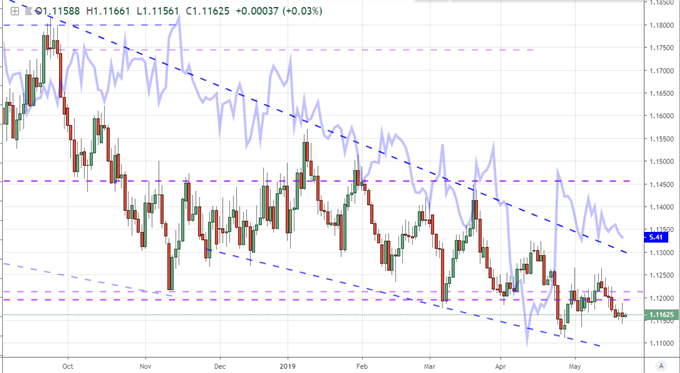