There was no small sense of surprise for many through the end of this past week when reports of 'breakthrough' on certain fronts of the global trade war failed to trigger a relief rally for the speculative benchmarks. It seems a weekend of reflection wouldn't thaw that reticence any further. In fact, we opened the new week with speculative appetite on a backfooting with hesitation for most and an explicit squelch of pain from equities. The US benchmark indices opened Monday with another gap lower - the S&P 500's drop from previous session close to new day's open matched the slump on Friday. Equities retain more speculative premium relative to many other key risk assets, and the United States indices in particular maintain the greatest advantage among global shares milestones. This may be a cause of excessive risk exposure bleeding off, or it could reflect a market with a unique exposure to the chief fundamental risks moving forward. While both scenarios are plausible, I am of the mind that the former is more likely. That says something of the motivations of our markets. Watching for trade war updates may stir volatility, but it will struggle to generate trends if the market is not simply waiting for a cue on the theme. Alternatively, should momentum build behind a broad effort at 'de-risking', the abstract concept could place sheer speculative drive at the helm of systemic trends. 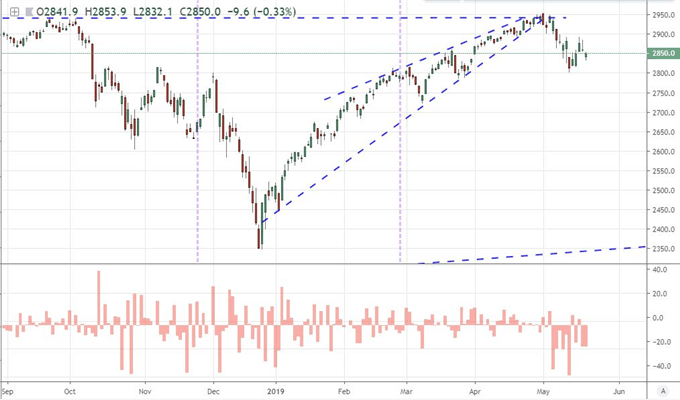 Regardless of whether the market moves forward with systemic bullish or bearish trends via collective speculation or behind the banner of an overt fundamental theme, we cannot afford to ignore the fundamental sparks as they ignite in the open market. As it stands, trade wars still poses the most pervasive and costly threat to the global economy. From the developments that could be labeled 'relief' from last week, there was still as little favorable market response for the assets more directly exposed to the headlines as from the broader 'risk' benchmarks themselves. The Canadian Dollar and Mexican Peso were still spinning their tires against the Greenback Monday, maintaining remarkably contrite ranges to bounce around. Meanwhile, the deferred decision by the Trump administration on auto tariffs translated into no significant lift in the Euro. What is far more surprising is that the reprieve didn't prevent a drop from the DAX German equity index and German auto-manufacturer BMW continued its tumble lower. That isn't to suggest that auto tariffs are the only risk that requires evaluation, but it is arguably one of principle concerns at hand. 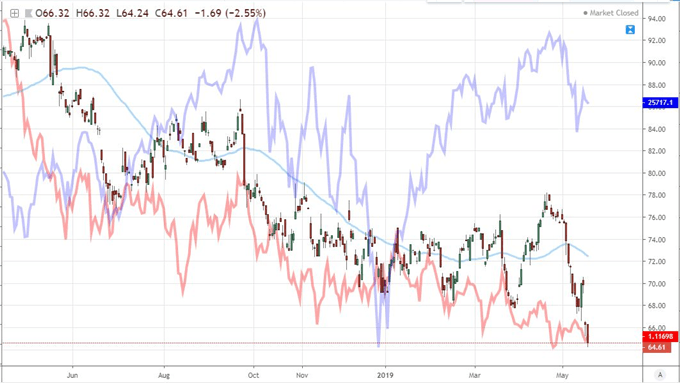 It seems the speculative compass continues to favor the mood in US-China relations. There were no overt escalations to the trade war tab like there had been the past week - the US raising tariffs on $200 billion in Chinese imports to 25 percent on May 10th and China matching the tax rate on $60 billion in US goods on May 13th. However, rhetoric was clearly souring between the two. President Trump tweeted that there would be no 50-50 outcome in negotiations while China accused the US negotiators as harboring extravagant expectations' and was in no rush to restart talks. In the meantime, the actions to ban Huawei in the US were keeping the company's shares to bear trend while industry groups started to use the label of a 'tech cold war'. A new industry has requested exclusion from the Trump tariffs: apparel companies asked the White House to keep footwear off the list. As we keep tabs on general risk benchmarks, it will also be important to monitor USDCNH as it menaces the politically-important 7.0000 level. 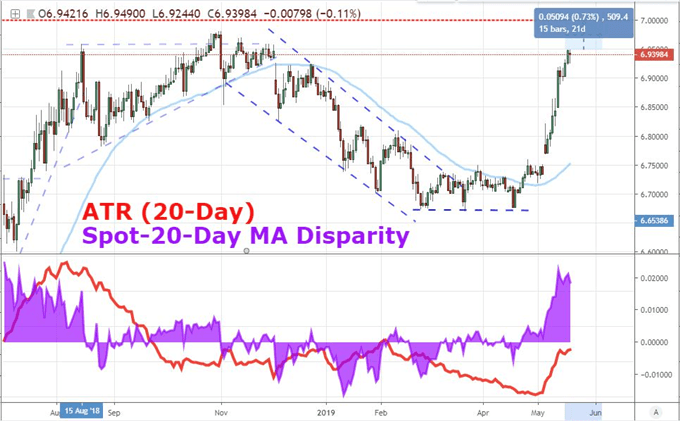 While there are different prevailing fundamental winds that will compete for market influence, there is little probability that these cross currents will shift the weight to a competing theme. That said, there is a strong probability that these significant developments can amplify the charge that we manage to generate. Sheer economic activity is a theme that is bound to draw significant attention this week. Thus far, the picture is mixed. Japan's 1Q GDP update offered thwarted fears of recession with a robust 0.5 percent quarterly expansion that contrasted to the -0.1 percent contraction forecasted. Similarly, the annualized reading registered 2.1 percent growth against a -0.2 percent showing. How enthusiastic we should be in this reading given that consumer spending and business investment floundered which left a much weaker imports growth than export to do the heavy lifting is up for debate. For the United States, the Chicago Fed's National Activity Index for April was unambiguous in its poor showing with a -0.45 versus -0.20 forecast. That does not support the outlook for an economy hosting a strong 1Q figure but struggling for sustained sources of growth moving forward. Ahead, the OECD will offer up an economic forecast Tuesday during European hours which will spur speculation for Thursday's PMI figures from Japan, Europe and the US.

Another more open-ended fundamental risk in our immediate future is the scope of political risk across the global spectrum. Faltering diplomatic relations between the US and China certainly count for this category as do the impending EU elections. That said, there is more nebulous risk at play in the form of the growing threat between US President Trump and Congress. The latter is pressuring the former on financial information, testimony from his former staff and leveling threats against his family (son-in-law). There is high political drama to draw from this situation, but the economic implications are increasingly overlooked as the chances for infrastructure spending are increasingly jeopardized. Perhaps the most intense risk in this vein at present is the threat that a cold economic war between the US and Iran turns into a 'hot' military engagement between the two. Despite the frayed nerves and the contribution to troubled risk trends, oil prices are notably in check. Should this situation escalate, however, don't expect the market to remain so detached.

As we reach stronger fundamental developments moving forward, it is worth assessing what has greater potential for sheer (short-term) volatility and what is capable of hitting escape velocity on trend. The Euro has made a feeble effort to generate a clear trend with just the Eurozone and Italian current account balance figures to generate movement. Both series beat expectations significantly, but that does little to draw our attention away from far more systemic issues at hand. Thursday brings the start of the EU Parliamentary elections which threaten to further destabilize confidence in the shared currency already drawing fire from Italy's anti-EU stance. Consumer confidence in the session ahead, Wednesday's Draghi rhetoric and even Thursday's PMIs are unlikely to draw our attention away from this systemic influence for too long. 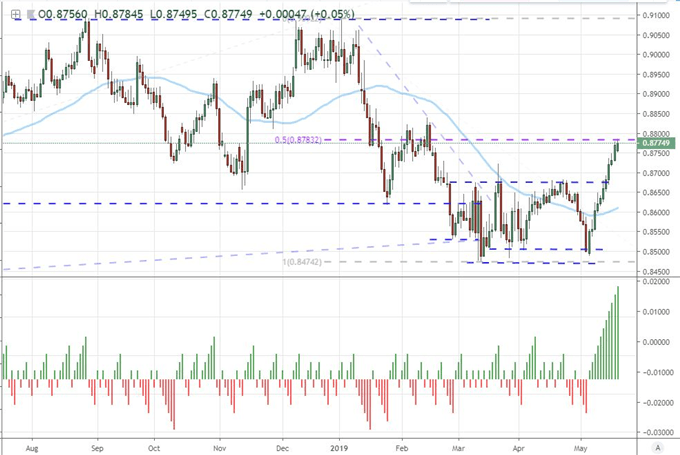 The situation for the Pound is much the same. The Sterling has extended its slide to an 11th consecutive daily loss on an equally-weighted basis. That is an extreme move for the currency as it has only seen one other such move of that magnitude on the bearish course some 12 years ago. Here too, there is interim event risk to keep track of in the form of the Bank of England (BOE) member rhetoric and the upcoming inflation data, but that will seriously struggle to distract from the implications of the same Parliamentary elections on the UK. Having had to extend the Article 50 cut off for the Brexit, the United Kingdom was forced to participate in the elections, leveraging discontent to even greater heights. If there is serious concern that the UK will come out of this event with even stronger pressure for an 'exit at all costs' (no deal), the Pound could absolutely lose more altitude.

Far more limited in their respective volatility are the Australian Dollar and Bitcoin. The commodity currency offered up a remarkable surge to start the new trading week. The bullish gap for the equally-weighted measure was the largest since February 2016 while the ASX 200 similarly received a boost with a push to highs only overwhelmed by the records set back in 2007. The spark for this bullish view was the news that the Australian Federal election had settled with the government leadership unchanged. Markets prefer the status quo, but that doesn't mean they can leverage that comfort to dynamic trend development. Australia is still beholden to commodities and China for its future. A similar, serious caveat has to be applied to Bitcoin. The cryptocurrency has drawn remarkable attention fr the extreme volatility of the past week. That level of activity has not come with any meaningful promise of trend, so tread carefully. We discuss all of this and more in today's Trading Video. 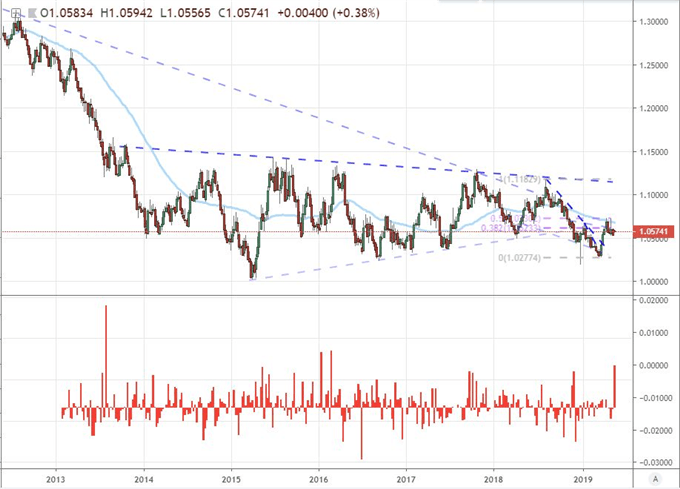