Both the US equity market benchmarks and the Dollar find themselves in technically compromised positions following two weeks of failed attempts at trend development. It comes as little surprise that the markets would commit to a clear course through Friday given the mix of sentiment to be derived from the unconfirmed and often contradictory fundamental winds that we keep tabs on for market guidance. Following the whiplash the markets felt Wednesday between the Fed's statement that seemed to acquiesce to a growing dovish bent and Powell's 'hawkish' remarks about inflation constraints being 'transitory', a host of Fed officials seemed to build the dovish case back up again Friday. James Bullard - one of the most dovish in the Fed - said a cut could come if inflation remained lower after the summer. We have a range of Fed speakers in the week ahead, and recent response to chatter suggests it is worth keeping tabs. 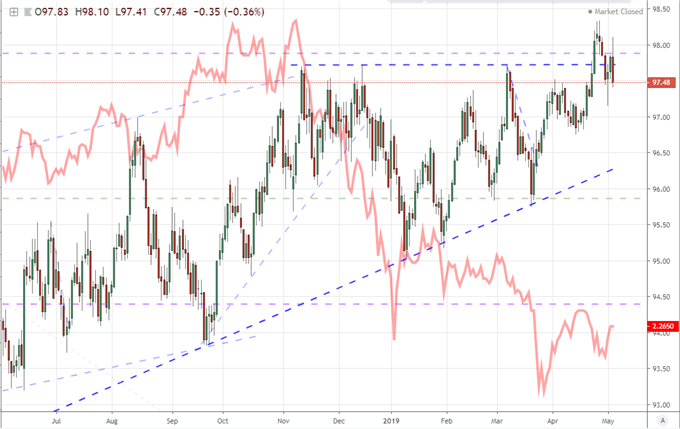 Yet, on the monetary policy front, the employment data Friday seemed to offer the central bank more than enough reason to hold its rates steady. The change in NFPs for April beat expectations (263,000 vs 190,000 expected), the jobless rate dropped to a six-decade low 6.3 percent and wages (the inflation component) held steady at 3.2 percent. If you intend to watch specific measures that can shape the Fed's influence moving forward, keep tabs on inflation measures which would be the prompt for hikes (if they are running hot) and market volatility for cuts (as financial instability risks most unwieldy threat to economic health). Speaking of growth, the ISM service sector activity report cooled a little of the residual enthusiasm following the US 1Q GDP beat when it slipped unexpectedly - though the 55.5 reading is still firmly in growth territory. Trade was another mixed point as the $71.4 billion deficit was smaller than expected but still an escalation of amid trade wars.

Chart of US Unemployment Rate and Russell 2000 Equity Index (Monthly)

Looking out over the US docket, there is significantly less of the event risk that could single-handedly direct the US and global markets to rise or fall. That is problematic from a trading perspective because both the DXY Dollar Index and S&P 500 experienced failed bullish breakouts to two-year and record highs respectively. What could have fast tracked aggressive, bearish reversals subsequently fell apart in the lead up to this past Friday's event risk. The potential for fielding clear direction and generating speculative momentum between technical cue and fundamental charge has fallen apart. Without another lightning rod for conviction, it can prove difficult to re-engage a move in either direction. That could ironically put sentiment itself back in charge of the next stage. We have seen plenty of instances in the past where risk trends inversely scrambled fundamental interests. The most recent example of this inverse influence is the collapse in risk trends through the fourth quarter of 2018 where the accelerated collapse in turn stirred fears of a subsequent recession and the limitations of the world's largest central banks. 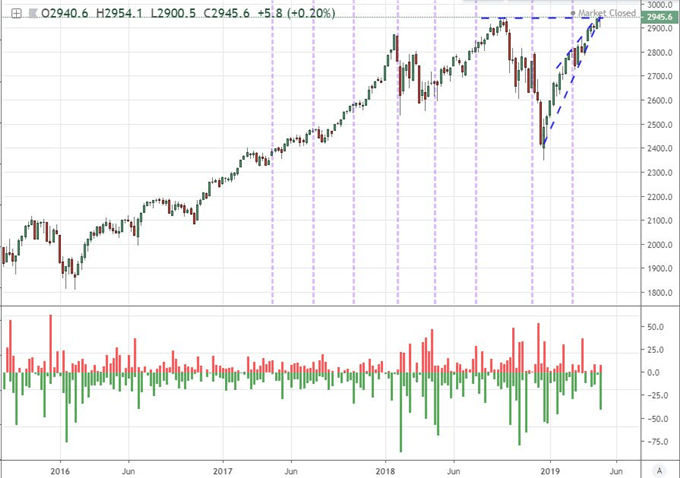 High-Potential Events Give Way to Influential but Unscheduled Themes

As we move into the new trading week, there is a range of event risk that could reasonably be expected to generate volatility for local currencies with the rare flash of global influence. However, the potential for a systemic wave developing from any of these fundamental points of influence is low. Instead, my focus moving forward will shift back to the open-ended systemic themes. Whether or not the global economy is due to hit stall speed is perhaps one of the most consequential issues, but it is also the one with the fewest explicit milestones moving forward. The UK 1Q GDP figure is an official data point, but references to growth forecasts (as with the EU Commission) will carry greater weight. My principal concern on the matter will be any headlines regarding the $2 trillion US infrastructure spending program which was referenced this past week following the meeting between President Trump and the Democrat leaders from Congress. Their next meeting was supposedly set two weeks into the future, but headline-based remarks can come at any time. Monetary policy is another theme is serious consequence without a clear time frame - and perhaps not even an obvious source. The Australian, New Zealand and Brazilian rate decisions over the coming week will carry limited impact of their own. The true heft of this theme is against winds of economic and financial pain that expose the limits these groups are already facing.

If there is any singular theme of both exaggerated influence and meaningful potential to keep tabs on, it would be the progression of trade wars. Though there hasn't been an explicit date set out by officials, there has been multiple references by unnamed sources (which is no doubt strategic staging) as well as White House Chief of Staff Mulvaney to a decision on US-Chinese trade 'one way or another' come the end of this next week. Reports that President Trump is willing to soften demands on intellectual property to secure a practical deal makes sense as a standard playbook maneuver to secure market health and stage a campaign platform for the subsequent Presidential race. Though officials have not made express intentions by Friday, the market is sufficiently vested such that no breakthrough will likely lead to some concern and speculative retrenchment. Meanwhile, don't forget some of the other open-ended risks to a spread in trade disputes to the developed world. The US Congress has raised barriers to the USMCA deal, looking for the withdrawal of metals tariffs the US raised to result in the retaliatory taxes to be removed. Trump has issued warnings of two direct tariffs against the EU - retaliation for Harley-Davidson's earnings struggle and an $11 billion tab in response to Airbus subsidies - but there is no guarantee these will be pursued. My greatest concern is the risk that a blanket tariff could be placed on imports of autos and auto parts, with the President due to weigh in on the Commerce Department's findings by March 15th - though one option is to extend the decision period 180 days. 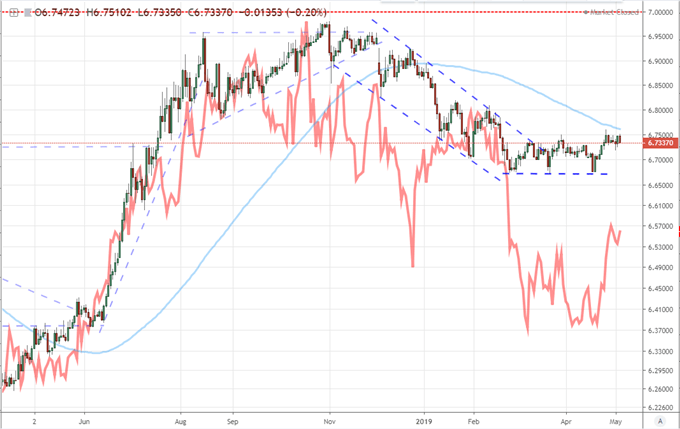 Volatility Highlights for the Euro, Pound, Aussie and Kiwi Dollars

Outside of the systemic, there are certain regional considerations that FX traders should keep track of. For those wading into the Dollar, we have returned to the situation whereby the Greenback is more likely to act as the counterpart to more motivated benchmarks than to take command of its own fate. That should set expectations of a clear trend intent from the DXY. Looking to the second most liquid currency in the market, the Euro has more consequential updates than its US counterpart. Following this past week's 1Q GDP beat and unexpected acceleration in inflation pressures, the picture will grow more systemic in nature. The Eurozone sentiment survey from Sentix will weigh grander issues like recession and anti-EU sentiment. The EU Commission's economic forecasts will be watched carefully, and the informal EU leaders meeting should not be overlooked.

The Pound is another currency of consequence. This past week, the Sterling (on a trade weighted basis) posted its biggest week's rally in three months while GBPUSD leveraged its biggest single-day move since March 13th. The charge through week's end was political - and thereby Brexit - oriented. Local elections proved a clear rebuke to the major Conservative and Labour parties, suggesting the government would read the message of discontent among voters and hasten a compromise on the EU withdrawal. That is expecting perhaps too much. Ahead, the focus will be more simplistic. While there are some noteworthy, economic readings, the 1Q UK GDP is clearly top listing. The problem for traders is that the Friday release can prevent market movement in the lead up and offer a lackluster impact in twilight Friday hours. 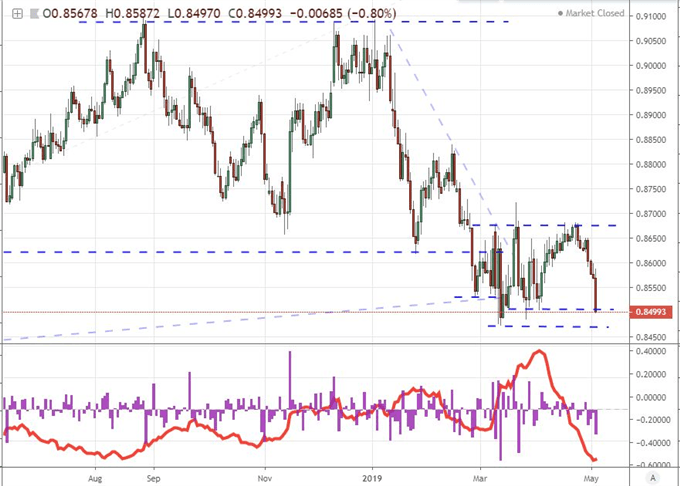 For the most concentrated volatility potential amongst the 'majors', I will look to the Commodity Bloc. The Canadian Dollar has exposure to trade issues through the USCMA, but the Canadian trade figures and week-ending employment statistics are more reliable sparks for price action. The Reserve Bank of Australia (RBA) and Reserve Bank of New Zealand (RBNZ) rate decisions on tap can readily charge movement from the Australian and New Zealand Dollars respectively. Given their position as wayward carry currencies and the response to slight changes in rhetoric recently, watch the loaded pairs from AUDUSD to AUDNZD to NZDCHF. We discuss all of this and more in this weekend Trading Video. 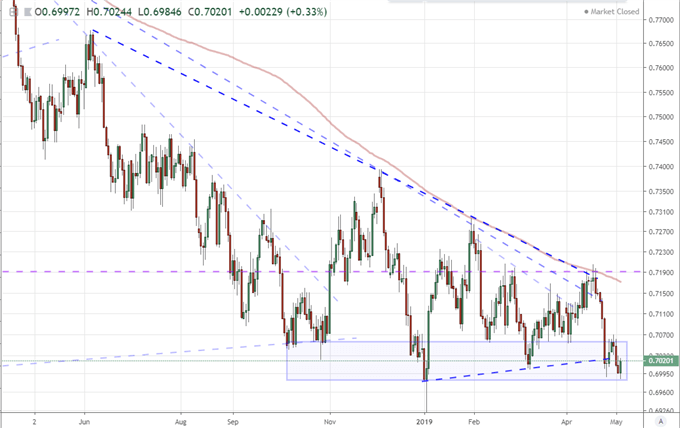