What do the DailyFX Analysts expect from the Dollar, Euro, Equities, Oil and more through the 2Q 2019? Download our trading guides for the FX majors, key indices and commodities on the DailyFX Trading Guides page.

The range of systemic themes that we have kept track of these past months were present for fundamental influence this past session, but it was clear where the market's attention was focused. The Federal Reserve's (Fed) policy decision proved remarkably market moving, but the real question is how much follow through we can reasonably expect following an event that technically produced no change in policy nor even a serious surprise in forecasts. Following its two-day meeting the Federal Open Market Committee (FOMC) announced that it was leaving its benchmark rate range unchanged between 2.25 and 2.50 percent. Its more unorthodox efforts were similarly untouched. The market was prepared for this status quo and quickly turned to the statement that accompanied the announcement. Its language was very similar to what we had registered previously with recognition of soft inflation, concerns about external pressures and acknowledgment of soft growth. At this point, the market was content with extending the prevailing winds: tentatively bullish risk.

In speculative terms, no change to the forecast would passively support the speculative charge drawn from the growing anticipation of a rate hike into the future. That confidence would falter however little more than half an hour later when Fed Chairman Jerome Powell conducted his press conference. If you aren't a close Fed watcher, the signal could have been too subtle to pickup, but the reference to the soft inflation data as of late as 'transitory' and 'transient' was a spark for the over-extended speculative market. It suggests that the Fed is not as confident of an impending cut as the market had become. We would see the reaction in Fed Funds futures which cut the probability of a 25 bp cut by year's end from approximately 66 percent to 52 percent. In market terms, that would lead to a broad drop in risk assets. 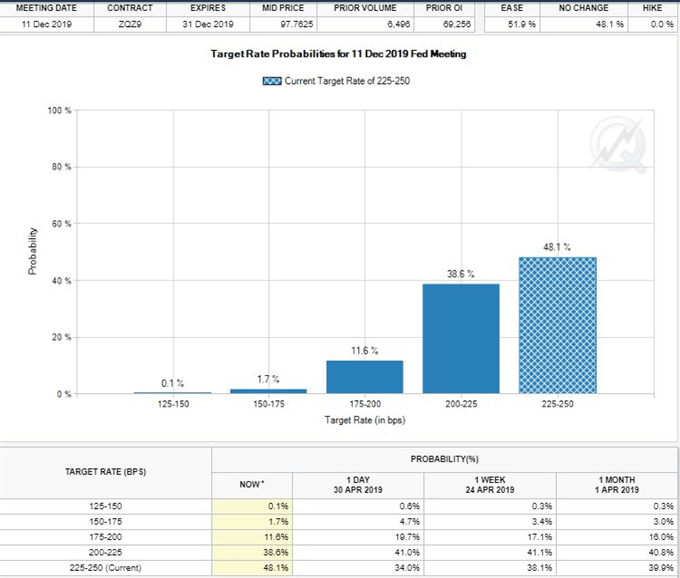 Emerging market assets, junk bonds, carry trade, yields and more wavered with the recognition. Yet, it is the S&P 500 - and US indices generally - that is truly of concern. What started as a gap higher on the open Wednesday to record highs ended as a tentative break of the rising trend channel that stretches back throughout 2019. There is potential for this turning into a false breakout reversal pattern is material. However, I wouldn't put that outcome on follow through from the Fed's influence. Rather, if a reversal does set in, it could very well arise from the sheer weight of speculative overindulgence in this particular benchmark - collapse under its own weight. Be wary and prepared but not expectant. 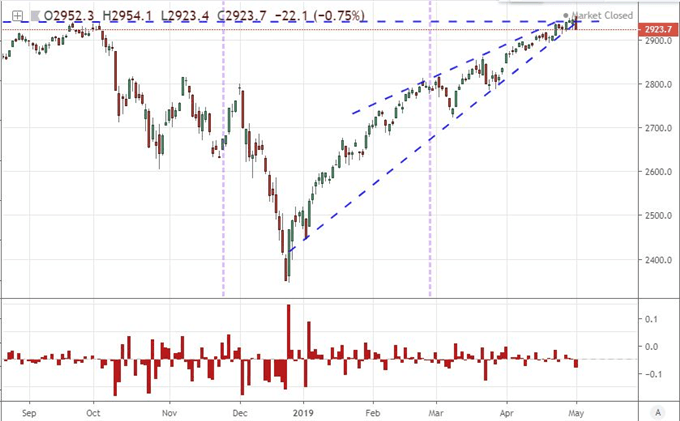 From Where Will the Dollar Draw Its Motivation Now?

The Fed's distancing itself from a rate cut is a short-term boon for the US Dollar as it both caters to the currency's yield advantage (for whatever that is worth) while also signaling that the Fed doesn't believe threats like trade wars or economic lethargy should be taken too seriously. There is certainly value to the be found in this event's turn, but follow through is likely to be seriously truncated. The carry trade advantage that the Greenback holds over major counterparts is historically minuscule and would require a fairly deep level of complacency and/or extreme sense of risk appetite to leverage into a serious climb. So, while the Dollar managed to steady from a multiday tumble and EURUSD returned to its previously critical 1.1200 support, follow through will likely have to draw from a different well. 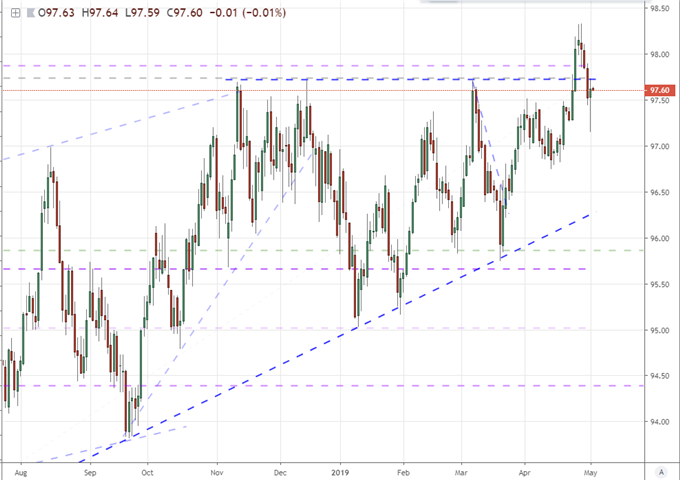 Among the other systemic themes, the earnings season has likely rendered what it will from US assets and the Dollar. The Apple gap Wednesday morning following the previous evening's earnings and $75 billion share buyback plan was a welcome offset to the poor response to Google's numbers and other dull spots to the corporate reporting this past quarter. That said, what momentum we would have expected is likely already in place. Another theme of some greater significance is the progression on trade wars rhetoric. 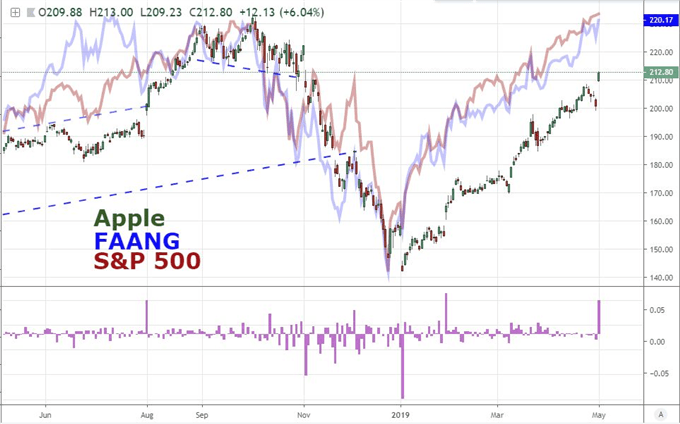 Yet another news report would come out - this time from CNBC - suggesting the US and China are on the verge of a compromise on their year-long trade war. We have seen this from a few other reports quoting unnamed sources but Chief of Staff Mick Mulvaney already established the practicality of this scenario some days ago. That draws a real concern on just how much lift confirmation can afford for the S&P 500 or Dollar.

The true potential for refreshed growth and market potential would come through the growth implications of a realization of the proposed $2 trillion infrastructure spending program that Congressional Democrat leaders and President Trump reportedly are working towards. That could offer genuine lift and fuel an advantage to US growth and assets. Yet, its implementation likely depends directly on the political environment going forward, and that is clearly fraught.

BOE is Top Event Risk With Limited Potential, Some Other Areas to Watch as Consolation

Looking further ahead, the combination of the April NFPs and ISM's service sector activity report on Friday is a significant combination of event risk. Anticipation alone will pull our attention forward and work as an anchor to productive drift until we reach the release. In the interim, top event risk Thursday will go to the British Pound. The Bank of England (BOE) rate decision scheduled for release at 11:00 GMT is of greater influence than typical owing to the Quarterly Inflation Report (QIR) that will accompany the decision to hold rates as well as Governor Carney's press conference to follow a half hour later. 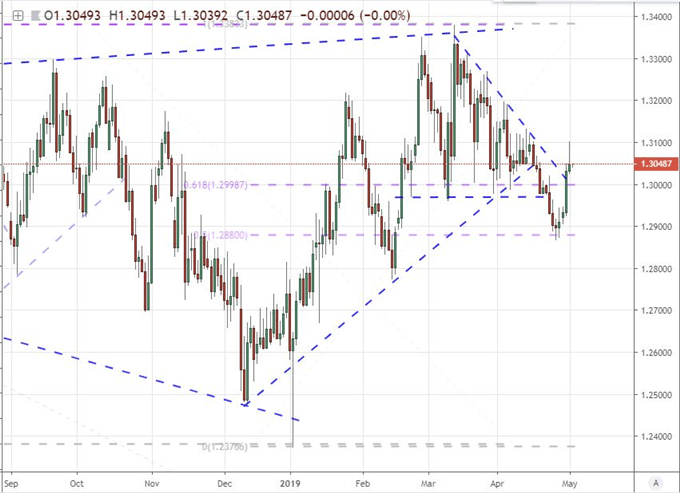 There is little chance that the central bank will be clear on its course for monetary policy given that the path of Brexit is still obscured. Between a no-deal, a split with unexpected access or second referendum outcomes, the implications for the UK are dramatically different. Where we are likely to see genuine progress is the accumulated economic and sentiment pain over the uncertainty in the future.

As the Dollar and Sterling struggle for traction, there are different bearings for the other majors. The Euro is without a clear bead for fundamental influence, which can open the door to themes that are otherwise victim to distraction - like political stability and monetary policy speculation. The Japanese Yen is another currency without a known spark over the next 48 hours, but its thinned liquidity during Golden Week can charge unexpected and extreme volatility.

The Canadian Dollar stirred to life this past session, but the disappointing turn from the manufacturing PMI and lacking enthusiasm from BOC Governor Poloz for a second half economic rebound probably didn't secure much conviction one way or the other. Pairs like AUDCAD, NZDCAD and CADCHF should be considered for their clear technicals. I am also keeping very close tabs on the Swiss Franc. The Dollar's rebound stalled a very interesting USDCHF reversal, but the potential behind the Swissie runs deeper. We discuss all of this and more in today's Trading Video.