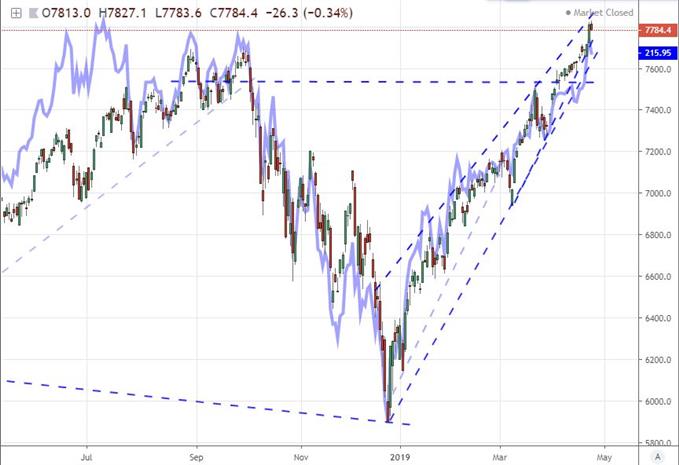 Watch Nasdaq Versus Dow On US Open, Dollar Earns Its Break

Do you trade on fundamental themes or event risk? See what live events we will cover on DailyFX this week (Friday’s US GDP) as well as our regular webinar series meant to help you hone your trading.

The first quarter US earnings season hit full stride this past session with reports from key companies. The size of the corporations themselves makes the list important for investors and the closely related economic forecast. However, the implications for particular groupings of companies represents far greater insight into our future than even the top market cap stock could offer by itself. With over 200 firms reporting their performance, the first perspective to evaluate is the most rudimentary: speculative leaders and laggards. Starting with the latter, the healthcare sector has come under the greatest pressure these past weeks, so Anthem's (ANTM) figures would draw atypical interest from the macro crowd. As it happened, their numbers were better than expected; so the threat of the banner bearers for the bears drawing greater scrutiny eased. On the other end of that speculative spectrum, the tech sector has maintained a comfortable lead and urged targeted markets ever higher even when risk was flagging everywhere else. Facebook's (FB) figures were steeped in caveats and Tesla's (TSLA) figures were simply bad, but these 'disruptors' have relinquished a significant portion of their responsibility for driving optimism lately - the FANG group is good evidence of this. Microsoft (MSFT) - the second largest public company in the world - on the other hand has climbed ever higher. Its quarter was impressive. These tech updates hit the wires afterhours Wednesday evening, so now the attention should be on the Nasdaq's open Thursday. Market's will decide their take and conviction, and keep the after-hours Amazon (AMZN) and Intel (INTC) releases in mind.

Chart of Nasdaq and FAANG Index in Blue (Daily)

Nasdaq this past session took a notable pause in its pace-setting advance to record highs. Though it was only a modest step back, the index did avoid a fresh record high through Wednesday's close. The question should be raised: what happens if this tech-leveraged index start sinking? The Nasdaq has clearly outpaced the broader S&P 500 - which once again failed to set a new intraday record - while the blue-chip Dow is still leering at record highs while just out of reach. US equities are themselves far outpacing global stocks, emerging markets, junk bonds, carry trade, and most other major asset classes. And so, the other fundamental issues stalking investors' concerns should be evaluated through the earnings run Wednesday. Growth and trade wars in particular is of considerable interest. Industrial machines manufacturer Caterpillar (CAT) and airplane maker Boeing (BA) would tap both themes. CAT beat earnings per share estimates by 9 cents (at $2.94) but the concerns over trade wars and economic concern with China's economy slowing highlighted specifically bearing a poor omen for general conditions. Boeing meanwhile was evaluated largely for the tragic technical issues for a particular model, but we shouldn't forget that they are at the middle of a recent threat made by President Trump to apply $11 billion in tariffs on EU products in retaliation for subsidies paid to competitor Airbus. US 1Q GDP is due on Friday for a data grounding for growth concerns while trade wars is an ever-unfolding plague.

Chart of Ratio Between Nasdaq and S&P 500 (Daily) 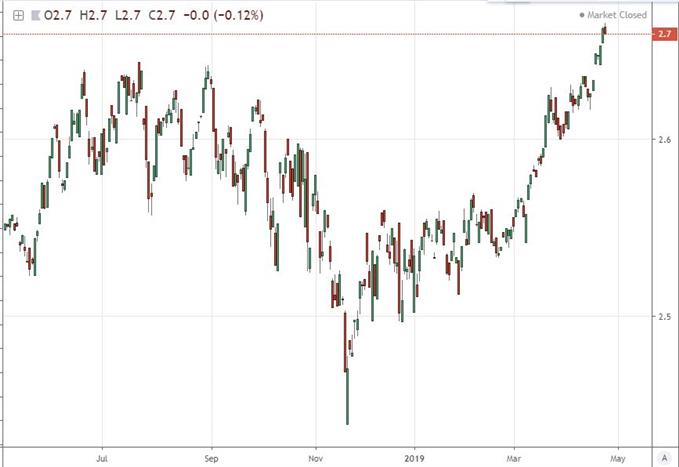 There is No Mistaking It: Dollar Broke Resistance

From systemic themes and the state of general risk trends, we turn to the world's most liquid currency: the US Dollar. We have watched this currency make repeated attempts to jump start a bull trend sidelined for months...and repeatedly failing. Following three clear and differentiated rejections from 97.75 resistance stretching back to November, the trade-weighted ICE Index finally broke to highs not seen since May 2017 this past session. There is little disputing the commitment to the Greenback's progress. My equally-weighted Dollar index realized a similar undisputed break to its own highs (which stretch back to January 2017). From its major crosses, the EURUSD's tumble below 1.1200 was remarkable as it reflects intent of the Dollar against its most liquid counterpart - and slowly lifts us from measures of the narrowest medium-term range (40-week) since the extremes of Summer 2014. A similar USD charge was earned through GBPUSD, USDJPY and AUDUSD; but progress was far more restrictive. There are times when a technical breach from a particular measure doesn't generate the same degree of enthusiasm from its components or alternative measures, but this is not one of those cases. That said, one of my personal approaches to the market's still holds: a break does not ensure follow through. 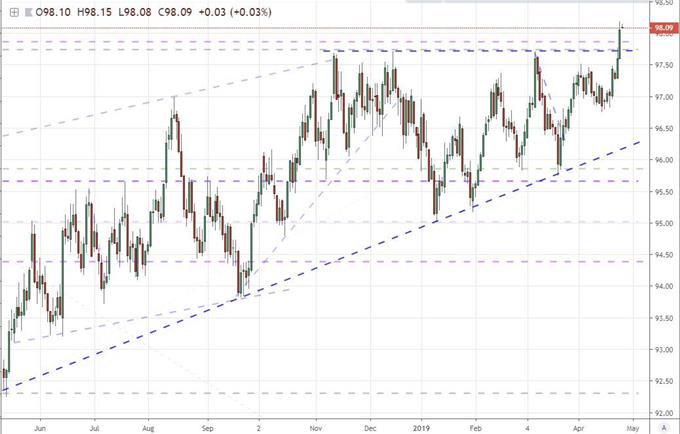 While there is little mistaking the technical break marked this past session, follow through for a wholesale breakout - much less committed trend - will require more than just the attention afforded to the breaking of a noteworthy level. This is not an environment where a chart-based move inspires an avalanche of repositioning. In fact, trend development is the rarity nowadays. If we are to see the benchmark currency capitalize on the progress made thus far, we will most likely need to find a fundamental lightening rod to draw speculative intent. What is motivating the USD to its current charge? There is little support to draw from relative monetary policy which is still significantly deflated from its peak 8 months ago. US indices are clear evidence that there is no panic revitalizing the Greenback's ultimate havens status. Relative growth advantages for the US economy are also suspect given the downgrades in forecasts from reliable third-party observers (like the IMF and WTO). And, for those that continue to harbor belief that the source of trade wars can somehow benefit from the growth crippling policies, there is no convincing of the practical circumstances. So, where is the Dollar's appeal originating if all of these outlets are lacking? As the most liquid currency in the world and a last-resort haven, there is an innate appeal for the Greenback when market participants flee other regions. With the Euro, Pound, Yen and Aussie all under pressure; that leaves only one liquid alternative. Having identified that motivation however, it is important to ask ourselves how long we believe the pressure can last. 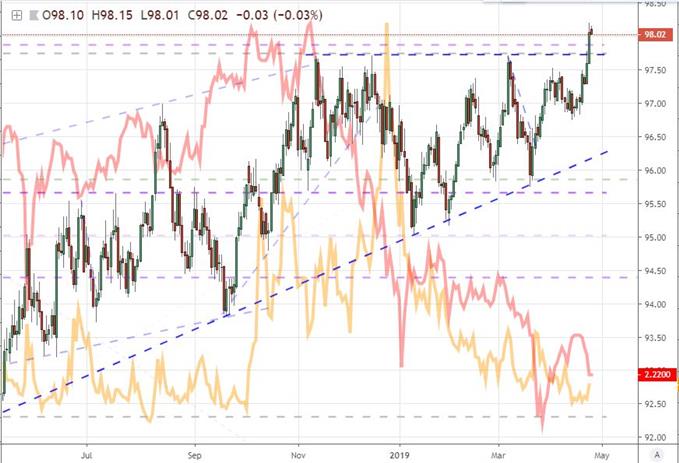 With the Dollar putting in for important technical developments, it is easy to lose sight of the key counterparts. Yet, as mentioned above, the US currency's movements are more likely borrowed from the deeper speculative commitment of its major counterparts. Working down the line of liquidity, the Euro was notably lacking for fundamental motivation Wednesday. The docket offered up German business sentiment (IFO) which reported an unexpected contraction last month with a reading of 95.2. The ECB's economic bulletin was itself interesting with stated concern over the impact of trade wars. That is still nothing new to regular Euro observers. As routine as the event risk may have been this past session, the result was still a critical break from EURUSD below 1.1200 - the 61.8% Fib of the late-2016 to early-2018 bull trend and the same Fibonacci sequence from the pairs historical range from 2000 to 2008. As long-overdue as this bearish break seems, there isn't a strong fundamental wave to keep it running. Meanwhile, GBPUSD is still moving at the behest of Brexit updates. With Parliament back in session, it is clear that Prime Minister May's own government is raising pressure on the leader to time her exit while commitment to the next steps necessary to extend negotiations to late October are flagging. From the Yen crosses, the natural interest is to follow risk trends via the carry trade course. However, the Bank of Japan (BOJ) rate decision adds a new facet to the familiar landscape. The group is unlikely to alter course, but further easing would be the more likely outcome should change prove necessary. Making clear the limitations of the BOJ's influence against the backdrop of a troubled financial system would be an unnecessary risk to take.

In contrast to the restricted core 'majors', there was more remarkable movement to be registered amongst the second leg, most liquid currencies. The Australian Dollar came under severe duress this past session following the release of the first quarter (1Q) consumer inflation (CPI) data. An important proxy for the RBA's plans, the headline figure dropped to a 1.3 percent pace (from 1.8) while core price pressures dropped back to 1.6 percent. While there were no rate hikes seen from the Aussie central bank through the foreseeable future, this news raises the probability of a cut from the group at next month's meeting to near 50-50. Another quality movement outside the norm would come on behalf of the Swiss Franc. There was little on the docket the could reasonably be relied upon to move markets and there is spotty potential moving forward. Following it steady tumble through the past weeks, the currency finally put in for a significant rebound - its largest since February 28th when measured as an equally-weighted index. That would lead to a remarkable move from EURCHF and amplify the drop from the likes of AUDCHF. This is a currency that is more obviously playing the foil to active counterparts, so assumption of innate trends are held low. Learn what is most important for the session ahead, in today's Trading Video. 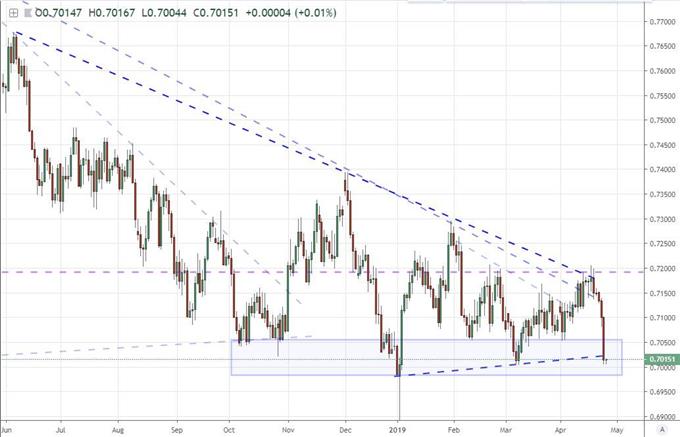